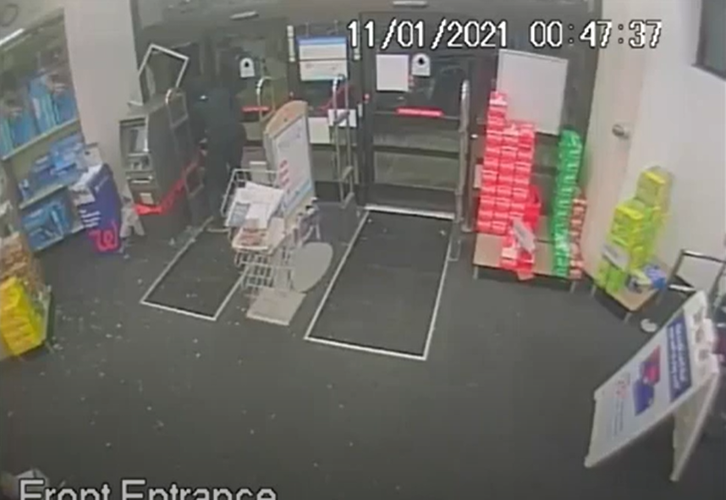 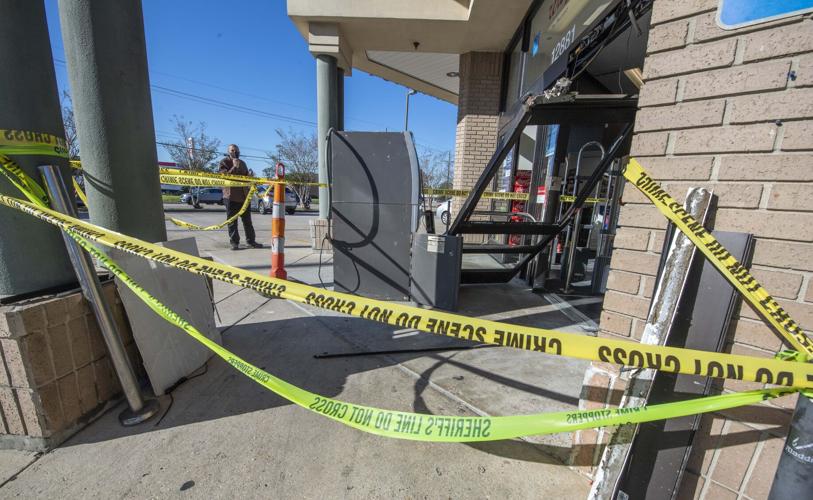 On their way inside, a customer looks over the results of an attempted ATM theft in the early morning hours at Walgreens Pharmacy, located at 12881 Perkins Road, Monday Nov. 1, 2021, in Baton Rouge, La. The East Baton Rouge Parish Sheriff's Office responded to the attempted theft at the business located at the corner of Perkins Road and Siegen Lane.

Three people tried unsuccessfully to steal an ATM from a Walgreens at the corner of Perkins Road and Siegen Lane early Monday. They got as far as the parking lot.

An anonymous caller contacted authorities close to 1 a.m. from a nearby Jack in the Box parking lot saying she saw three people in a truck attempting to steal an ATM from inside the pharmacy across the street, East Baton Rouge Parish Sheriff's Office spokesperson Casey Rayborn Hicks said.

When deputies arrived, they discovered the front glass doors of the building had been smashed and the ATM was sitting in the middle of the parking lot with two large, red straps attached to it.

All three suspects had fled the scene about two minutes prior to authorities arriving, according to surveillance footage obtained by the sheriff's office. No money was stolen from the ATM, Hicks said.

An industry spokesman said automated teller machines are designed in a way to either prevent their destruction or to taint the bills inside to make them worthless. The machines are also quite heavy and it appeared on video the three would-be thieves couldn't lift the one that had been stationed just inside the Walgreens' glass doors.

The failed theft attempt at the Walgreens took about five minutes, the video shows. Three suspects arrive in a dark-colored truck around 12:46 a.m. One of the suspects shatters the front door with a blunt object, while a second person climbs through and loops a strap around the machine, the video shows.

The third person then pulls the ATM out of the store with the truck. Footage shows the ATM suddenly disappear through the broken window as the truck drags it into the parking lot.

The three suspects tried but fail to hoist the ATM into the back of the truck before abandoning their efforts, the footage shows. As the truck backs up, it knocks over the ATM before speeding away.

A dark, old pickup truck with a gray panel at the bottom can be seen pulling away from the scene by 12:50 a.m., leaving the ATM behind.

The truck drove away on Perkins Road and had not been located Monday. Authorities have not released further details about the suspects.

There have been no other attempted break-ins or break-ins at the Perkins Road Walgreens this year, Hicks said.

It's difficult to determine how prevalent ATM theft actually is across the United States, according to David Tente, the executive director of the ATM Industry Association in the USA, Canada and the Americas.

Until media outlets cover thefts reported by law enforcement, those numbers are often kept hard to come by.

The organization recently launched a global ATM crime database for ATM employers and law enforcement to report incidents. The database has been active for a few months and already 5,000 incidents have been reported globally.

"If you have the right tools, it’s not a terribly big task to get inside the vault, but you also have to know what you’re doing and try to approach it," Tente said.

Still, there are a host of security measures in place to make sure that this doesn't happen.

Vaults are usually "built to withstand attacks and physical prying, grinding and drilling," he said, with sophisticated electronic locks. ATMs can have GPS devices attached with an alarm triggered if the machine is moved, so authorities can locate it quickly.

In some ATMs there is even a device that stains the bank notes with ink if the machine is moved or tilted, rendering the bills useless.

ATMs can vary in weight, depending on what level vault is inside, but Tente said it's safe to assume "they're not light — it’s not something an individual could typically get up and carry around, even if they were pretty strong."

Often they are bolted to the floor or attached to a wall to prevent them from being moved in the first place.

"This is the kind of thing we see usually pops up — there will probably be more attempts," Tente said. "Maybe the same crew will go out fairly soon and try to do this again."