A still image from surveillance video showing the moment Eric Nelson's head struck the pavement after he was pulled from a police vehicle outside of the Bogalusa Police station in the hours before his death in December, 2021. 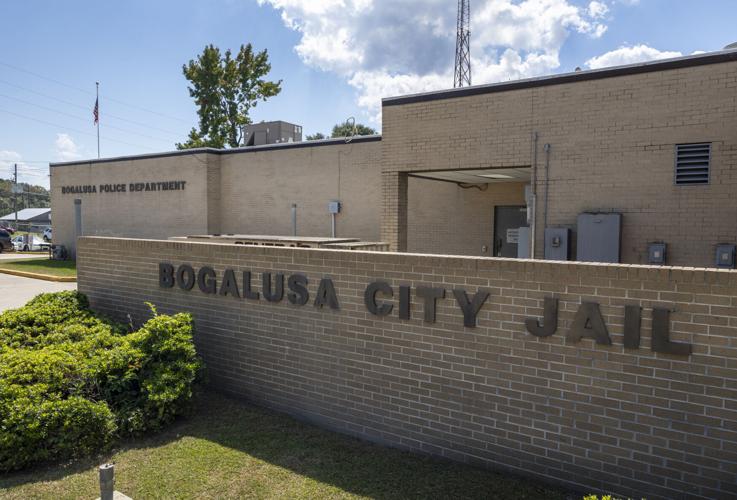 The Bogalusa Police Department and city jail on Thursday, October 6, 2022. (Photo by Chris Granger | The Times-Picayune | The New Orleans Advocate)

A new federal lawsuit accuses Bogalusa police and Washington Parish deputies of violating the civil rights of a 28-year-old man who died late last year in police custody and of lying to cover it up.

Deputies responded to a single-vehicle collision about 11 a.m. on Dec. 19, 2021, and found Eric Nelson Sr., who had crashed his Chevy Malibu into a ditch. Nelson had outstanding warrants out of Bogalusa for drug crimes, according to a preliminary Louisiana State Police report summarizing what happened.

According to a lawsuit filed Tuesday, an officer drove to Nelson's Bogalusa home so Nelson could change shoes before heading to jail. The lawsuit says Nelson ran into the woods, crossed a stream and dove “into undergrowth, where he was tased by police and taken into custody,” the suit states. State Police's initial report said Nelson complained of being tired and short of breath on the ride to jail.

Video from the parking lot of the Bogalusa police station, reviewed by The Times-Picayune | The Advocate, shows two police SUVs pull up as a man in plain clothes walks out of the building. Within a half-minute, the man is at the SUV and leans in to the vehicle several times to pull Nelson's legs toward the driver's side rear door.

Eventually, after a strong tug, the Black man tumbles limply out of the SUV and lands on his handcuffed hands at the White man's feet. Nelson’s head drops to the concrete and he stays there limp before the man from the building and a police officer drag him by his arms to the entryway. They leave him there, and an ambulance rolled up five minutes later.

“For five critical minutes,” the officers “do nothing as Nelson lays dying on the pavement,” the lawsuit says. It alleges that police also gave EMS bad information, claiming Nelson was walking when he collapsed.

The lawsuit also says that, after the tasing, Nelson should have been taken to a hospital first, in line with Bogalusa Police Department policy.

Ashley Heiberger, a police practices expert and retired police captain in Pennsylvania who reviewed the parking lot video at the request of the newspapers, said officers appeared in the video to take some steps to provide Nelson "reasonable care" — like repeatedly moving him to keep him upright after taking him out of the vehicle.

They also appeared to check his responsiveness via a sternum rub, a technique used to assess an unconscious person's reaction to painful stimuli, said Heiberger, who reviewed only the parking lot video and not other documents in the case.

Bogalusa Police Chief Kendall Bullen declined to comment on the lawsuit, saying he hadn’t yet seen it. He also declined to say if it was police officers or sheriffs' deputies who tased Nelson, saying he hadn't seen the results of a State Police investigation.

Northshore EMS records attached to the lawsuit show medical workers arrived to find Nelson in handcuffs on the ground, unconscious and gasping for air.

The notes say that Bogalusa police told paramedics the suspect “suffered no trauma upon arrest" and collapsed "while being walked from patrol car to jail." Nelson died that night at Our Lady of Angels hospital in Bogalusa.

Kenyatte Spikes, the mother of Nelson’s minor son, filed the lawsuit on the child's behalf. It names the city of Bogalusa and several officers, along with two Washington Parish deputies and Sheriff Randy "Country" Seal, who said Wednesday he wouldn’t comment on a pending lawsuit.

It claims Nelson suffered brain swelling, face and neck injuries, and other trauma. It alleges the officers and deputies used excessive force or failed to intervene, then tried to cover it up. The suit, filed by attorney Joseph Long, does not specify the amount of damages being sought.

Assistant District Attorney Andrew Joyner, said Wednesday the case remains under review. State Police typically investigates deaths that occur during arrests by local law enforcement agencies in Louisiana, then forwards its finding to local prosecutors to determine whether criminal charges might be warranted.

Aside from an initial scene report which State Police released in March in response to a records request by The Times-Picayune | The Advocate, authorities have released few details about Nelson’s death.

The lawsuit notes that Nelson was in good health at the time he died, with medical records showing he had no past medical or surgical history, and a preliminary drug screen detected marijuana but no other drugs.

Shortly after Nelson died, Bogalusa police say he was wanted for resisting an officer, several drug counts and a traffic violation.

He had previously spent five years in prison after reaching a plea deal on a drug charge. He had been charged with possessing cocaine with intent to distribute and a firearm possession charge, but pleaded guilty to attempted possession in 2013.