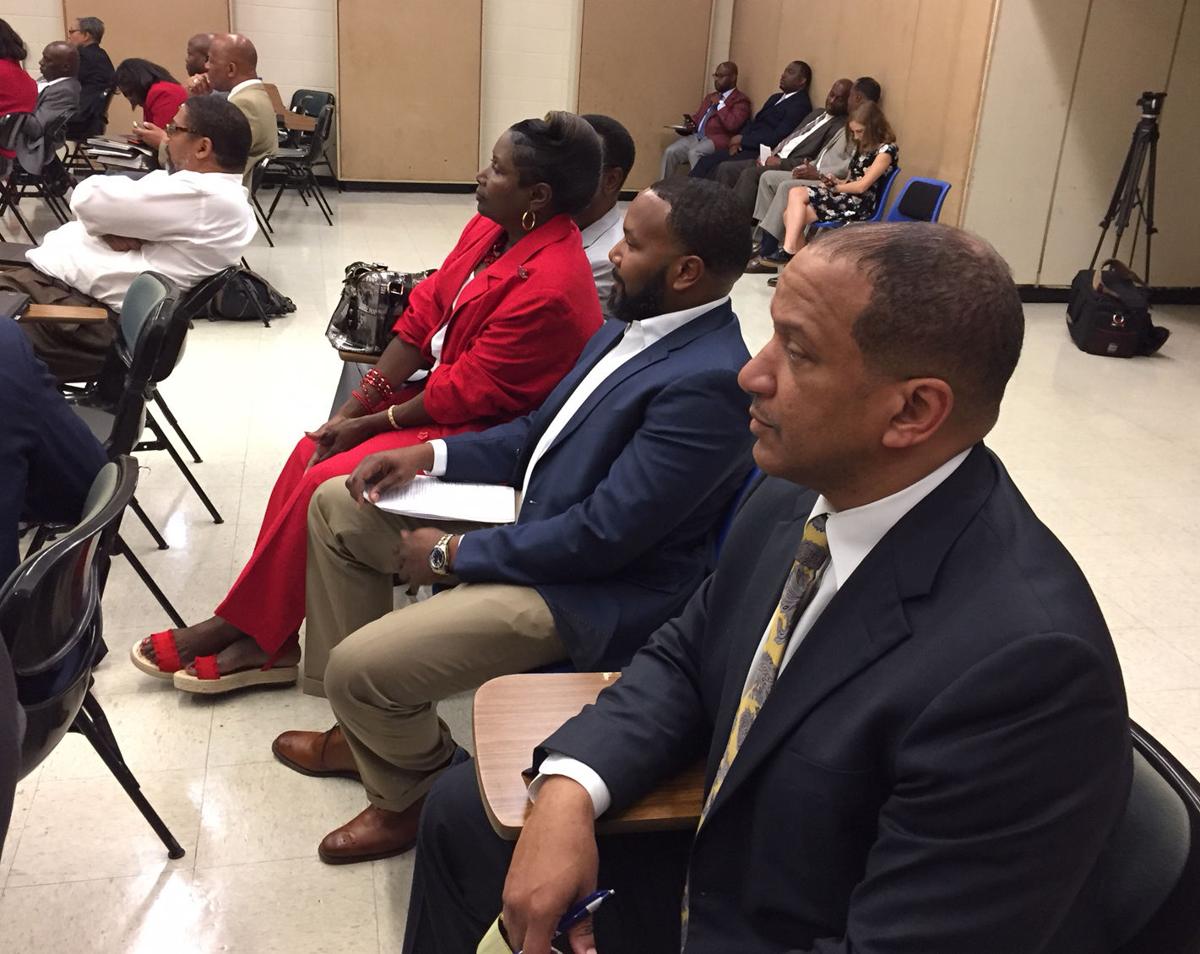 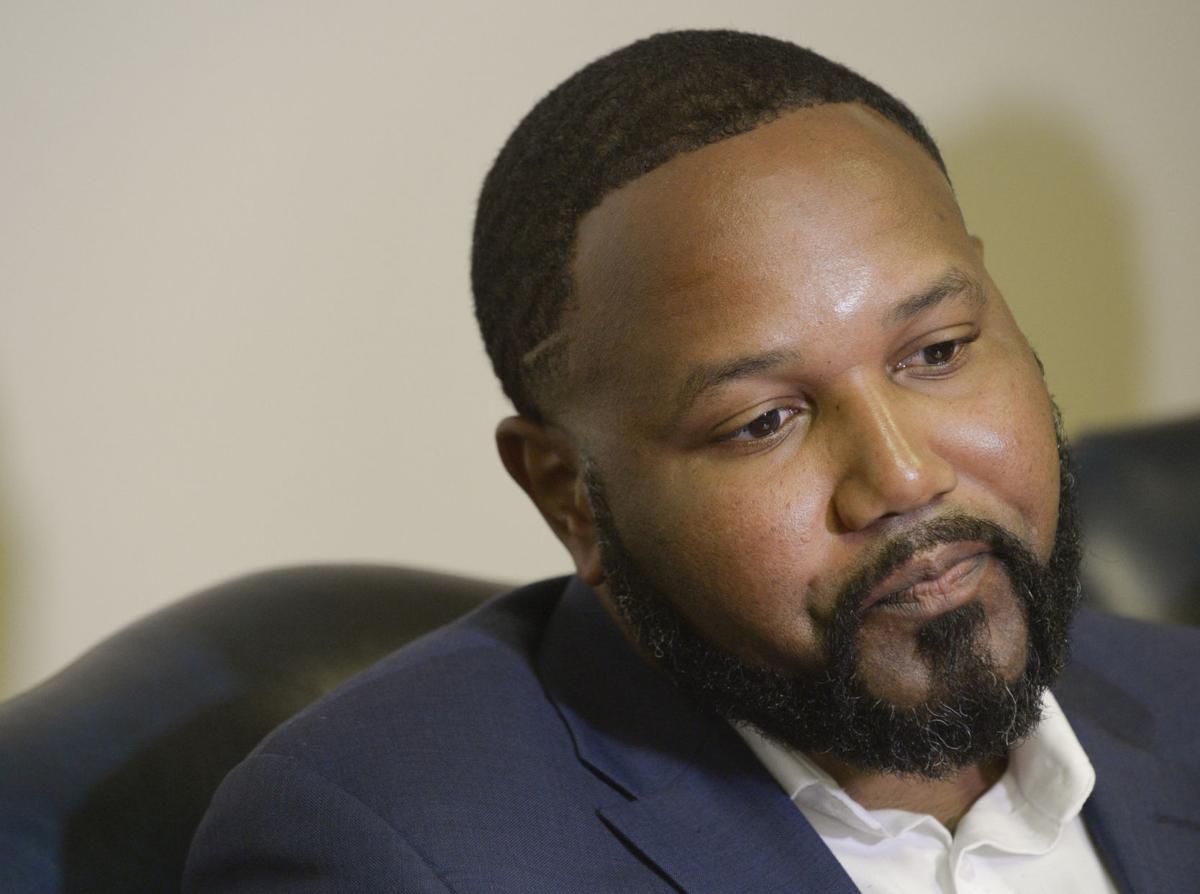 Former Director of Bands at Southern University Nathan Haymer listens as his attorney, Karl Bernard, speaks on his behalf during a press conference, Friday, August 10, 2018, in Baton Rouge, La.

Former Director of Bands at Southern University Nathan Haymer listens as his attorney, Karl Bernard, speaks on his behalf during a press conference, Friday, August 10, 2018, in Baton Rouge, La.

SHREVEPORT – After meeting behind closed doors Friday for about two hours, the Southern University Board of Supervisors upheld the firing of former band director Nathan Haymer.

Haymer's team made a last-gasp bid to save his job by getting 60 days to produce evidence they hoped could undo the firing.

The vote was 6-5 in favor of the motion, but it needed nine votes on the 16-member panel.

"I have zero comment," Haymer told a reporter on his way out of the meeting room.

An audit by the Southern University System has questioned why about $300,000 in band camp and other fees ended up in Haymer's personal bank accounts.

Audit: Why did $300K in Southern band fees go to personal accounts of former director?

An audit by the Southern University System is questioning why about $300,000 in band camp and other fees wound up in the personal bank account…

The findings have been turned over to East Baton Rouge District Attorney Hillar Moore III and Legislative Auditor Daryl Purpera.

His attorney, Karl Bernard, of New Orleans, said earlier this month that the money was in Haymer's accounts because he was directed to do so by university officials.

An attorney for former Southern University band director Nathan Haymer said Friday about $300,000 in band camp and other fees ended up in Haym…

The money was then supposed to pay for band equipment and other supplies, he said.

Bernard said that, while the arrangement was unusual, his client is not guilty of any malfeasance or intentional wrongdoing.

School officials said at the time that Haymer had ample opportunity to make his case.

Bernard made a 15-20 minute pitch on behalf of his client during the board's closed-door gathering. But he was not optimistic afterwards and noted that it is hard to override a decision by the system president, who is also chancellor of the Baton Rouge campus.

"We are going to continue to exhaust our efforts to demonstrate to the board that Mr. Haymer deserves a second shot," Bernard said moments after the meeting.

Belton did not speak during the public portion of the meeting and could not be reached for comment afterwards.

In a prepared statement Janene Tate, director of communications for the Southern University System, noted that the board did not grant Haymer's appeal.

"As a public university employee, he has a right to appeal his termination and now it is final," Tate said.

"Southern University is committed to continuing to support  our band program on and off the field," she said.

The panel had already met for about four hours when it reached the band topic.

It then quickly went into special session, clearing the room of board staff and other school officials.

The gathering then resembled a courthouse awaiting a jury verdict.

Officials milled in meeting rooms and hallways while the board discussed the case behind doors blocked by campus security.

Haymer was accompanied by his brother Niles, also an attorney working on the case, and his mother Patricia Haymer Rodgers.

The motion to give Haymer's side 60 more days to make his case was made by board member Tony Clayton.

The aim was for supervisors to then tackle the issue when they meet later this year.

Bernard said earlier Haymer was willing to accept some form of punishment if he could regain a role with the band, known as the Human Jukebox.

The audit came out after Haymer was fired on May  1 following allegations that he sought kickbacks for the Southern University band to appear at an even for schoolchildren.

Southern University fires popular band director, he says he is disappointed with decision

Ending days of limbo for its band director, Southern University on Tuesday fired Nathan Haymer, bringing his leadership of the famed Human Juk…

He denied the claim.

The audit was sparked by questions that arose after the initial controversy.

The report said that, while about $300,000 in band camp and other fees was found in Haymer's bank accounts, about $74,000 was accounted for.

Officials are trying to account for the other roughly $226,000.

Haymer's firing triggered controversy on the Baton Rouge campus, and an outpouring of support from current and former band members.

Members of Southern University's famed Human Jukebox crowded into the Southern Board of Supervisors meeting Friday, pleading the case for thei…

Earlier in the meeting Julian Jackson, who lives in New Orleans, urged the board to overturn Haymer's firing.

Jackson, a member of the Southern University marching band in the late 1970's, said today's band has new instruments and new uniforms because of Haymer's leadership, and without assistance from the school.

Jackson said, "I am asking this distinguished board to be fair and open minded. Mr. Haymer deserves an opportunity to do what his passion is. That is leading the Southern University marching band."