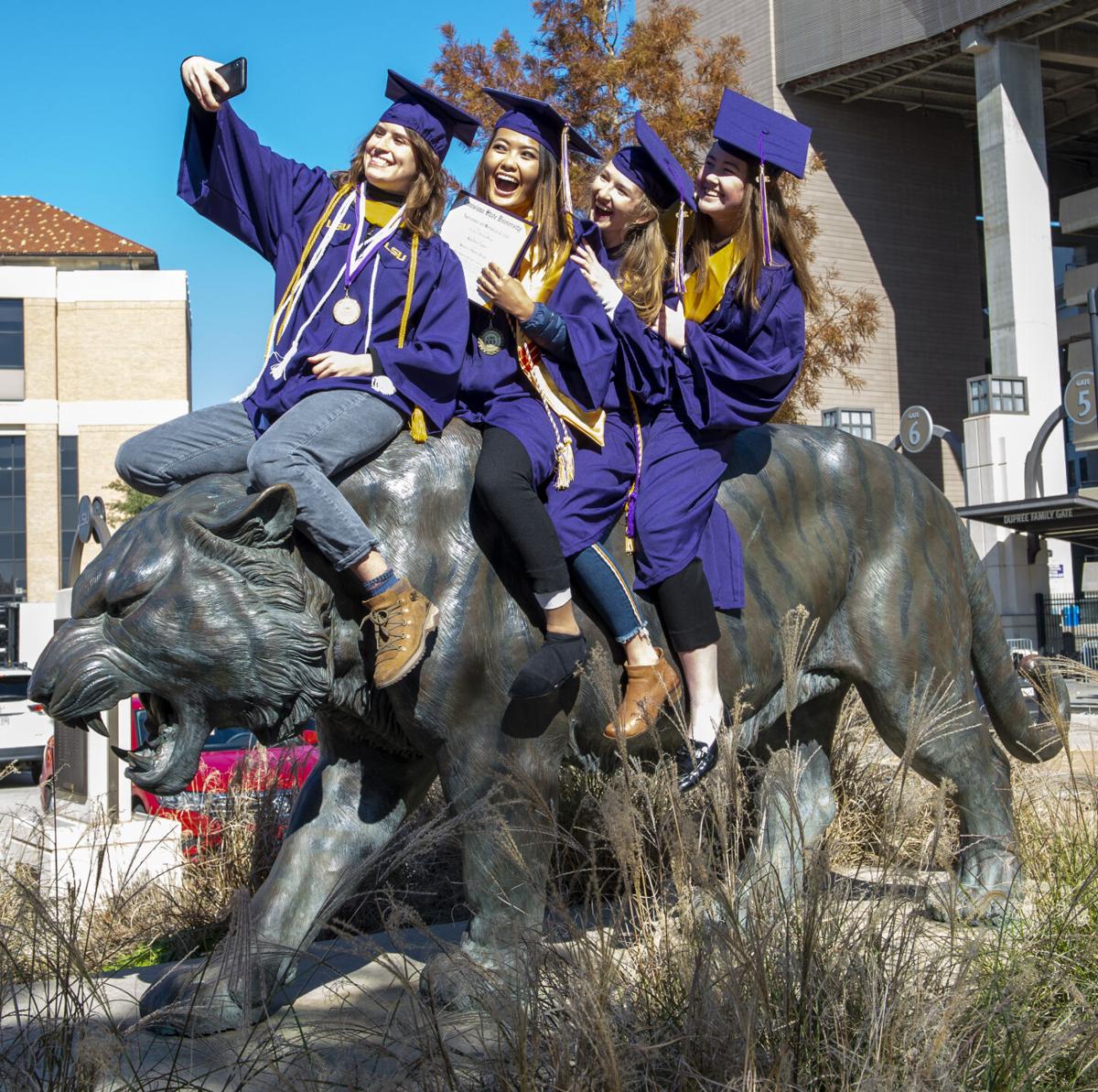 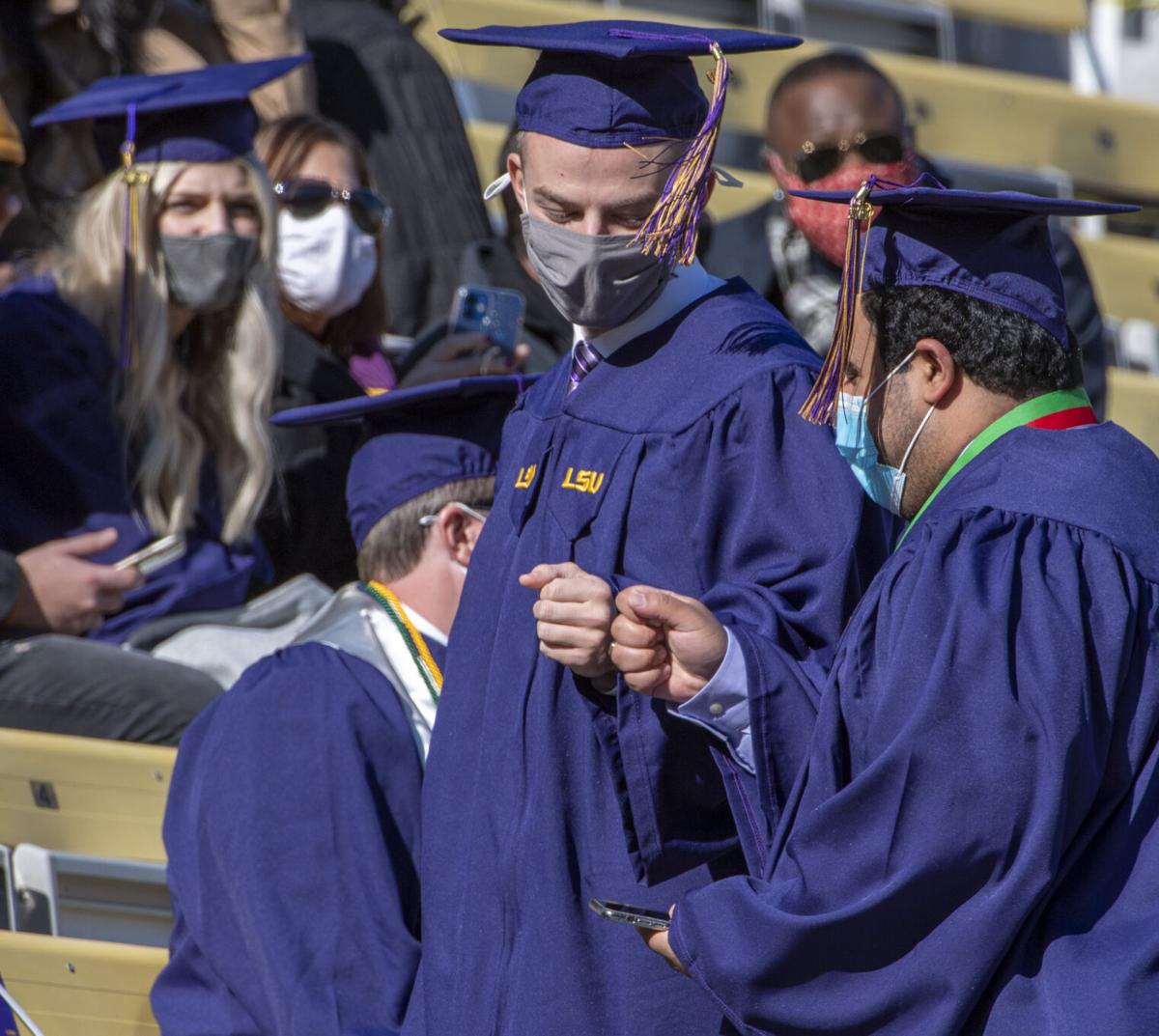 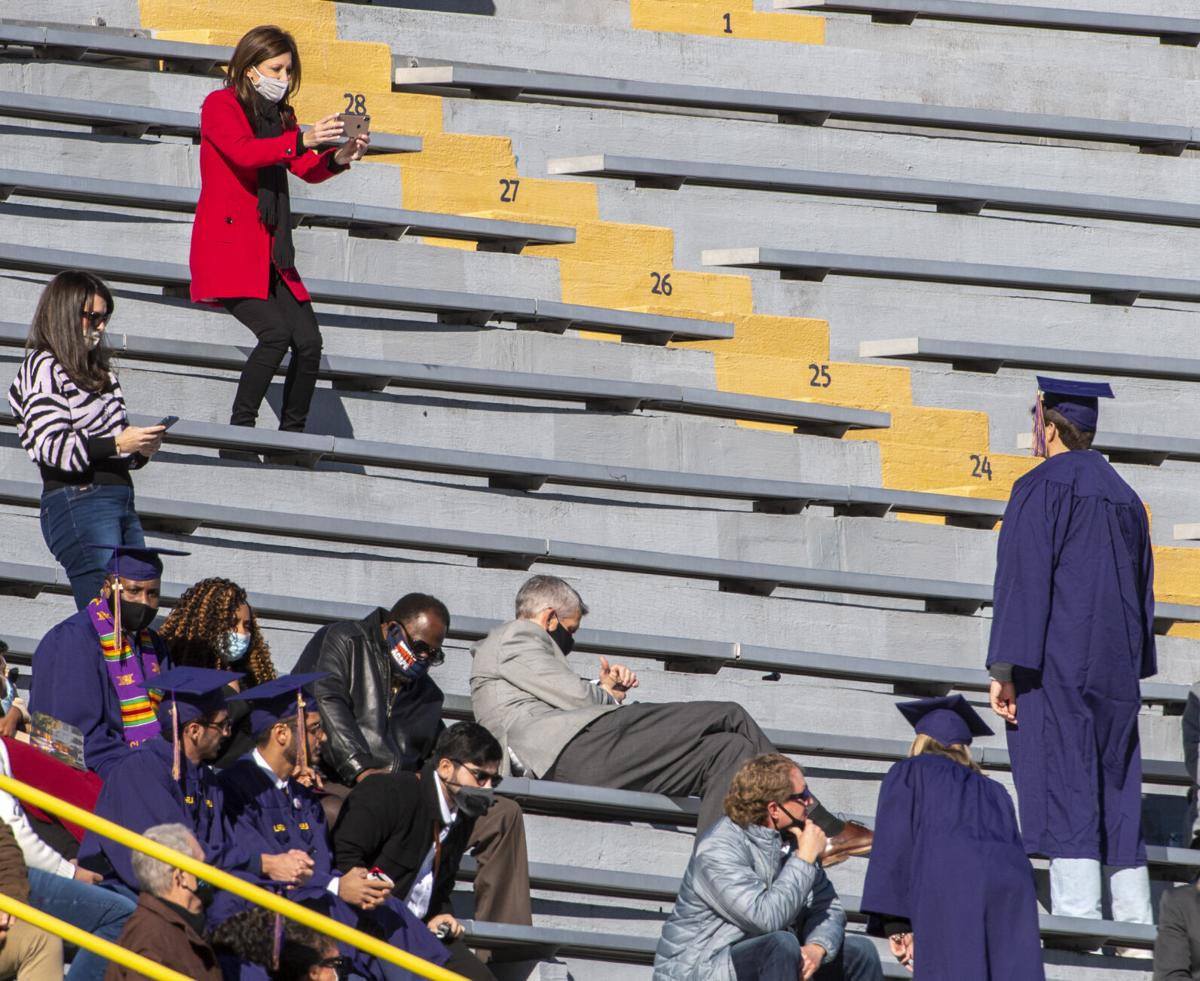 An LSU graduate stands for a photo in the north end zone as about 2,000 students graduated in person at Tiger Stadium Friday December 18, 2020, in Baton Rouge, La.

An LSU graduate stands for a photo in the north end zone as about 2,000 students graduated in person at Tiger Stadium Friday December 18, 2020, in Baton Rouge, La.

Braving the cold temperatures, at least for Louisiana, LSU graduated its largest fall class ever under clear skies during an in person, outdoor ceremony Friday.

LSU Tiger Stadium was used for graduating students in 1990 when Ronald Reagan, about a year past his two terms as president, talked about the fall of communism in his commencement address.

Referring to Reagan's visit, LSU leader Tom Galligan told the 1,966 graduates that this time, they’d have to listen to an interim college president – “a bald one at that” – but that the Fall 2020 class would be remembered for the obstacles put up by the COVID-19 pandemic, which caused the university to close briefly.

“We are really here,” Galligan said, starting his 14-minute speech, acknowledging how disruptive the pandemic made the final year of the graduates’ studies. “We made it.”

Spread out on one side of the football stadium and wearing masks under overcast skies, about 450 Southern University Baton Rouge students  Fri…

His comments reflected the COVID-19 reality on the graduating students, isolated and sitting socially distant apart on the west side of Tiger Stadium. They and their families were temperature-checked upon entering and wore masks. No printed programs were handed out.

Graduates didn’t walk across the stage to receive diplomas. But their names were displayed individually on the stadium scoreboard throughout the day.

The graduating class completed their studies with a mixture of in-person and online classes.

“I ask you not to focus on what this pandemic has taken from you, but what you can take from it,” Galligan said. “Terrible times are terrific teachers.”

“The class of 2020 is truly unique. There is no other way to put it,” said LSU Executive Vice President & Provost Stacia Haynie. “These graduates have persevered and faced first of their kind challenges throughout their academic careers.”

This UL grad says hard work, Nicki Minaj got him through school. She helped pay his tuition.

A UL student credits hard work, but also the generosity of a high-profile stranger, for getting him across the graduation stage, KATC reports.

“Right now, in this very moment, we are taking part in only the second commencement ceremony to ever occur in Tiger Stadium. Only the second — out of 303,” Galligan said, “which means that fewer than 1 percent of all graduating classes have had the great privilege of having their commencement held inside this most hallowed space … This cathedral of college football.”

Galligan was referring to the May 1990 graduation when Reagan spoke to 1,990 graduates (the traditional Spring events graduate more students than the Fall ceremonies) and 25,000 spectators after a banner protesting his budget cuts to education while in office was removed.

Reagan talked of his planned trip to view firsthand the results of the collapse of communism in Eastern Europe. He called for the independence of the Baltic republics, which happened in September 1991.

He and his wife, Nancy, also visited the TKE fraternity house to pose for pictures and sign autographs.

UL grads weather a most unusual semester, prepare for ceremonies this week

David Allen, the University of Louisiana at Lafayette’s top graduate school graduate, said he’ll collect his diploma with some sense of relief…

President George W. Bush gave the May 2004 commencement address, but it was inside the LSU Maravich Assembly Center. He spoke about the importance of moral honesty and public service.