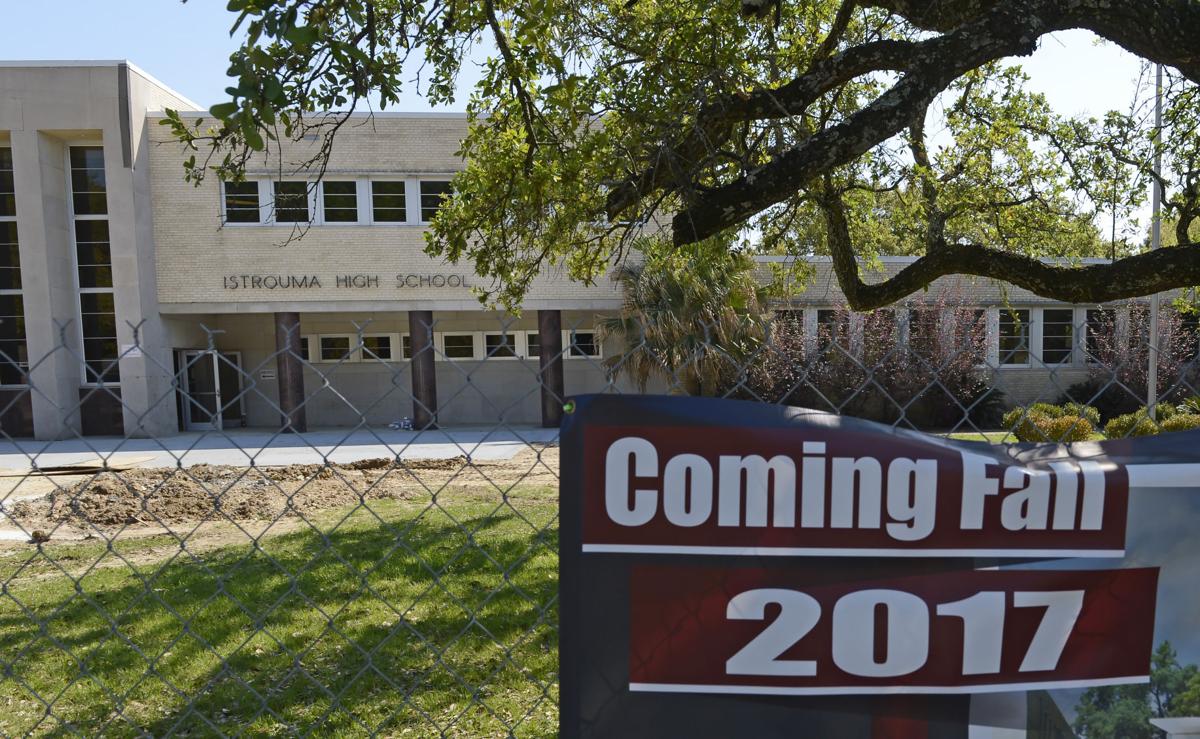 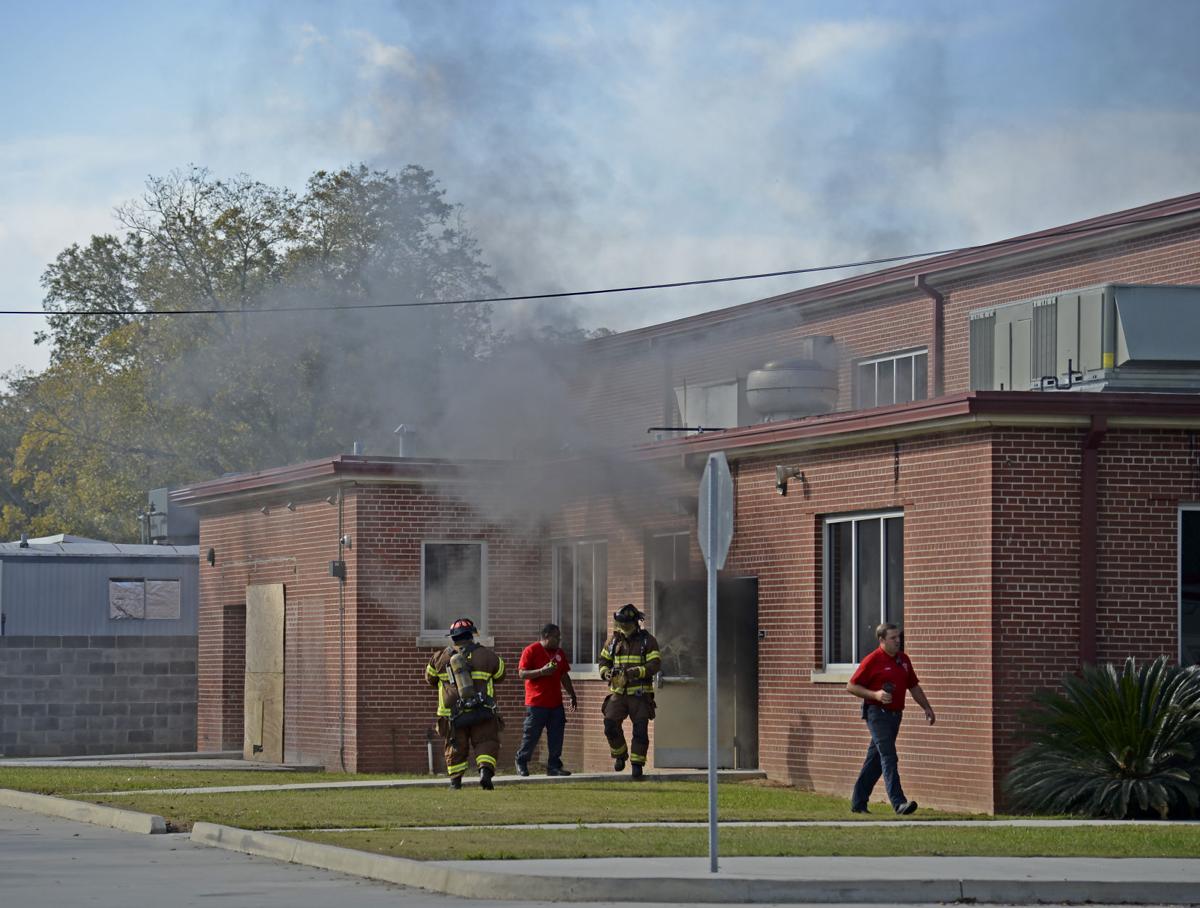 Firefighters with the Baton Rouge Fire Department battle a two alarm blaze that broke out at Brookstown Middle Magnet School early afternoon, Friday, Nov. 18, 2016, in Baton Rouge, La. The school had been closed since flooding in August.

Firefighters with the Baton Rouge Fire Department battle a two alarm blaze that broke out at Brookstown Middle Magnet School early afternoon, Friday, Nov. 18, 2016, in Baton Rouge, La. The school had been closed since flooding in August.

Istrouma High School is reopening Aug. 9, but its sixth-to-eighth-graders will spend the first semester of the new school year somewhere else, dashing hopes that all of Istrouma's students could arrive at the renovated north Baton Rouge school at the same time.

Adonica Duggan, a spokeswoman for the East Baton Rouge Parish school system, said school officials recently decided to delay the arrival of the Istrouma middle schoolers to avoid the possibility the high school work would be incomplete when the 2017-18 school year starts.

“We didn’t want the high school to be just 90 percent done,” Duggan said.

Istrouma High reopening plans coming into focus, with mix of programs on tap

With its reopening just over four months away, Istrouma High School is a beehive of activity…

The combined middle-high school will offer classes in grades six to 12. In year one, though, sophomores will be the oldest students on campus; the first graduating class won’t be until May 2020.

Like the school of old, the new Istrouma Middle Magnet school will have minimum academic admissions requirements and will serve as a feeder to the high school. Its initial 100-plus students will come from a pre-existing magnet program at Brookstown Middle School; magnet students account for about 40 percent of the children enrolled now at that school, located nearby in north Baton Rouge.

The original plan was to have those middle school students arrive at Istrouma in January, five months after the ninth- and 10th-graders. This spring, the arrival of the middle schoolers was moved up to August due to the progress the general contractor, Ruston-based Lincoln Builders, was making on the $24.1 million worth of repairs to the 3730 Winbourne Ave. campus.

Delaying their arrival again until January means Istrouma’s middle school students will have to find a temporary home. The most likely short-term locale is the former Eden Park Elementary School at 1650 N. Acadian Thruway East, Duggan said. The old school has played this role before, operating this past year as the temporary home for Park Forest Elementary School after that school flooded last August.

That’s quite different from the situation for the 170 or so traditional students who will remain with Brookstown Middle School. They are set to return Aug. 9 to their 4375 E. Brookstown Drive campus. That facility flooded last August and in November saw its cafeteria and gym torched in an arson. The school buildings are now undergoing $6 million in renovations.

Despite the repairs, Brookstown Middle’s future remains in doubt. Superintendent Warren Drake said he’s going to monitor its enrollment over the next couple of years to see that it grows to a more financially sustainable level; the school system prefers middle schools to have at least 400 students.

Enrollment at Istrouma High School is also a question mark, given that much of the area flooded in August. Reginald Douglas, who became its principal in April, told the School Board on Thursday that about 430 students have enrolled so far, including about 20 walk-ins over the past couple of weeks. The renovated high school will able to accommodate as many as 1,200 students.

With less than four months until it reopens, Istrouma High School in Baton Rouge finally has…

The high school is registering new students down the street at Winbourne Elementary until late July; by then Douglas expects to be able to start moving into the Istrouma campus. The Istrouma Middle magnet program is registering students at a different location: McKinley Middle Magnet School, 1550 Eddie Robinson Sr. Drive.

Even as their peers returned to work Thursday from summer break, teachers at recently repaired Istrouma High and Glen Oaks Park Elementary sch…

As she has on first days of school in years past, LaQuida Davis stood in her doorway Wednesday morning, hugging one child after another as the…

Since August, dozens of students at Brookstown Middle School in Baton Rouge have been raising catfish with a plan to use the fish waste as fer…

Three months after high school students returned to the shuttered campus of Istrouma High School, more than 100 middle schoolers are about to …