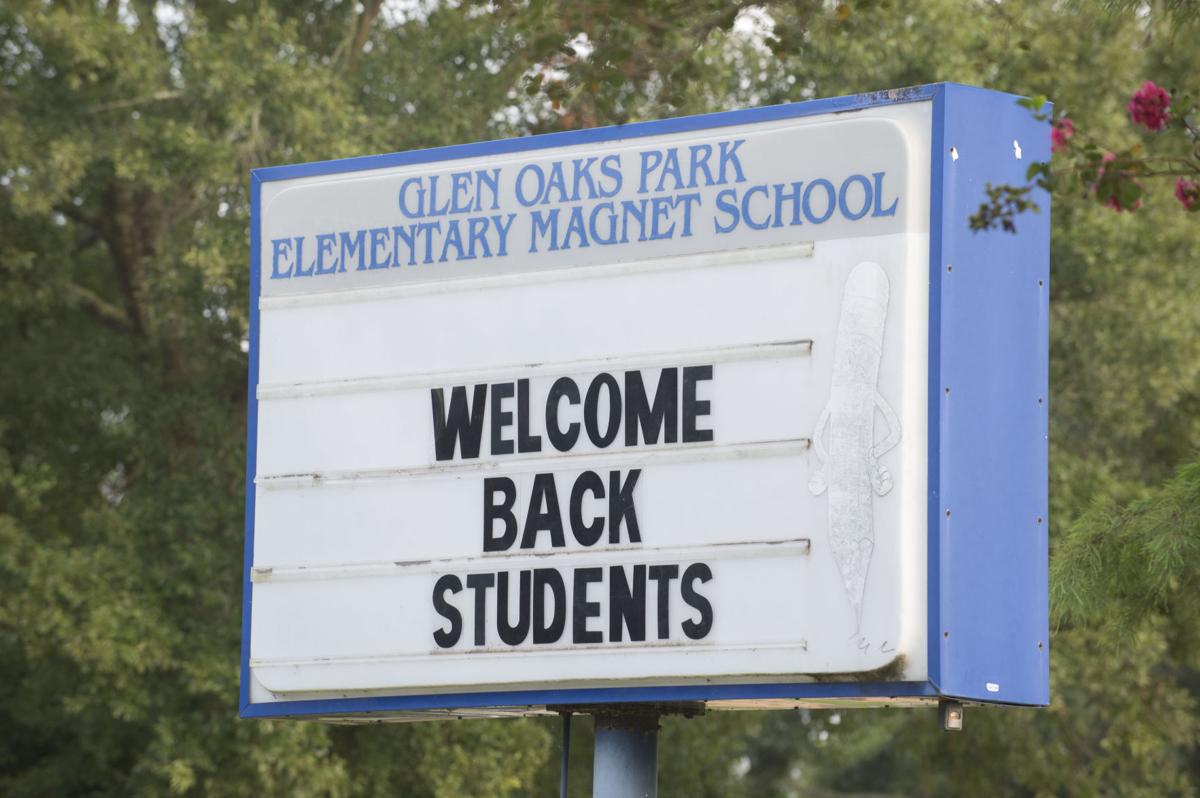 Welcome back sign on the first day of school at Glen Oaks Park Academic Elementary Magnet Elementary School on Aug. 9, 2017. The school was reopening after being flooded in August 2016. 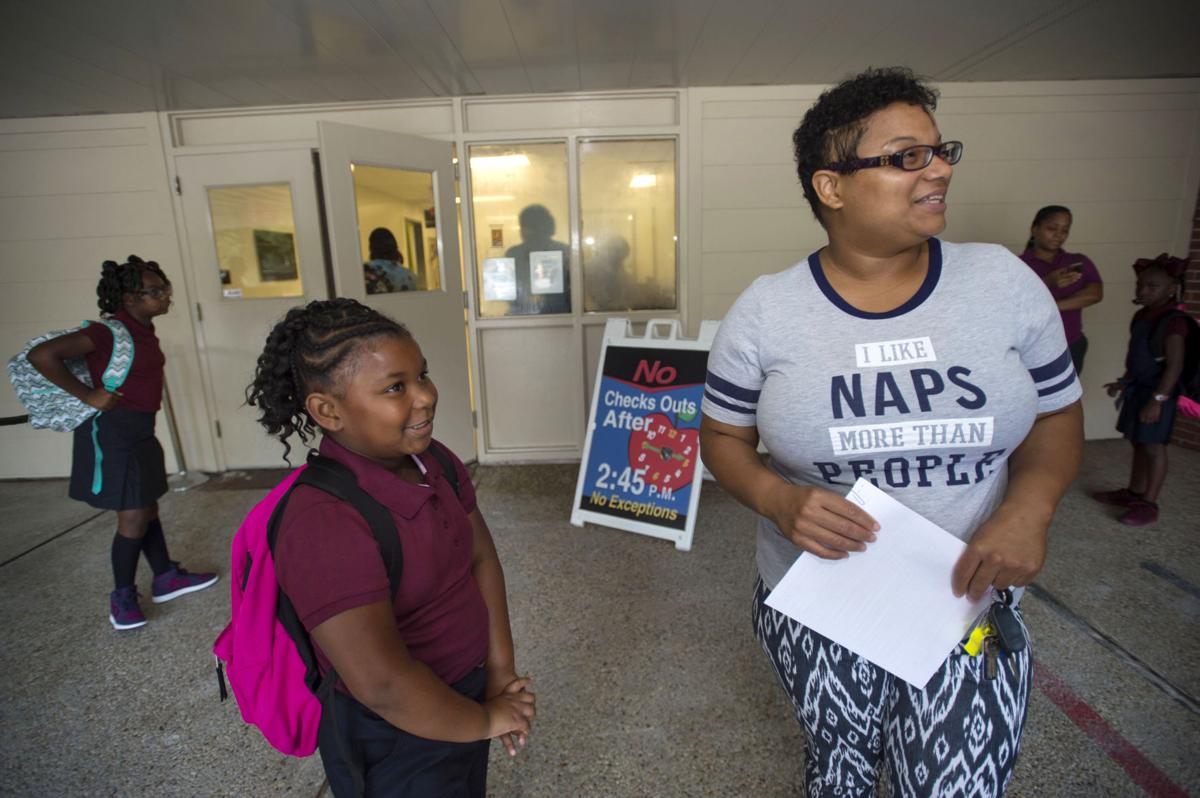 T'Shiya Sorrell, 8, left, and her mom Tiffine LeDuff, right, talk after arriving for the first day of school at Glen Oaks Park Elementary School on Aug. 9, 2017. Darmicia Williams, 10, is at left, background. The school was reopening after being flooded in August 2016. 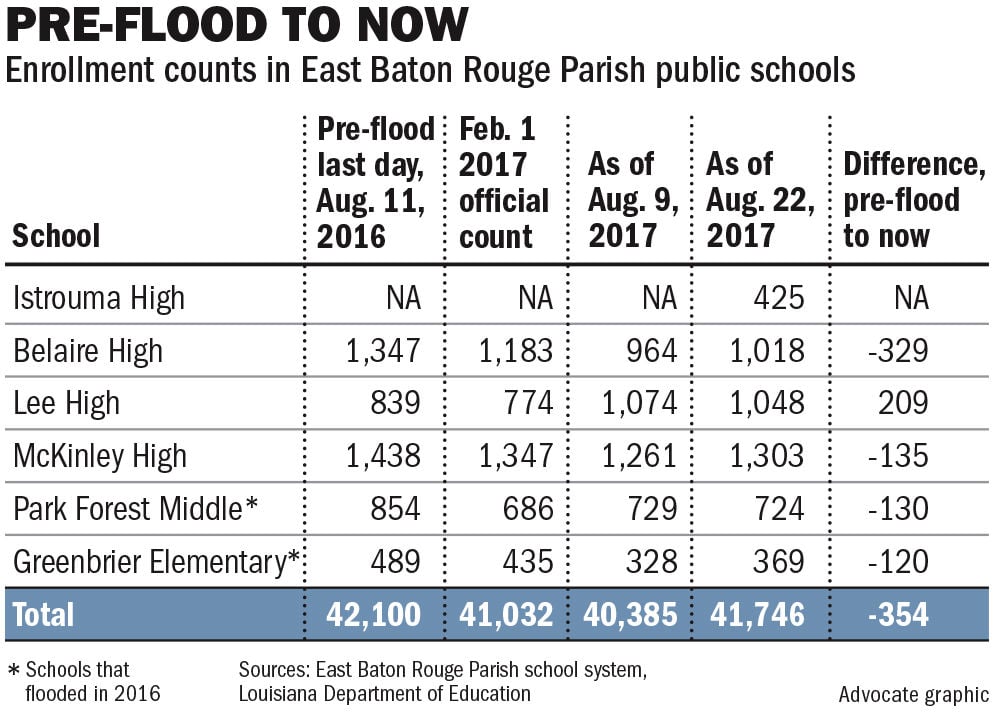 Welcome back sign on the first day of school at Glen Oaks Park Academic Elementary Magnet Elementary School on Aug. 9, 2017. The school was reopening after being flooded in August 2016.

T'Shiya Sorrell, 8, left, and her mom Tiffine LeDuff, right, talk after arriving for the first day of school at Glen Oaks Park Elementary School on Aug. 9, 2017. Darmicia Williams, 10, is at left, background. The school was reopening after being flooded in August 2016.

Baton Rouge public schools have steadily added students since school started Aug. 9, easing early fears of a sizable enrollment decline. Even so, overall enrollment is still slightly below where it stood before the historic flood in August 2016.

The school system plans to start dropping no-show students from the rolls Wednesday, likely prompting immediate declines again. But school officials say they are still adding names to their student information system and hope that will help their totals.

The school system, the second largest in Louisiana, saw enrollment decline over the past two years. State funding to the school system dropped by 2.2 percent in 2016-17 compared with two years earlier. Local sales tax collections, however, grew by 10 percent during that same period. That sales tax growth, though, was connected with post-flood spending and is not expected to continue.

Six of the eight flooded schools in the district remain 50 students or more below their pre-flood enrollment levels: Greenbrier, Howell Park, Park Forest, Twin Oaks, Park Forest Middle and Glen Oaks High. The school closest to normal is Glen Oaks Park Elementary, which is only 18 students below pre-flood levels.

As she has on first days of school in years past, LaQuida Davis stood in her doorway Wednesd…

Superintendent Warren Drake, who has visited perhaps half the schools in the system this past week, said, “We are holding our own even with the choices students have.”

The flood, though, will affect the area for a long time to come, he said.

“Many families are still not in their homes. As those homes come back, so will the students,” Drake said. "Some schools show an increase, and I think that may be because families have moved into those areas. The flood will continue to redefine population centers in Baton Rouge.”

High schools are where the biggest enrollment shifts have occurred, thanks partly to the reopening of Istrouma High School. The historic north Baton Rouge high school, which reopened three years after it was closed by the state, had 425 students enrolled Tuesday. Istrouma started this year with only ninth and 10th grades. It plans to expand into 11th and 12th grades over the next two years.

If you live or work near 3730 Winbourne Ave. in Baton Rouge and you think you’re hearing the…

Most of Istrouma’s students previously went to Belaire High School. Belaire had 1,018 students enrolled Friday. That’s down 329 from a year ago but up 54 students from the first day of school this year.

Among the other Baton Rouge high schools, Baton Rouge Magnet, Lee, Northeast, Scotlandville and Tara have increased in enrollment, while Broadmoor, McKinley and Woodlawn are down.

Lee High grew the most, adding 209 students, bringing its enrollment to 1,048 students. The former neighborhood high school became a dedicated magnet school in 2013 and has been steadily growing ever since. That growth accelerated a year ago when Lee moved back to its historic home at 1105 Lee Drive and into a new $54.7 million facility with the capacity for 1,200 students.

McKinley High, which is not far from Lee, lost 135 students compared with a year ago, but it still has more than 1,300 students.

Of the rest of the schools, Wildwood Elementary is the fastest growing, adding 96 students. This elementary school at 444 Halfway Tree Road saw its enrollment jump from 517 students pre-flood to 613 students on Friday.

Claiborne Elementary had just 524 students enrolled Tuesday, 72 fewer than a year ago. Just four years ago, the elementary school, at 4707 Denham St., had more than 800 students. Since then, several independent charter schools have opened nearby.

Melissa Garrett, who oversees school enrollment numbers for the district, noted that this past summer, a new student information system called JCampus came online. She said it has taken some time to get schools up to speed on the new system. Some charter schools that are part of the school system, known as Type 1 charters, have their own student information systems and have been slower in updating numbers in JCampus, she said.

Indeed, South Baton Rouge Charter Academy shows only 465 students in JCampus and no kindergartners at all. In reality, the school is educating about 130 more students, which is consistent with past enrollment. A spokeswoman for the charter school confirmed that the school’s real enrollment is almost 600 students, 80 of them kindergartners, and that school staff are working to update their enrollment information.

Another factor weighing down this year’s enrollment is that one charter school, Thrive Charter Academy, gave up its Type 1 charter contract to become a statewide boarding school for troubled students. Last year, Thrive had 140 students. Those students are no longer included in East Baton Rouge’s totals.

Guest column: Put an end to the education uncertainty of 13,000 students