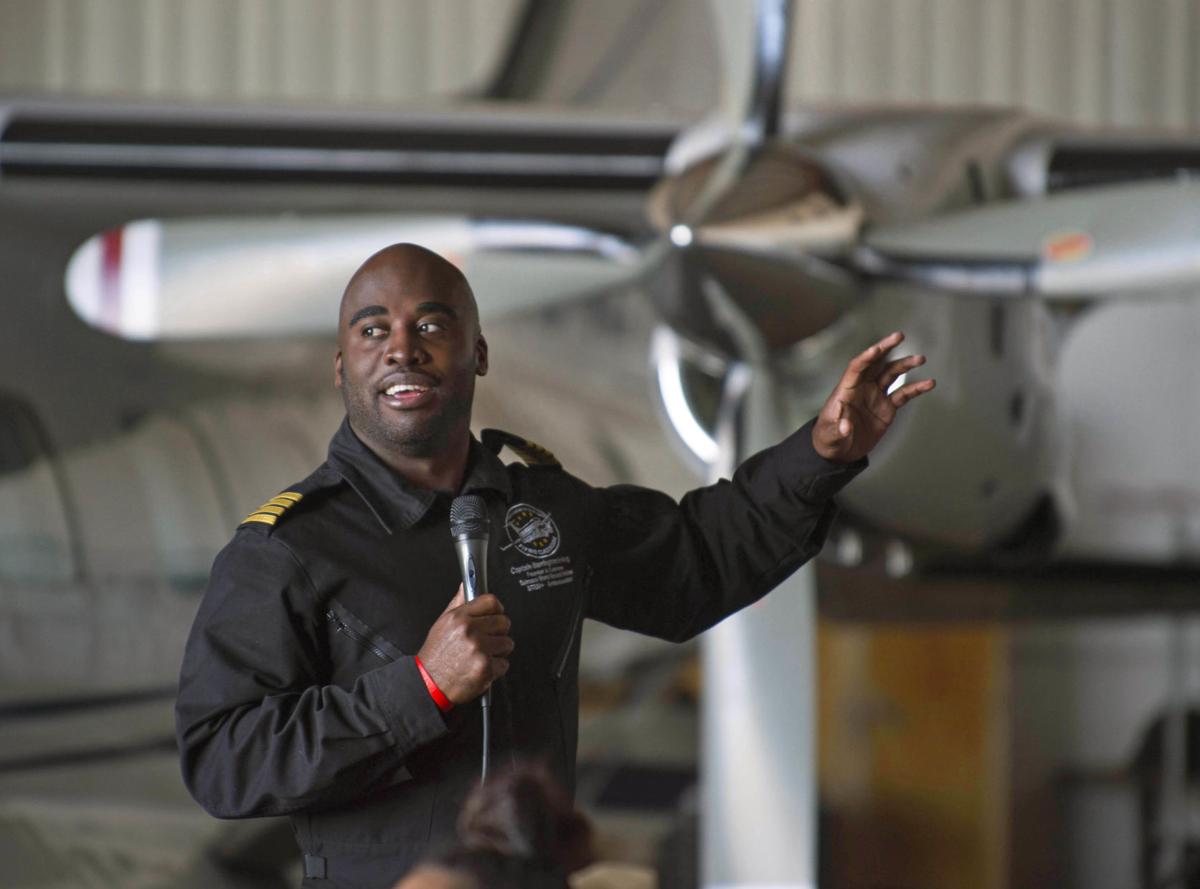 Jamaica native Barrington Irving, who made a solo flight around the world by himself at age 23, becoming the youngest person at the time to ever do that and the first African-American to do so, speaks to Scotlandville Pre-Engineering Magnet Academy students during the Flying Classroom program, Tuesday, March 20, 2018 inside an aircraft hangar at Signature Flight Support BTR. 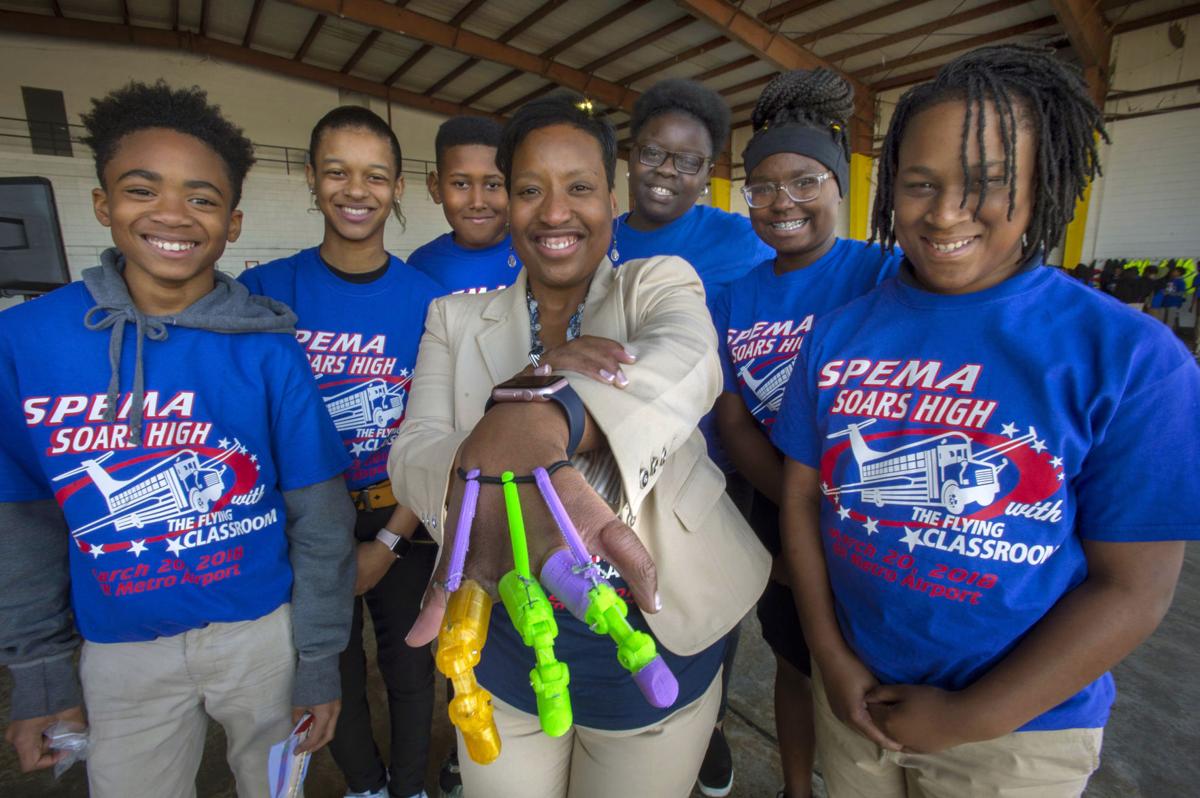 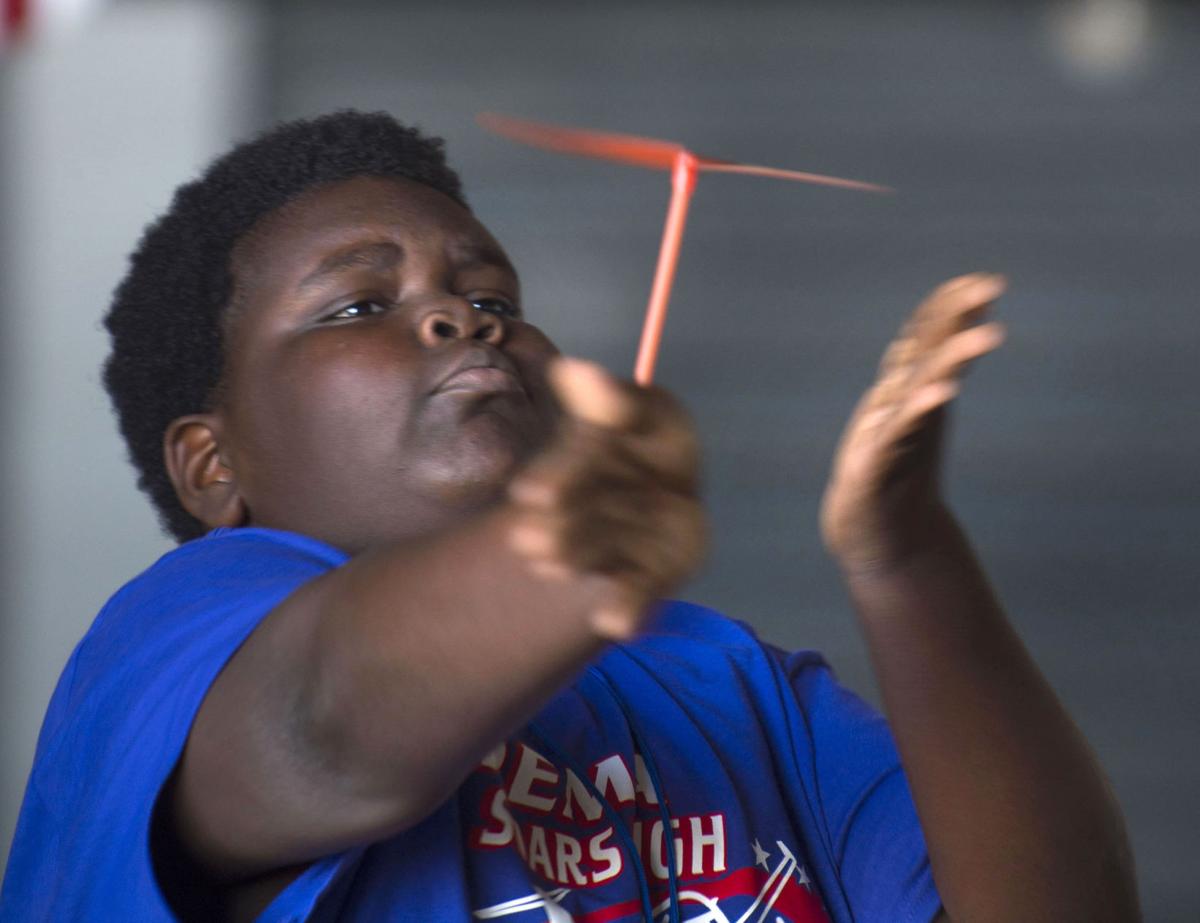 Isaiah Butler, 12, spins a propeller in his hands and watches it take flight, during a Flying Classroom exercise with other Scotlandville Pre-Engineering Magnet Academy students Tuesday, March 20, 2018 at Signature Flight Support BTR. 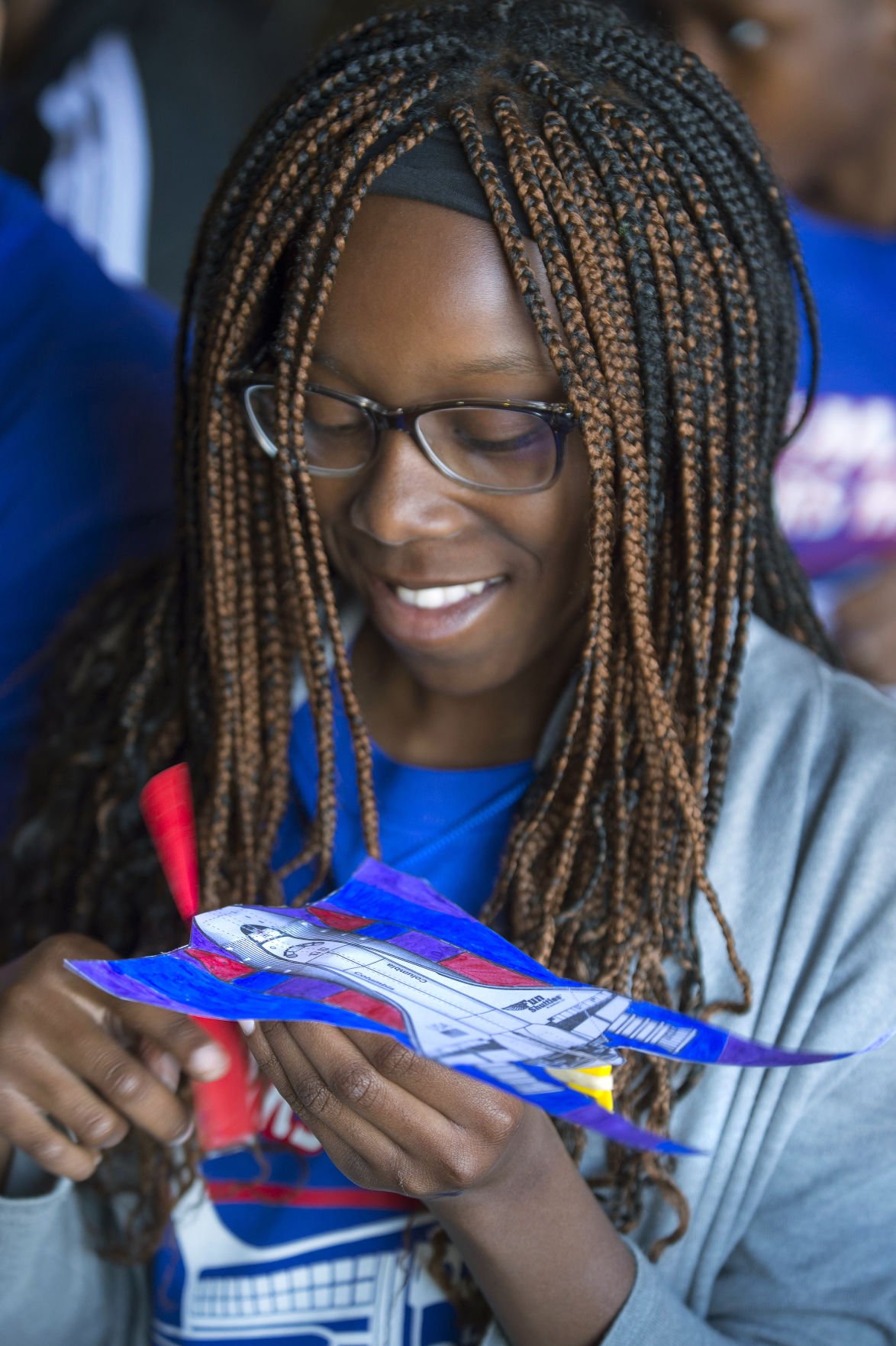 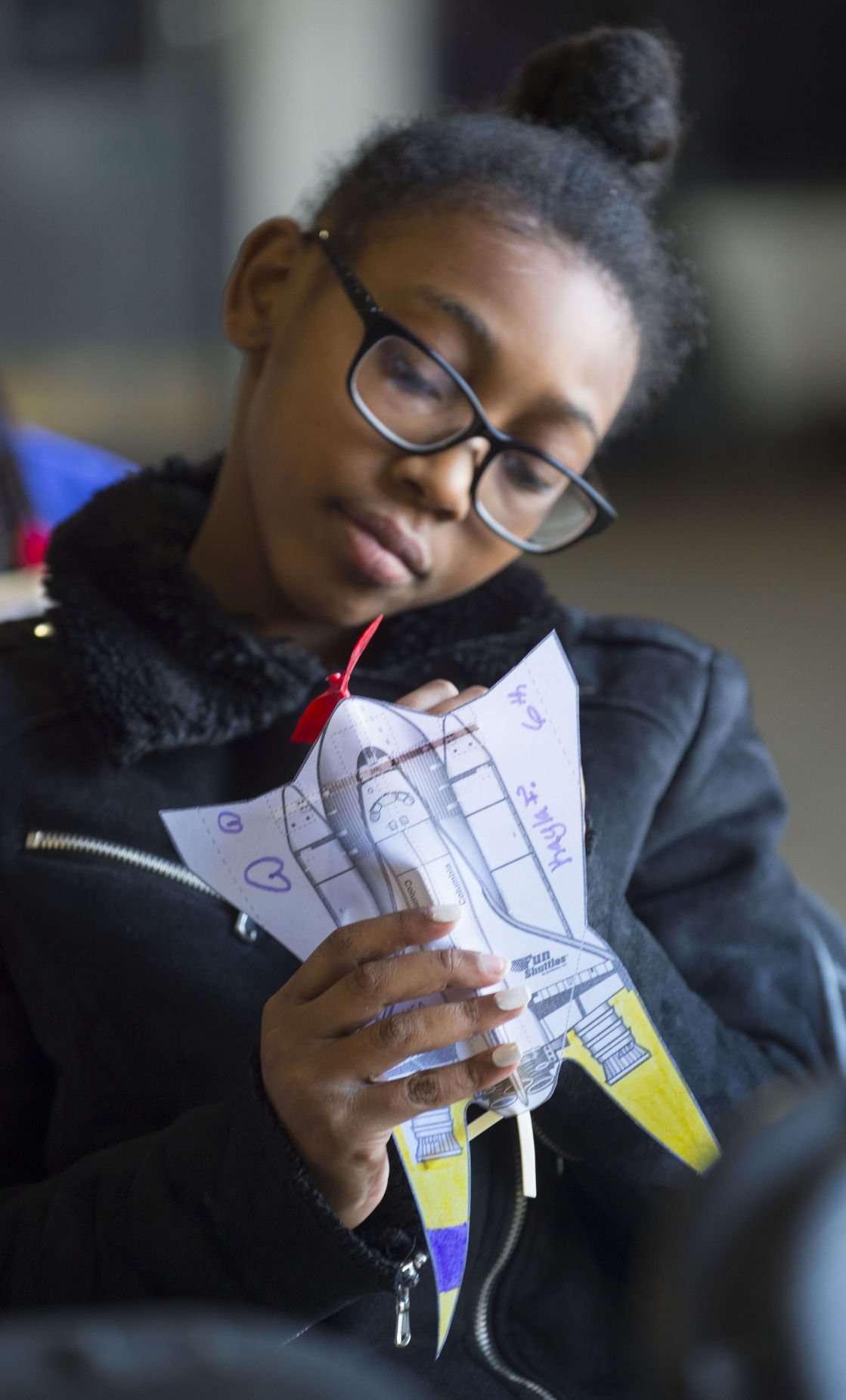 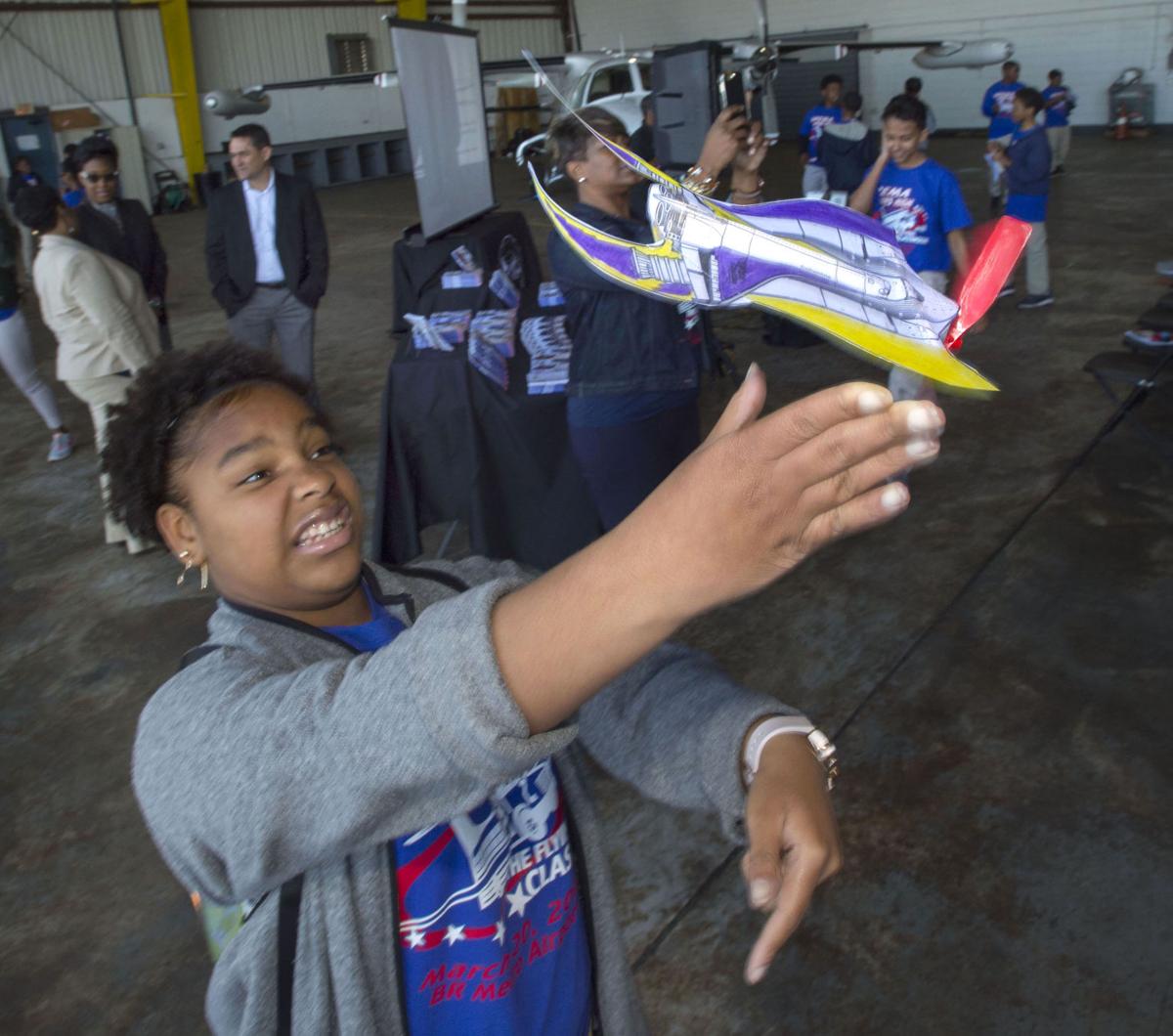 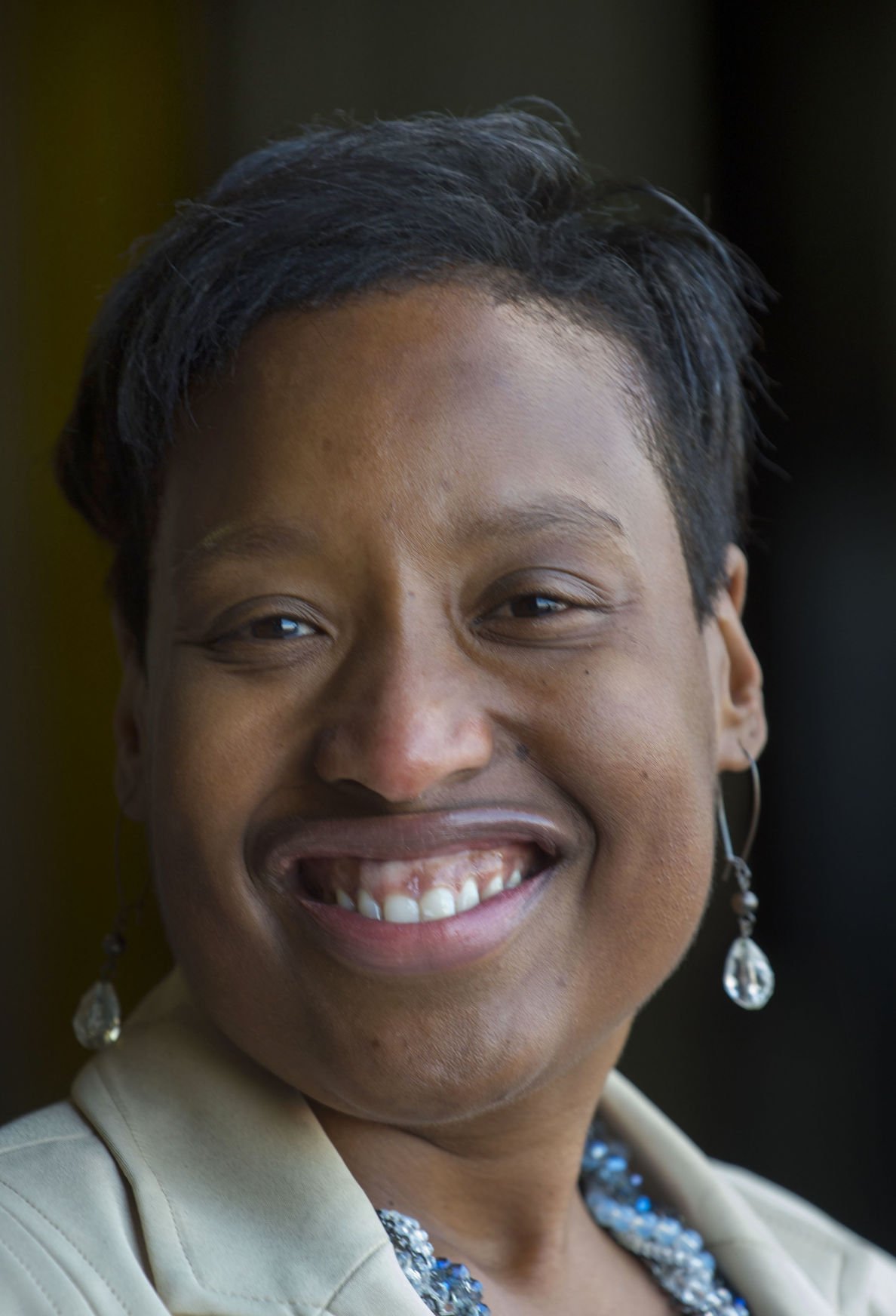 Jamaica native Barrington Irving, who made a solo flight around the world by himself at age 23, becoming the youngest person at the time to ever do that and the first African-American to do so, speaks to Scotlandville Pre-Engineering Magnet Academy students during the Flying Classroom program, Tuesday, March 20, 2018 inside an aircraft hangar at Signature Flight Support BTR.

Isaiah Butler, 12, spins a propeller in his hands and watches it take flight, during a Flying Classroom exercise with other Scotlandville Pre-Engineering Magnet Academy students Tuesday, March 20, 2018 at Signature Flight Support BTR.

At the age of 23, Barrington Irving entered the record books as not only the youngest person to fly a plane around the world by himself, but the first African-American to do so.

Now 34, this native of Jamaica flies around the country telling youngsters about his 97-day, 30,000-mile journey. He wants children to find in his unlikely story the inspiration, and the confidence, to fulfill their own dreams.

On Tuesday, his MU–2 twin turboprop took him to Baton Rouge Metro Airport, where he talked to about 150 middle schoolers. Afterward, he drove over to their school, Scotlandville Pre-Engineering Magnet Academy, to talk again.

The school recently started teaching “expedition lessons” from the digital curriculum Irving developed called Flying Classroom. The curriculum is now in almost 600 elementary and middle schools across the country. The 30 lessons deal with subjects ranging from high-altitude balloons to deadly snakes, all falling under the big umbrella known as STEM, short for science, technology, engineering and math.

Irving said the Flying Classroom reflects what he would have liked to have seen when he was in school.

“These kids don’t have content they can relate to,” said Irving. “That’s what I struggled with when I was in school.”

The lessons are meant to serve as inspirational stories.

“Now it’s not just my story, but the stories of others in STEM,” he said.

Bria Jarrell, who is coordinator of the Scotlandville academy's Project Lead The Way pre-engineering program, said the Flying Classroom has been an immediate hit with her students.

“They were all rushing, they were excited, they were happy,” she said.

The lessons ask a lot more of students than they are used to.

“It really pressured the students to do higher-level thinking,” Jarrell said.

The first lesson the Scotlandville academy students tried back in January, about a professional chef in Bozeman, Montana, who is able to work thanks to a prosthetic hand, prompted an unusual class project: They designed a prosthetic hand for their principal, Shalika Scott.

Scott has a birth defect that left her with just two functioning fingers on her left hand. The students have given her three 3D-printed replacements fingers, allowing her to close her hand and pick up objects.

“It is so amazing,” said an emotional Scott as she was given a prototype of her new hand Tuesday. “I’m so honored that the students would think of me so much to do something like this.”

Scott said never considered getting a prosthetic hand herself as even a possibility, simply considering her missing fingers as “the cards I was dealt in life.”

Irving’s visit to Baton Rouge on Tuesday was arranged by educational publishing giant Scholastic. Irving serves as a STEM Ambassador for Scholastic, which published his 2012 memoir “Touch The Sky,” co-written with writer Holly Peppe. Irving came to Baton Rouge with autographed copies of his book and he gave them to all of the students in the program.

Irving said he visits every school that uses the Flying Classroom.

“Every school that works with us they know exactly who I am and they get to see me and understand I’m not just a character on the screen,” he said.

RaShauna Stewart, 14 and an eighth-grader, said it was treat to see Irving in person.

“It was cool because I finally got to meet someone who was an inspiration,” she said.

Jameon Parker, 13 and a seventh-grader, said he was surprised to learn how young Irving was when he made his big flight. Parker said he’s not sure whether he'd like to fly himself, but there’s something else he wants now.

“I want one of those,” Parker said, pointing at Irving’s plane.

Dressed in a black flight suit, Irving spoke to the students in a hangar at the airport, his plane behind him. He told them how he was born in Jamaica, moved to Miami at 6 and about the rough children he experienced there.

In high school, he saw football as his ticket out — until the day he met Capt. Gary Robinson, a fellow Jamaican who was flying airliners for United Airlines. Soon Irving wanted to be a pilot as well but he struggled to find the self-confidence to follow through on that goal.

“I thought I was too poor,” he said. “I didn’t grow up in a neighborhood where people do this kinda thing.”

But Robinson assured him he could do it, even when Irving said he wanted to attempt an around-the-world flight.

“If he had said to me, ‘Son, I don’t think you can fly around the world,’ I would have never done it,” Irving said. “He believed in me and that’s all I needed to go on my way.”

The experience cemented for Irving the importance of having mentors, something he says to all his young audiences.

Even as he tried to get his listeners to aim higher, Irving also tried to burst a few balloons. He said flying the plane behind him cost $2,000 an hour just in fuel, meaning that when he’s not using it for work purposes, “I’m flying Jet Blue.”

When a student asked him how he was able to do so many dangerous things, Irving responded, “Preparation,” saying it’s the key to success in everything. He said he has to return to flight school periodically, which costs him $12,000 each time, to maintain his pilot level.

“You all have to take quizzes and exams,” he said. “I have to do the same thing.”

Baton Rouge middle schoolers go 'above and beyond' to upgrade car for parent in need: 'I feel grateful'

For the past six years, Stephanie Matlock has taken the bus or had friends and family give her rides. On Friday, that changed.