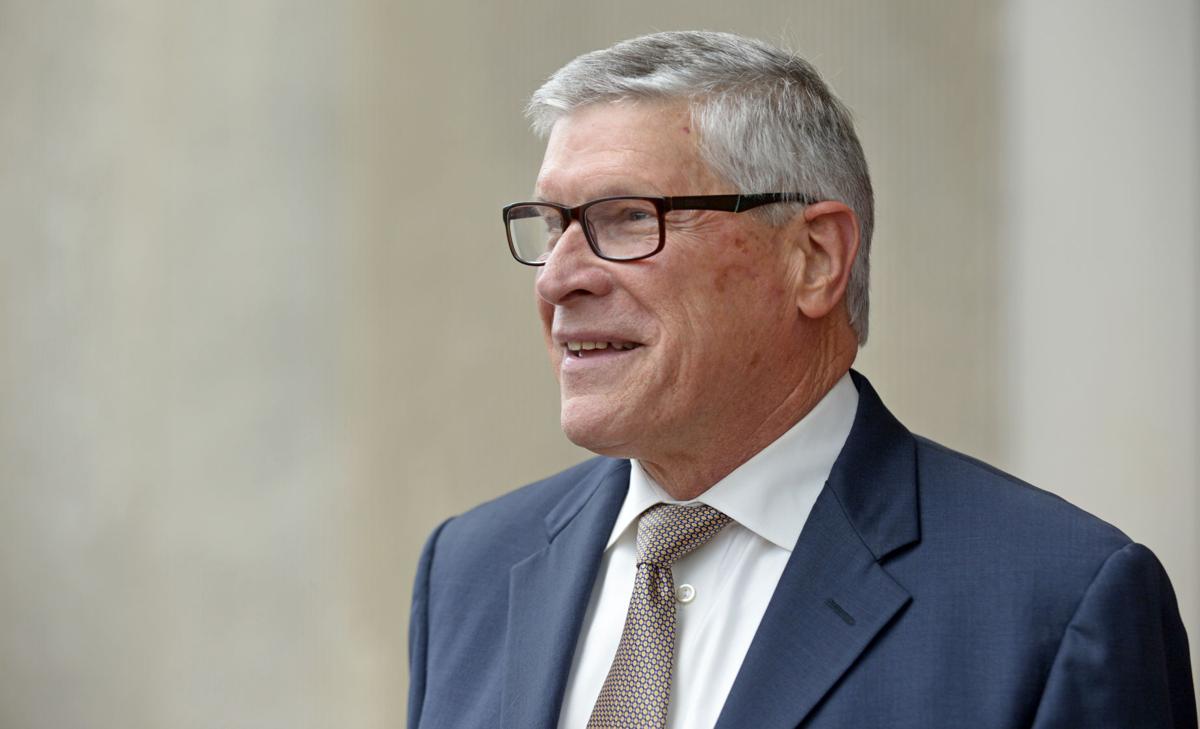 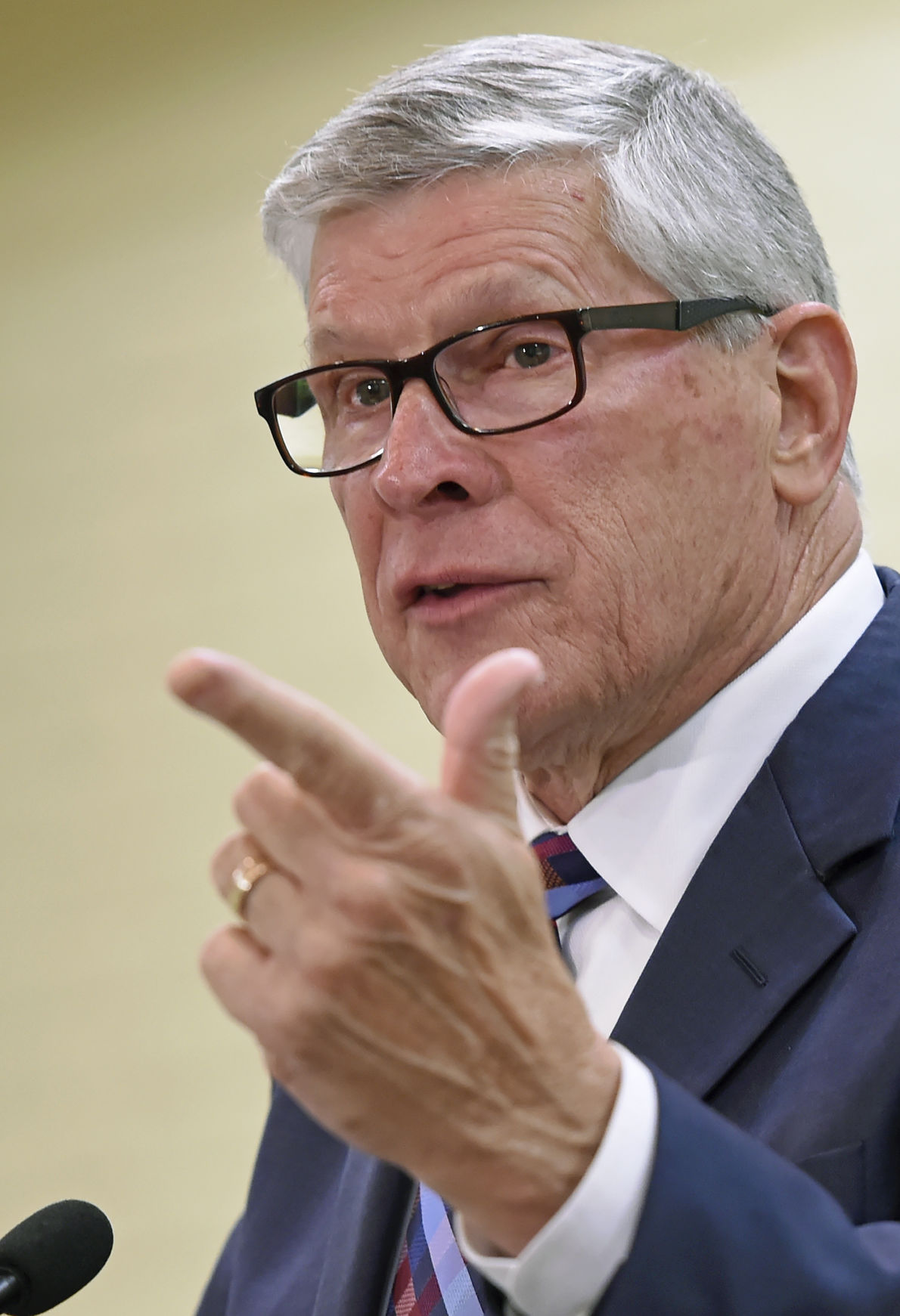 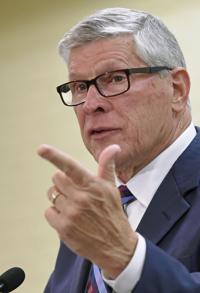 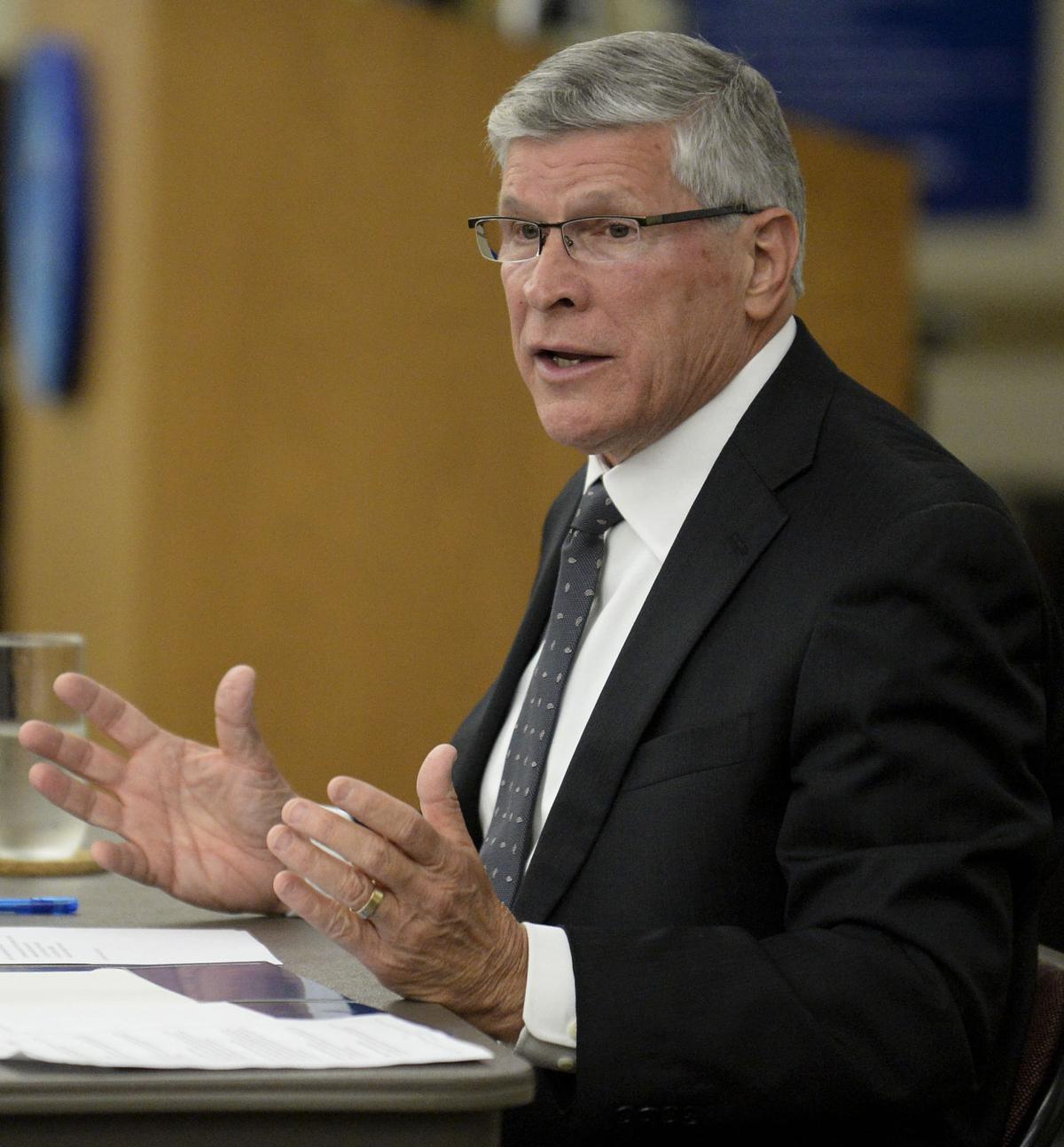 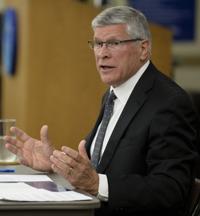 Warren Drake speaks before the parish School Board, before becoming East Baton Rouge Parish school superintendent, Mar. 26, 2015. Drake was named the finalist by the school board after just 45 minutes of examining the 10 applicants for the job. 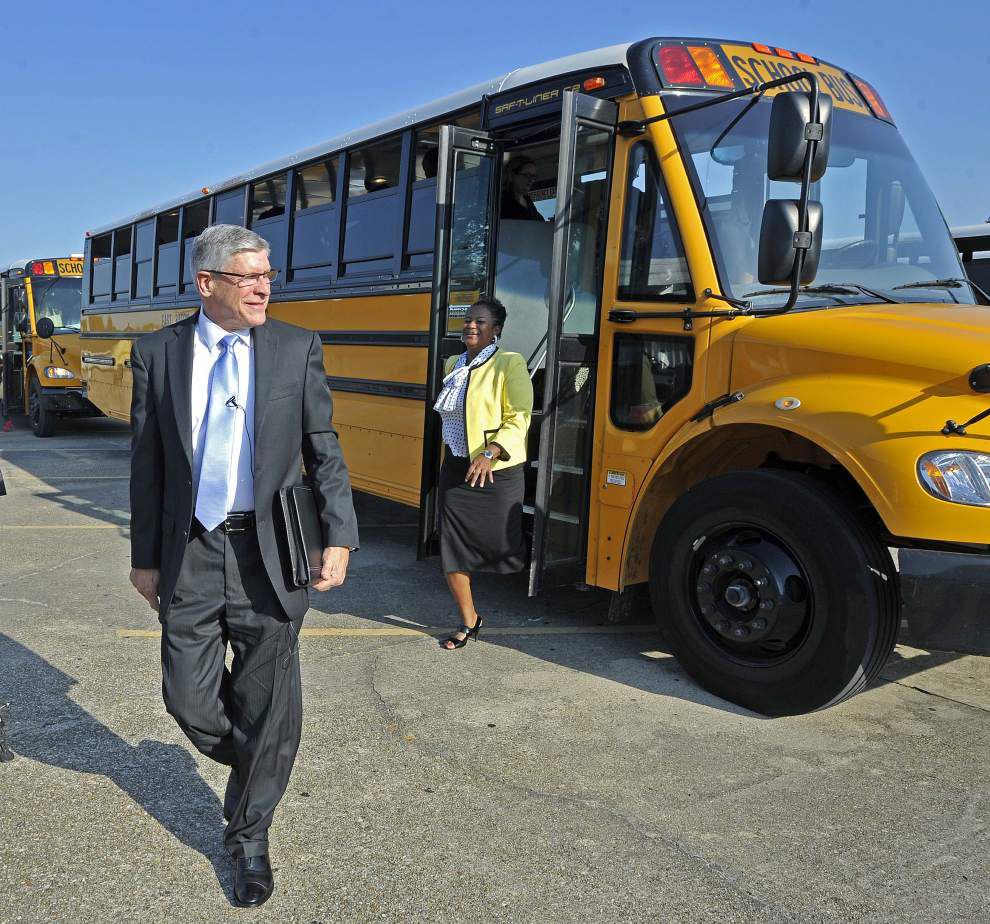 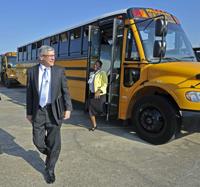 East Baton Rouge Schools Superintendent Warren Drake, left, exits a school bus at Bethany World Prayer Center in Baker, for a convocation with EBR teachers during which he spoke of his vision for the school system for the 2015-16 school year and beyond. Drake took over school system June 1, after teachers left for summer vacation. All teachers, and Drake, took buses to the Aug. 7, 2015, convocation.

Warren Drake speaks before the parish School Board, before becoming East Baton Rouge Parish school superintendent, Mar. 26, 2015. Drake was named the finalist by the school board after just 45 minutes of examining the 10 applicants for the job.

East Baton Rouge Schools Superintendent Warren Drake, left, exits a school bus at Bethany World Prayer Center in Baker, for a convocation with EBR teachers during which he spoke of his vision for the school system for the 2015-16 school year and beyond. Drake took over school system June 1, after teachers left for summer vacation. All teachers, and Drake, took buses to the Aug. 7, 2015, convocation.

Warren Drake plans to retire as superintendent of the East Baton Rouge Parish school system at the end of his contract in June 2020, when he'll reach the five-year mark in the position.

“I’m going to be finishing my contract and then I will be leaving after that,” Drake told The Advocate.

Drake’s impending departure means the new School Board, whose members will be sworn in to their four-year terms on Jan. 8, will soon begin addressing how to search for Drake’s replacement.

Drake, who has been quietly telling School Board members of his plans for months, said he’s feeling his age and has things he like to do in his retirement.

Dadrius Lanus has joined his friend Tramelle Howard as the newest and youngest members of the East Baton Rouge Parish School Board, a board fi…

Drake was quick to make clear that the recent elections, in which Tramelle Howard and Dadrius Lanus defeated incumbents Kenyetta Nelson-Smith and Vereta Lee, played no role in his decision.

“I don’t want our new board members to think I’m leaving because they’re coming on,” he said.

Drake is a familiar face in the Baton Rouge education community. He spent most of his career in the district, including six years as principal of Tara High. He later spent a decade leading the new Zachary school district, which quickly shot to the top of the state rankings. After that he spent three years as an administrator in the state Department of Education under state Superintendent John White.

In spring 2015, he applied on the first day applications were opened and was the only candidate interviewed.

Despite the apparent ease of his rehiring, Drake's tenure has often been tumultuous.

His most high-profile success has been persuading the state to return control of Istrouma High School. It reopened in 2017, with the help of more than $29 million in renovations, and now has more than 800 students.

In April 2018, Drake successfully shepherded the renewal of a 1-cent sales tax, which will raise an estimated $937 million between 2019 and 2029. Among other things, the tax will fund 22 major construction projects, including rebuilding six schools and constructing up to three new schools somewhere in south Baton Rouge.

Drake's first year saw growth in almost all academic indicators, followed by declines during year two, and some rebounds at many schools in year three. Thanks in part to stricter academic standards, the number of schools requiring extra intervention has grown during his tenure.

The August 2016 floods were no help. Students missed 16 days of school, and 10 Baton Rouge public schools flooded along with several administrative centers. A multi-million rebuilding effort is mostly complete, though some repairs continue at the only flooded high school, Glen Oaks High. After lobbying from Drake, the state granted a waiver on school reports for the 2016-17 school year because of the flood disruption.

The East Baton Rouge Parish School Board on Thursday unanimously rehired Warren Drake to serve as its superintendent for two more years, but n…

Throughout his tenure, Drake has generally maintained good relations with the board, earning strong annual evaluations. The board in September 2017 unanimously extended his three-year contract for two more years.

"We have the best superintendent in the state of Louisiana," board member David Tatman said at the time.

Board member Connie Bernard has yet to accept Drake’s saying he’s leaving as the final word but she doubts he will change his mind.

“Any time the opportunity presents itself I encourage him to stay,” she said. “Warren has brought so much confidence and stability to the role that he makes our job easier.”

Tatman, the current board president, said Drake has likewise told him he’s not planning to return, but Tatman said Drake would be the one to talk about that to the public.

Tatman said the board won’t have to rush into a search next year and could wait until as late as December to start looking for Drake’s replacement.

That’s a later start than many past searches.

For instance, soon after Tatman joined the board in 2011, the school system began soliciting proposals for a national search firm that July, opened applications in October and conducted two rounds of interviews in January and March before finally hiring Bernard Taylor, then the outgoing superintendent of schools in Grand Rapids, Michigan. It was a long, acrimonious search that left a bad taste in many mouths, including Tatman’s.

“I found that when we used the national search firm, that a lot of the people we interviewed were in the (firm’s) stable and that we probably didn’t get the broader appeal that we thought we would get,” Tatman said.

A search now would be easier, he said, because he and other veteran board members have a broader network of people to call on to find good, potential candidates.

“As we move into next year and as we get into the summer we’ll have to look to see if there are people we could identify through our own contacts,” Tatman said.

Bernard said she’d like someone with local educational expertise, though not necessarily someone currently with the school system.

“I do favor people who understand the community here,” she said.

Board member Evelyn Ware-Jackson, who has been increasingly critical of Drake in recent months, said she’s not looking forward to a new superintendent search.

“I hope we can find someone with a record of turning around schools with similar demographics,” Ware-Jackson said. “Louisiana-grown would be great.”

Drake said he does not have an heir in mind, but says if the board wants to hire from within there are options. “There are a number of people in this organization who could do a great job.”