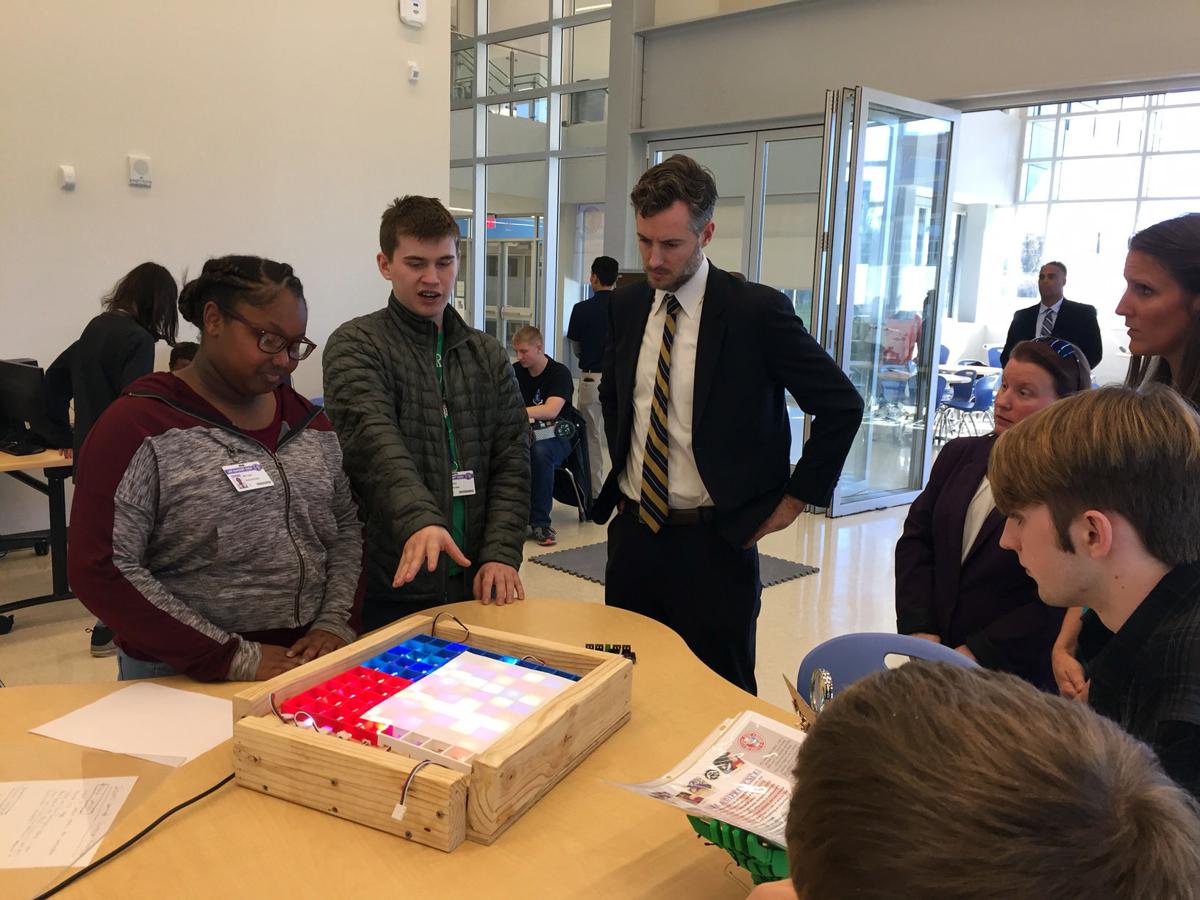 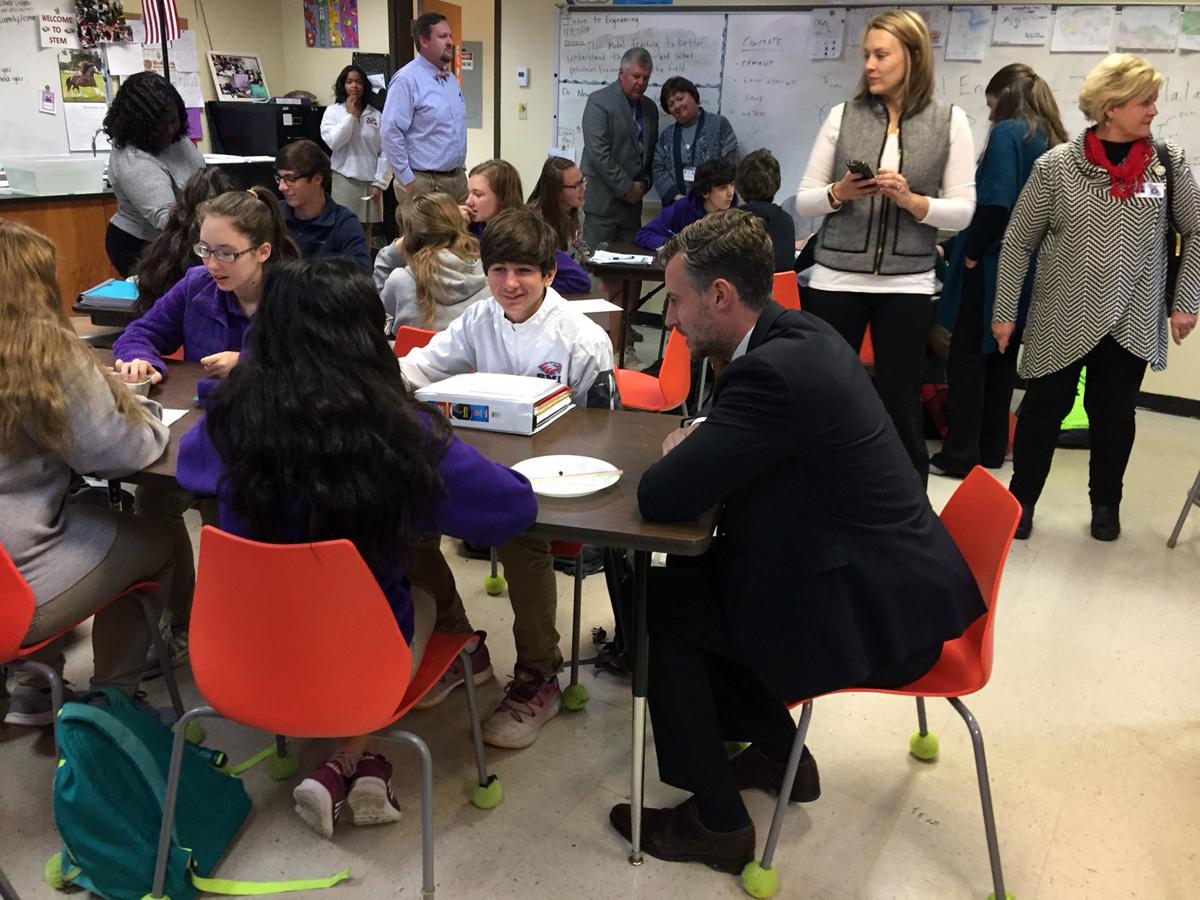 State Superintendent of Education John White joins a table of students during a visit to STEM Magnet Academy in New Roads. The school, which is in its second year, includes a pre-engineering pathway offered by LSU. 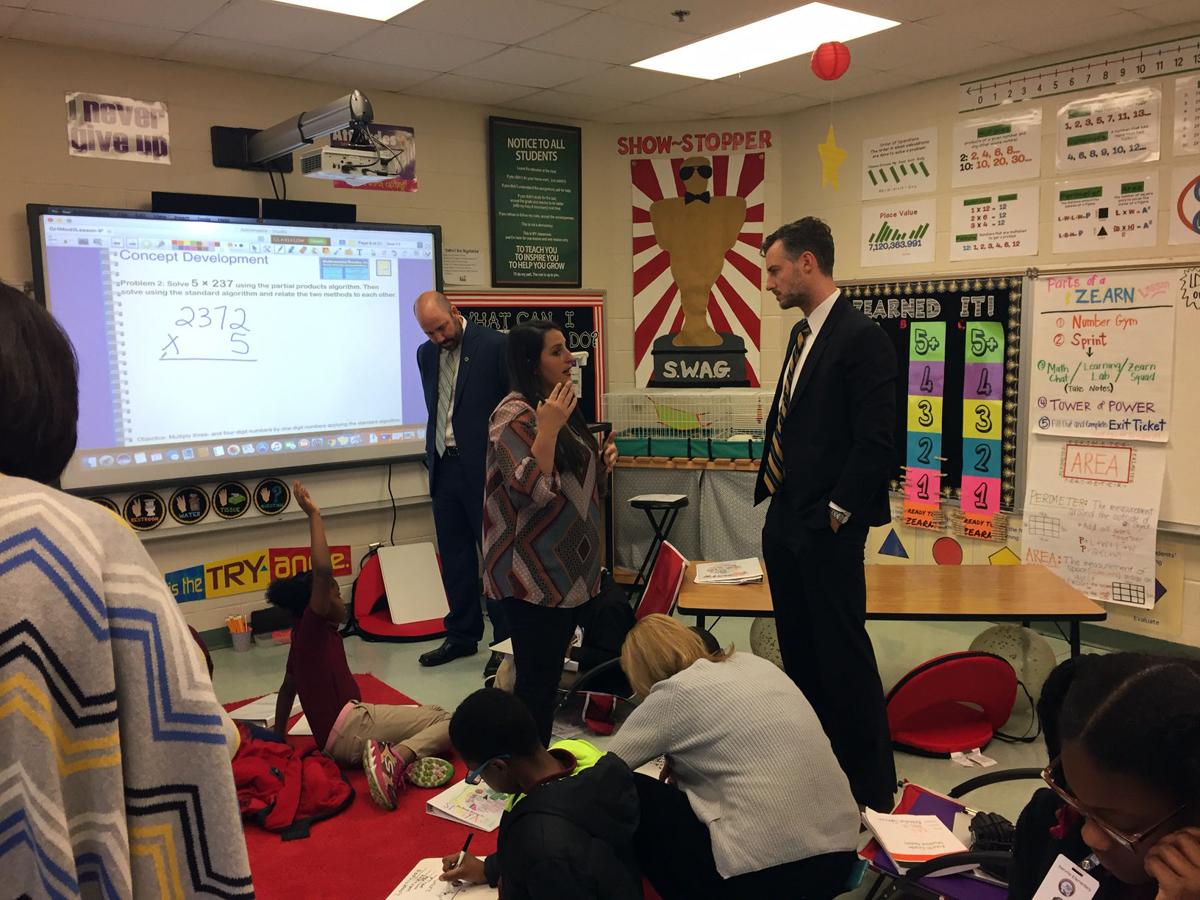 State Superintendent of Education John White chats with fourth-grade math teacher Lindsey Holtrop during his visit to Iberville Elementary School in Plaquemine. The school launched a new curriculum this year, including more autonomy for students to choose learning activities.

State Superintendent of Education John White joins a table of students during a visit to STEM Magnet Academy in New Roads. The school, which is in its second year, includes a pre-engineering pathway offered by LSU.

State Superintendent of Education John White chats with fourth-grade math teacher Lindsey Holtrop during his visit to Iberville Elementary School in Plaquemine. The school launched a new curriculum this year, including more autonomy for students to choose learning activities.

In nearly six years on the job, state Superintendent of Education John White has battled two governors, teacher unions and an assortment of angry state lawmakers.

At various times the New York City transplant was said to be preparing to quit amid the turmoil, heading off to a cushier education job in California or elsewhere.

Not only has White survived the dust-ups, he is now the fifth longest-serving state superintendent in the nation — two years after Gov. John Bel Edwards' 2015 campaign vow to replace him.

In addition, he has chalked up more wins than losses since 2012, and has helped usher in some of the most sweeping changes in Louisiana public schools in generations.

White's first year as superintendent included the passage of still-controversial laws for a statewide expansion of vouchers, which allow certain low-income students to attend private schools at state expense, and tougher rules for teacher tenure.

White won narrow support from the Board of Elementary and Secondary Education, after months of debate, for plans to overhaul teacher training, tougher rules for how public schools are graded and other changes sparked by the federal Every Student Succeeds Act.

Barry Erwin, president of the Council for a Better Louisiana and a longtime ally of the superintendent, said those and other policies have the potential to be transformative. "We are making a lot of progress on the policy front, though we have a long way to go on student performance," Erwin said.

All three groups generally disagree with White on the merits of vouchers, teacher evaluations, public school letter grades and a host of other issues.

One of the current sore spots is that White, who is paid $275,000 per year, operates on a month-to-month contract.

White's supporters are at least one vote shy of extending his contract. Opponents are even further from rounding up the votes needed to fire him, and Edwards has only three appointees on the 11-member board.

Scott Richard, executive director of the Louisiana School Boards Association, said the impasse amounts to handing White a perpetual job. "Probably not the best policy for a position that impacts so many in our state," Richard said in an email response to questions.

Edwards' office did not respond to a request for comment.

White, 42, was endorsed for the job by BESE on Jan. 11, 2012. He was pushed for the job for months by Jindal, who spent months campaigning for BESE candidates to line up support.

White said he plans to stick around.

"I could not think of a higher calling than to be working in Louisiana for the children of this state," he said.

The state ranks 10th among the 17 states where all students take the ACT, which measures college readiness.

The number of students earning AP credit is up 137 percent since 2012, according to the state Department of Education.

However, all three numbers remain low by national standards.

White said the state has moved from 49th to 43rd in fourth-grade reading, and that fourth-graders who are black rank 20th in the U.S. in reading.

He said there are clear gains in the department's five focus areas, including a unified child care system, preparing teachers and a quality curriculum.

"In almost every conventional sense, across thousands of students, there is progress," White said.

Education Week magazine last year ranked the state 49th. Other reports have offered similar conclusions for a state where two thirds of the roughly 720,000 students qualify for free and reduced-price lunches.

One common refrain among critics is that White fails to work collaboratively with the state's 69 local school superintendents.

Warren Drake, superintendent of the East Baton Rouge Parish School District and a former lieutenant of the superintendent, said White is a smart man with a vision.

But Drake said local superintendents used to look to the state superintendent to be their leader. "And I am not sure that there is as much of that feeling as there used to be," he said.

Mike Faulk, superintendent of the Central School District and former president of the Louisiana Association of School Superintendents, made a similar point.

"I would have hoped he would have listened to school superintendents more," Faulk said. "I just don't know if he has ever gotten the true pulse of Louisiana education."

White figures he has visited all 69 school districts, and he often spends parts of the fall in his nondescript, state-owned Prius driving around the state.

During a three-school swing on Nov. 27, the superintendent got on the floor to chat with students at Iberville Elementary School in Plaquemine.

He tried his hand at a virtual computer lab at STEM Magnet Academy in New Roads, and he listened to students explain their engineering experiments at Lee Magnet High School in Baton Rouge.

Jada Lewis, a BESE member from Baton Rouge who joined part of the tour, sometimes disagrees with White on policy debates. But she said there has been progress in her dealings with the superintendent in the past 18 months, and that he is flexible and open to feedback.

"So I think it is better than it was," she said.

Asked about the impasse on White's contract, she said, "We don't really talk about it. It is an issue. But we don't know how to resolve it. What do you do?"

Aside from vast differences with White over education policy, LAE President Debbie Meaux said he should face new confirmation hearings in the state Senate since a new BESE board took office in 2016.

"I feel that BESE  is going around that provision," Meaux said.

A lawsuit that made the same argument was tossed out by 19th Judicial District Court Judge William Morvant, of Baton Rouge, on July 10.

White's critics have not dropped the issue, Edwards said earlier this year he might pursue it, and the topic could appear during the 2018 regular legislative session.

Gov. John Bel Edwards' longtime differences with John White may be headed for the courtroom, again pitting a governor against the state superi…

White, who got married in June, grew up in Washington, D.C., lives in New Orleans and commutes to Baton Rouge.

He is a former deputy chancellor for the New York City Department of Education and is known in national education circles.

"Louisiana has a long way to go, but years of consistent leadership, bold reforms and impressive implementation in the classroom appears to be paying off," Michael Petrilli, president of the Fordham Insitute in Washington, D.C., said in an email.

"Most states now look at Louisiana with envy and grudging respect," Petrilli added.

White has submitted 13 financial disclosure forms that spell out complimentary out-of-state trips he has taken this year.

In October he was in Bogota, Colombia, for the Teach for All Global Conference, where his office said he spoke to international school system leaders on lessons learned from the overhaul of public schools in Louisiana.