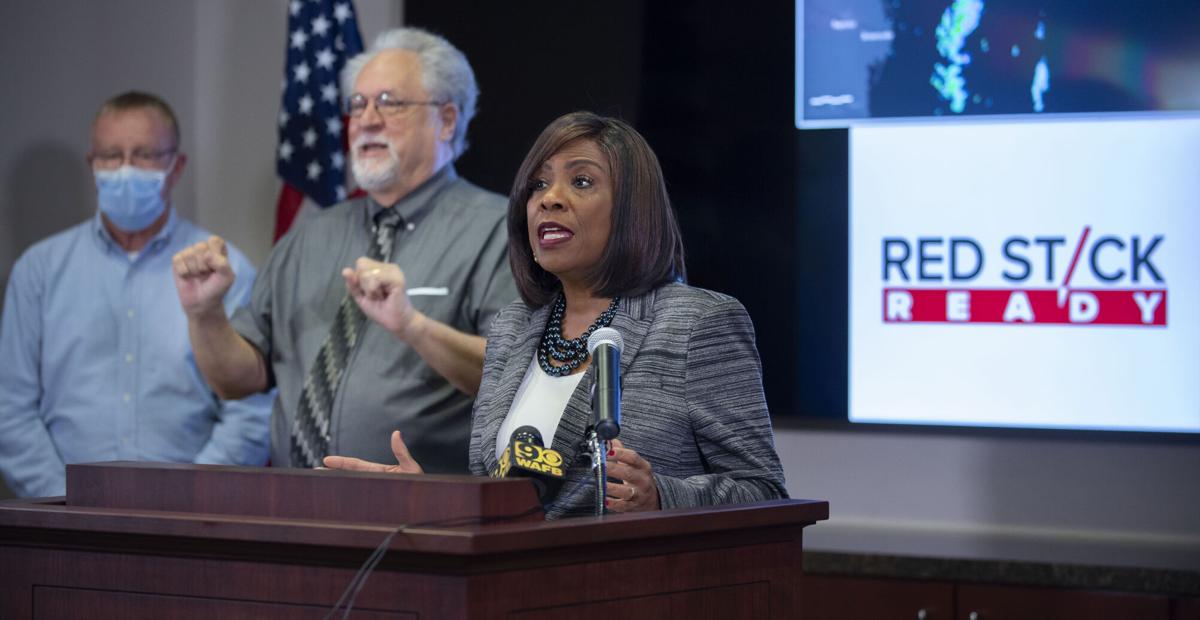 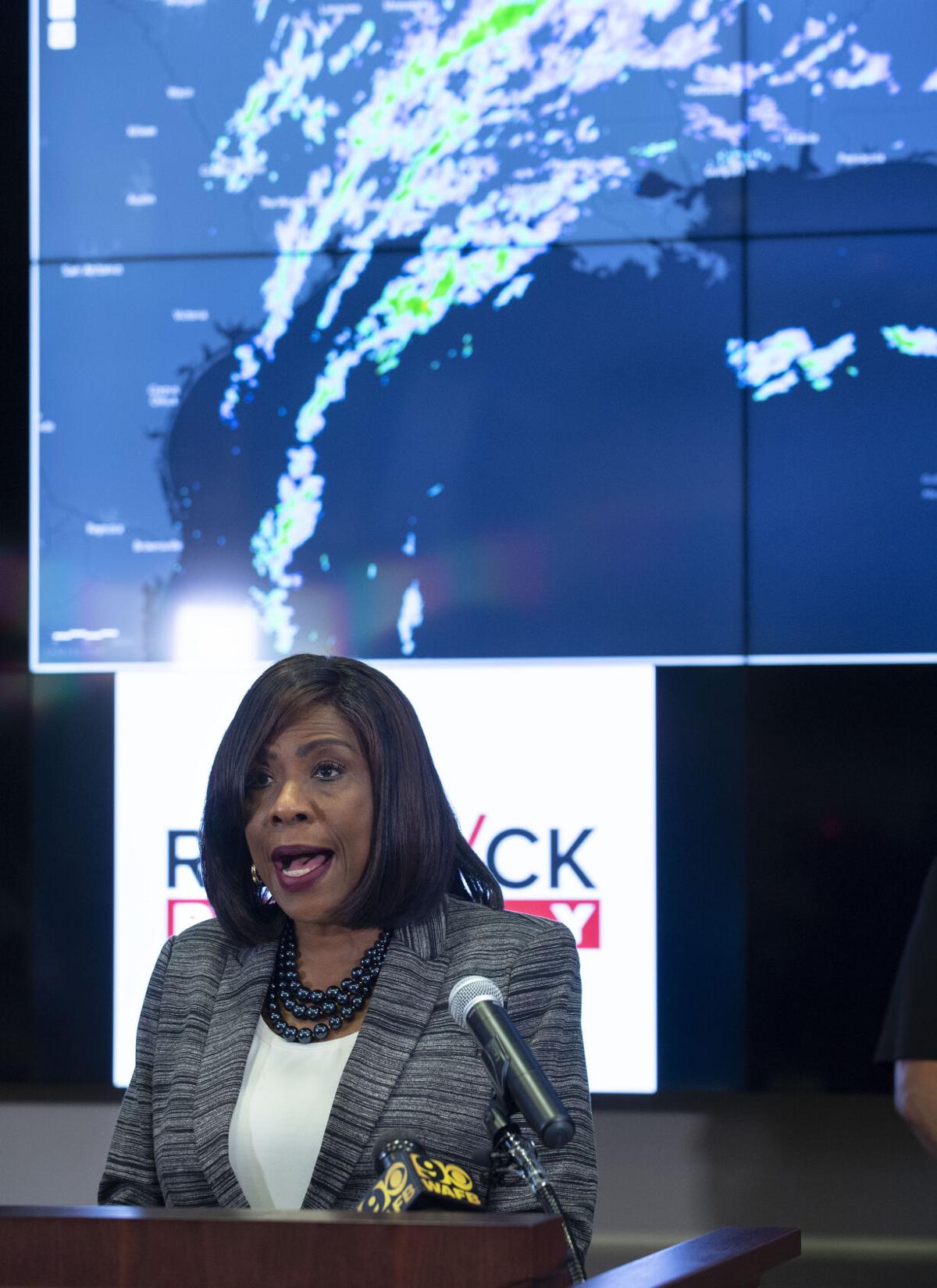 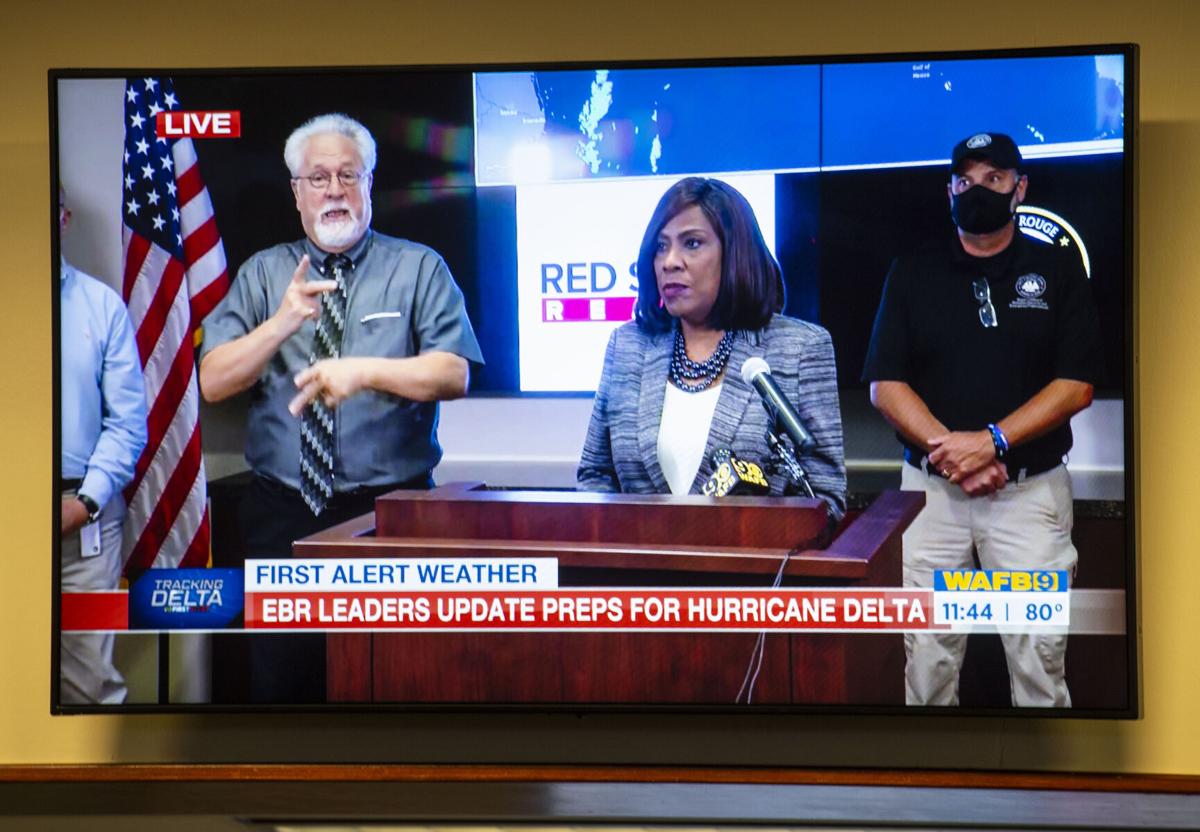 Mayor-President Sharon Weston Broome is seen on a monitor as she speaks at an update concerning preparedness in East Baton Rouge Parish for the approaching Hurricane Delta,Thursday, Oct. 8, 2020 at the Mayor's Office of Homeland Security and Emergency Preparedness. 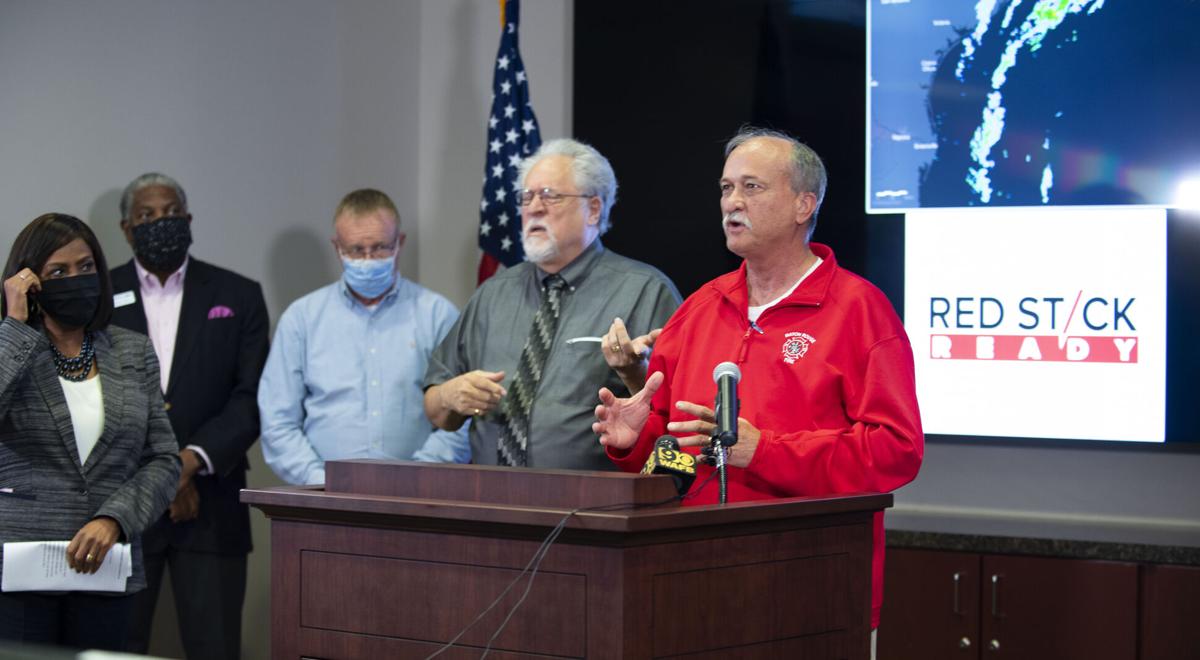 Mayor-President Sharon Weston Broome is seen on a monitor as she speaks at an update concerning preparedness in East Baton Rouge Parish for the approaching Hurricane Delta,Thursday, Oct. 8, 2020 at the Mayor's Office of Homeland Security and Emergency Preparedness.

With hours before Hurricane Delta tears through the state, Baton Rouge-area parishes made last-minute preparations Thursday to brace for destructive winds and potential flooding, as officials warned people not to become complacent following several recent storms sparing the region.

Delta, the 25th named storm in the Atlantic, is likely to make landfall as a Category 2 storm in the southwest part of the state. It marks the sixth time Louisiana has been under a hurricane or tropical storm threat during one of the most prolific hurricane seasons in recent memory.

Though the Baton Rouge area has largely avoided serious weather after past storms this year deviated from early predicted paths, officials urged residents not to let their guard down, stressing that the forecast could change at any minute.

"Hurricane Delta is a dangerous situation," Mayor-President Sharon Weston Broome said Thursday. "2020 continues to keep us on our toes, but I want to remind each of you, now is not the time to be complacent."

When Delta smashes ashore Friday, it's expected to thunder inland between Lake Charles and Lafayette before veering northeast, according to the National Hurricane Center.

The storm reached major hurricane strength Thursday after it entered the Gulf of Mexico, and is expected to weaken as it approaches the Louisiana coast, the Hurricane Center noted in its 4 p.m. update.

Rainfall from Hurricane Delta is forecast to begin in East Baton Rouge Parish as early as Thursday afternoon, and with wind gusts of up to 50 …

Pointe Coupee Parish could see tropical- to hurricane-force winds. If those forecasts hold, it would be the first time the region has experienced winds over 75 mph since 2008 during Hurricane Gustav.

Due to the uncertainty of Delta's path, some parts of Pointe Coupee could see winds up to 110 mph, capable of causing widespread power outages and damaging roofs and buildings, the weather service said.

“It’s good news for us, cause it’s mostly uninhabited,” Ward said, while still urging residents to be vigilant and be wary of other hazards after the storm passes.

As Hurricane Delta marches toward Louisiana's coast, forecasters and local officials warned Wednesday that the Baton Rouge area could be struc…

East Baton Rouge Parish is expected to avoid the worst of Delta, but the storm could still dump anywhere from 4 to 8 inches of rain with higher amounts in certain areas.

Forecasters say the storm will likely move fast over land, which reduces the chance of it stalling and dumping significant amounts of rain in one area.

Weather officials anticipate the most severe weather will happen Friday afternoon, and conditions will likely deteriorate overnight Thursday into the next morning.

Parishes east of the capital are also expected to see less rain and less severe winds, but areas around lakes Maurepas and Pontchartrain could see up to 5 feet of storm surge, according to the weather service.

Tornados are also likely to form throughout the day. While still dangerous, tornados caused by hurricanes tend to be short-lived and weaker than those that form during thunderstorms.

Yes, your phone buzzed with plenty of tornado warnings before Laura. Why? 'Better safe than sorry'

In September 2005, the potent storm bands swirling around Hurricane Rita spawned 55 tornadoes in 36 hours in Jackson, Mississippi, and parts o…

The afternoon Hurricane Laura was brewing off Louisiana’s coast in late August, the National Weather Service issued rapid-fire tornado warnings around the Baton Rouge region. But only two formed, raising questions about the effectiveness of such alerts when they're beamed to peoples’ phones so frequently.

The 2016 summer floods that destroyed thousands of homes in the region changed people’s mindsets in how they prepare for severe weather, Broome said while speaking Thursday morning at her office of homeland security and emergency preparedness.

"I have to say, since we have had a number of these situations where we have been at MOHSEP dealing with potential weather events, our citizens have taken, I believe, our admonitions very seriously and have been prepared.”

As parish crews around the region cleared culverts, stacked sandbags and made other last-minute preparations, state and local officials urged residents to gather supplies and get to where they plan to ride out the storm by Friday morning.

Broome said people should make sure they have a three-day supply of food and medicine, as well as face coverings and hand sanitizer to mitigate the ongoing coronavirus pandemic should the storm require people to shelter.

Like several other parishes, Broome issued an emergency declaration for the city-parish earlier this week, giving local governments access to state and federal aid if needed.

Throughout the day Thursday, several government offices, schools and universities announced they will be closed on Friday, but some school districts plan to hold classes online. Among them are East Baton Rouge Public Schools, LSU and Southern University, which announced campus and school building closures for Friday.

As Hurricane Delta continues to intensify on its path towards the Gulf coast, some Baton Rouge area schools and agencies have announced closures.