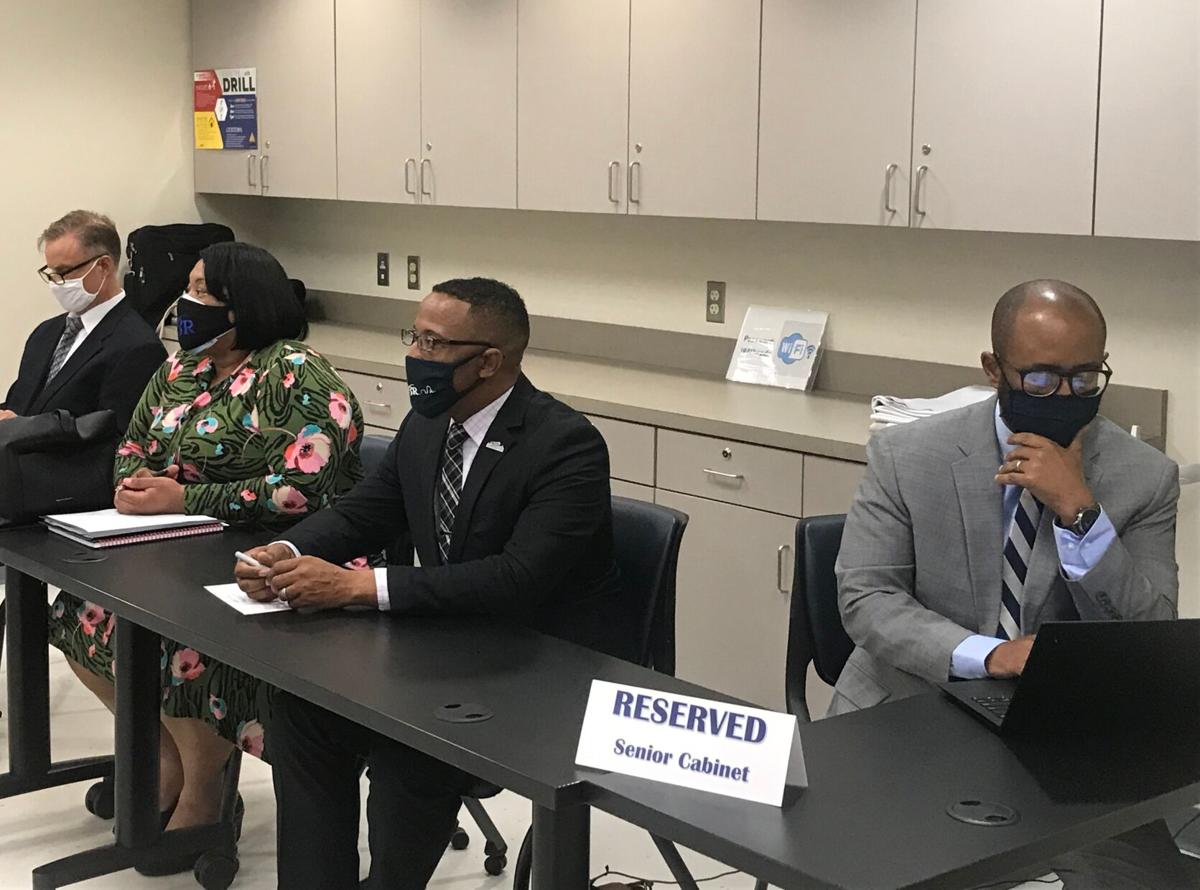 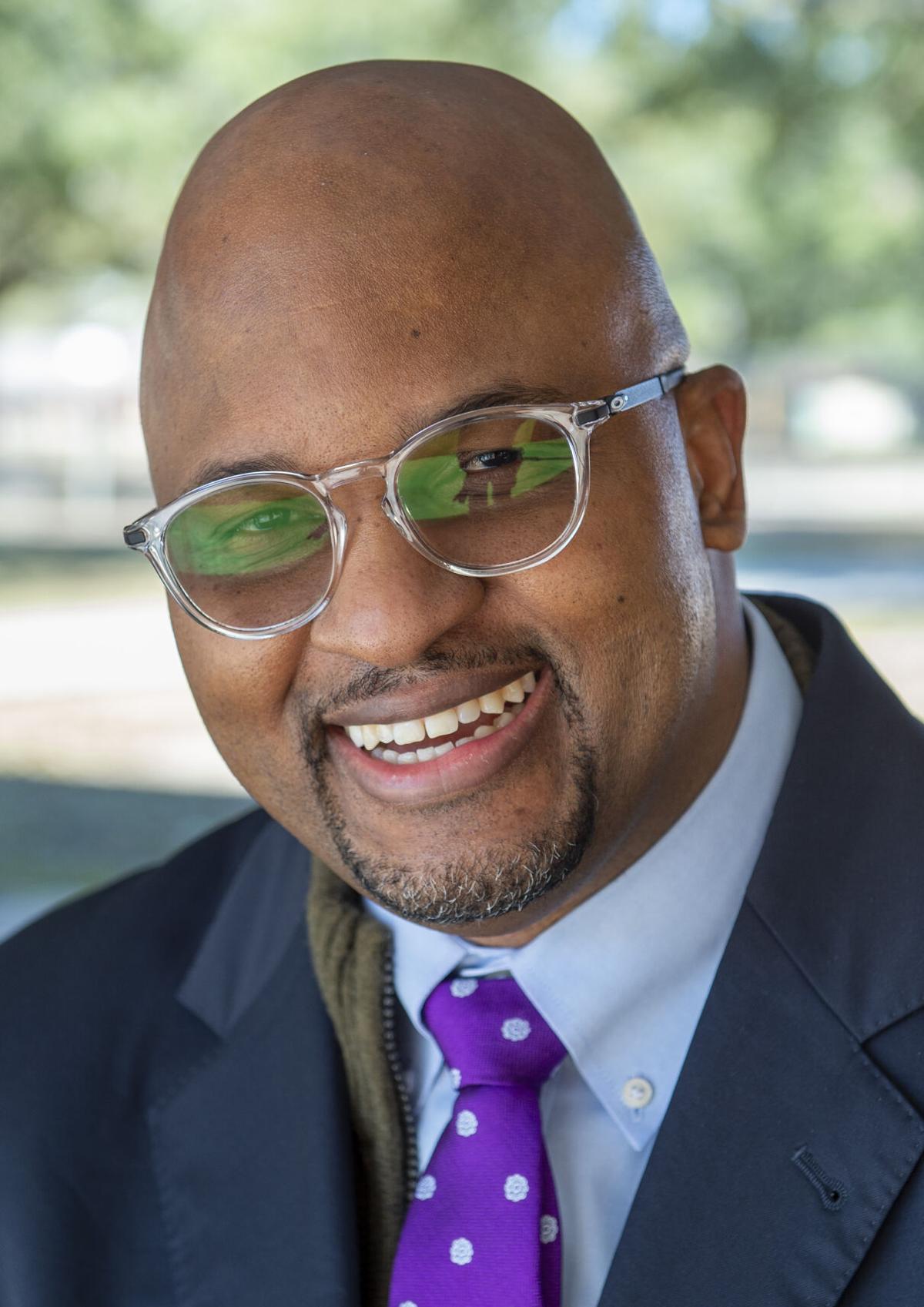 Newly selected East Baton Rouge Parish Superintendent Sito Narcisse. Narcisse answered questions during a press conference at Glen Oaks High School. He was joined by La. State Schools Supt. Cade Brumley, along with BESE members Preston Castille and Ronnie Morris Friday January 15, 2021, in Baton Rouge, La. They took a tour of the school and talked about the future of EBR. Narcisse, who is the chief of secondary schools in Washington, D.C., beat out EBR Interim Superintendent Adam Smith in a 5-4 vote.

Newly selected East Baton Rouge Parish Superintendent Sito Narcisse. Narcisse answered questions during a press conference at Glen Oaks High School. He was joined by La. State Schools Supt. Cade Brumley, along with BESE members Preston Castille and Ronnie Morris Friday January 15, 2021, in Baton Rouge, La. They took a tour of the school and talked about the future of EBR. Narcisse, who is the chief of secondary schools in Washington, D.C., beat out EBR Interim Superintendent Adam Smith in a 5-4 vote.

East Baton Rouge Parish schools superintendent Sito Narcisse has quickly hired four new top administrators, including a new chief academic officer who was a superintendent himself in a city in southeast Arkansas and has applied three times before for the job Narcisse now has.

With the exception of new Chief of Staff Caron Smith, all three are new to the school system. Two are new to Louisiana. All four have worked with Narcisse at one point or another.

They are part of a Central Office shakeup that Narcisse launched immediately after he was selected on Jan. 14 to lead Louisiana’s second largest traditional school district, home to more than 40,000 children. Narcisse settled for the four new hires after the parish School Board balked at his initial proposal to approve 24 new or revised job descriptions — he said he’ll revisit that plan in the near future.

Hired this past week, these four new administrators are each earning salaries of $130,000 a year, said Taylor Gast, a spokeswoman for the school system. They are senior cabinet level positions and report to Narcisse.

Despite the upfront cost, Narcisse has promised his reorganization will ultimately prove “budget neutral,” but has yet to lay out how he will do that.

C. Michael Robinson, a native of Lafourche Parish, is Narcisse’s new chief academic officer. He is the top academic person on Narcisse’s evolving leadership team, tasked with spearheading all educational programs and services for the school system. His most recent school job was as superintendent in Pine Bluff, Ark., 40 miles southeast of Little Rock.

Robinson told The Advocate he considers working in Baton Rouge a Louisiana homecoming after 20 years of working in other states, saying he's "very humbled' to help Narcisse "capitalize on the great things that have already been done and to give kids a world class education.”

Robinson and Chief of Staff Smith both started work this past week.

Smith is a Baton Rouge native who graduated from Scotlandville High and taught for four years at Belaire High. She left for an assistant principal job at a high school in Washington, D.C. She eventually became director of secondary academic scheduling and support for the D.C. school district. Narcisse and she ended up working together after he was hired in June 2019 as D.C’s chief of secondary schools, his last job before coming to Baton Rouge.

Hired but not yet on the job are new Chief of Operations Frank Chester and Chief of Schools Sharon Williams.

Chester, a native of West Virginia, previously worked as chief human resources officer in Pittsburgh — he worked there at the same time Narcisse was a school principal in Pittsburgh — and in a similar position in Bridgeport, Conn. He is starting this week.

Williams, a native of Nashville, was most recently chief academic officer for public schools in Holmes County, located in north central Mississippi. It’s an academically struggling rural district of about 3,000 students, most of them living below the poverty line.

Williams has worked in five states, including several years as a project director with the Center for Educational Leadership, or CEL, at the University of Washington. As a CEL consultant, she worked with Narcisse while he was with Nashville public schools, helping that district with principal supervision and support work. Last year, she interviewed to become superintendent of schools in Jackson-Madison County, Miss, but was not selected as a finalist. She has a doctorate in education from Tennessee State University in Nashville.

She is scheduled to start Feb. 19.

Robinson, the chief academic officer, is a particularly important hire. He has a superintendent certification that his boss does not.

Despite 18 years of school experience, Narcisse has only three years of classroom experience, not the minimum of five that the state requires for school superintendents. Narcisse can seek a certification waiver, but has yet to initiate that process, according to state officials. If he did, the earliest he could obtain a waiver would be June 10.

Robinson’s superintendent certification, however, allows Narcisse to be in compliance with state law.

A graduate of Thibodaux High, Robinson started teaching in 1996 in his home parish, but moved away in 1999 to teach in Houston and later to Atlanta before moving into school administration.

While in Georgia, Robinson earned masters, education specialist and doctoral degrees in educational leadership, the latter two from the distant Sarasota campus of the for-profit, but now-shuttered Argosy University. Robinson described his time with Argosy as a “phenomenal experience," which required him to drive hundreds of miles south from Georgia twice a month and during summer breaks to take classes.

Robinson has been elementary school principal in Greenville, Ga. and a “turnaround principal” at a middle school in Prince George's County, Maryland, where he was was promoted to director of priority and turnaround schools, with 13 schools under his supervision.

Narcisse and Robinson served in Prince George's until June 2016, when Robinson left for Pine Bluff, Ark. and Narcisse headed to Nashville where he spent three years as chief of schools.

Pine Bluff schools, home to about 3,000 schoolchildren, was a long troubled district when Robinson arrived, with persistent financial problems and decades of declining enrollment. Two of its nine schools were in “academic distress,” a state designation for schools where fewer than half of students scored at proficient levels on state math and literacy exams over three years.

The fifth superintendent in nine years, Robinson said he knew the job would be a challenge. As accomplishments, he points to the creation of a districtwide literacy plan, a new early learning center and the opening of an elementary school focused on entrepreneurship and STEAM — short for science, technology, engineering, arts and math.

“I was introducing them to innovation and technology, things that they were either doing minimally or not at all,” he said.

Robinson takes credit for a 5% increase in districtwide reading scores his first year and the exit of the two schools from academically distressed school list. Yet, when Robinson arrived, only one Pine Bluff school had a F letter grade from the state. By the time he left, under a revised letter grade system, five of the district’s schools had Fs. By contrast, schools across Arkansas generally improved their letter grades under the new system.

In Feb. 2018, the Pine Bluff board passed on a chance to renew Robinson’s contract and four months later he negotiated a $50,000 buyout allowing him to leave a year early. Three month later, the state of Arkansas took over management of Pine Bluff, appointing a new superintendent and dissolving the school board.

Robinson said it was his decision to cut short his stay in Pine Bluff.

“You work as a superintendent at the pleasure of the board and sometimes things don’t work out the way you want them to,” he said.

Ten individuals, including four former superintendents, have applied to become the next superintendent of the East Baton Rouge Parish school system.

In his most recent application, he said he learned “many valuable lessons” from his time in Pine Bluff that he would apply to a future job in Baton Rouge.

“This is my calling, and I am passionate about education,” Robinson said.