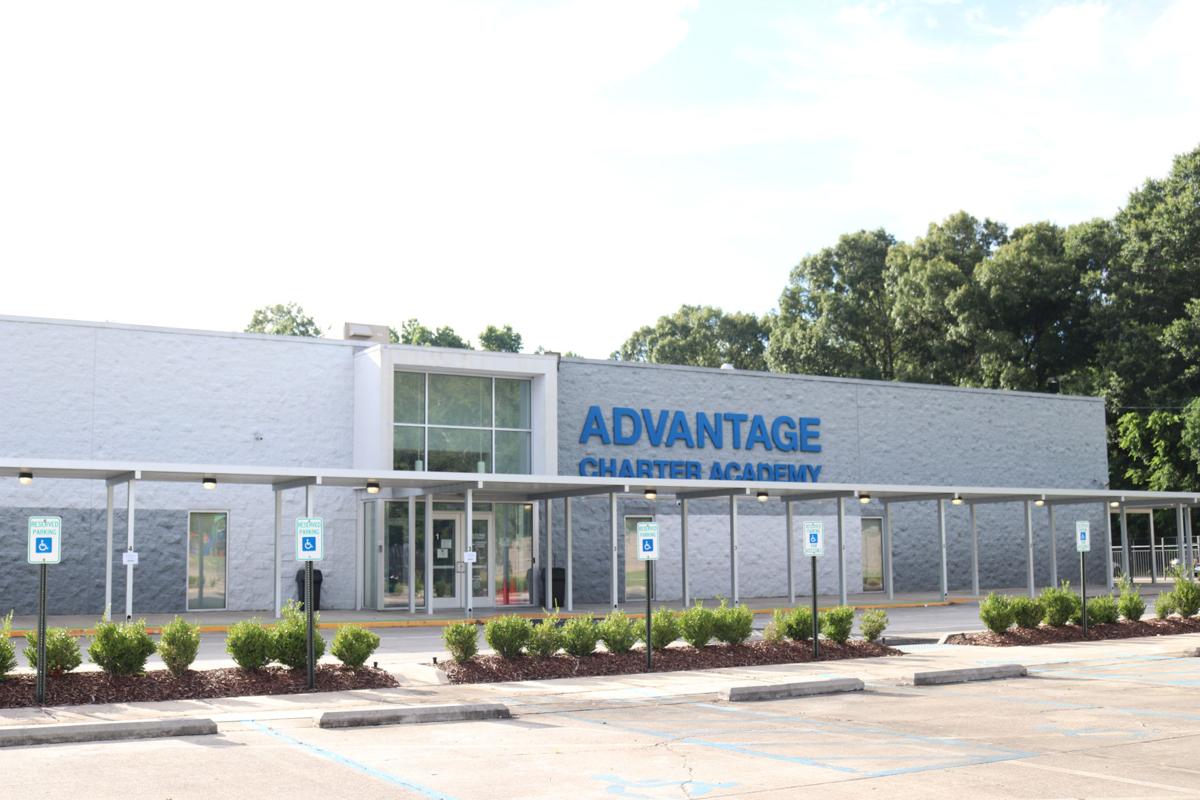 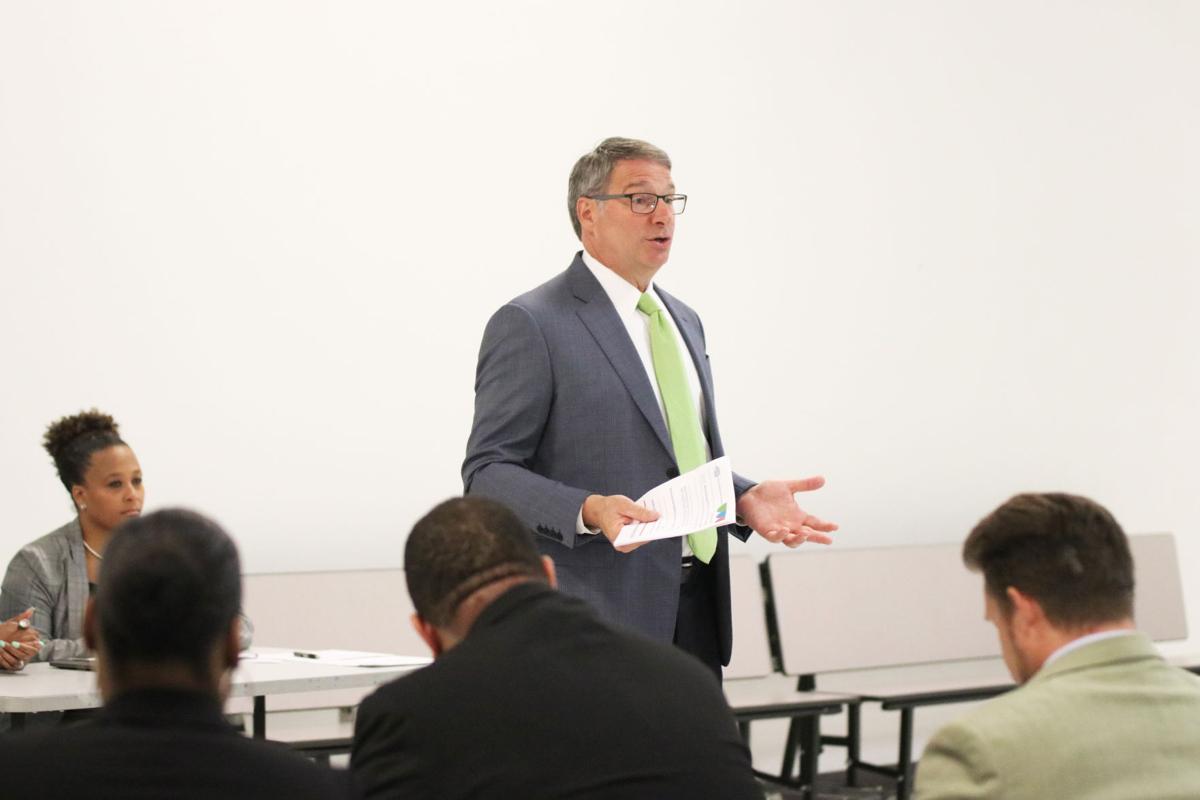 Walter Morales, president of the nonprofit Louisiana Achievement Charter Academies, which oversees Advantage Charter Academy in Baker, speaks at a special board meeting at the school on June 11, 2019.

Walter Morales, president of the nonprofit Louisiana Achievement Charter Academies, which oversees Advantage Charter Academy in Baker, speaks at a special board meeting at the school on June 11, 2019.

The president of the nonprofit board that oversees Advantage Charter Academy in Baker is telling the for-profit company that runs the school it needs to change direction soon or the board will start looking for another operator.

“If you come back in August and you’re running the school as you were running it before, it ends,” President Walter Morales told representatives of the Grand Rapids, Michigan-based National Heritage Academies, or NHA, during a board meeting in Baton Rouge this week.

Advantage was the subject of unflattering news coverage in late May after it told many parents during the last week of school that their children were being held back, despite many having passing grades. School officials quickly relented, allowing dozens more children to advance, saying they failed to inform parents early enough in the year that their children were in danger of repeating their grade.

Morales said his concerns go deeper than the bungled retentions.

“You run schools the same way across the country and it’s not working for us anymore,” Morales said. “We want radical transformation.”

Morales delivered his stinging remarks Monday at the monthly meeting of the seven-member board of directors for Louisiana Achievement Charter Academies.

In an interview after the meeting, Morales tempered his remarks, saying NHA has made some positive moves. Despite some parental and teacher discontent, he said, early indications are test scores are going up at Advantage. And NHA is listening to board concerns about the need for additional “wraparound” services and is hiring a group from New Orleans to do that.

Morales said he’s also hopeful NHA will improve other parts of its operation, including better communications with parents and the board.

“They’ve committed to a much better process to let everyone know what’s happening,” Morales said.

Morales said he and the rest of the board will be watching closely during the 2019-20 school year for signs of change and are prepared to change school operators if need be.

“There are numerous options of what to do if we replace the management companies,” he said.

The nonprofit over which Morales presides oversees two of the three NHA charter schools in the state: Advantage in Baker and Willow Charter Academy in Lafayette. Both opened in 2014. Morales sits on another board that oversees the third NHA school, Inspire Charter Academy, which opened in Baton Rouge in 2010.

Harrison noted that Advantage recently hired four new administrators, two of them former principals, to help Advantage’s new principal Ashley Chavis. And he said he’s working with Chavis and this new team to improve communications, which he said is a commonly-voiced complaint by parents.

But Harrison is resisting calls to fire Chavis, saying he remains certain she can lead the school effectively. He noted she took over the school midyear, which is always hard and something he did three years ago at Willow.

In its first three years of operation, Advantage retained just 23 students in the same grade.

But last August, NHA informed the board that the company was taking a harder line. Students who are doing poorly in reading would be held back. Morales said he liked what he heard at the time.

Many kids at Advantage are subpar in reading. Indeed, when Advantage third-graders last fall took DIBELS, an early literacy test required by the state, only 12 percent of them scored on grade level or above.

But in practice, holding so many students back didn’t work so well.

Harrison said NHA decided whether students should be held back based on whether they met a cutoff score the company set on a common standardized test known as the NWEA MAP test, which NHA students across the country take at the beginning and the end of the school year.

Relying heavily on the end-of-year NWEA results, 115 Advantage students and 110 Willow students learned on their final report cards that they were being held back, Harrison said. That’s more than a sixth of the students at both schools.

After the controversy, the schools reconsidered some of those decisions, shrinking the list of repeaters to about 60 to 70 repeaters at Advantage and “a little bit more at Willow,” Harrison said.

At Monday’s board meeting, Morales said the board didn’t realize the NWEA results would prove so crucial.

“That this test was going to be the dominant thing in whether students were going to be retained, none of us knew this,” he said.

Morales, however, said Willow and Inspire, which also held back more kids this year, appeared to do a better job communicating the change to parents. But fellow board member Anthony Jackson wasn’t so sure.

“It happened at every school, just Advantage got on the news,” Jackson said.

Harrison said he expects retention numbers will decrease next year.

“We’re going to offer more intervention and Saturday school to help those who are struggling in reading,” Harrison said.

Morales said he too thinks NHA can obviate the need to hold back so many students next year.

“This was a hopefully one-time shift,” he said.

Why did a Baker charter school hold back so many kids? Here's what they say, but questions remain