Brandon Dumas, the recently fired vice chancellor of Southern University, filed suit against his former employers Thursday morning -- less than a month after his termination amid questions about his potential involvement in a sex tape that was widely circulated among campus faculty and alumni.

In his suit, Dumas claims that the Southern University Board of Supervisors did not follow proper procedures when it effectively voted to uphold a decision to fire him, and he argues that the board action should be voided.

Dumas was given notice last month by Southern University President Ray Belton that he was fired, effective Aug. 10. Belton did not disclose the reason for the decision, but Dumas had already been placed on administrative leave days after the school acknowledged it was investigating a sex tape that may have involved an employee and a student. Officials did not publicly identify Dumas as the person being investigated.

Dumas appealed his termination to the Board of Supervisors, but the board ultimately voted to uphold Belton's decision. Dumas made no public comments, and his hearing was held in executive session, out of view of the public. But during public discussion of the termination hearing, the board and the board's attorney discussed the investigation into the sex tape, confirming that it was at least a major contributing factor to his dismissal.

Dumas's petition does not mention the reason he was fired. It contests the process that played out during the appeal by the Board of Supervisors, saying that Belton did not have unilateral authority to fire Dumas without an affirmative vote of approval by the board.

Immediately following the closed-door appeal hearing, board members did not move to grant or deny the appeal. Eventually, Board member Tony Clayton made a complicated motion that asked for the decision to be delayed for 60 days after a deeper investigation into the claims could be conducted. The effect of the motion, according to the board's attorney Winston Decuir Jr., would have been to grant the appeal. But the motion failed, meaning the decision to fire Dumas was in effect upheld, DeCuir said.

But in his petition, Dumas said the board never actually voted on Belton's recommendation. He said the board needed to make an affirmative vote to terminate him for the action to have legal force.

Neither Dumas' attorneys nor those representing the university were immediately available for comment.

In his filing, Dumas contends that he served Southern University "with honor and integrity," and points out that as recently as April, Belton endorsed Dumas when he applied to be president of Paine College. In a letter cited in the petition, Belton said Dumas "served the University well in various capacities" and with "distinction."

The suit was filed against the Southern University Board of Supervisors by Dumas and assigned to 19th Judicial District Court Judge Janice Clark.

Dumas served as one of four vice chancellors who answered directly to Belton, overseeing student affairs and enrollment management.

According to his university biography, Dumas became one of the youngest administrators in the history of the institution in 2012, when he was named vice chancellor for student affairs at the age of 27. He was promoted to vice chancellor of student affairs and enrollment management in 2014. At the time of his initial appointment, Dumas's father sat on Southern's Board of Supervisors, which approves salary increases and administrative hires.

The Council on Aging has also been under fire since it was revealed that the executive director Tasha Clark-Amar was written into a client's will as the executor and was set to receive $120,000 from the trust over 20 years, far above the going rate. After being sued, Clark-Amar agreed to step back from the position, though she has denied wrong doing.

Clark-Amar is the daughter of Clark, the judge assigned to preside over Dumas's lawsuit. 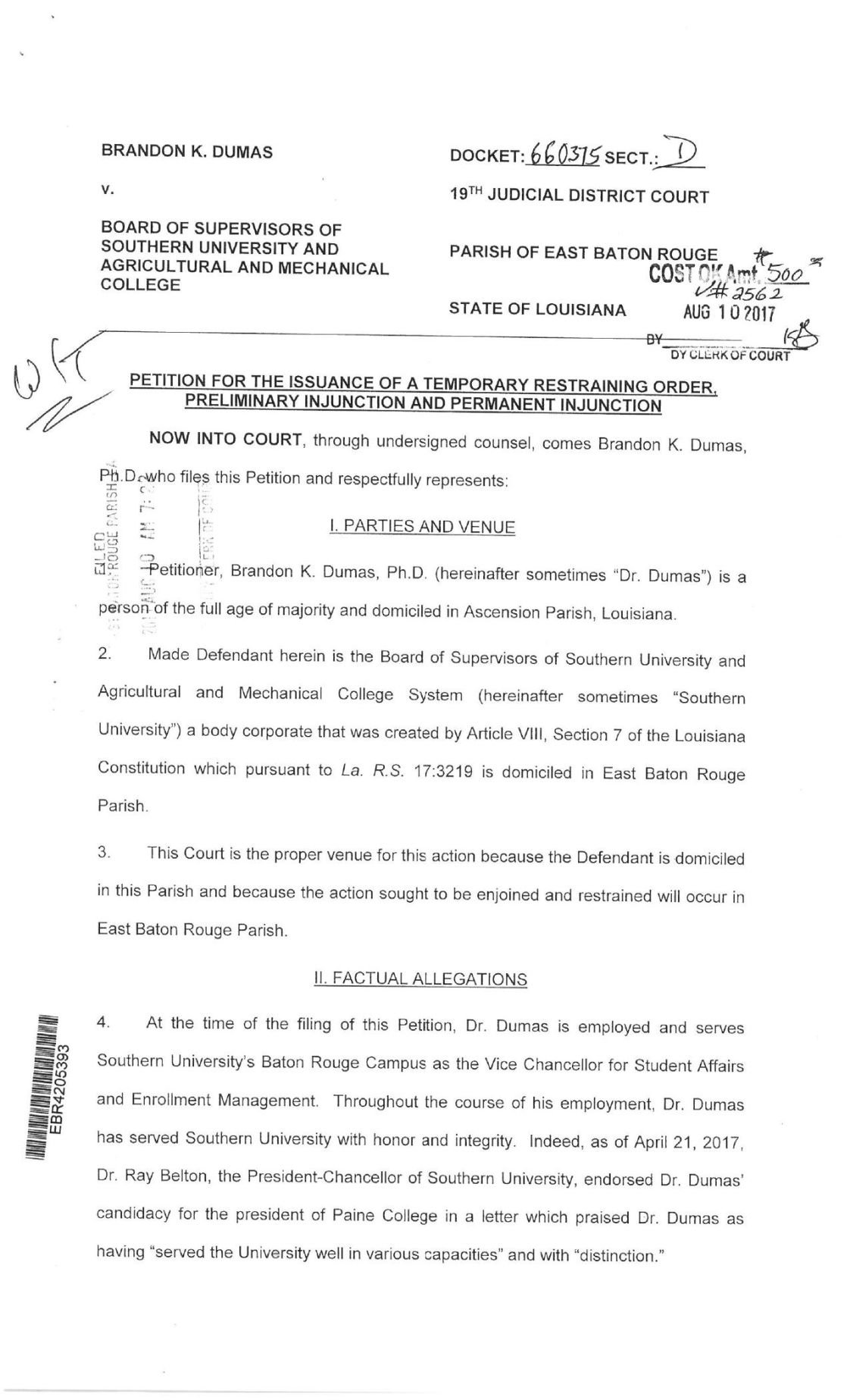 With big increase in budget, Council on Aging board worries City Hall now overcharging them for building

Citing a need for change, Southern University fired two administrators last week who had both worked under Brandon Dumas before he was fired a…

Southern University's recent firing of Vice Chancellor Brandon Dumas was handled properly, and his lawsuit against the school should be dismis…