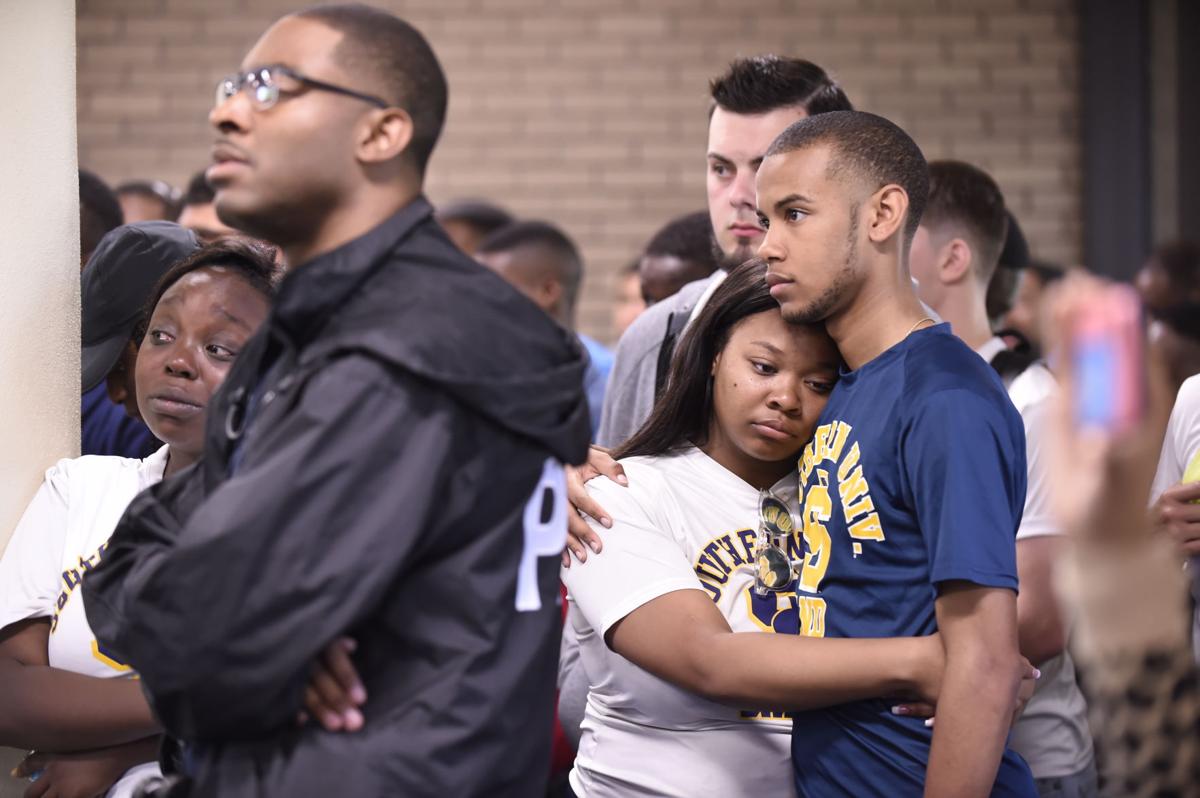 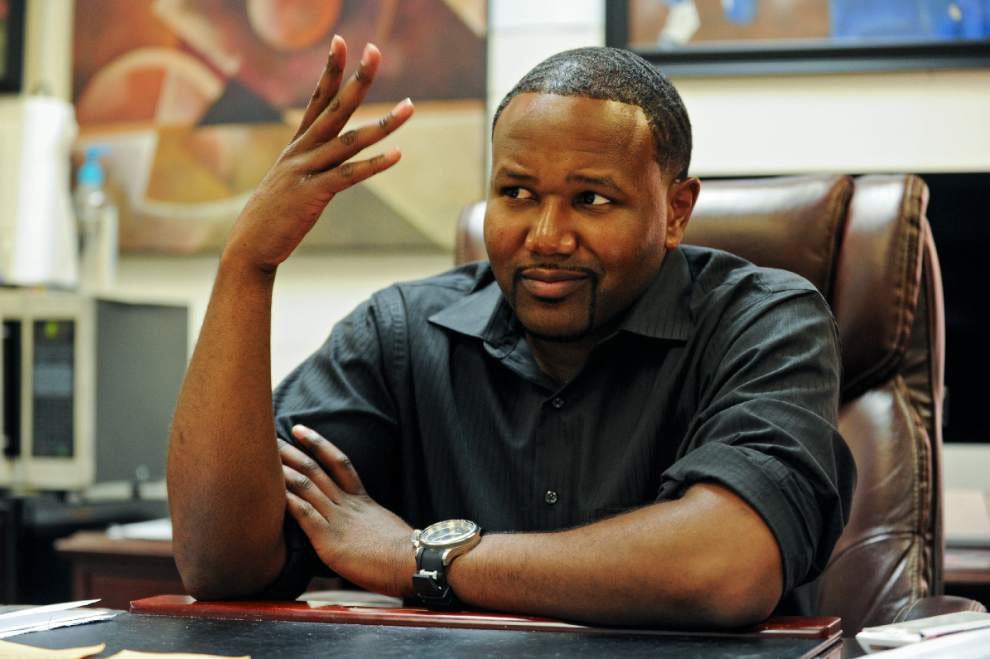 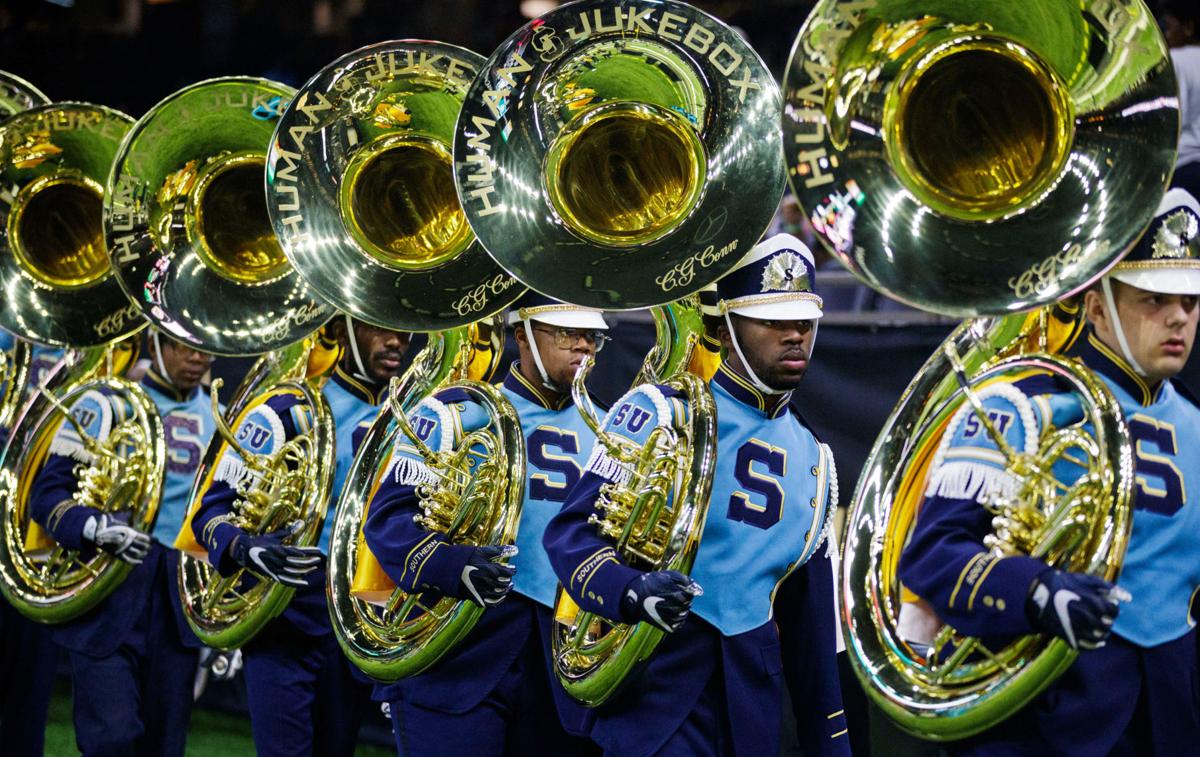 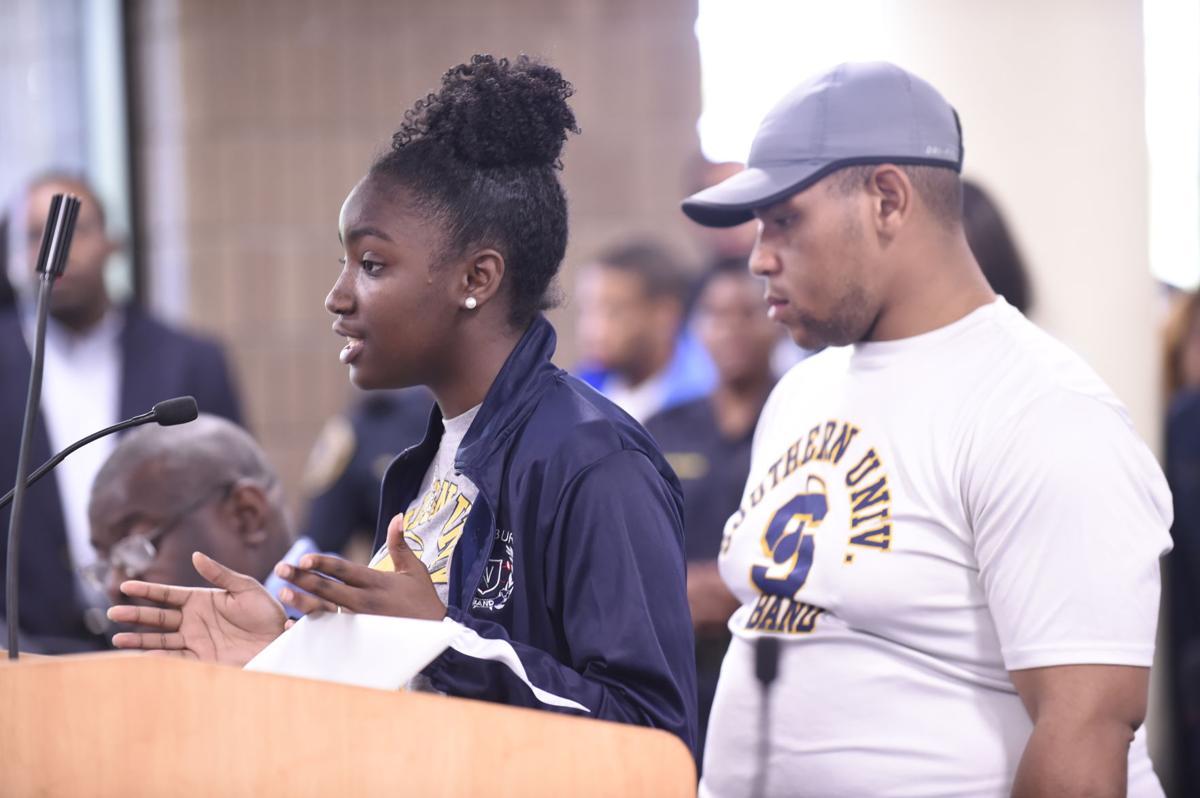 Members of Southern University's famed Human Jukebox crowded into the Southern Board of Supervisors meeting Friday, pleading the case for their band director to keep his job.

Newly released emails between Haymer and several New Orleans Mardi Gras krewes also include a few questionable requests by the band director. These 270 pages of emails were gathered in response to a public records request by WBRZ-TV and subsequently released to The Advocate.

Janene Tate, a spokeswoman for Southern, said the lawsuit, which was filed in January, prompted an internal investigation that is ongoing, but she said that Haymer remains the band director.

But students on Friday morning were still concerned that his departure was imminent, urging the school to keep him. "He’ll do anything and everything to make sure he has everything we need. So please reconsider and keep our band director," said Makayla Lundy, a senior.

Micheal Bingham, also a senior, said Haymer "serves as a leader. He serves as a father figure to me."

In response, President-Chancellor Ray Belton praised the students for their passion, but said he couldn't discuss any details about Haymer's employment.

"This band literally defines Southern University. I can’t say how proud I am of the courage you’ve showing this morning in coming before this board," Belton said to students.

Jonathan Dearbone, class of ‘93, and a former band member, said Haymer spoke at a band banquet Thursday night at the Student Union at Southern, saying that he essentially had been given the choice of resigning or being fired.

Dearbone said that Haymer was planning to hand out awards at the banquet, but said he couldn’t because he was locked out of his office. Tate said that was a “miscommunication,” and that Haymer’s job status is unchanged.

Haymer was not present at Friday’s morning board meeting. His brother, Niles Haymer, an attorney in Baton Rouge, was present but didn’t say anything. After the meeting, he wrote on his Facebook page to say, “My heart was filled with pride as I watched students from the SU Marching Band show up to the Board of Supervisors meeting to support their leader Nathan B. Haymer! There is no official decision but the message was well sent by these students.”

Nathan and Niles Haymer did not return calls and messages Friday seeking comment.

Julian Jackson, class of ‘77 and a former band member, said he canceled all his appointments and drove up from New Orleans to be at Friday’s meeting. He said he was about to donate money to the university but stopped when he learned Haymer might be leaving.

Haymer was an assistant band leader at the university when he was named band director in 2014.

“If Haymer won’t be here, I won’t be around Southern University,” Jackson said.

Dearbone asked the board of supervisors Friday morning for understanding, whatever Haymer did.

The lawsuit against Haymer and Southern was filed earlier this year, with the owner of Baton Rouge-based Octagon Media alleging he reneged on band appearances after she refused to fulfill a kickback request and brought it to the attention of Southern officials.

Amy Newsom, the attorney representing Octagon Media, said the university is doing its own investigation of Haymer, and she doesn’t know to what extent the band director’s current troubles stem from her lawsuit. She said she was not seeking to have him fired.

“That was not our goal,” Newsom said. “It was to hold Southern to the promise they made to my client."

According to the lawsuit, in 2015, Maranda White, the owner of Octagon Media, arranged with Haymer for the Human Jukebox to be the main attraction at an event for various public schools. He entered into an agreement for the band to play and for the Dancing Dolls to also appear.

But ten days before the event in November, White received a text message from Haymer. In that text, he requested a check be written to him that would be hidden from the business, according to a lawsuit.

“Yes, the ten percent needs to be a check made payable to me so that the staff can be properly compensated. I am asking for you to hide this ten percent in your percentage charge from your business. If this cannot be done, please let me know," the text read, according to the lawsuit.

White says that after she balked at paying money under the table, Haymer began to back out of the event and then canceled it.

White subsequently met with higher ups at Southern, including the general counsel, Tracie Woods, and Provost Christopher Brown, the lawsuit claims. They entered into a written contract for the Human Jukebox to appear at the event, but they didn’t show up. Haymer also subsequently did not show up at a Jan. 22, 2016, Mardi Gras ball where the band was also scheduled to appear, as well as a tourism event in the fall of 2016. In all of these events, Octagon Media had to pay back money to various entities because of the no shows, the suit says.

Haymer’s emails that were released Friday cover communications between Haymer during Carnival season 2018. He corresponded with the krewes of Bacchus, Zulu, Femme Fatale, Poseidon and Nyx, as well as organizers of other events during that time period.

In a few emails, Haymer suggests restructuring of payments in ways that raise questions, or he asks that money be paid to him directly.

In a Jan. 8 email to a representative of the Krewe of Femme Fatale, Haymer says that $3,300 in travel costs should be paid by reducing the band’s honorarium by $2,000 and his personal honorarium by $1,300.

On Jan. 10, while corresponding with a representative of the Krewe of Zulu, Haymer specifies to “make check payable to Nathan B. Haymer for $3,000.”