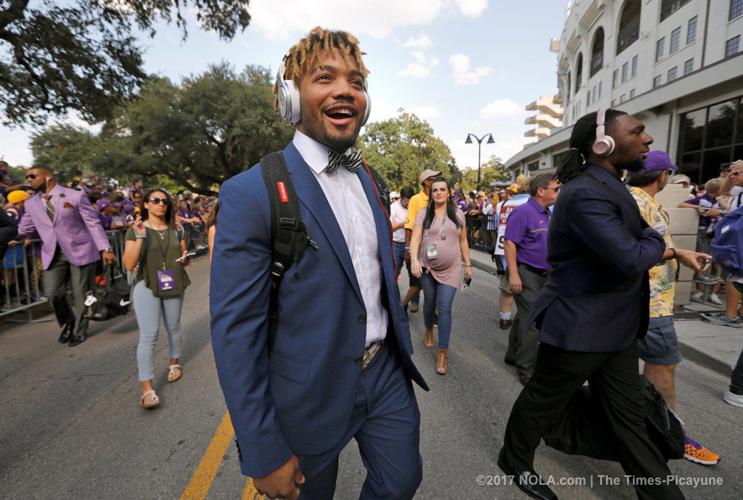 LSU Tigers running back Derrius Guice (5) makes his way into the stadium before the Tigers take on the Troy Trojans in Baton Rouge on Saturday, September 30, 2017. (Brett Duke, NOLA.com | The Times-Picayune) 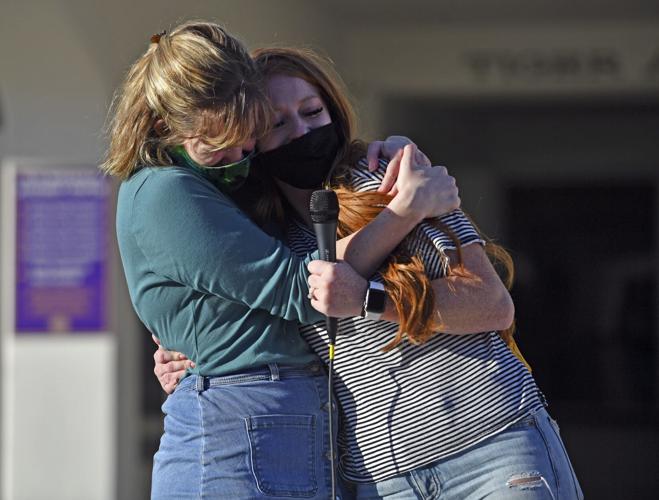 LSU Tigers running back Derrius Guice (5) makes his way into the stadium before the Tigers take on the Troy Trojans in Baton Rouge on Saturday, September 30, 2017. (Brett Duke, NOLA.com | The Times-Picayune)

Three more women have come forward to publicly blast LSU's handling of their complaints of rape and sexual harassment — two involving football players, one involving a professor — as part of a broader lawsuit that says the university has failed to properly investigate sexual misconduct allegations on campus.

A group of seven current and former students filed a federal Title IX lawsuit against LSU in April, saying the university “repeatedly engaged in discriminatory, retaliatory, and other unlawful actions” when the students tried to report rape, domestic violence and other problems on campus. An amended complaint filed Friday in Louisiana's Middle District lists three additional women as plaintiffs. The updated filings also list some new defendants, including a corporation, "O" The Rosy Finch Boyz LLC, that lists LSU head football coach Ed Orgeron as an officer.

The updated complaint adds to allegations against former LSU star running back Derrius Guice, whose statistics were stripped from LSU record books after a handful of women accused him of sexual assault and sexual harassment. The lawsuit refers to him as "John Doe," but the women who have publicly accused Guice of misconduct are named in the lawsuit.

Domestic violence charges against Derrius Guice, a former running back for LSU and the Washington Football Team, have been dismissed after Gui…

The latest to come forward is Ashlyn Robertson, who enrolled at LSU in 2015. Robertson hosted a 2016 party at her apartment that Guice attended without being invited, according to the lawsuit. Robertson said she was passed out on her bed when Guice entered her room and raped her. Her friends on the football team later told her that Guice bragged about having sex with her, according to the lawsuit.

She visited LSU's Student Health Center a few days later, where she discovered she had "contracted chlamydia as a result of the rape" and "a nurse told Robertson it was better to not pursue an investigation," according to the lawsuit.

But by that point, some LSU staff members knew about it anyway: Robertson told a friend on the LSU diving team about it and the friend's mother reported it to LSU's diving coach, according to the lawsuit. The coach reported it to Senior Associate Athletic Director Miriam Segar, the lawsuit says.

About a week later, LSU's former dean of students, Mari Fuentes-Martin, emailed Robertson to ask if she wanted to pursue a Title IX investigation, and Robertson declined. Fuentes-Martin is also now named as a defendant in the lawsuit.

Robertson said that Guice nonetheless began a campaign against her; she said she hid in her room when he visited her apartment in 2016. He eventually found her and "harassed her about 'spreading rumors.' John Doe told Robertson he had 'a gun with [her] name on it,'" according to the lawsuit.

When Robertson later told her boyfriend, an LSU football recruit, about the sexual assault, her boyfriend approached Orgeron about it, the lawsuit says. The boyfriend is not named in the court filings.

"Orgeron responded by telling Robertson’s boyfriend to not be upset because 'everybody’s girlfriend sleeps with other people,'" the lawsuit says.

USA Today first reported last year on Robertson's story without naming her and included Orgeron's alleged comments in their reporting. But Orgeron issued a statement at the time denying that he knew about rape allegations against Guice and saying that the quote attributed to him was "not accurate."

The updated lawsuit says Orgeron failed to report the rape allegation to LSU's Title IX Office or any other entity.

"We are reviewing this update to a previously filed lawsuit, but as stated before, we are focused on taking actions to ensure that we create a campus that is safe, just and worthy of the trust that has been placed in us," said LSU spokesman Ernie Ballard on Friday afternoon.

Robertson said in the lawsuit that the rape sent her into a downward spiral, and that she turned to alcohol, drugs and hypersexual behavior to help cope with her trauma. She was arrested on drug counts, went to rehab twice and left LSU after losing her TOPS scholarship. The lawsuit says she cannot transfer to another university because LSU will not release her transcript until she pays back the rest of her TOPS scholarship.

Guice was arrested last year in Virginia on domestic violence charges, which led to him being cut from the Washington Football Team. Those charges were dropped this week, however, after Guice reached a pretrial settlement with his accuser. He has not been convicted of any sexual assault or battery crimes, and has never been arrested on any allegations related to his behavior at LSU. His attorney did not return a message for this story, but has previously denied that Guice did anything wrong during his time at LSU.

Two months after the U.S. Department of Education launched an investigation into how LSU reports and investigates crimes on campus, the same f…

Corinn Hovis, who enrolled at LSU in 2019, said that she went to a Tigerland Bar in 2020 where she met "a highly recruited quarterback on LSU’s football team." The lawsuit refers to him as "John Loe," but says he transferred to another university on Aug. 6, 2020 — a profile that matches that of Peter Parrish.

Hovis alleges in the lawsuit that she left the bar with the player in a highly intoxicated state, and that he raped her while she was blacked out in an SUV. She tried to file a report with LSU Police, but LSUPD referred the case to the Baton Rouge Police Department because it happened off campus, according to the suit. It says that BRPD officers refused to take a statement from her, while LSUPD disagreed and took her to a hospital for a rape assessment, which found bruising on her cervix.

Hovis opted to pursue a Title IX investigation, and the football player was found responsible for sexual assault, according to the lawsuit. He was suspended from May 10, 2020 through May 31, 2021, and issued a no-contact directive that the lawsuit says he violated. But he then transferred to another university.

Parrish is now on the football roster at the University of Memphis. An unnamed LSU football player who matches his description and was suspended from LSU on May 10, 2020, filed a Title IX complaint against LSU last year in federal court that said he was denied due process under LSU's disciplinary process. The attorneys in that case did not return messages for this story.

Hovis has struggled in the aftermath of the investigation, and has needed medical intervention for post-traumatic stress, depression and more, according to the lawsuit.

The third new plaintiff in the lawsuit is Sarah Beth Kitch, a former LSU graduate student who enrolled in LSU's political science Ph.D. program in 2009. Her adviser, referred to in the petition as "John Moe," sexually harassed her as she studied under him, the lawsuit says.

"Moe’s sexual harassment of Kitch gradually increased during her time at LSU, including but not limited to requesting that Kitch wear high heels, expressing interest in a sexual relationship with Kitch, propositioning sexual favors from Kitch, discussing how women should 'spread their legs wide open,' and requesting that Kitch come to Moe’s house alone at night," the lawsuit says.

Kitch finished her doctorate in 2014, but the trauma of her interactions with her adviser lingered, according to the lawsuit. After working at other universities, she reported her adviser in 2019 to LSU's Title IX office in hopes that LSU would have a record of the harassment in case other students experienced the same.

Appearing before a committee at the state Capitol on Wednesday, Abby Owens identified herself publicly for the first time as a survivor of a s…

But when she filed her report, LSU officials "informed Kitch that it was a good choice not to report the harassment when she was a student because 'no one would have done anything' and she would have faced consequences as a result of the report," the lawsuit says.

In each case, the plaintiffs say that they were not aware until LSU released its Husch Blackwell report this year that the university's problems with addressing sexual assault were so pervasive.

The women are pushing for class-action status, alleging that LSU was deliberately indifferent to sex discrimination on campus, fostered a hostile environment, denied equal protection to all students and more. They are also pursuing civil conspiracy claims under the Racketeer Influenced and Corrupt Organizations Act, or RICO, which is the federal law often used to take down organized crime syndicates.

The women are asking for statutory and punitive damages expected to exceed $5 million, attorney's fees and court costs and a permanent injunction "requiring compliance with Title IX and recurring external audits of LSU’s Title IX compliance."