The cafeteria of West Jefferson High School is allowed to have 25 students at a time in the configuration seen during a tour showing coronavirus precautions of the campus in Harvey, La. Wednesday, Aug. 19, 2020. If a divider is installed in the cafeteria, 50 students will be allowed in the room at the same time. The school is scheduled to open on August 26. (Photo by Max Becherer, NOLA.com, The Times-Picayune | The New Orleans Advocate) 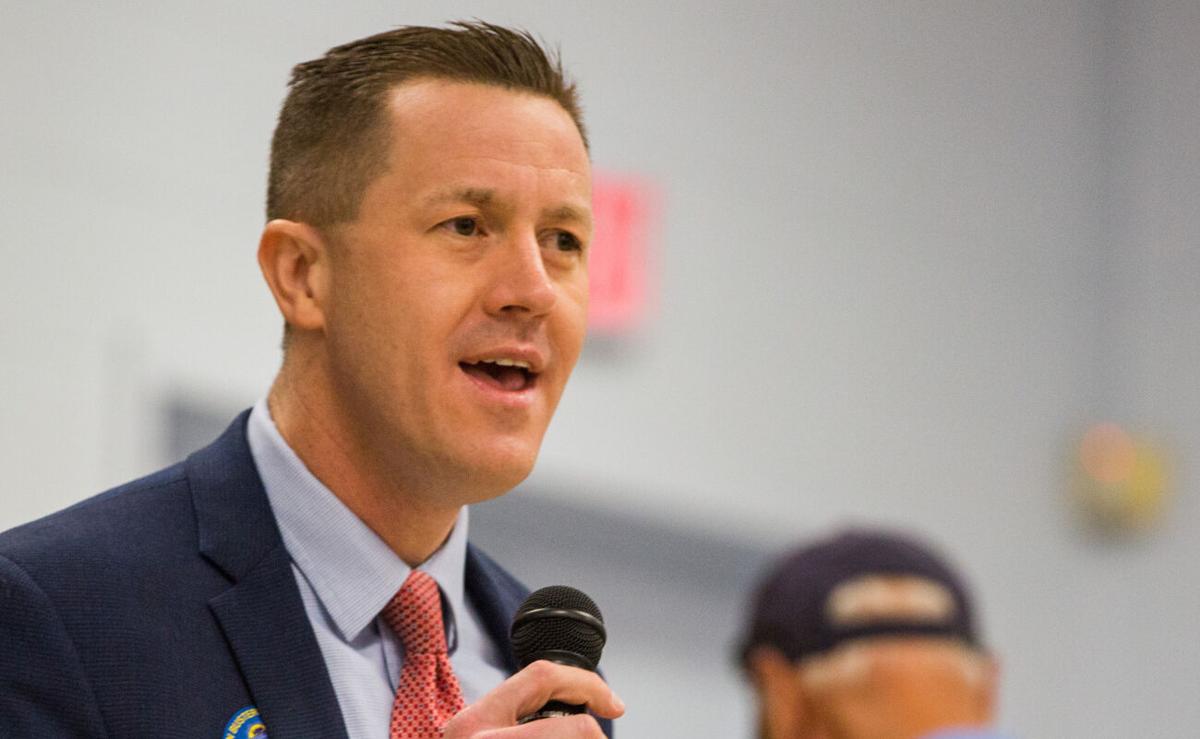 State Superintendent of Education Cade Brumley said Thursday about 3,500 of 800,000 students statewide have tested positive for the coronavirus.

"We can all agree that we want to get better," he said.

State Superintendent of Education Cade Brumley said Thursday about 3,500 of 800,000 students statewide have tested positive for the coronavirus.

The rollout includes a wide range of possibilities, not a finished product ready for final action.

But it also represents one of the first times Brumley has sought to put his imprint on school operations beyond the daily problems caused by the coronavirus pandemic, which was well underway when he started the job on June 8.

The list of ideas includes a new focus on addressing literacy woes from kindergarten through second grade; ensuring students have mastered essential skills by the fourth grade and changing how children in grades 3-8 are tested and how often.

The overhaul would be the first of its kind since the state launched its latest bid to improve student performance more than 20 years ago.

That effort was aimed largely at requiring that students demonstrate minimal skills before they are promoted to the next grade, and to end years of "social" promotions.

But students are still falling short in all six "critical goals" spelled out by the state Department of Education, including kindergarten readiness, students mastering key skills by the fourth grade and leaving high school ready for college or a career.

Only 43% of kindergarten students are reading on grade level, less than half of third-graders demonstrate mastery of key subjects and more than half of ninth-graders have failed to to demonstrate the needed knowledge on top subjects, according to the department.

Eight of 10 high school students graduate on time – low by national standards – and about half of those graduates will earn a degree that includes basic or advanced credentials.

The report said just over 60% of high school graduates qualify for a college tuition college scholarship – called TOPS for the Taylor Opportunity Program for Students – and that increasing problems with students earning a modest score on the ACT is the chief culprit.

In 2018-19 a total of 17% of high school graduates failed to qualify for TOPS because they could not achieve the minimum required score on the ACT, which is supposed to measure college readiness.

The state's latest composite score on the ACT is 18.7 out of 36, the lowest score in the past seven years.

Setting off alarm bells, Louisiana's score on a test of college readiness called the ACT fell for the third consecutive year and is the lowest…

Brumley made his comments to the Accountability Commission, a panel of educators and others that makes recommendations to the state Board of Elementary and Secondary Education.

BESE would have to approve the changes, and possibly the U.S. Department of Education.

The superintendent said he is trying to get a public conversation going on a topic that has clearly been the subject of extensive discussions at the state Department of Education. "We are throwing ideas out there and see if we can go somewhere together," he said.

Some members of the commission peppered state officials with questions about the possible changes, and the panel voted to continue discussions on any overhaul.

Debra Schum, a former commission member who now sits on the St. John the Baptist Parish school board, said public school accountability needs to be discussed.

"It is something we really need to clean up on how we measure our schools and our students," said Schum, former executive director of the Louisiana Association of Principals.

The problems discussed Monday appear most focused on students from kindergarten through eighth grade.

While two-thirds of public high schools landed an "A" or "B" rating from the state only 40% of K-8th grade schools did so. The state's scrutiny of schools has long focused on grades 3-8 and high school.

Who controls when schools reopen? In Louisiana, local educators have the final say

While Louisiana's top school board and other state leaders are providing guidance, when public schools start and what formats they use for ins…

Brumley said that needs to be expanded to students from kindergarten through second grade, especially with Louisiana's longstanding literacy problem among early learners.

"This K-2 piece is something I have heard over and over again, to make sure we are focused on what is happening in that early education space," he said.

The changes would include end-of-year literacy screenings in all three years, including a snapshot of yearly progress aimed at addressing any achievement gaps before children reach the third grade.

In another area, the state would replace annual, end-of-year exams in English and social studies with periodic exams throughout the year that combines both subjects.

That would allow teachers to measure a student's knowledge of texts and passages while also allowing students to learn at the same pace "so that no student is at a disadvantage due to a lack of life experiences," according to a department document.

Doing so could also trim test-taking in grades 3-8 from 5,335 minutes to 4,600 minutes – addressing a longtime complaint from educators.

He said only 40% of high school seniors carry a full course-load, a longtime problem that often leads to shortened school days.

"We want to create some additional possibilities," he said.

Louisiana schools are grappling with laptop shortages, saying 'the backup is unbelievable'