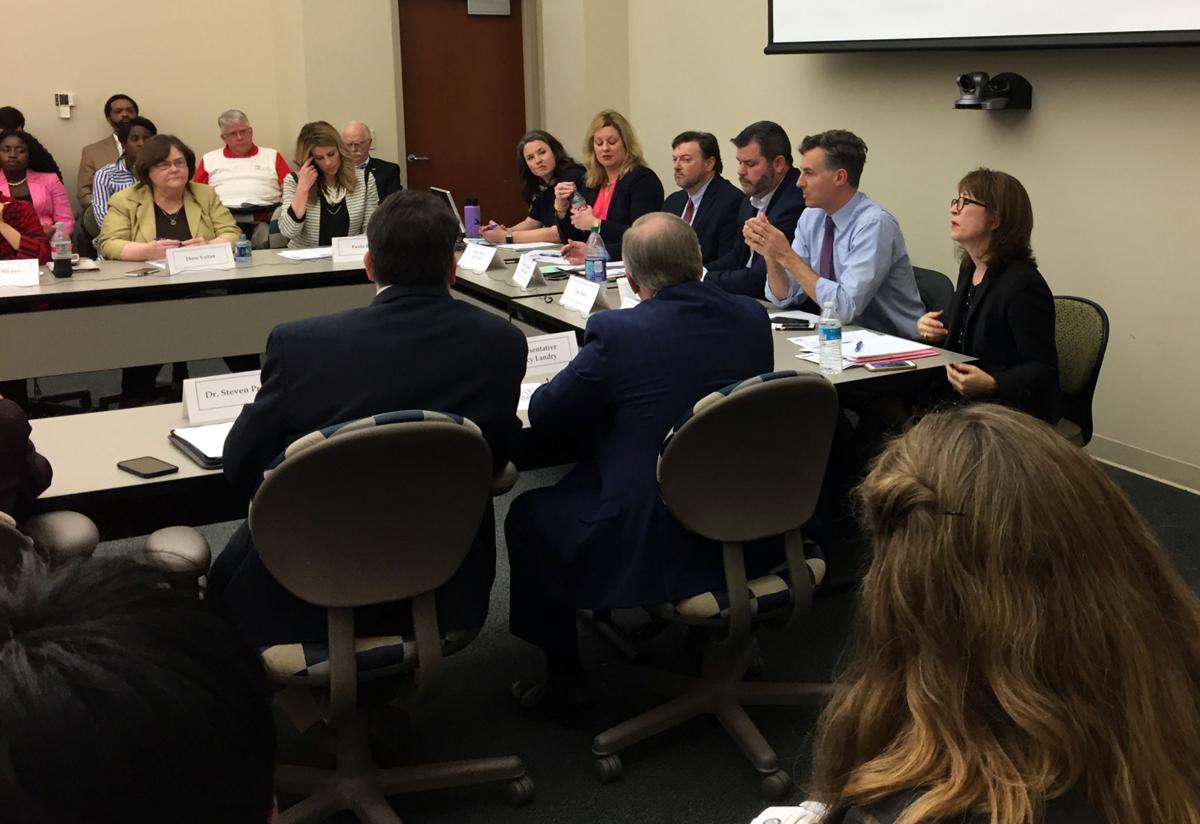 An influential state panel Thursday endorsed Gov. John Bel Edwards' proposal to boost teacher pay by $1,000 and basic state aid for public schools by $39 million. At the head table, from right, are Beth Scioneaux, deputy state superintendent of education; John White, state superintendent of education; and Tony Davis, a member of the state Board of Elementary and Secondary Education and chairman of the task force. The recommendation goes to BESE, which makes its request to the Legislature this month. 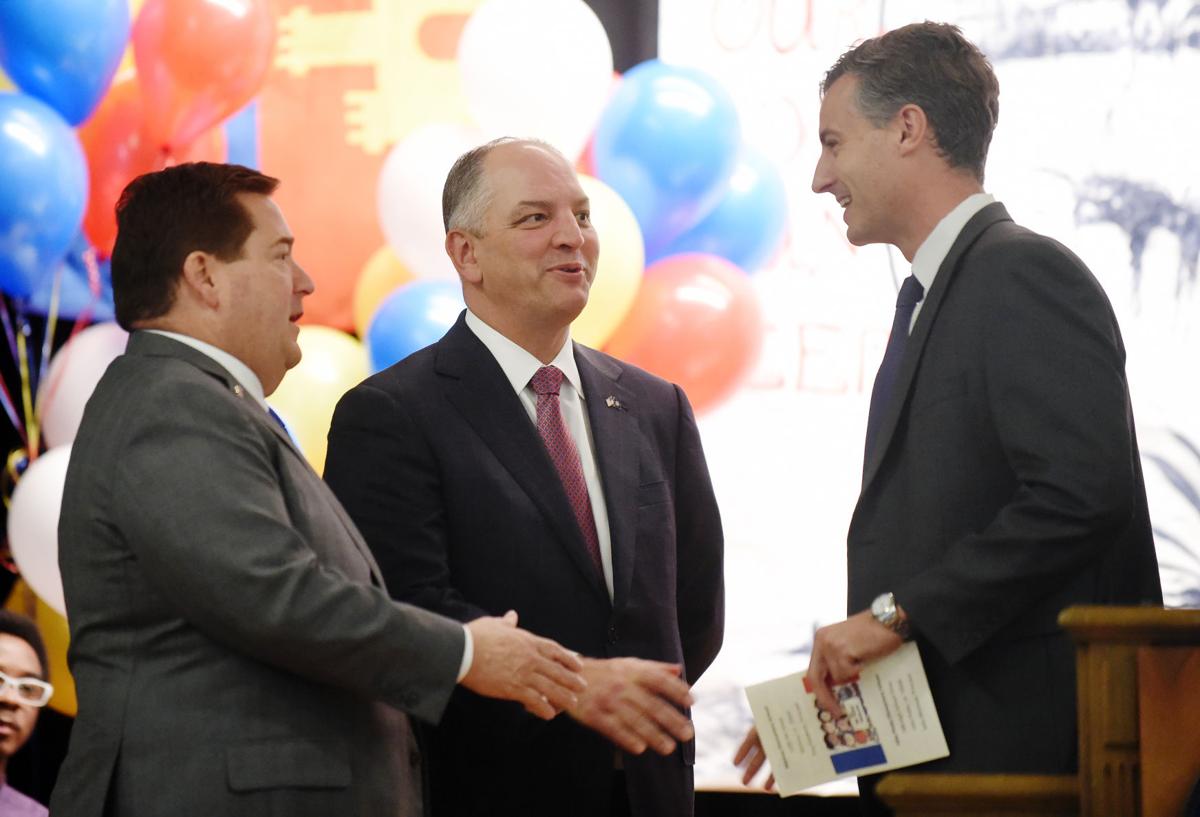 An influential state panel Thursday endorsed Gov. John Bel Edwards' proposal to boost teacher pay by $1,000 and basic state aid for public schools by $39 million. At the head table, from right, are Beth Scioneaux, deputy state superintendent of education; John White, state superintendent of education; and Tony Davis, a member of the state Board of Elementary and Secondary Education and chairman of the task force. The recommendation goes to BESE, which makes its request to the Legislature this month.

White said that, while he strongly supports more money for teachers, the plan excludes early childhood education and care teachers, who he said are paid an average of $8.95 per hour.

He said that "deep concern" led him to oppose the recommendation even though boosting teacher pay for kindergarten through 12th grade is "the right thing to do."

"I really appreciate Gov. Edwards for putting out the very clear and simple and profound and symbolically important idea of a $1,000 pay raise for every teacher and $500 for every support staff," White said.

While public school teachers are enthused about prospects for a pay raise, they are leery about details of the plan, including how it would be…

The superintendent was the lone "no" vote when an influential, 27-member advisory panel backed the governor's plan, which includes $500 pay raises for support workers and a $39 million hike in basic state aid for public schools.

The recommendation will be sent to the state Board of Elementary and Secondary Education, which will submit its request to the Louisiana Legislature in March.

BESE is expected to mirror the governor's proposal in its request to state lawmakers.

White's stance late in the meeting sparked immediate pushback from other members of the task force, including allies of the governor.

Doris Voitier, one of Edwards' appointees on the state Board of Elementary and Secondary Education, said money for public school children should not be pitted against aid for early childhood education and care.

Senate Education Committee Chairman Dan "Blade" Morrish, R-Jennings and another Edwards ally, said the Legislature can provide dollars for early childhood education outside the formula used to finance public schools and teacher salaries, which is called the Minimum Foundation Program, or MFP.

Morrish said the recommendation of more money for public schools and teachers can be used by child care advocates to boost chances for their cause.

Moments earlier Melanie Bronfin, executive director of the Louisiana Policy Institute for Children urged the panel to "try to find a way to fund this sector," meaning early childhood education.

Bronfin said the Legislature in 2012 ordered sweeping changes in the state's then fractured early childhood education setup without providing money to do so.

Without public funding, families are left to bear the brunt of costs for child care while at work or attending school, she said.

White complained earlier this week in comments to the Press Club of Baton Rouge that the governor's budget excludes new dollars for Louisiana's Child Care Assistance Program, whose ranks have dropped from about 40,000 families to about 15,000.

One of the biggest failings of Gov. John Bel Edwards' budget? Supt. of education says it's this

CCAP assists families with early childhood education while they work or attend school.

He said the state is also facing criticism from federal officials because of the state's low reimbursement rate for families needing child assistance compared to national standards.

The state's waiting list for the program is about 3,300 families, which could rise to nearly 10,000 at the end of the year when two federal grants totaling $36 million expire.

"We are digging ourselves deeper and deeper on the waiting list," White said Thursday to the Minimum Foundation Program Task Force.

Baghian said federal officials, after a market survey, said what Louisiana pays only covers costs in less than 1 in 4 centers, forcing low-income families to come up with the difference.

Earlier the panel rejected a move to recommend pay raises of $3,000 for teachers, which was offered by Keith Courville, executive director of Associated Professional Educators of Louisiana, called A+PEL.

Courville's plan also would have tripled proposed raises for support workers – $1,500 – and the increase in state aid for public schools – to nearly $120 million.

"That's where we can start negotiations," he said.

Officials of both teacher unions, the Louisiana Federation of Teachers and Louisiana Association of Educators, said while they favor raises bigger than $1,000 per year increases of $3,000 are unrealistic. Both organizations have long been aligned with Edwards.

Debbie Meaux, president of the LAE and Cynthia Posey, legislative and political director for the LFT, abstained when Courville's proposal was decided.

Posey said such a push would pit public education against higher education.

The governor's plan was spelled out by Donald Songy, a member of the task force and education policy adviser for Edwards.

The $39 million boost for public schools would be just the second in the past decade.

The governor, who is seeking a second term this year, has said early childhood education and care will be a priority in 2020.

"There are many other needs in the state," Songy said.

The teacher pay raises would also include principals, assistant principals, counselors, therapists, librarians and administrators – over 60,000.

About 100 teachers, parents and others gathered Thursday evening at David Thibodaux STEM Magnet Academy to voice concerns about public education.