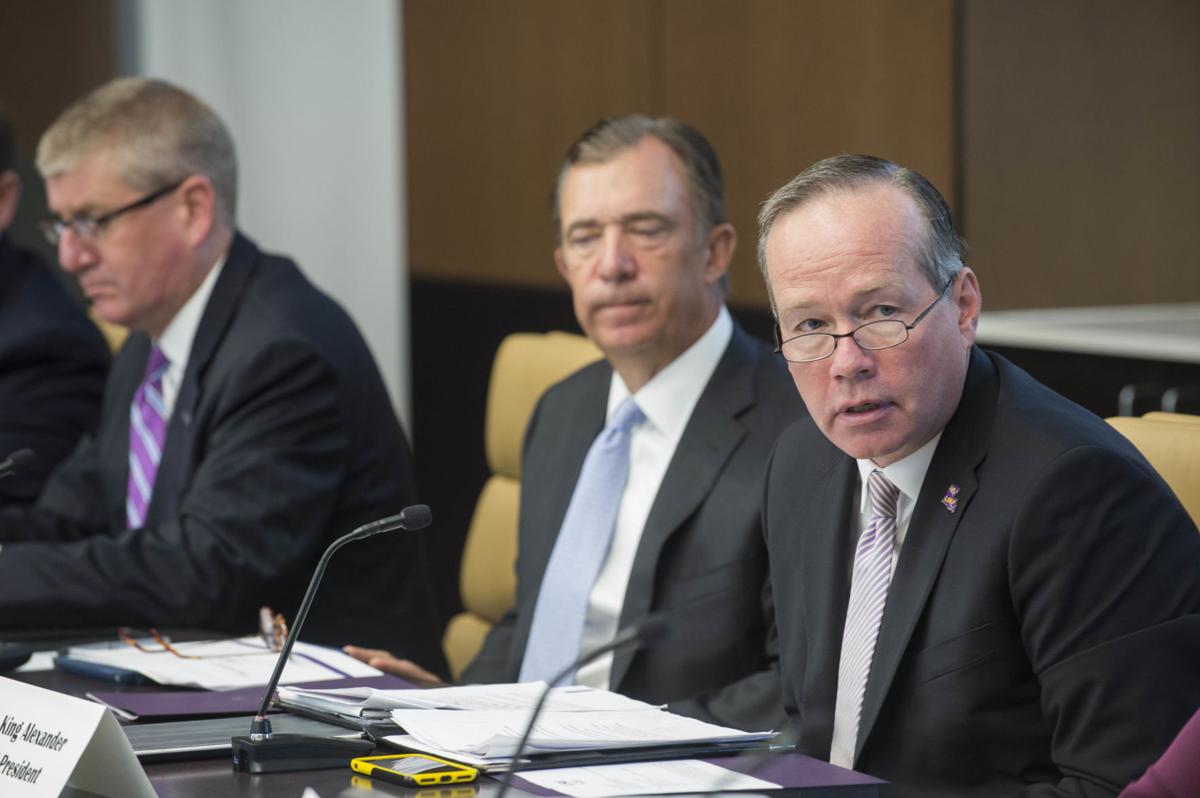 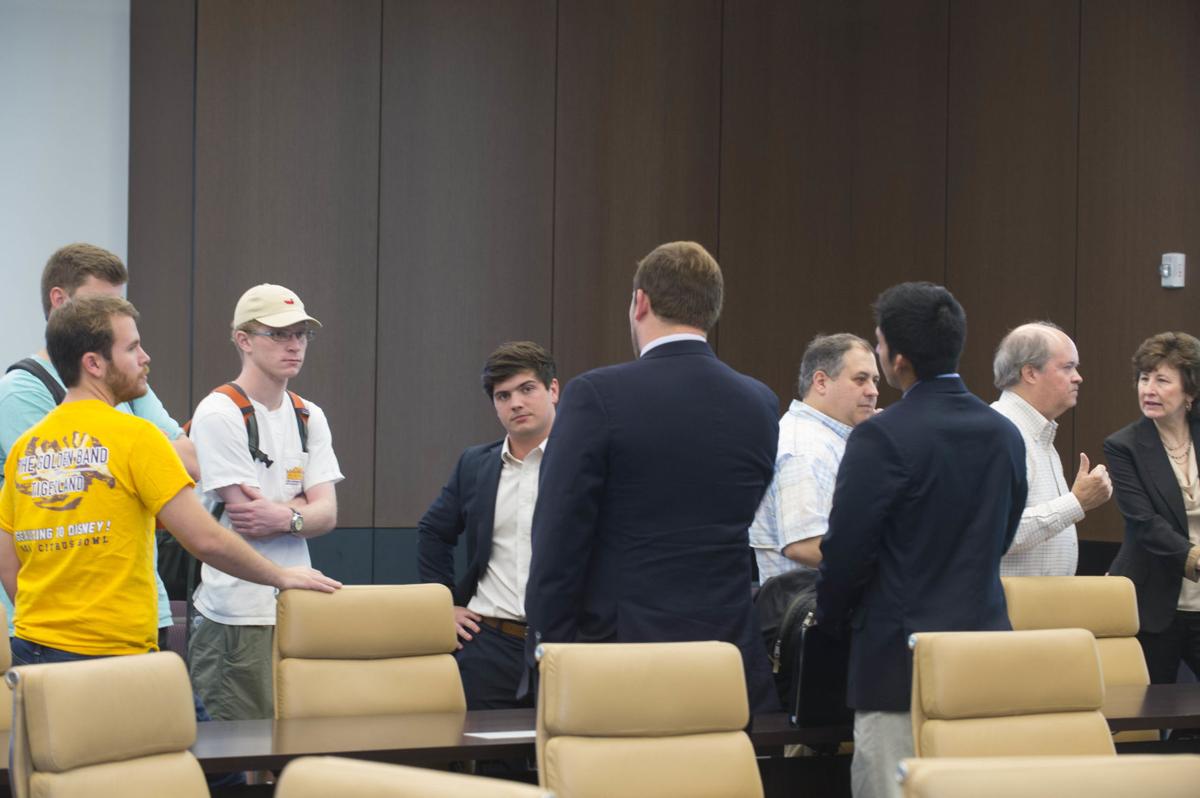 Members of the audience talk, after conclusion of a meeting of LSU's President's Task Force on Greek Life meeting to present recommendations for changes to fraternities, in wake of the death of LSU student and Phi Delta Theta fraternity pledge Maxwell Gruver, 18, who died of alcohol poisoning and aspiratioon after an alleged 2017 hazing incident, Wednesday, Feb. 21, 2018 at the LSU Foundation Building. 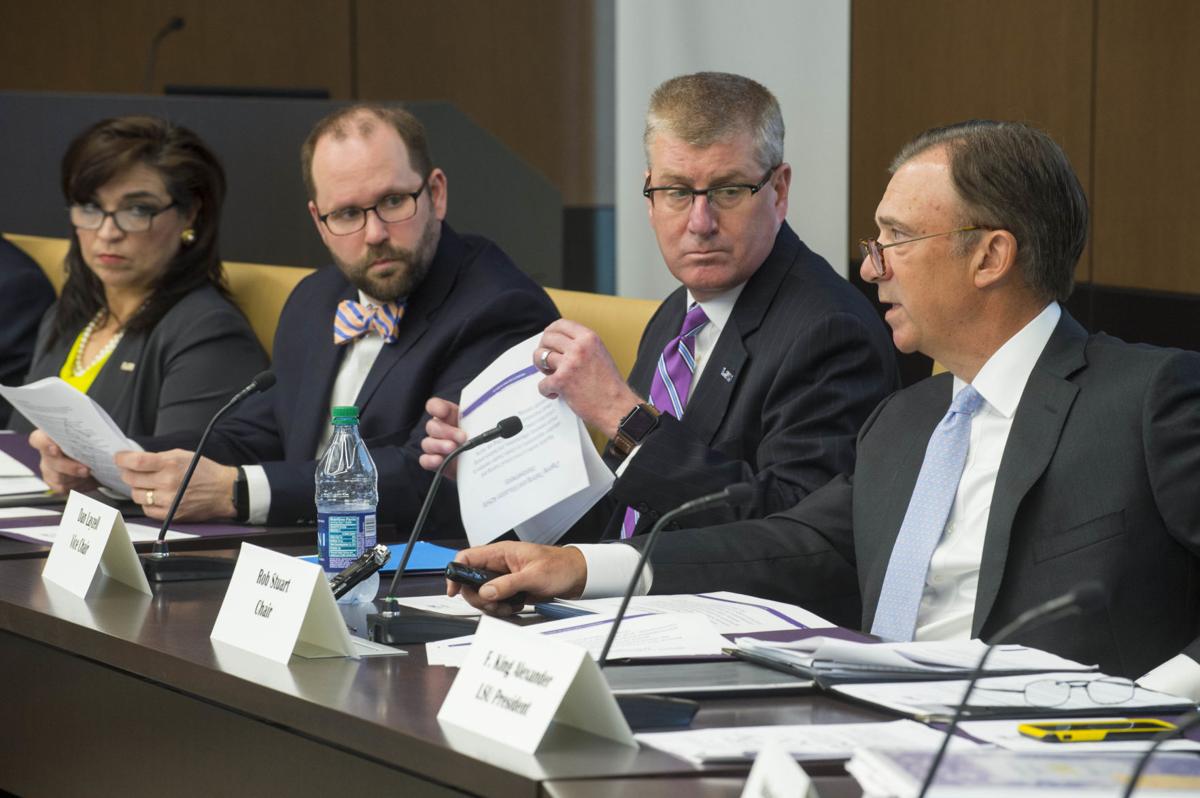 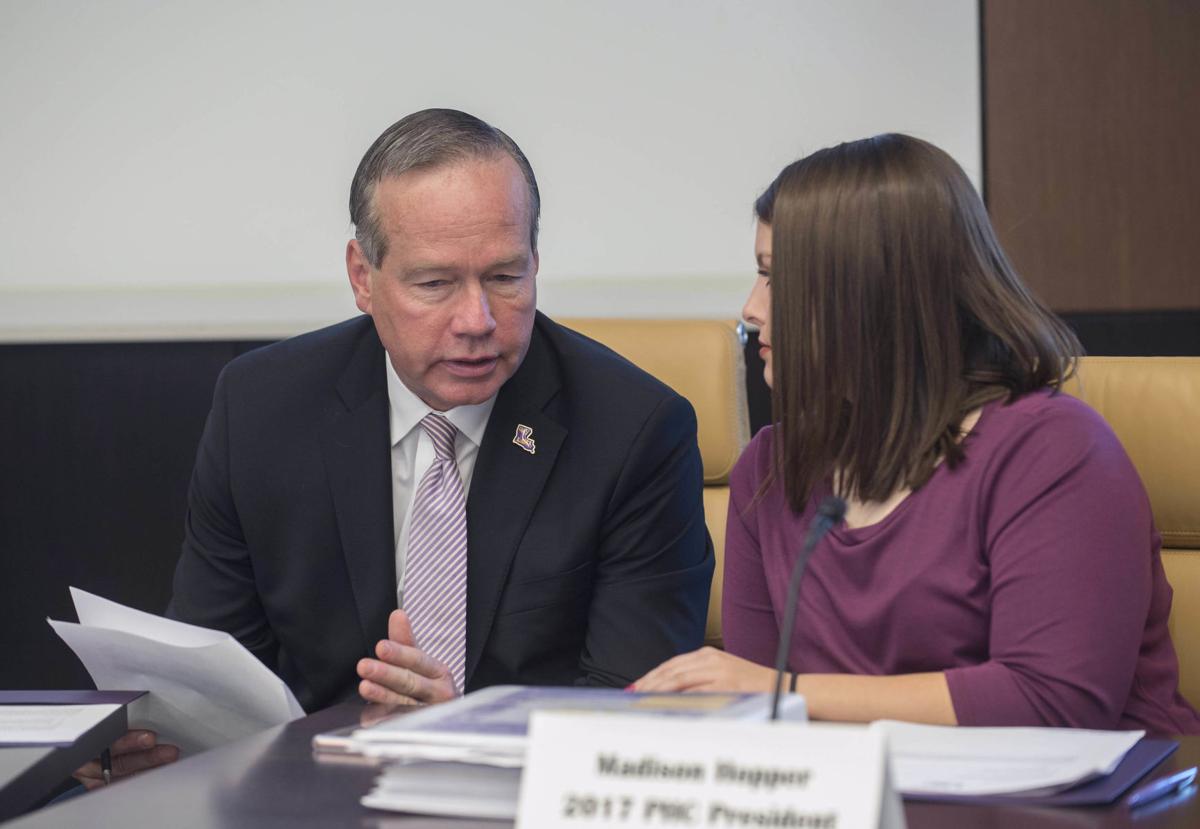 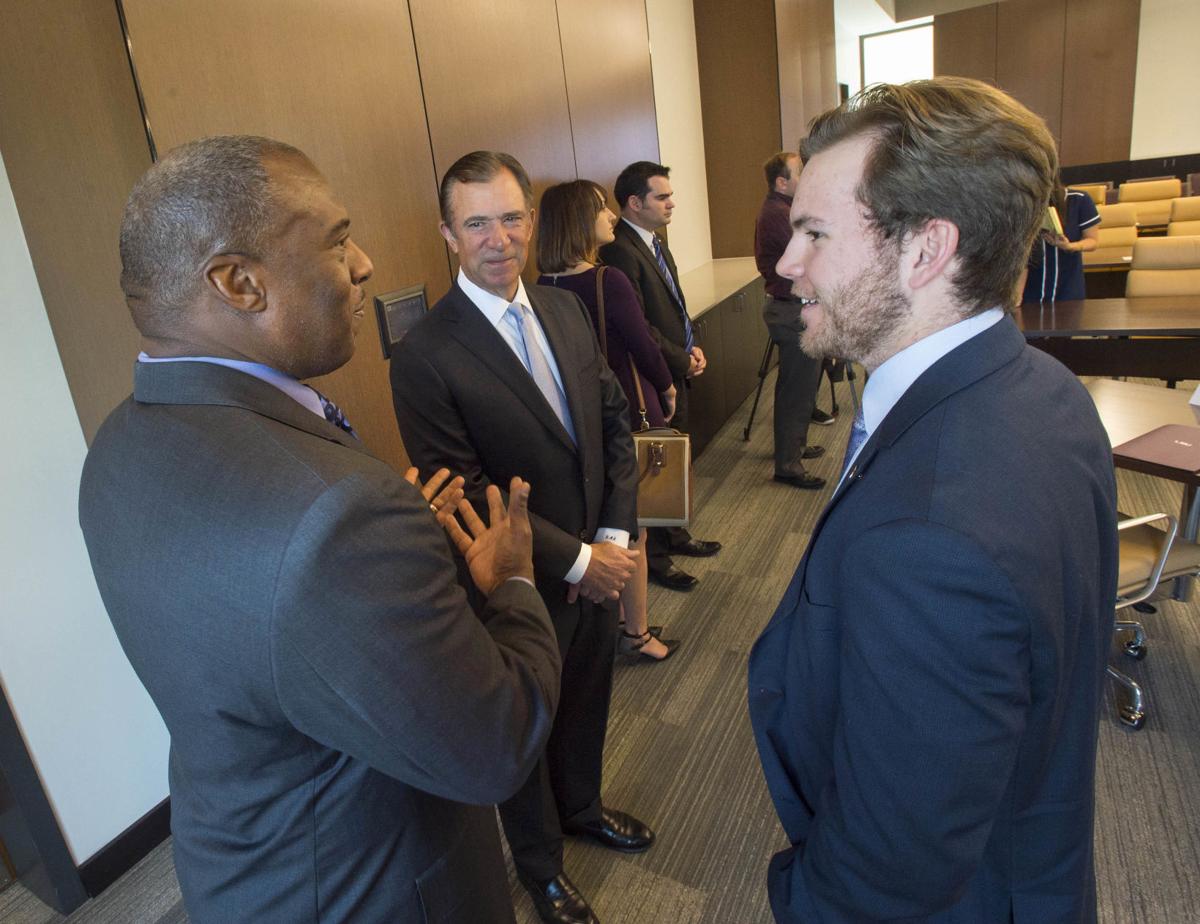 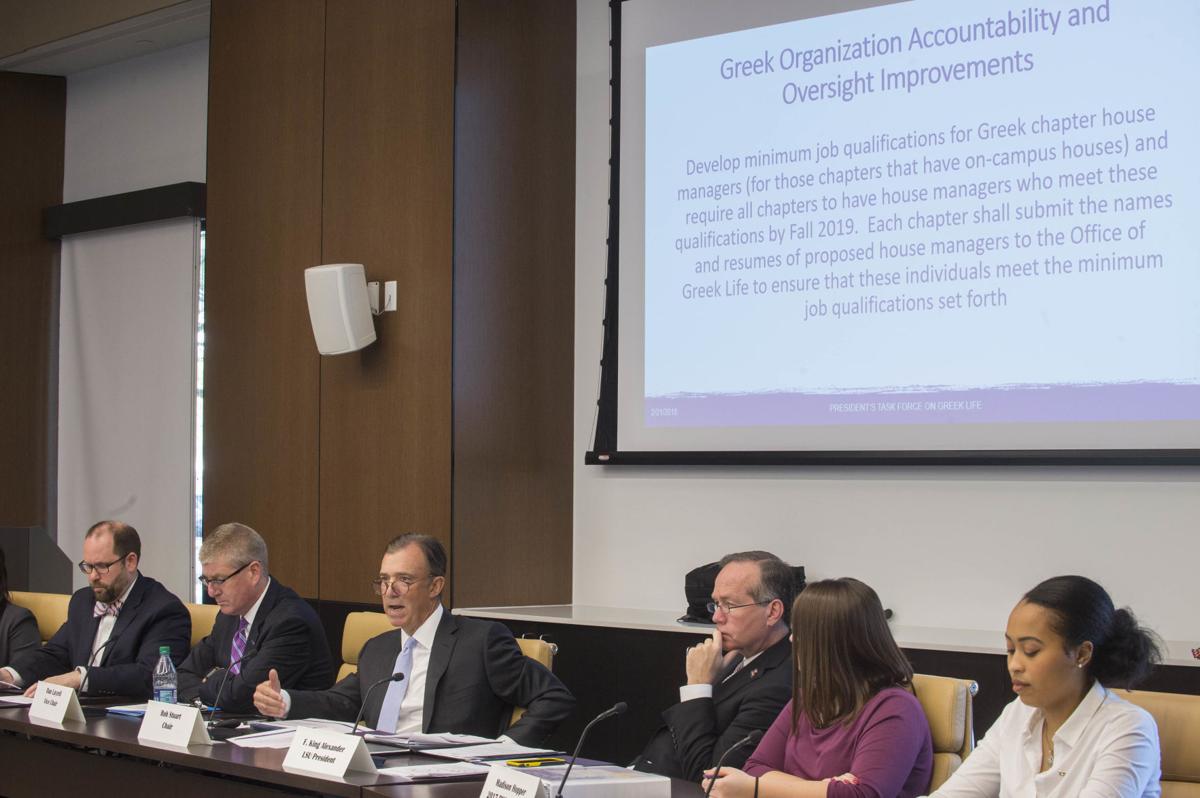 Members of the audience talk, after conclusion of a meeting of LSU's President's Task Force on Greek Life meeting to present recommendations for changes to fraternities, in wake of the death of LSU student and Phi Delta Theta fraternity pledge Maxwell Gruver, 18, who died of alcohol poisoning and aspiratioon after an alleged 2017 hazing incident, Wednesday, Feb. 21, 2018 at the LSU Foundation Building.

Responding to the death of a fraternity pledge last fall, LSU unveiled its highly anticipated corrective action plan on Wednesday — a list of 28 proposed changes that officials say are meant to tamp down on binge drinking and stop hazing as fraternities and sororities recruit new members.

The plan calls for banning hard alcohol at fraternity parties, requiring supervision at pledge activities, engaging with alumni to create more chapter oversight, and creating a transparency website where disciplinary sanctions for Greek organizations are publicized.

But the parents of Max Gruver, the LSU student whose death prompted the look at Greek Life on campus, said LSU’s proposal is an empty gesture.

“The report epitomizes what happens when task forces like these are comprised of members with vested interests in perpetuating the current, failed Greek Life system,” Rae Ann and Stephen Gruver said in a statement. “The end result here is a report consisting of a lot of words aimed at crafting only the appearance of reform. In reality, it proffers no real meaningful changes to Greek Life that would have prevented the death of our son, any other injuries, or sexual assaults that have plagued LSU’s fraternities.”

In September, Gruver, an 18-year-old freshman from Roswell, Georgia, died in what police called a hazing incident while he was pledging Phi Delta Theta. His blood alcohol level registered at 0.495 after a heavy night of drinking. Police said he was playing an initiation game called “Bible study” where he was forced to chug alcohol every time he answered questions incorrectly about his fraternity’s history.

In Louisiana, the maximum criminal penalty for hazing is softer than the penalty for shoplifting candy. A hazing conviction comes with a small…

His parents have since sprung into action. They started a foundation to educate students about the dangers of hazing and binge drinking, and have started calling for new laws and higher education policies.

The LSU Task Force created by President F. King Alexander met for about five months to discuss policy changes. In January, the Gruvers told The Advocate they’d never been contacted for input or updates, despite wanting to be a part of the process. Soon after, LSU officials reached out to include the family.

On Wednesday, Rae Ann and Stephen Gruver said they were most disappointed about the task force’s recommendations to delegate oversight to alumni and volunteers. For example, a major component of the recommendations includes creating “advisory boards” of community and alumni members. Advisory board members would be responsible for supervising all pledge activities.

“By recommending the management of LSU fraternities be left to students, volunteers, and unpaid alumni, the report makes it clear the Task Force decided to bend to the concerns and traditions of national fraternities at the expense of student safety,” the Gruvers said. “Our family remains hopeful President Alexander will see these proposed ‘reforms’ for what they are. We hope he will look to others, including our family, for genuine recommendations on changes with real potential to eliminate hazing and other dangerous fraternity conduct at LSU.”

Rae Ann Gruver said that she was pleased with the university’s commitment to pursue a student amnesty policy in the cases of medical emergencies, which would encourage students to call for help without fear of repercussions. She also was happy with the school’s promise to build a transparency website where parents and students can see truthful information about fraternities’ disciplinary records.

“But there is clearly a lot more that needs to happen,” she said.

In a response, Ernie Ballard, a spokesman for LSU, said the conversation will continue as Alexander reviews the group's report.

“President Alexander received the task force report today, and as he reviews the recommendations, he hopes to continue to dialogue with the Gruver family,” Ballard said. “We are all working toward the same goal of improving the safety in our Greek system.”

The pushback from the Gruver family may come as a shock to members of the LSU Task Force who touted the recommendations as a win for LSU’s community.

Phi Delta Theta had cameras in LSU fraternity house, but none working when Max Gruver died

LSU's now-defunct Phi Delta Theta house had security cameras placed inside and outside of the house, but they were not working the night Maxwe…

Earlier in the day, Alexander said the wide ranging recommendations were being eyed by other university presidents in the Southeastern conference and across the nation who are grappling with the same issues. Last year, there were at least four students who died in fraternity-related deaths, including Gruver.

“We hope this will reshape the way fraternity life goes on in the future as well as all Greek life,” Alexander said. “We want it to be safe. We’ve said from day one we wanted a safer environment and a better environment.”

Part of the recommendations include cleaning up LSU’s existing protocols. The plan calls for the university to more clearly define what hazing is. For example, if a fraternity forces students to wear dress shirts and ties to the football games, as they’ve been known to do, is that hazing or tradition? And the university would also more clearly detail what disciplinary actions can result from specific violations, such as breaking rules about alcohol and drugs or sexual misconduct.

Other recommendations add more layers of supervision and outside oversight into the Greek system, such as the advisory boards.

In addition, chapters would have to hire a house manager, sometimes called house mothers, although they don’t have to be women.

And finally, there’s regulations that are aimed specifically at limiting heavy drinking and curtailing raucous partying. When students go through the pledging process, alcohol would be banned at all new member events where hazing is most likely to occur.

Kegs would be banned entirely under the plan, while the number of guests at fraternity and sorority parties would also be capped.

The proposal would also ban hard alcohol and all common source alcohol from chapter events. And, more ambitiously, this hard alcohol ban could also extend to when the Greek organizations hold official events at bars.

That means that if a fraternity and sorority have a scheduled mixer at a local bar, often referred to as “exchanges,” the students won’t be allowed to order their vodka with cranberry juice or rum and Cokes. They'd have to stick to beer, and police the policy themselves.

“We’ll see how that looks in practice, but I think it can be followed,” said Student Government President Jason Badeaux, a member of a fraternity who also sat on the task force. “I think that the chapter leaders know that something has to happen. There will be some things that we don’t like but this is where we are.”

Badeaux said he thinks LSU’s Greek community will embrace the changes because they were included in the process.

“You can’t regulate this problem away,” he said. “Authorship is ownership.”

Rob Stuart, an LSU alumnus and businessman who led the task force, said the panel wanted to be meaningful without being draconian.

“We were concerned about the unintended consequences of our actions,” Stuart said. “We didn’t want to go so strict that we just drive all of the behavior underground.”

Earlier in the process, the task force considered mandatory drug testing for fraternity members, but ultimately that recommendation got cut from the final report. Stuart said the task force decided that it was a bridge too far.

Another major culture change for fraternities would target their LSU football game tailgates. For years, Greek organizations have set up tailgates in the university's Parade Ground. Several reported hazing infractions have centered around fraternity brothers forcing new members to stay up all night, camping on the lawn to reserve their spots.

The Parade Ground has also been the scene of violent fights and students passing out from drinking in recent years.

Under the plan, starting with the 2018 football season, fraternity tailgates would be relegated to their fraternity houses.

After Gruver died, 10 men were arrested for their involvement in the night, books on counts of misdemeanor hazing. One of them, Matthew Naquin, had the additional felony charge of negligent homicide. Defense attorneys have defended their clients, saying they didn't haze Gruver.

East Baton Rouge District Attorney Hillar Moore III is in the process of presenting evidence about the case to a grand jury to determine whether he'll prosecute. He said he expects the final decision on charges will come in March.

Penalties covering residential chickens are harsher than hazing laws, Stephen Gruver said, calling for stiffer penalties in an appearance on "…