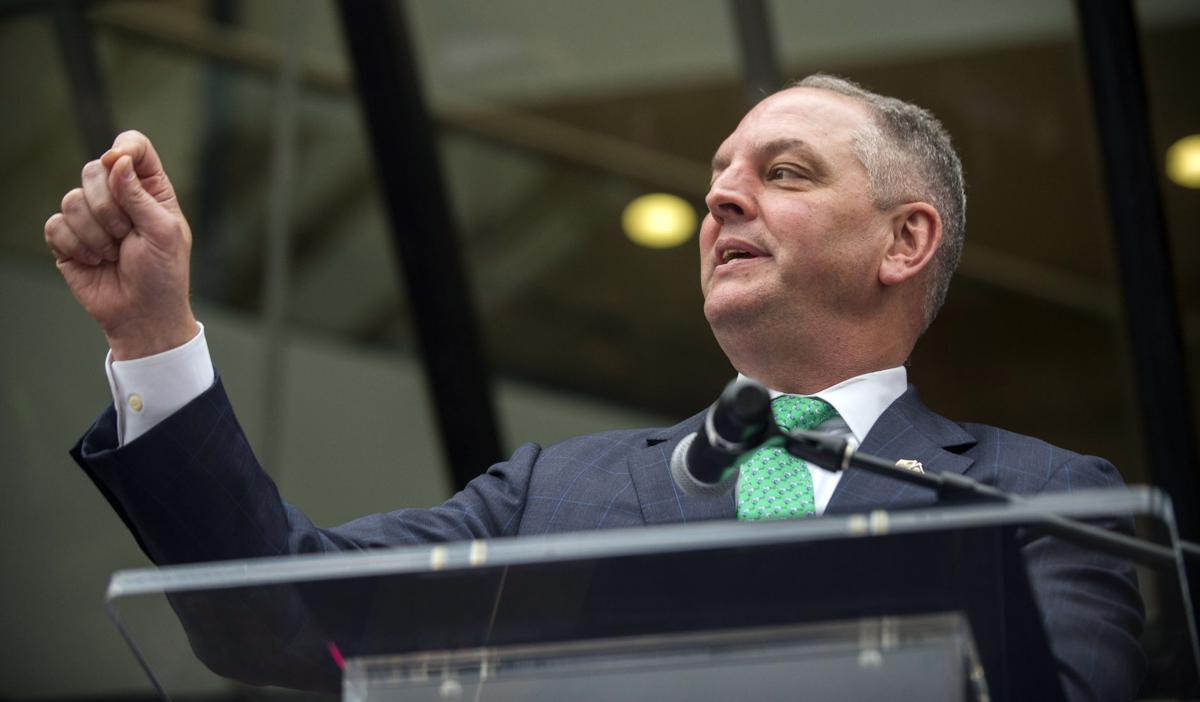 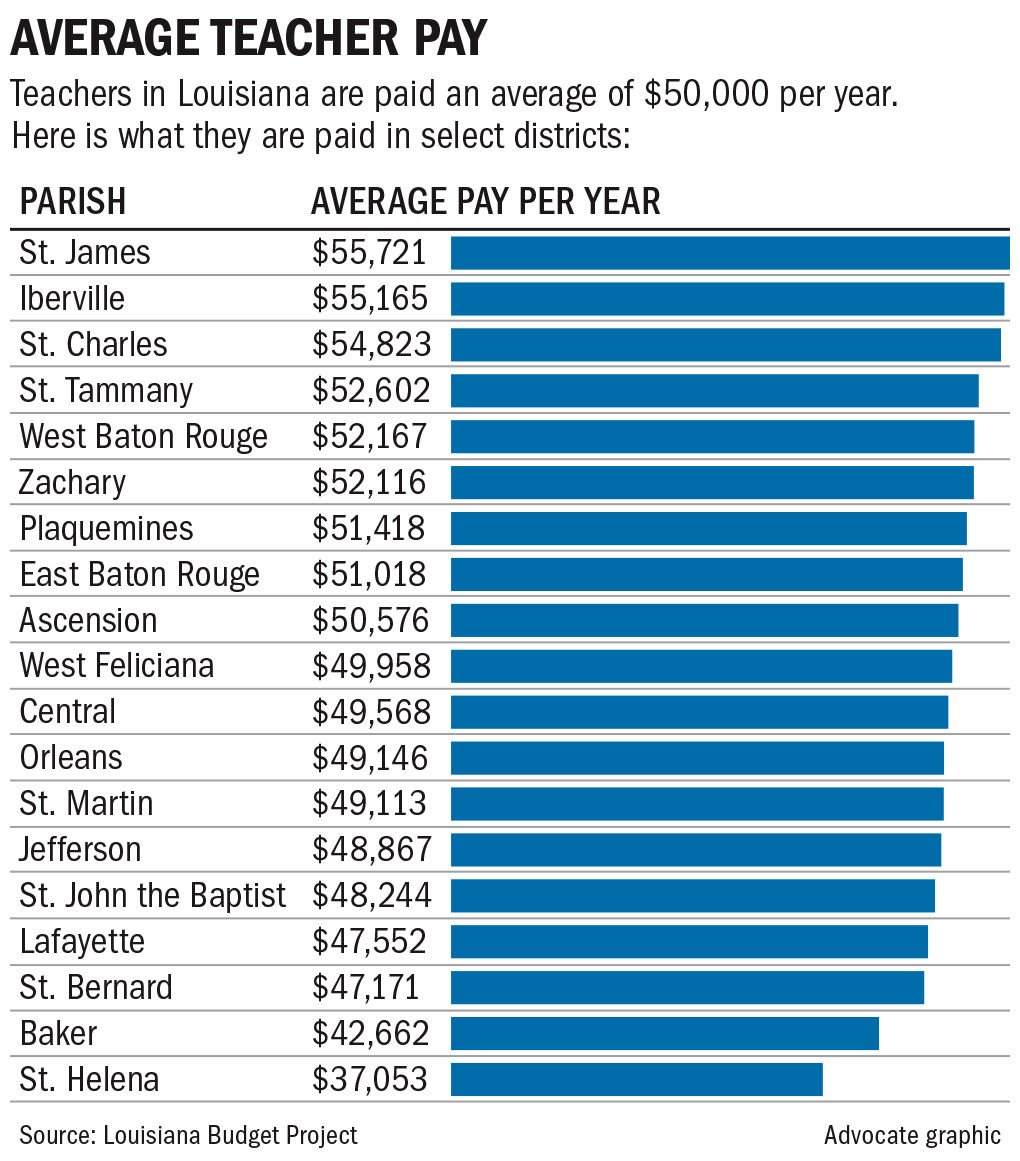 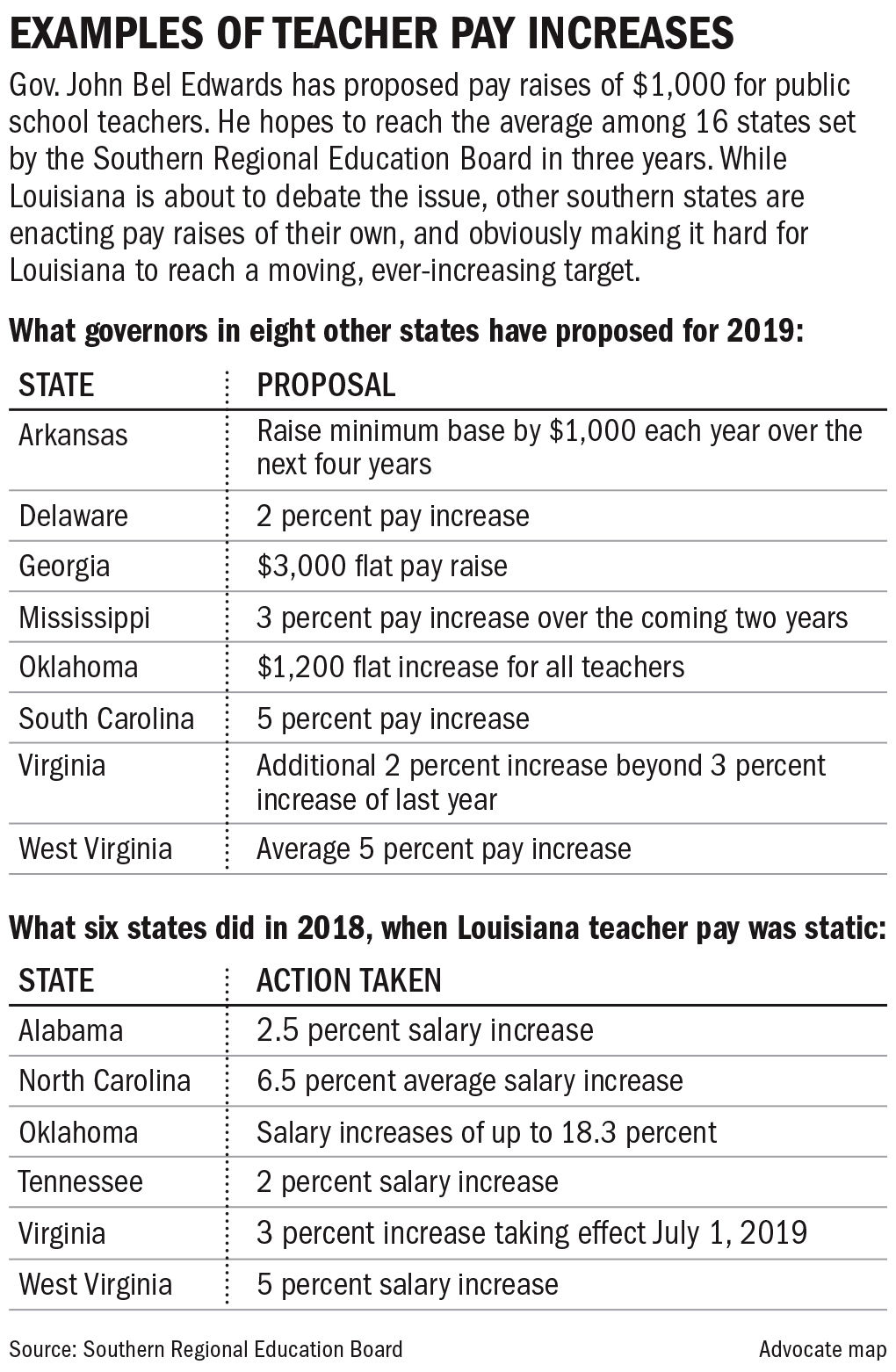 Gov. John Bel Edwards' plan to boost teacher pay to the regional average is facing headwinds before the legislative debate even begins on April 8.

Governors in at least eight other states that Louisiana is compared to — half of the total — have proposed raising pay for their own teachers this year, according to the Southern Regional Education Board, which sets the average.

Teachers in Louisiana last got pay raises that averaged $580 in 2013, and a $2,376 increase in 2007 when the state finally reached the regional average.

The governor and others contend the regional gap has widened since then, perhaps to $2,200 or so.

Edwards has proposed pay raises of $1,000 this year, part of a three-year plan aimed at reaching the Southern average.

However, similar and more generous proposals in rival states are sure to complicate the push.

"It is kind of a moving target, so it is going to take serious investment," said Debbie Meaux, president of the Louisiana Association of Educators and an Edwards ally.

Texas and other states in the region are also expected to debate teacher pay raises. How many will win final approval remains to be seen, which means the 2019 gap will not be known for months.

The size of the raise in Louisiana is just part of the debate.

Will Louisiana teachers walk out sometime this year? It depends on this factor, leader says

Whether public school teachers walk off the job in the current school year depends on actions by Democratic Gov. John Bel Edwards and the Repu…

Sen. Conrad Appel, R-Metairie, a member of the Senate Education Committee who was its chairman for four years, said local school districts should help finance any pay boost.

"It is not necessarily just a state incentive," Appel said. "And No. 2, there needs to be something linking teacher pay increases to success in the classroom."

Others have suggested targeting high-demand teachers — like those who specialize in math, science or special education — for higher salaries.

While public school teachers are enthused about prospects for a pay raise, they are leery about details of the plan, including how it would be…

In a report last week, the Louisiana Budget Project said that, rather than across-the-board hikes, the raises should target huge disparities in pay across the state.

The review said teachers in 45 of the state's 69 school districts were paid less than the state average, according to policy analyst Neva Butkus, who did the report.

But reaching the SREB average is expected to be the mantra in 2019, just as it was before the state did so 12 years ago.

Edwards' office downplayed concerns about action in other states.

"The governor has been clear all along that his plan is the first step in a multi-year process to get teacher pay up to the SREB average," Shauna Sanford, the communications director, said in a statement.

"If anything this makes an even stronger case for why we can no longer wait to implement these much-deserved and long-overdue raises for teachers and support personnel," Sanford said of pay raise debates elsewhere.

While public school teachers may get their first substantive pay hike in six years, low salaries are not a glaring issue for new teachers.

The governor, who has long enjoyed the support of the LAE and the Louisiana Federation of Teachers, has failed to deliver on most of his key public school proposals for the past three years.

"First and foremost, it is an election year, so you can't ignore this factor in considering the timing of this request by the governor," said Joshua Stockley, associate professor of political science at the University of Louisiana at Monroe.

However, he also said the governor, whose wife, Donna, is a music education teacher, knows the plight of educators more than other statewide officeholders.

Stockley said the pay gap points to a larger issue.

"Louisiana has persistently struggled with staying at average," he said.

"We work so hard to get to the average and then, either by forces beyond our control or forces within our control, we find ourselves lagging again," Stockley said.

"There was a time when higher education statistics indicated that we were in the regional average under Gov. Kathleen Blanco," he said. "And we are only two governors removed and we find ourselves near the bottom."

The 2019 legislative session will be the first of Edwards' term where the state budget is not in crisis mode.

Meaux, whose group favors increases of at least $1,200 this year, said Louisiana has to aim for exceeding the SREB average to stay there.

"We are lagging behind by a large percentage, and it is going to take an all-at-one-time and over many times of that investment," she said.

Shane Riddle, legislative and political director for the LAE, said that aside from concerns on exactly how raises should be funded, "we just need to make sure that we are trying to solve some of the problem quickly."

Appel, despite questions about the details of any increases, thinks one will pass. "Clearly, we need a pay raise," he said.

Larry Carter, president of the Louisiana Federation of Teachers, said Louisiana needs to find a way to both reach the SREB average and sustain it.

"What we are hoping for is that people in our Legislature are paying attention to the progress that other states are making regarding investments in education funding," Carter said.