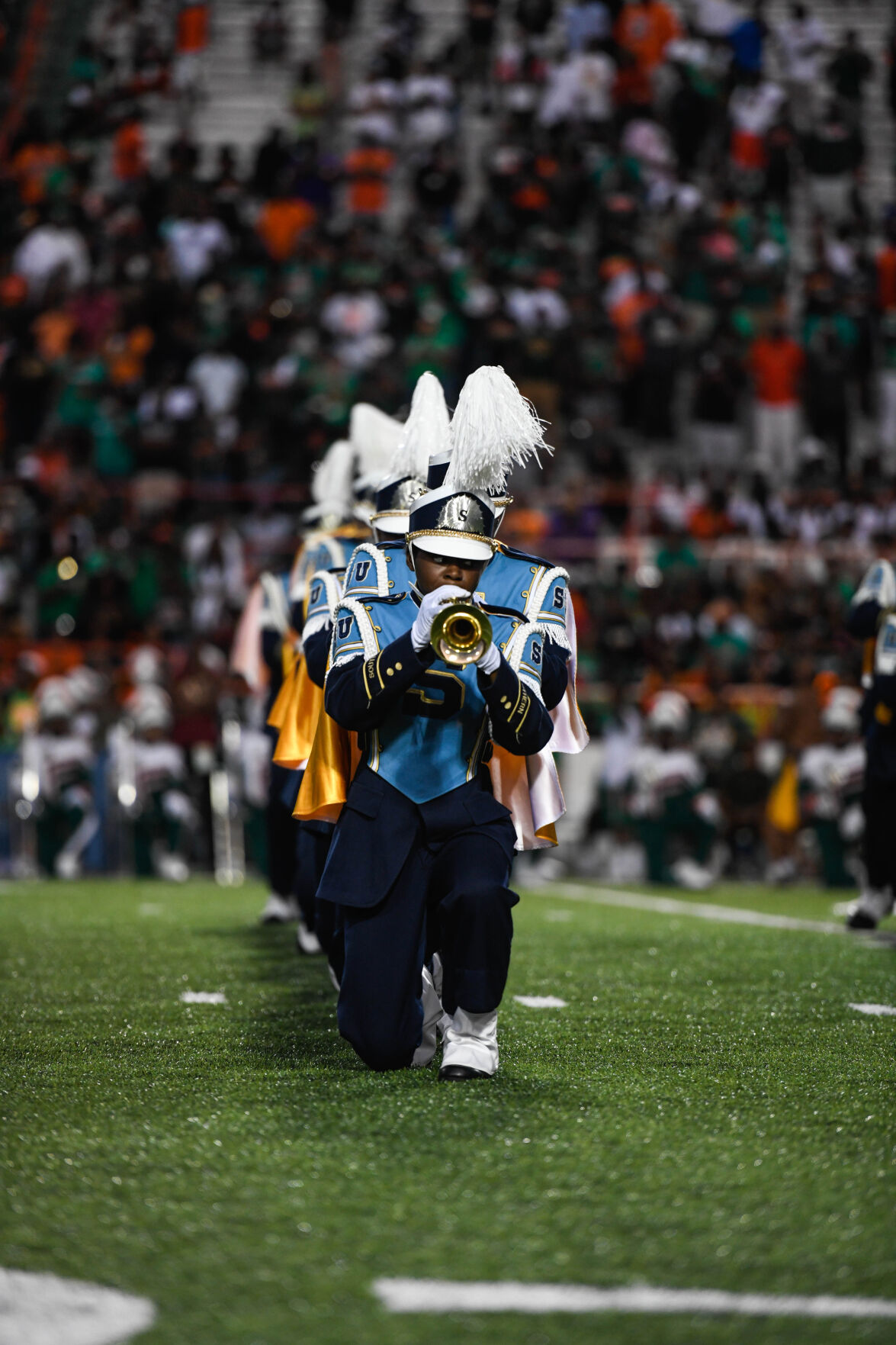 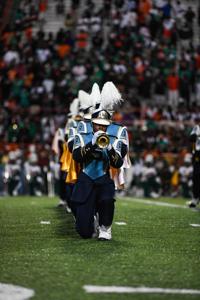 The Human Jukebox marching band performs during half time as Southern University plays against FAMU at Bragg Stadium in Tallahassee, Fla. on, Saturday, Aug. 21, 2019. FAMU won against Southern 27-21. (Aileen Perilla for The Advocate) ORG XMIT: 10030138A 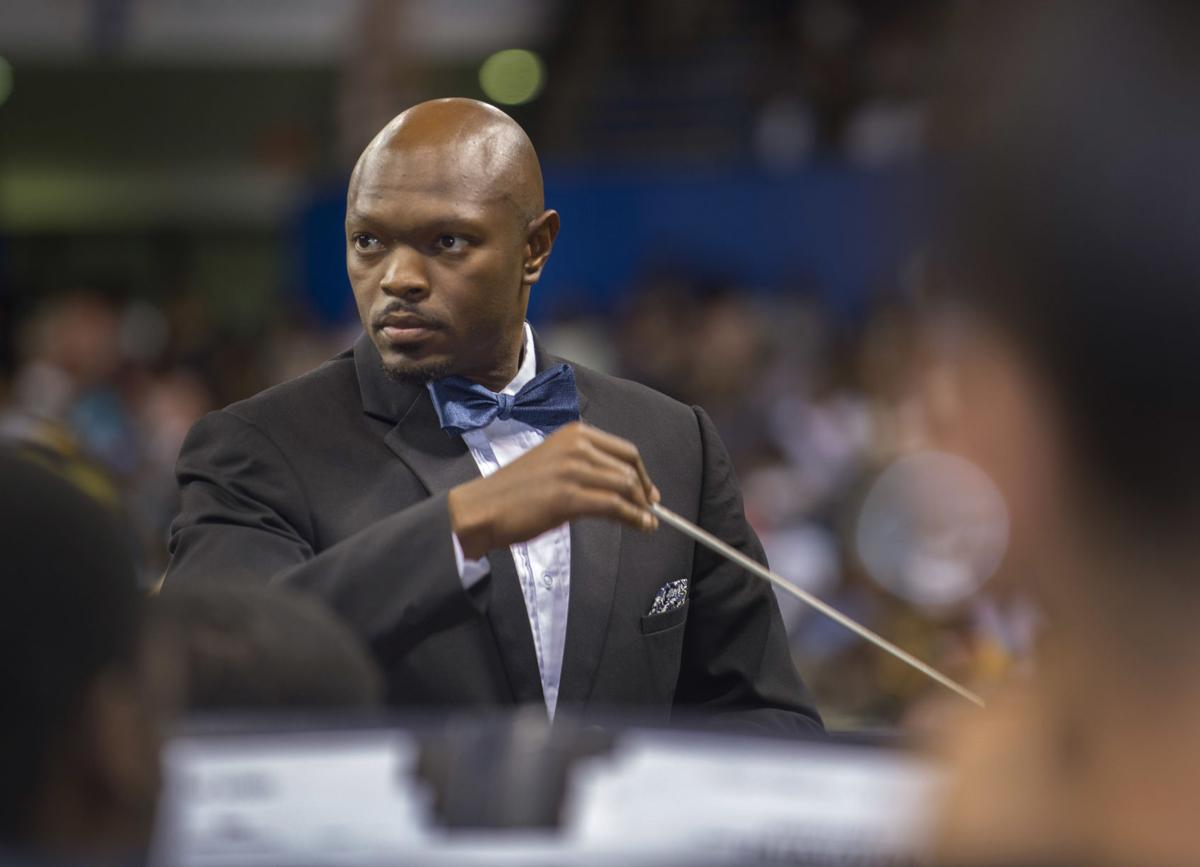 The Human Jukebox marching band performs during half time as Southern University plays against FAMU at Bragg Stadium in Tallahassee, Fla. on, Saturday, Aug. 21, 2019. FAMU won against Southern 27-21. (Aileen Perilla for The Advocate) ORG XMIT: 10030138A

The Southern University Human Jukebox has been a staple in Baton Rouge since its inception in 1947. But, for the first time since then, the marching band is silent on the football field after the Southwestern Athletic Conference canceled the 2020 season because of the coronavirus pandemic.

“Since I’ve been in the band program, we’ve never had anything to this extent," said Southern director of bands Kedric Taylor. "Football has never, since I’ve been alive, been shut down. We had hurricanes and tornadoes to where it gets postponed for two weeks or so and we shake back and start practicing and everything is back to normal."

The audition process for new members was completely overhauled and moved virtual. Practices now include masks for both the Human Jukebox and Dancing Dolls, and are split into groups.

Taylor said this is by far the strangest year he has been part of during his time at the university and the program — which started when he was a student — from the social distancing to wearing masks around campus.

But it has also been a year that provided the opportunity for so much change and growth within the program, he said.

“We’ve just been trying to enhance our skills and knowledge of what we do and how we do it and finding better way to do it," Taylor said. "We’re trying to be innovative and creative while we have time to think and plan properly for the things that we do know we’re going to be a part of.”

Since 1947, the Human Jukebox has performed at almost every Southern football game. Since 1969, they have been joined by the Fabulous Dancing Dolls.

Outside of those football games themselves, the Jukebox and Dancing Dolls have also performed at six Super Bowls, four Sugar Bowls, three U.S. presidential inaugurations, the Rose Bowl Parade, the Special Olympics and Radio City Music Hall more than 100 times.

Before the coronavirus pandemic, the Human Jukebox was riding a wave of momentum. The Human Jukebox and the Fabulous Dancing Dolls were featured in Lizzo’s “Good as Hell” music video in 2019, which they hoped would carry them into the new year.

Because of the recognition of the Human Jukebox, opportunities still continued to come.

Most recently, the Human Jukebox, along with other HBCU bands, were featured in a music video for 2 Chainz and Lil Wayne’s music video “Money Maker.”

Taylor explained that the video was supposed to be shot in Baton Rouge before the pandemic grew out of control, causing it to be shot in Miami.

Instead, the music video included shots of the HBCU bands playing from past seasons and, in Southern's case, at Mardi Gras parades.

“It’s definitely a privilege to be noticed by these artists (Lizzo and 2 Chainz)," Taylor said. "They have a huge impact on our students and different ones who make up the student body. That plays a huge role for us.”

Taylor said the Human Jukebox had various opportunities lined up for 2020, including being able to perform with Lizzo at the 2020 Essence Music Festival.

Taylor believes that if there was not a pandemic, the Human Jukebox and Dancing Dolls would be riding that momentum high.

“It may have caused us to miss out on some opportunities. We have something coming up that will be pretty big," he said. "We’re still making moves, but we’re having to find a different way to approach it and go about doing it."

One thing they are excited about working on is a voting campaign for the districts surrounding Southern University. Taylor said he is excited to use the Jukebox's platform to encourage people to vote in local and national elections.

Most of all, everybody within the Jukebox and Dancing Dolls is working to continuing to bring people unique music and new vibes to everything that they do.

“It’s going to work out for us in the end, but we’re definitely looking forward to starting back in the spring," Taylor said.

2 Chainz might be from Atlanta, but his latest single has a heavy dose of south Louisiana — specifically Baton Rouge — to it.