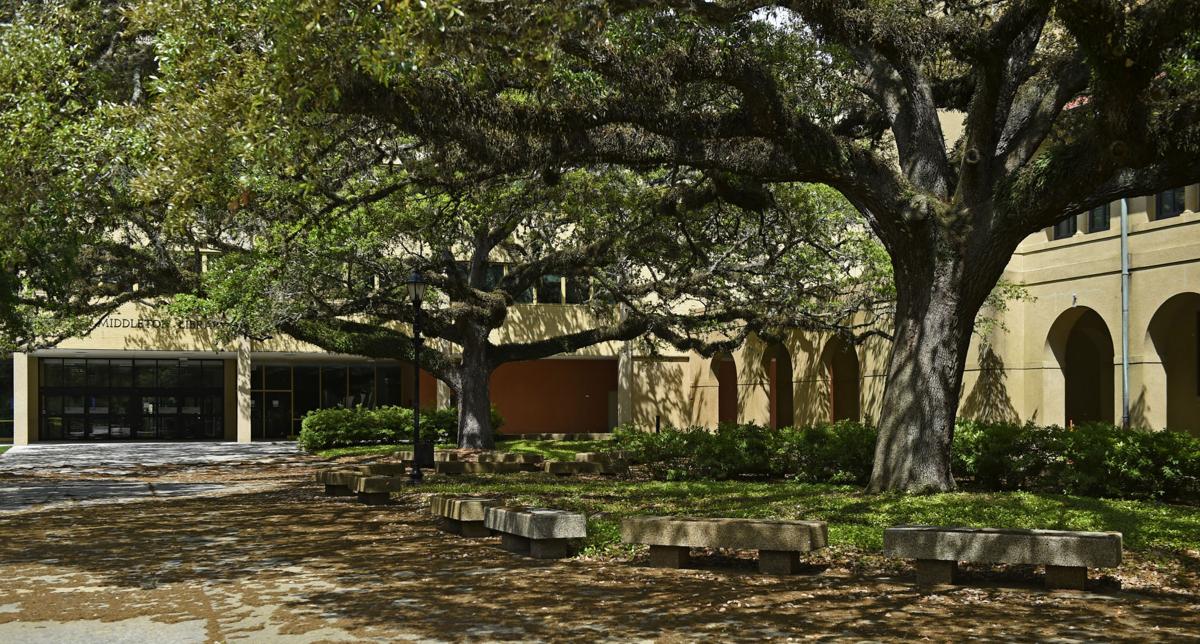 Pollen covers the typically heavily traveled walkway and benches near LSU's Middleton Library in the Quad on the first full day of Governor John Bel Edwards' Stay at Home order to combat the spread of coronavirus, Tuesday, March 24, 2020, in Baton Rouge, La. 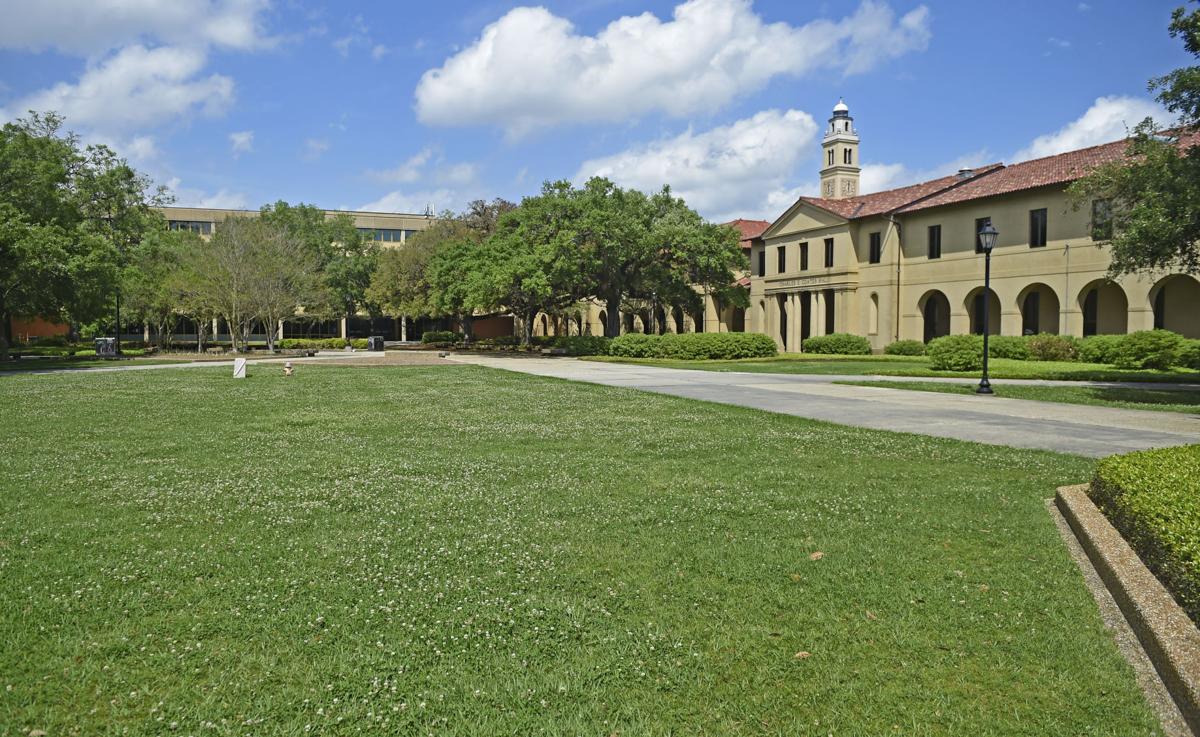 The sun shines down on an empty quad at LSU on the first full day of Governor John Bel Edwards' Stay at Home order to combat the spread of coronavirus, Tuesday, March 24, 2020, in Baton Rouge, La.

Pollen covers the typically heavily traveled walkway and benches near LSU's Middleton Library in the Quad on the first full day of Governor John Bel Edwards' Stay at Home order to combat the spread of coronavirus, Tuesday, March 24, 2020, in Baton Rouge, La.

The sun shines down on an empty quad at LSU on the first full day of Governor John Bel Edwards' Stay at Home order to combat the spread of coronavirus, Tuesday, March 24, 2020, in Baton Rouge, La.

LSU's Associate Dean of Students Jonathan Sanders is back at work after an internal investigation found he complied with policy and procedure his office uses in probing complaints of student sexual misconduct and similar violations.

Sanders came under fire for the way he handled those investigations after several students complained he seemed to prefer light punishments for offenders in Title IX cases, while some said they felt pressured to accept "deferred suspensions" for perpetrators. 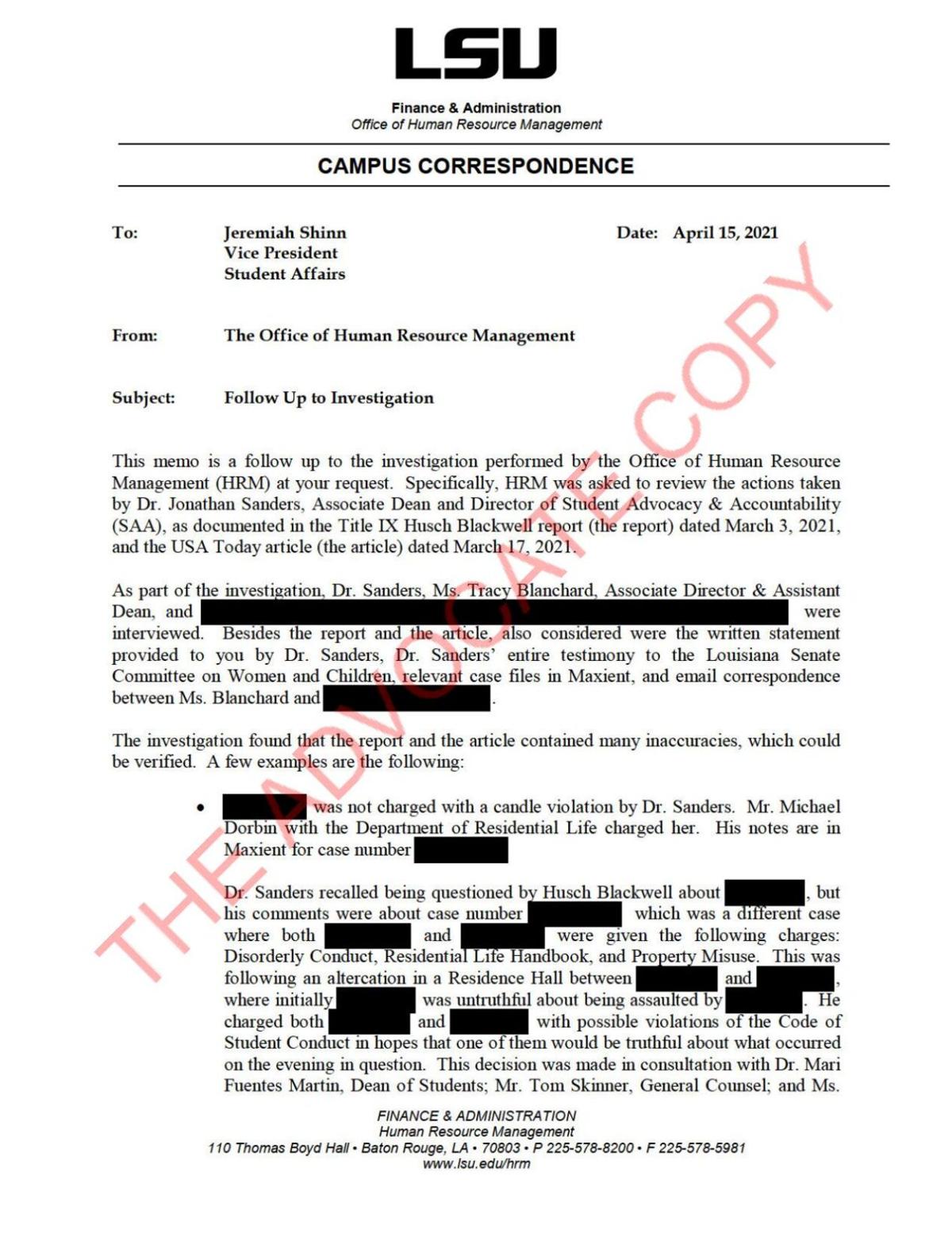 But LSU commissioned its own HR probe into Sanders this month. And a memo from LSU's HR division about the Sanders probe — which his attorney released Thursday to The Advocate | The Times-Picayune — rebuts many of the allegations that have recently surfaced against him. Since he's returned to work, Sanders has retained his job title as associate dean of students, though he is no longer involved in handling sexual assault or Title IX cases. LSU's Student Advocacy and Accountability Office has not been the final arbiter in those cases since August of last year, when changes to Title IX took effect under then-President Donald Trump.

Sanders had been temporarily reassigned to a special projects role within the Student Advocacy and Accountability Office during the HR review.

The HR memo, dated April 15, walks through nine allegations against Sanders, most of which stemmed from a USA Today piece that accused him of taking a lenient approach to doling out punishments for students found responsible for rape, stalking and abuse.

How an LSU board proposal has prompted new fury from F. King Alexander, past LSU officials

Former LSU President F. King Alexander, former Athletic Director Joe Alleva and a group of past and present members of LSU's Board of Supervis…

USA Today reported that out of 46 students found responsible for Title IX offenses, LSU expelled just one during Sanders' four-year tenure overseeing those cases. But the memo says Sanders provided records to LSU's HR department showing that 18 students have been expelled under his purview, though it's unclear if any of them had Title IX violations or if they were ousted for other reasons.

While Husch Blackwell raised questions about whether Sanders had given appropriate sanctions, the memo says he "provided evidence to show that the discipline he issued was appropriate given the parameters" of the school's guidelines. The law firm, however, also raised concerns about the guide itself, and whether it even suggested the right punishments for students found responsible for misconduct.

"As a result of this investigation, it's quite clear that whatever Husch Blackwell had to say about Mr. Sanders is false," said Mary Olive Pierson, the high-powered Baton Rouge attorney representing Sanders. "That report is full of misrepresentations and inaccuracies and I, quite frankly, don't understand why LSU has chosen not to defend its own employees."

LSU also announced Thursday that it started to tweak internal policies on sexual misconduct while state lawmakers advance bills to tighten reporting requirements. The university has added a line to their sexual misconduct policy saying "any employee who is required to report instances of power-based trauma and fails to promptly make the report without good cause or, with the intent to harm or deceive, knowingly makes a report that is false, shall be terminated."

The policy, however, will require further changes because it does not specify which employees are required to report. It also seems to contradict itself by saying "LSU strongly urges prompt reporting" of sexual misconduct rather than requiring it.

As LSU continues to probe how campus officials have handled allegations of sexual misconduct, Associate Dean of Students Jonathan Sanders has …

LSU spokesman Ernie Ballard said Thursday the university considers all employees mandatory reporters unless they're designated a "confidential adviser" — a small group of people who work as counselors or in similar roles. The current policy does not explain that.

"This was the initial change to add the termination information, but they will be further revamped to clarify the policies to the language being presented in the bills by the legislature," Ballard said. "Once those bills are final, our policies will reflect those changes."

State Rep. Aimee Freeman, D-New Orleans, is carrying a bill this session that would add teeth to reporting requirements and force institutions to fire employees who fail to report misconduct. Freeman's bill received a unanimous "yes" vote in the state House of Representatives Wednesday. Now, it heads to the state Senate.

LSU also announced Thursday that it named Daniel Swinton interim Title IX coordinator while they search for someone to take the job long-term. Swinton is an attorney for TNG, a risk-management consulting firm that often works with institutions on issues like Title IX and personnel investigations. He's also vice president of the Association for Title IX Administrators.