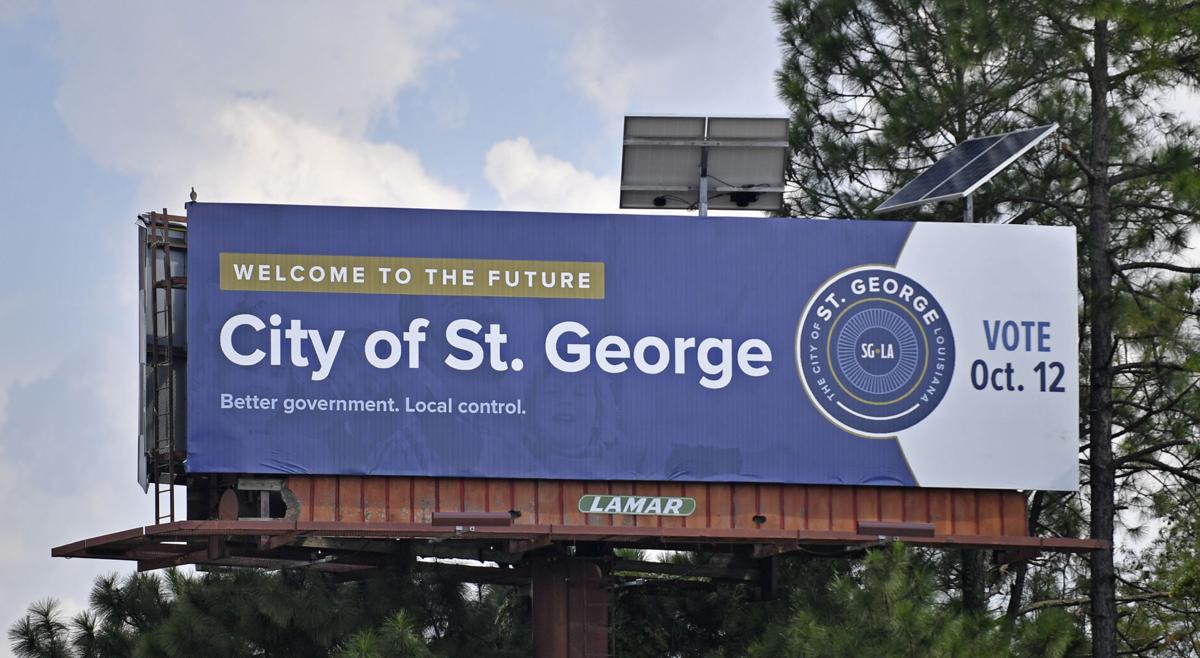 A billboard welcomes drivers to the "Future City of St. George" on Coursey Boulevard near Sherwood Commons, Tuesday, September 10, 2019, in Baton Rouge, La. 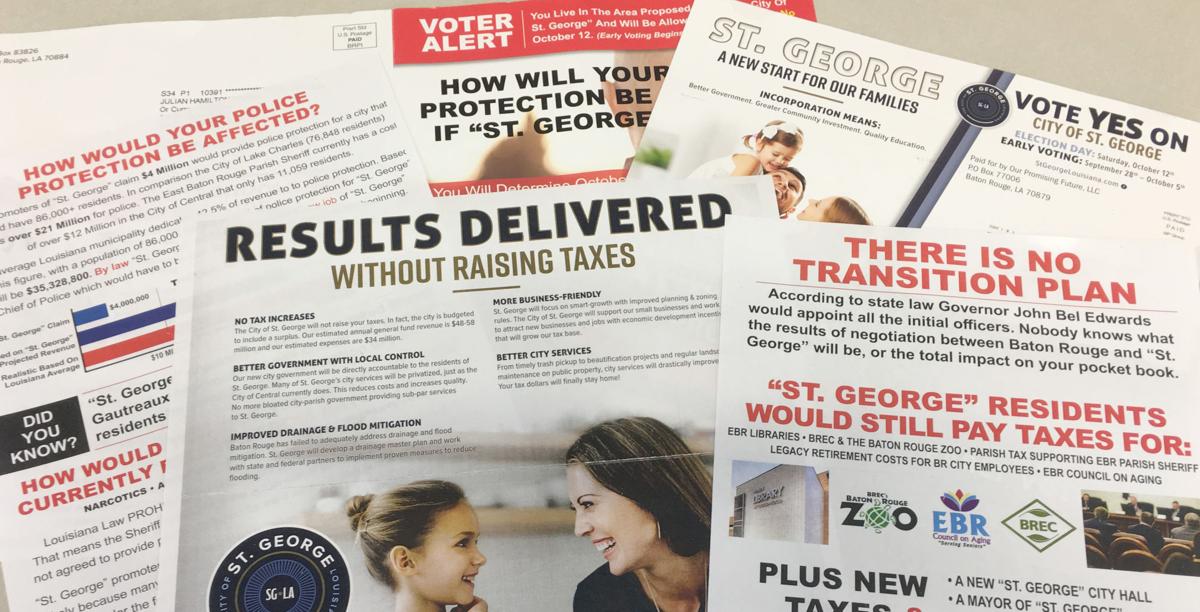 A billboard welcomes drivers to the "Future City of St. George" on Coursey Boulevard near Sherwood Commons, Tuesday, September 10, 2019, in Baton Rouge, La.

The fight over the finances of a proposed City of St. George has been fierce, with proponents saying it will have ample money while opponents charge that taxes will have to go up. Yet, little has been said about the financial impact of a proposed companion school district.

But new estimates from the East Baton Rouge Parish school officials indicate the school system will take a substantial hit, losing $85 million in revenue if a St. George school district's boundaries mirror those of the proposed new city.

St. George-area mailboxes filled with flyers ahead of incorporation vote; here's who is behind them

At the same time, the latest estimates, which were released this past week, indicate that a St. George school system could start out with ample funding, although costs would quickly escalate along with enrollment gains.

Indeed, the latest estimate suggests the new St. George school district could be among the wealthiest in the state. It would open its doors with a budget of almost $102 million, a total derived using the same information the school system used for its estimate and one school officials did not dispute.

It works out to $18,086 a student, slightly higher than the most recent estimate put out by St. George organizers.

Members of the Federation of Greater Baton Rouge Civic Associations on Thursday night grilled the organizers behind the proposed city of St. G…

In addition, the new district expects to start with a diverse mix of students, like the public schools already there.

“We would be one of the most diverse in the state,” said Chris Rials, a St. George organizer.

If all public schoolchildren living in St. George now transferred to the new district, it would be 35 percent white and 44 percent black. The remaining 20 percent would be split evenly between Hispanic and Asian students.

That racial mix, though, could change quickly. The proposed city of St. George is more than 70 percent white. If a new St. George school district proved attractive, its racial mix would likely become more white.

That’s what happened in Central. Before it opened in 2007 as an independent school district, Central public schools were about half white, half black. Today, they are about 73 percent white and 17 percent black.

Voters in the proposed City of St. George will get to vote Oct. 12 on whether they want to incorporate. Early voting will be from Saturday to Oct. 5, except for Sunday, Sept. 29.

If they are successful, St. George supporters hope to use their new status as a municipality to persuade the Legislature to let them create a companion school district.

Why forming a new city like St. George might be easier than starting a new school system

Creating a school district is difficult, perhaps more difficult than forming a city.

Following the path taken by Baker, Central and Zachary in forming their own school districts, St. George would need to get a two-thirds vote of both the state House and Senate to call a referendum to amend the state Constitution. That referendum would then need to pass both statewide and in all of East Baton Rouge Parish.

For his latest estimate, Crochet was able to get the Louisiana Department of Education to simulate the effect a St. George school district would have on the state’s per-pupil funding formula known as the Minimum Foundation Program, or MFP.

In its simulation, the state determined that state MFP funding to East Baton Rouge would increase from $4,217 to $5,024 per child in order to offset the sizable amount of local taxes lost to St. George. At the same time, the new St. George school district would receive just $2,274 per child, about half the state funding those children receive now.

Local sales and property taxes heading to St. George, however, would make up for the loss of state revenue and then some.

Crochet, however, cautioned that the figures he’s relying on are “rough.”

“The reason why they are rough is because the taxing authorities do not have their systems established to capture tax completely for this geographical area,” Crochet said. “The rough estimates of these local taxes directly impacts the MFP simulation provided by the (state).”

Another area of uncertainty is how many students the new school district would attract.

Crochet’s new estimate assumes the new St. George school district would attract 5,636 students. That’s the number of children in parish public schools on Feb. 1 of this year who also resided in the boundaries of the proposed city.

However, 45 percent of those students, or about 2,500 children, were enrolled in public schools outside of St. George. It’s unclear how many of those displaced students would willingly abandon their current schools for the six neighborhood schools and and lone charter school in St. George.

At the same time, the proposed city of St. George is full of children who go to private schools.

About 3,100 children in St. George used public school buses on Feb. 1 to get to Catholic schools all over the parish.

But that’s just a portion of the potential school population.

A U.S. Census survey estimated that in 2017 there were more than 16,300 children enrolled in grades kindergarten to 12 in the 14 census tracts that are partially or completely within the boundaries of the proposed City of St. George. Of those, an estimated 7,700 children were enrolled in private school.

If St. George is immediately popular, drawing hundreds, even thousands of new students, the more the financial cushion of the new district shrinks as it faces spending more to hire teachers and to find or build new facilities to hold classes.

Opponents have repeatedly charged that existing space won’t be sufficient. They say St. George school district would face “a major, and immediate, school capacity crisis” and that taxes would have to be raised to make it work, something St. George supporters furiously deny.

The planning for a new Jefferson Terrace Elementary, which is being rebuilt on 20 acres of vacant land in the same subdivision, has been under…

Jefferson Terrace elementary is being rebuilt blocks away from its current location, and the new school will have space for 200 more students than the current school. And while the old Jefferson Terrace is set to be demolished once the new facility is complete, its 7.2 acres could still be used to house another school.