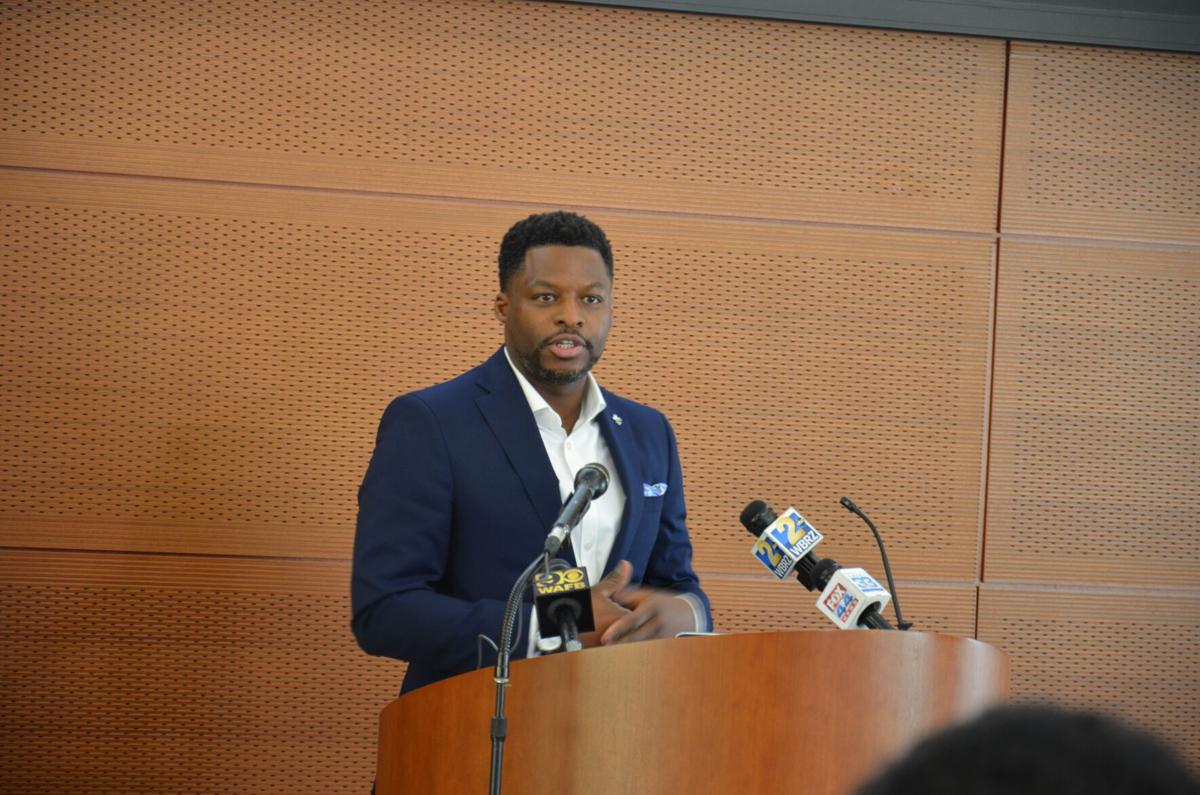 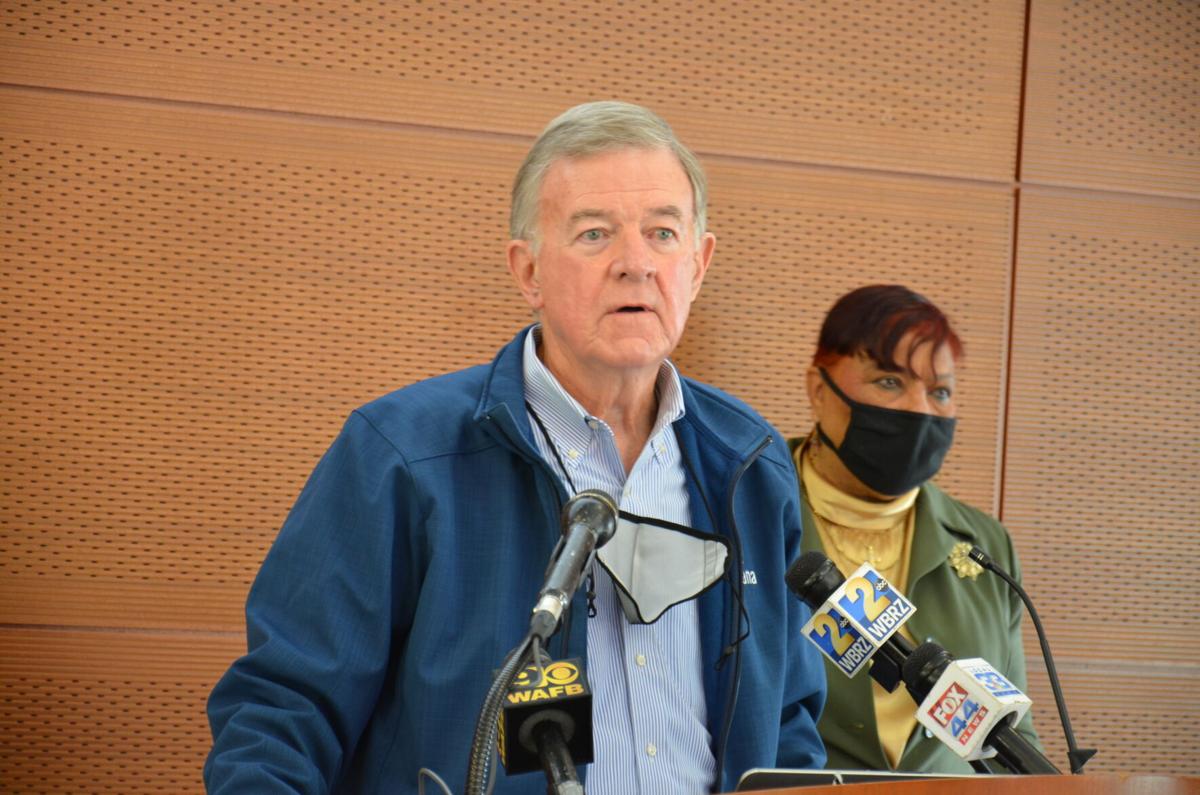 Dan Borné, chairman of the Blue Cross Blue Shield of Louisiana Foundation, explains why the foundation has given $100,000 to support a new early children program called HomeStart that provides technology and help for parents of preschool-age child not in other programs. Standing behind him at the Feb. 9, 2021, press conference is former state Rep. Pat Smith whose is executive director of a nonprofit that is spearheading the HomeStart program.

Dan Borné, chairman of the Blue Cross Blue Shield of Louisiana Foundation, explains why the foundation has given $100,000 to support a new early children program called HomeStart that provides technology and help for parents of preschool-age child not in other programs. Standing behind him at the Feb. 9, 2021, press conference is former state Rep. Pat Smith whose is executive director of a nonprofit that is spearheading the HomeStart program.

Starting next month, 50 families in public housing in Baton Rouge with preschool-age children are receiving tablet computers, books and educational toys, followed by regular virtual and in-person home visits from education coaches who will help to get their children ready for kindergarten.

It’s a modest start to a program that its backers hope will eventually go statewide. It’s meant to narrow both the achievement gap and digital divide between low-income students and their more affluent peers.

“As a former elementary school principal, I’ve seen firsthand how far too many of our children start school behind,” said Chloe Wiley, initiatives manager with Blue Cross Blue Shield of Louisiana Foundation and the founder of a charter school in Baton Rouge.

Wiley’s foundation is providing $100,000 to the initiative known as HomeStart, which represents half its initial budget. The remaining $100,000 is coming from the East Baton Rouge Parish Housing Authority, which has lined up the participating families, Capital One and the Louisiana Bureau of Minority Health Access.

The money will pay for help for as many as 100 families over a two-year period. It’s aimed at families with infants to 4-year-olds who are not already enrolled in preschool.

Nearly half of three and four-year-olds in Louisiana, or about 62,000 children, are not in a nursery or preschool children, and more than half of these children come from lower-income families, according to a U.S. Census survey.

Rudy Macklin, executive director of the Bureau of Minority Health Access, an arm of the state Department of Health, said his office works with children living in poverty across Louisiana and HomeStart has the potential to be a big help.

“This program would be the one to lift them out of their situations,” said Macklin, speaking at a press conference last week.

Early literacy in Louisiana has become a matter of fresh urgency. A recent report found 60% of public school kindergartners last fall who took a screening test were below grade level when it came to their awareness of phonemes, distinct units of sound that distinguish one word from another. That’s 10 percentage points worse than in fall 2018.

Understanding phonemes is key to learning how to read.

Third-graders who took this same screener last fall showed they were still having trouble reading. About half were below grade level when it came to demonstrating that they can comprehend what they were reading. That’s also a decline of about 10 percentage points compared with two years before.

HomeStart seeks to help remedy that.

HomeStart is something of a throwback to educational programs of the past — but married to a modern focus on technology. Theta Williams, who works as a consultant and a community liaison for the collaborative, said much of what HomeStart is doing is building on educational work of yesteryear.

“Several expressions came to mind,” Williams said. “One is, ‘Nothing is new under the sun.’ Another is ‘What goes around, comes around.”

Williams is a retired Baton Rouge educator who spent her career working with children living in poverty. She brought school to the home, particularly for preschoolers in the city’s public housing projects. One well-known initiative from those days was “Gus The Bus.”

“We had buses that had been gutted and outfitted into classrooms,” Williams said. “We took teachers and [paraprofessionals] into the development, and the children and their parents came aboard. We had lessons for the children and we had educational activities for the parents.”

The effort to get young children ready for school at an early age is getting a boost in Pointe Coupee and St. Helena parishes with a grant fro…

Williams also supervised the HIPPY program, short for Home Instruction for Parents and Preschool Youngsters, which offers 3- to 5-year-olds access to at-home instruction. While it no longer operates in East Baton Rouge, HIPPY continues work in Pointe Coupee and St. Helena parishes.

HomeStart is making use of yet another well-known home visitation program called Parent Child Plus, based in Mineola, N.Y., near New York City. It operates in 15 states and six countries, but not currently in Louisiana. Parent Child Plus offers participating families twice-a-week home visits.

HomeStart plans to start its effort with virtual home visits until the coronavirus pandemic eases.

While much of the early childhood world has historically been skeptical of computer use among young children, HomeStart embraces technology. It’s also a sign of the times, thanks to the pandemic.

“There is a wealth of both information and programming available for early childhood education and wellbeing, much of which is available on the internet,” said Executive Director Smith. “Our objective is to teach parents and caregivers how to access that information to help their children stay healthy and start learning at an early age.”

Examples of such programming are LPB’s Bright by Text and East Baton Rouge Parish Library’s Literacy Text. Both involve text messages sent to parents and caregivers. Bright-by Text messages are filled with tips, information and resources from childhood experts. Literacy Text’s messages include daily activities aimed at building the habit of reading in the home.

The Louisiana Federation of Teachers is also providing books and educational toys to participating families.

HomeStart, focused as it is on preschoolers, is meant to complement another initiative the parish Housing Authority is involved in with the parish school system that centers around school-age children. That initiative ensures that the nearly 700 school system students living in public housing, as well another 4,400 families in subsidized housing, have computers and strong internet connections.

That's especially crucial as the pandemic has forced many students to learn at home.

Even with a huge ramp-up in home internet service in Louisiana since the pandemic, more than 10% of households with school-age children still can’t count on regular internet access at home for their education and a slightly higher percentage don’t have a computer or digital device available, according to Census survey data.