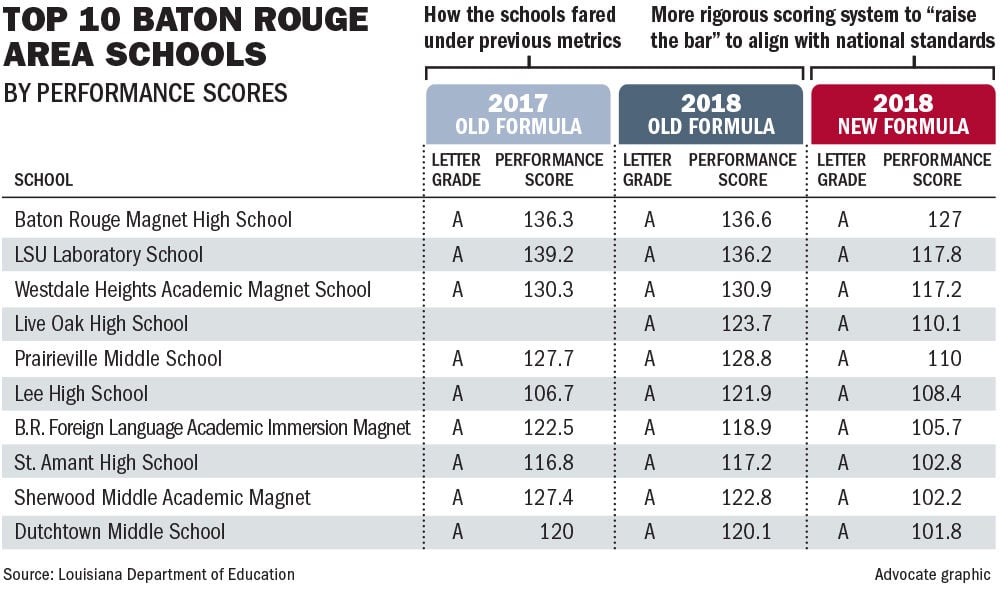 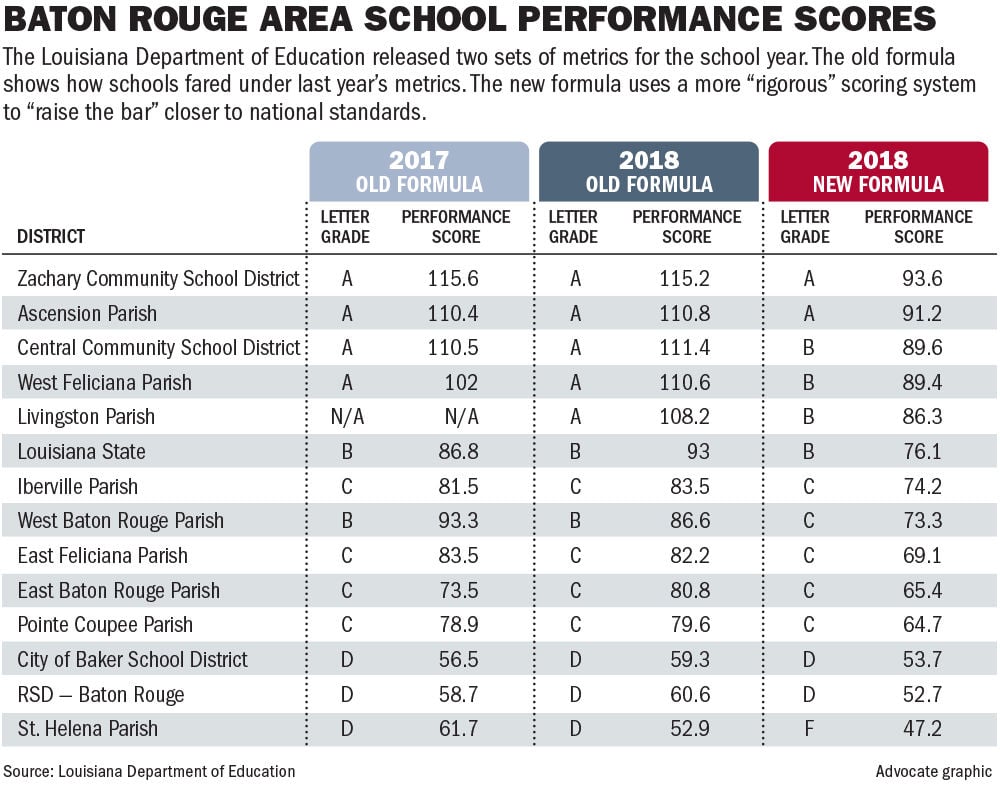 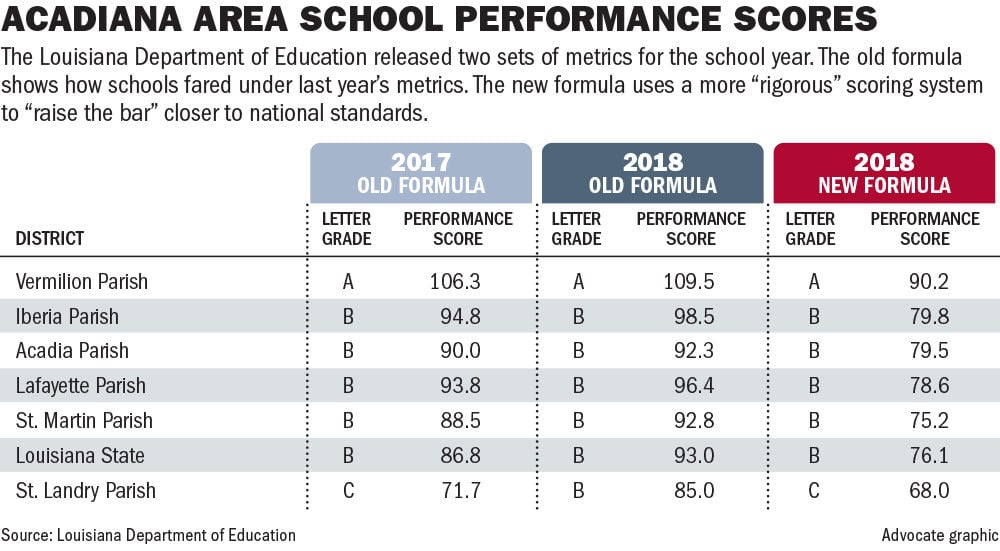 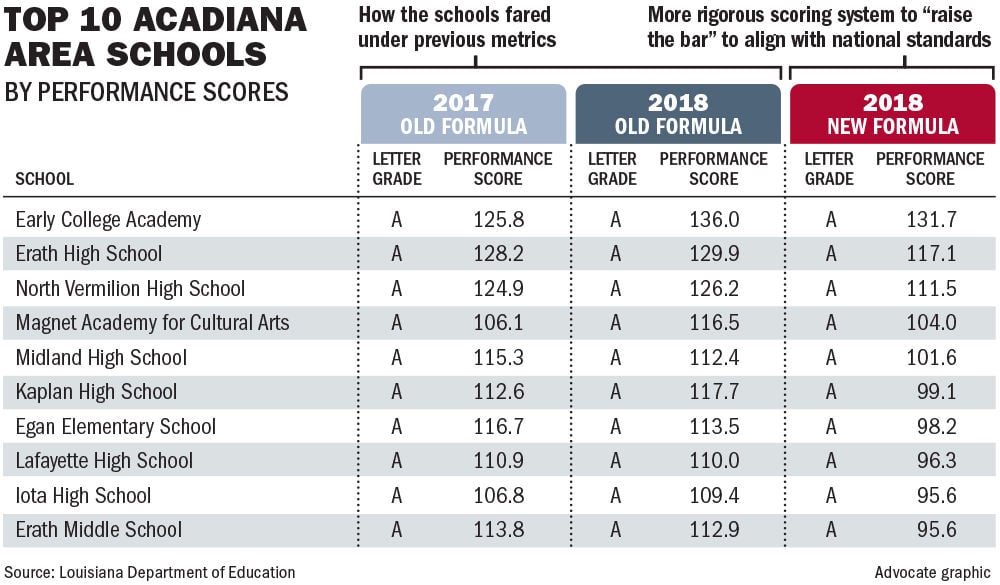 Once again, the Baton Rouge area is leading Louisiana's academic rankings, but thanks to big changes in how the state calculates school and district letter grades the individual schools and districts look notably worse than they did last year.

Three of the top five public school districts in Louisiana and five of the top 10 are in the region, according to annual school academic results released Thursday by the state.

Those five Capitol region districts in the top 10 have historically been awarded A letter grades, this year Zachary and Ascension Parish were the only school districts to still earn an A under the new, tougher system. Central as well as West Feliciana and Livingston parishes slipped to B letter grades.

”Yes, we have higher expectations, and it’s going to take some time for schools and districts to catch up,” State School Superintendent John White said Thursday.

The rankings are part of district report cards for 70 school systems for the 2017-18 school year, which ended in May. The district scores were accompanied by school report cards for 1,320 individual public schools across Louisiana. And for the second year, Louisiana released ratings, or “performance profiles,” on 1,527 child care centers across the state.

The 2017-2018 Louisiana school and district performance scores were released Thursday. The state as a whole maintained a B grade for a second …

The report cards size up how public schools are doing academically. That's largely on the basis of standardized test scores for elementary and middle schools. At the high school level, they also measure graduation rates and the rigor of academic coursework.

The schools are graded on a 0-150 point scale and receive letter grades of A through F.

This year’s report cards were calculated much differently than those last year.

Among the changes, the new report cards give more weight to individual student growth: 25 percent for elementary and middle schools and 12.5 percent for high schools. Last year, such growth was awarded just a 7 percent weight roughly. And student growth, as measured by a complicated statistical process known as value-added modeling, or VAM, covers all students. Last year, only improvement among only struggling students counted.

The state is placing such a value on growth that schools are also receiving a “progress rating” and a special progress letter grade. This is a measure by which many schools shined. In East Baton Rouge Parish, more than 70 percent of district schools earned an A or B, and all but a handful earned at least a C.

Amid new rigor, Louisiana's A-rated public schools are falling, and those with F's on the rise; here's why

In the first report cards since standards were toughened, Louisiana's share of A-rated public schools slipped while those with F's went up, ac…

The new report cards are also tougher because the state has quit curving school grades. The practice began in 2013 as a way to guarantee the same distribution of A and F schools. It began that year because of concerns about drops in scores after the state introduced harder standardized tests.

Louisiana’s school accountability system will continue to get tougher as part of a seven-year plan approved by the state board of education last year.

In the Baton Rouge region, the number of A-rated schools shrank from 41 to 33, while the ranks of D and F schools increased from 60 to 75 schools. Baton Rouge Magnet School continues as the highest-performing public school in the Capitol region and it ranks sixth statewide. The St. Helena Arts and Technology Academy was the lowest-performing school in the region, with an F grade and a low school performance score of 28 points out of a possible 150.

Sixty-six schools in the nine-parish area have been deemed in need of “comprehensive intervention,” seven more than last year. The East Baton Rouge Parish school system's share of those schools grew from 32 to 38.

White said many of these schools are already implementing improvement plans and his office will work with the newly identified schools to find ways to improve.

“No parent wants to send their child to a school with a D and an F report card,” White said.

Worried about big drops in some school scores, the Louisiana Legislature took the unusual step of requiring the state to issue two scores and two letter grades this time around. The first shows how schools and systems fared under the old, more generous system and the second shows the snapshot taking into account new ratings.

Even with the changes, Zachary continues to top state rankings as it has for years. Zachary earned 93.6 points out of 150 under the new system. That’s 22 points lower than the score it received last year. If the old system were still in place, Zachary would have dropped just 0.4 of a point.

A 93.6 used to be a B grade, but as part of the transition to tougher accountability, the state lowered the threshold for an A from 100 to 90 points.

In district after district, growth under the old system emerged as declines under the new system. The most dramatic example locally is West Feliciana Parish, which would have enjoyed an 8.6-point increase. Instead, its new score is 12.6 points below its score from last year.

Once again, the Capital region is leading the way in academic rankings with three of the top four public school districts in Louisiana, while …

Andrea O’Konski, chief accountability officer for the school system, said given all the changes in how scores are calculated, it’s not fair to complete last year’s official school performance score with this year's score.

She said East Baton Rouge Parish actually declined just two-tenths of a point, according to a simulation the state ran showing school districts what their school performance score probably would have come out to if the new system had been in place last year.

Not every district saw big swings in the shift from old to new. Baker City schools would have grown 2.8 points under the old system, but ended up with a new score 2.8 points lower than last year's score.

Some districts would have declined under either system. St. Helena Parish, which fell to last place this year in state rankings, would have declined 8.8 points under the old system. Instead, its new score is 14.5 points lower than the score it had last year.

St. Helena's new district performance score of 47.2 earned it an F grade. Madison Parish is the only other district in state to earn an F this year. Last year no traditional school districts earned Fs.

This year’s scores also mean the end of short-term school accountability waivers granted in the wake of August 2016 floods. So, heavily flooded Livingston Parish received no school grades last year. Special waivers were also granted to 80 more schools across the state. Sixty-two of 81 East Baton Rouge Parish schools were given waivers as were all five schools in Baker.

Incoming, outgoing Baker School Board members weigh in on the district's struggling schools

BAKER — A week after voters ousted three of the five members of the Baker School Board, incoming and outgoing members addressed the latest sta…