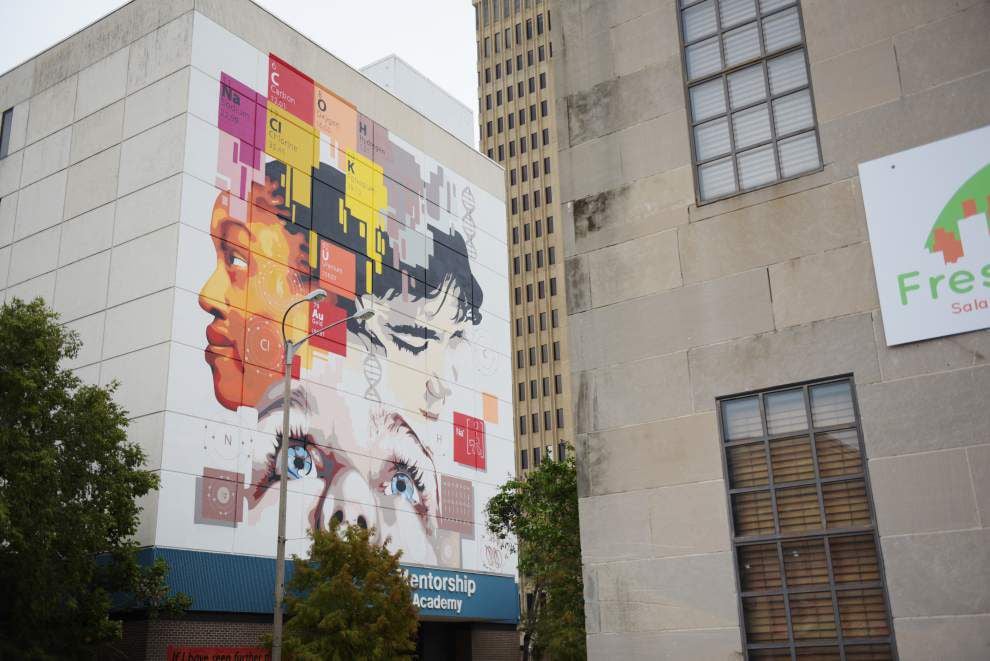 Advocate staff photo by CHARLES CHAMPAGNE — A chemistry-themed mural from the Walls Project colors the side of the Mentorship Academy located on Florida Avenue in downtown Baton Rouge.

Advocate staff photo by CHARLES CHAMPAGNE — A chemistry-themed mural from the Walls Project colors the side of the Mentorship Academy located on Florida Avenue in downtown Baton Rouge.

Fifteen months after approving their application, the East Baton Rouge Parish school system has finally worked out contracts with a homegrown charter group to start two schools in Baton Rouge that could eventually be among the largest in the city.

The proposed contracts clear the way for the fall 2021 opening of Mentorship Legal Academy and Helix Aviation Academy. They would allow Helix Community Schools to expand from its original school, Mentorship STEAM Academy, which opened in 2010, to a total of three schools.

The School Board gave unanimous preliminary approval Thursday to the proposed contracts. The board is expected to finally approve them at its Aug. 20 meeting.

If approved, the contracts would last for four years, expiring in 2025, unless renewed.

No one from Helix spoke on the item Thursday.

“This is merely putting contracts in place to codify the current relationship that the board approved last year,” Shamlin said.

The school system has revamped its contracts after approving a new charter school policy a year ago that makes it tougher for mature charter schools to get renewed to operate. The first such revamped contract was struck last month with Arizona-based BASIS Schools, which plans to open a second school in Baton Rouge, also in fall 2021.

The new Helix schools are the second and third schools to strike new contracts that follow the new district charter policy.

Board watcher James Finney, who has been critical of the slow pace of the contract process, said the two proposed contracts lack necessary safeguards.

“These contracts lack any teeth to protect the public if these charters fail to survive or they are in breach of contract,” Finney said.

The two new schools were planning to open this month for the 2020-21 school year, but changed tack after the coronavirus outbreak arrived in March.

The growth plans laid out in the proposed contracts call for both of the new schools to start with 120 students in sixth grade. But they would grow fast. By 2027, they would each enroll 1,560 students in grades kindergarten to 12.

State law allows these schools to enroll up to 120% of the enrollment caps, so the two new schools could eventually enroll more than 3,700 students.

The Mentorship Legal Academy would start by sharing space at the old bank building in downtown Baton Rouge at 339 Florida St. with the original Helix school, the Mentorship STEAM Academy. The Helix Aviation Academy plans to operate at the Metro Airport at 4400 Airpark Blvd.

1st day of school for some in Baton Rouge: Mostly good reviews for Catholic schools and in Central

The first day of school in East Baton Rouge came for thousands of schoolchildren Thursday, though with coronavirus still a threat, many famili…

Should a Baton Rouge charter school be able to raise the bar for advancing to the next grade?

A popular charter school in Baton Rouge is hitting turbulence as it seeks special standards for promoting its children to the next grade, stan…