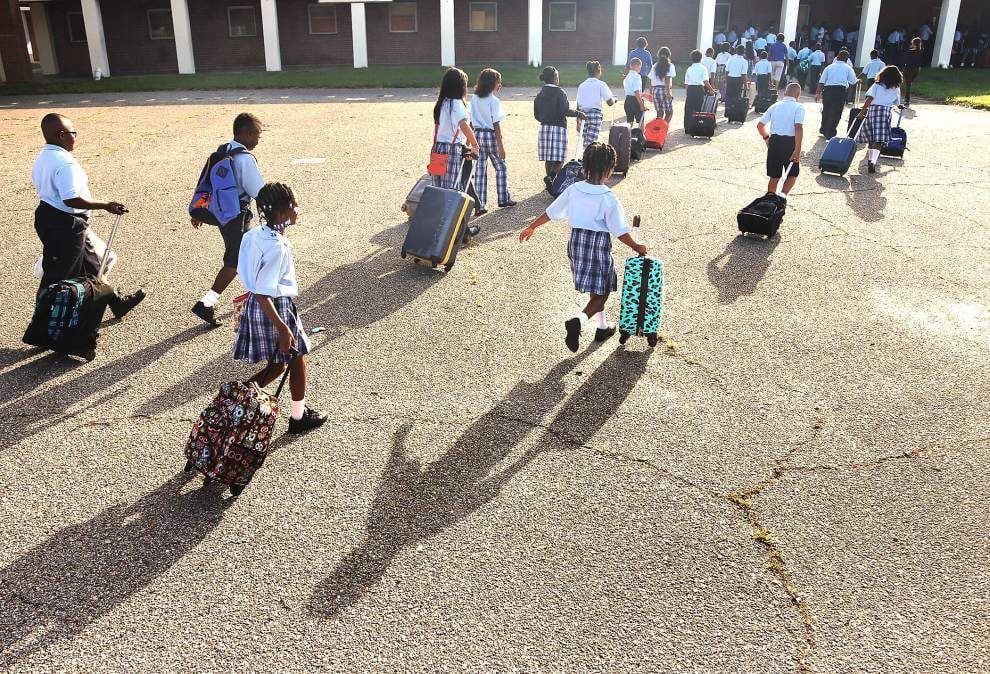 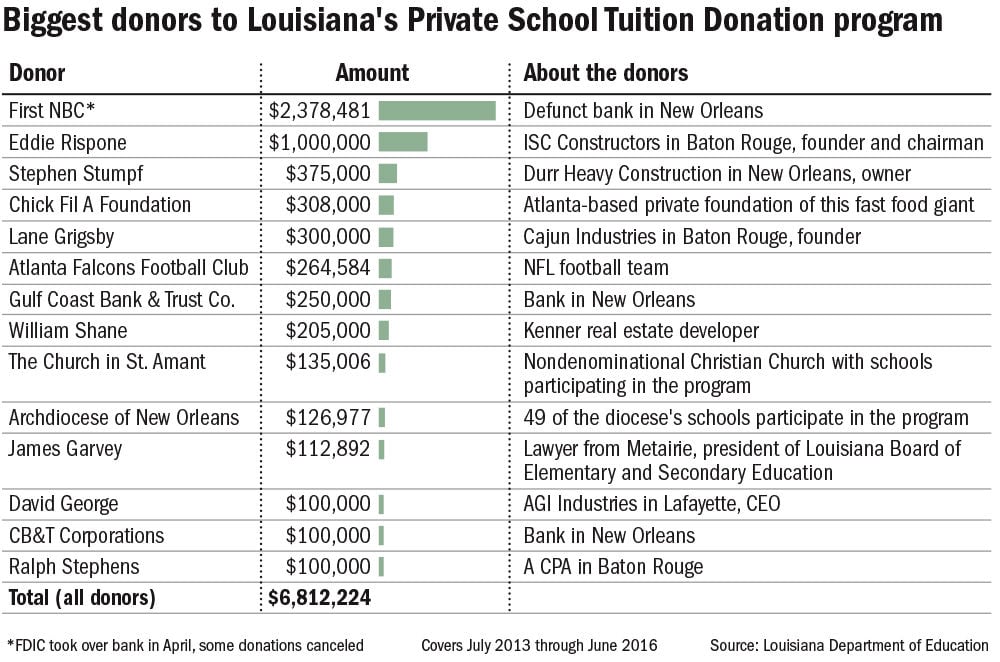 A fast-growing, publicly financed tuition assistance program for Louisiana private schools hit a big snag this year with the demise of its biggest contributor, First NBC.

Before federal regulators forced the New Orleans bank to close in late April, First NBC gave millions to the state’s Tuition Donation Rebate program and committed to giving at least $1 million more. The bank’s failure meant its remaining commitments were canceled, for a time jeopardizing private school attendance for hundreds of low-income children relying on the bank’s largesse.

The decline and fall of First NBC Bank: What happened?

The Tuition Donation Rebate program is the lesser known sister to the state’s much larger private school voucher program. While both were approved by the Legislature in 2012, lawmakers recently reworked the rebate program, changes that some proponents believe could make it stronger as it moves forward.

As vouchers have plateaued — about 7,000 students use them currently and funding has been recently flat at about $40 million a year — the state Department of Education has increasingly turned to the rebate program as an alternate way to publicly support private school education.

The tuition donation program is less generous but more flexible than vouchers, and it has grown fast after a slow start. Following an approach adopted by some other states, it relies on the tax code to direct money to private schools rather than the state appropriations that fuel vouchers. Last year, the tuition donation program allowed about 1,700 Louisiana children to attend 167 private schools, double the enrollment of the year before. Donors to the program are set to recoup about $7 million in taxpayer-funded rebates from last year's scholarships.

The task of trying to find new donors to replace the missing First NBC money fell to private groups known as student tuition organizations, or STOs, which administer the program for the state.

There are three approved STOs in Louisiana. Only two of them, ACE Scholarships and Arete Scholars, place students in private schools statewide. The third STO is operated by the New Schools for Baton Rouge, which is much smaller than the others and has so far worked only with donors and schools in the capital city.

Both ACE and Arete raised significant chunks of money from First NBC. The hole created by the First NBC meltdown meant this year ACE and Arete had to fight just to keep the students they had.

“We had to really gap-fill with donations, so holding steady was the goal,” said Danny Willis, development director for Arete.

Arthur Dupre, the Louisiana director of ACE, the largest STO in the state, said his organization still managed to add about 200 slots statewide.

“We were very blessed to able to cover the existing students and to grow a little bit,” Dupre said.

As of Aug. 7, the Archdiocese of New Orleans, which last year educated more than 40 percent of the children in the program, was still $600,000 short of what it needed. By late August, though, the crisis had passed.

The school superintendent for the archdiocese said donors had come through, supplying the additional money so that all 653 returning students could stay at their 49 Catholic schools. The archdiocese, however, didn’t have money to expand and educate more tuition donation students, as it had originally planned.

Even as First NBC was collapsing, the Louisiana Legislature was quietly revamping the four-year-old program. Commercial entities that do lots of business in Louisiana will still be able to give, but many other current donors won't. Detractors say changes wrongly penalize donors who’ve contributed in the past, while supporters say the revised program should help attract many others to give.

The basic setup is the same. Donors underwrite part, but not all, of a child’s private school tuition. Later, donors get back 95 cents for every dollar they give. And they can write the whole thing off as a charitable donation on their federal taxes.

Starting Jan. 1, though, donors to the program will no longer get recompensed via a state rebate that's paid out of general state tax collections.

Instead, donors will be repaid in the form of a credit on their state income taxes. That’s in line with how 16 other states already organize their own private school choice programs. Their tax payments then will be redirected out of the state treasury and into the hands of Louisiana private schools to offset student tuition.

After the new law goes into effect, only companies and individuals required to file Louisiana income taxes can get a credit. Consequently, past donors who don’t pay income taxes to the state of Louisiana will no longer be able to participate. That includes out-of-state companies such as the Atlanta Falcons, religious institutions like the Catholic Diocese of Houma-Thibodaux and nonprofits that have included the Louisiana Family Forum.

And these new nonrefundable tax credits pay no more than an individual or a company actually owes in income taxes. The credits, though, can be spread out over three years.

It’s unclear whether these changes will slow or accelerate the growth of this program.

All three STOs came out in support of the new law, which was authored by Sen. Dan “Blade” Morrish, R-Jennings.

Supporters predict the credits will be more attractive to donors than rebates since they are paid out much more quickly. Currently, donors don't get their rebate check until after the child receiving the scholarship concludes his or her school year. That worked out to a gap of a year to two years between the time the donation was made and the rebate check was issued. Under the new law, credits “shall be earned when the donation is made.” In practice, that will mean months, perhaps even weeks, for donors to get repaid, not years.

Some states that rely on tax credits have seen their programs grow fast. Florida, in particular, stands out. Started in 2003, Florida’s tax credit program pays for about 100,000 children to attend private school.

The program currently educates only a tiny fraction of Louisiana children who potentially could be eligible. Indeed, 44 percent of families in Louisiana earn less than the tuition donation program’s income threshold; a family can earn no more than 250 percent of the federal poverty line, or about $61,500 a year for a family of four.

Florida’s program educates nearly a third of all children in the state’s private schools and more than 3 percent of all schoolchildren in the Sunshine State.

In Louisiana, several religious groups came out in opposition to Morrish’s legislation. While some see advantages to a tax credit, they objected to limiting the benefit to those required to pay income taxes.

“I just don’t think you got to throw the churches, the nonprofits, the children who are already receiving those scholarships and the high-dollar donors who would give in excess of their tax liability under the bus in order to pass this,” said Gene Mills, president of the Louisiana Family Forum and a member of Arete’s state advisory board, told the House Ways and Means Committee on May 30.

Mills admitted that new donors would likely emerge in their place, but said there's no guarantee.

Arete looks to have to change its donor base the most.

“I’m optimistic that we’ll have an opportunity to grow, but we’ll need more participation, more visibility for that to happen,” said Willis with Arete.

Based in Atlanta, the student tuition organization has drawn hundreds of thousands dollars each from two other Atlanta institutions, the Atlanta Falcons and Chick Fil A’s charitable foundation. Arete has also drawn money from a handful of churches and nonprofits, including The Church at St. Amant. That church last year enrolled 43 children receiving Arete scholarships at its schools in St. Amant and Baton Rouge.

A 36-year-old private Christian school in Baton Rouge is under new management, has a new nam…

Denver-based ACE draws largely from in-state donors, but the organization has received money from religious groups, particularly the Catholic Church, which will no longer be able to participate.

ACE’s Dupre said the new law will mean more work for his organization to diversify its donor pool. But as word gets out, he thinks it will grow even larger than it would have.

“I am incredibly optimistic," Dupre said. “I really believe the door between us merely maintaining the program, and us blowing the doors off it is purely knowledge — people knowing about this and people becoming aware of it.”

Why 2 Louisiana private school tuition programs are still growing, but at slower pace