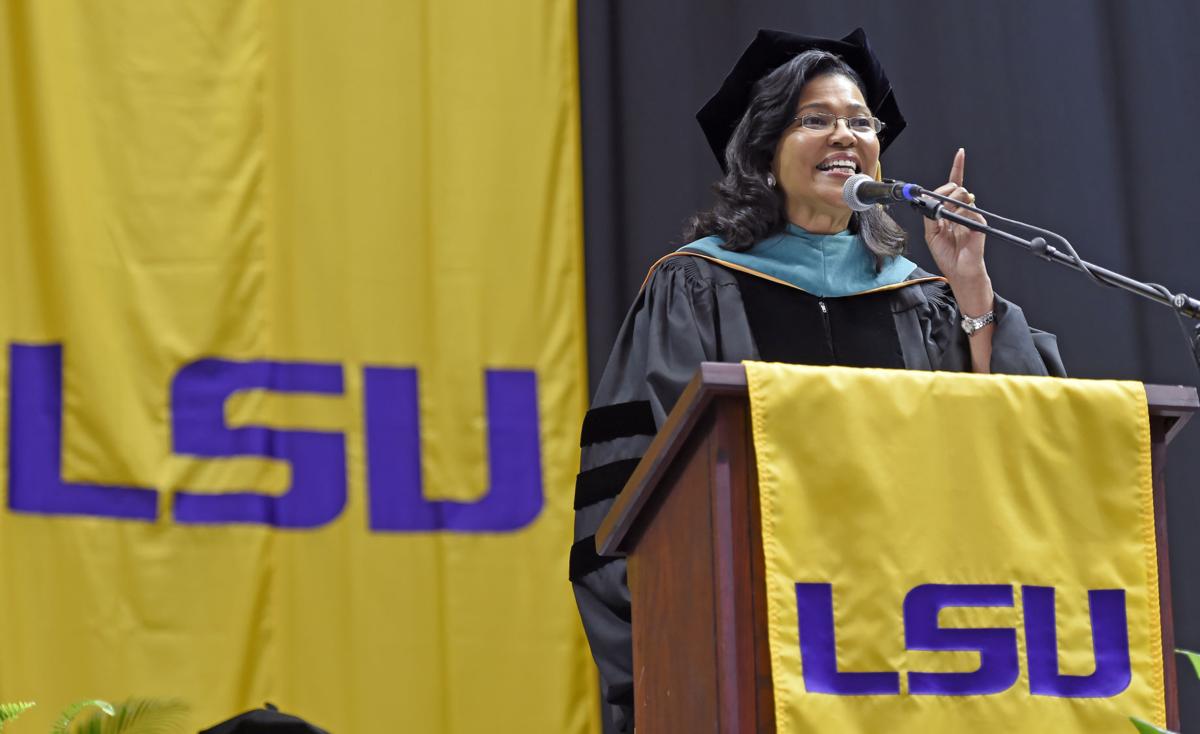 Higher Education Commissioner Kim Hunter Reed, the granddaughter of an educator who never had a chance to attend LSU because of her race, urged the school's summer graduates Friday to share their talents so more state residents have access to education.

"It is community building at its best and we need more of that in our great state of Louisiana," Reed said.

"The baton now passes to you, graduates," she said. "Become an education champion in this state and for this institution so that the door is open for future Tigers."

Reed, the state's first black person to serve as higher education commissioner, was the commencement speaker for summer graduation ceremonies at the Pete Maravich Assembly Center.

A total of 607 degrees were awarded during the school's 296th commencement.

Women make up 52 percent of the class. Graduates ranged in age from 20 to 43.

Reed is a longtime advocate of expanded access to education, especially in a state plagued by poverty and low education attainment for generations.

Kim Hunter Reed, a Colorado educator who has spent most of her career in Louisiana, was picked Wednesday to be the next Commissioner of Higher…

During her 10-minute address, Reed recalled being an 18-year-old LSU student after graduating from a high school that had about 100 students.

"I entered a place that was a whole new world," she said.

Reed said she also quickly recognized her privilege, since her grandparents were not allowed to attend LSU.

Reed's grandmother, Malver Chaisson Herson, was born 100 years ago and spent 36 years as an educator in West Baton Rouge Parish.

Herson earned a bachelor's and master's degree at Southern University, well before LSU was integrated in 1953. She died in 2012.

"And I can only imagine my grandmother, the torch bearer for education in our family, to see me here with all of you," Reed said.

LSU officials say the school has made major strides in recent years in diversifying the campus.

"Particularly with everything going on around the country, Charlottesville and those other things, we have been very cognizant of pressures that many underrepresented students have," LSU President F. King Alexander said in an interview before the ceremony.

"Quite honestly word of mouth has gotten around," Alexander said.

Alexander said, "This is not the old LSU. This is a new LSU and we know we have to look more like the United States, more like this country."

He acknowledged that Reed was the commencement speaker just two generations after black students were not admitted to LSU.

"I think it is perfect, perfect for the tone we are setting," Alexander said.

Enrollment among black students is up 52 percent in the past 10 years and makes up 13 percent of overall enrollment, according to figures provided by the school. About 32 percent of Louisiana's population is African American.

A total of 3,251 black students were enrolled at LSU in 2016, the latest figures available, and 286 students behind Grambling University.

"You are not preparing for that first job but that 10th or your 12th job," she said.

The commissioner said graduates, along with their families and others, deserve credit for sticking with their goal of earning a college degree. "Whatever the challenge, you dug deep, you stepped forward and you did it," she said.

"As you walk across this stage ask what is the it that will define your life and your career," Reed told students.

Reed has a master's degree in public administration from LSU and a bachelor's degree in broadcast journalism from the school.

She also received a doctorate in public policy from Southern University.

Reed was named higher education commissioner by the Louisiana Board of Regents in April.