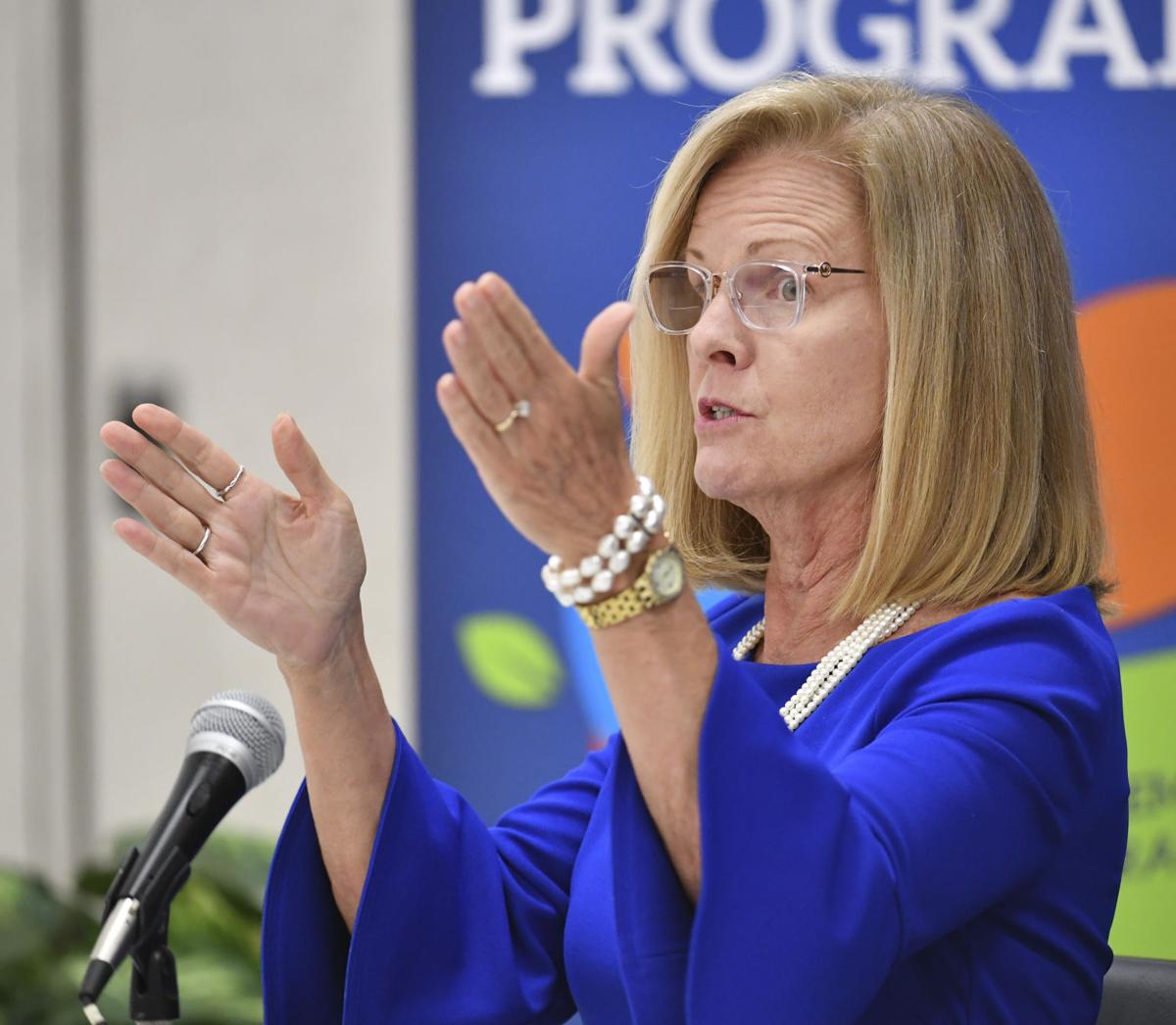 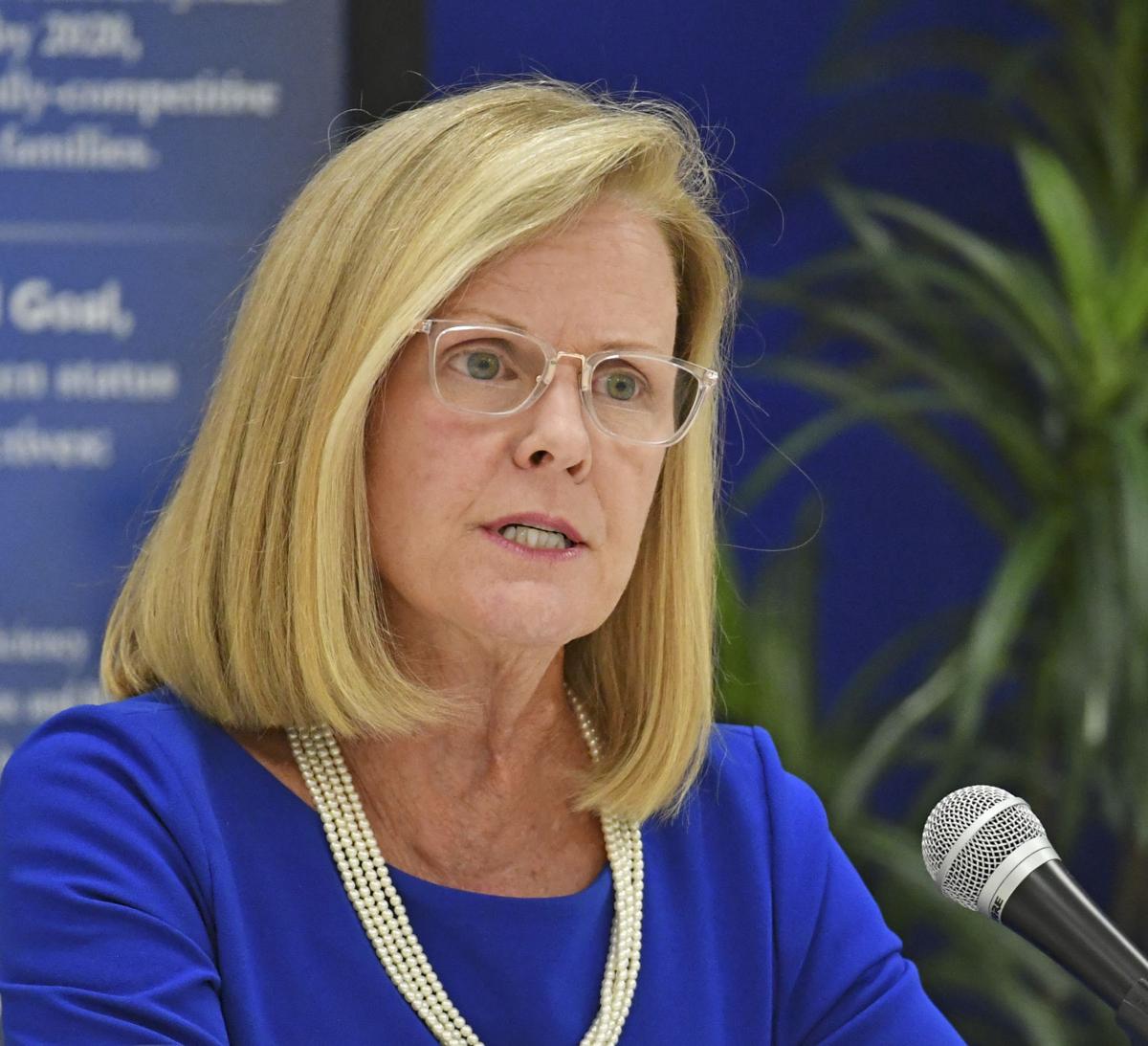 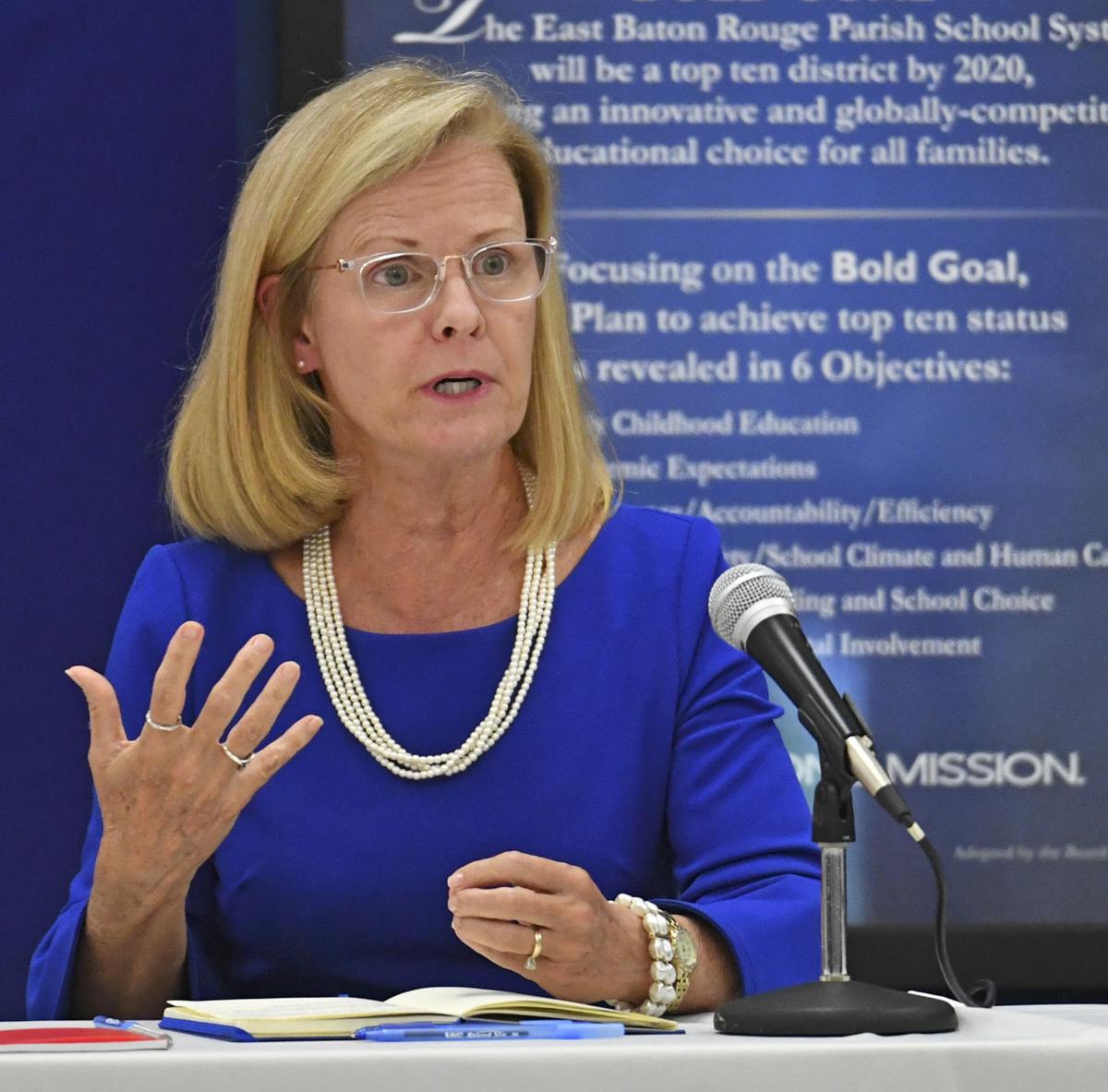 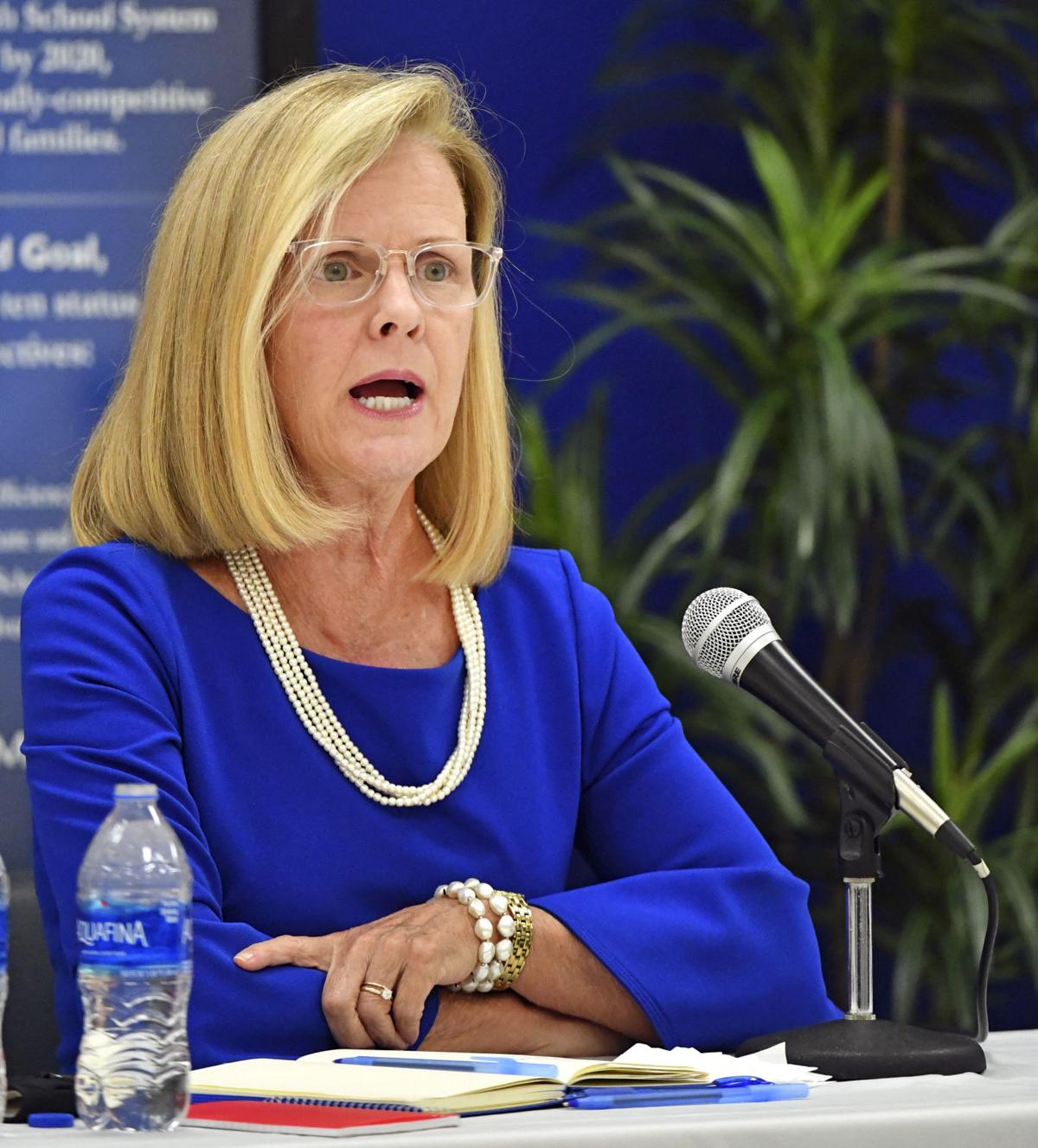 Watching online from her parent’s home on Lake Sherwood in Baton Rouge, Leslie Brown had to wait more than seven hours, until early Friday morning, before learning she would be the next superintendent of East Baton Rouge Parish public schools.

Brown, 62, lives in Fort Lauderdale, Florida, where she serves as chief of portfolio services for Broward County schools, but she’s spent the past couple of weeks in Baton Rouge, a city she considers a second home.

After the vote, Brown took immediately to Twitter and thanked the East Baton Rouge Parish School Board and many others she met in Baton Rouge during the lengthy search.

The busiest stretch was from June 9 to 11, three days filled with school visits, public interviews and sit-downs with a series of smaller groups interested in education.

“This is a homecoming for me, and I cannot wait to see you soon,” Brown tweeted.

In an interview Friday, Brown said the at-times fiery public debate the previous night was informative.

“Lots of passion, lots of great comments,” Brown told The Advocate. “I felt that the community had a great opportunity to express all their feelings.”

The vote was close. With five votes, Brown earned a bare majority of the board. Fellow finalist Nakia Towns, chief of staff for Hamilton County, Tennessee, schools, received four votes.

The board had just voted on a far more racially fraught matter, the process of renaming Lee High School so it’s no longer associated with Confederate general Robert E. Lee. The unanimous vote was preceded by a lengthy, often passionate discussion in which African American board members spoke at length and emotionally, while their colleagues mostly listened in silence.

The superintendent debate had its own fireworks.

After the superintendent vote, Chambers reserved his ire for Collins. He promised to work hard against her as she seeks a seat on the Metro Council this fall.

Collins listened in silence, but responded the following morning on Facebook with a lengthy statement justifying her vote for Brown. She noted that earlier in the search she supported local Black applicants, but they failed to get enough votes to become finalists. She said Brown’s track record stood out to her more than Towns’.

“Brown is coming from a district that significantly outperforms our own, and she's been there in positions long enough to actually take credit for some of that success,” Collins wrote.

Brown said Friday that she thinks the previous night’s discussion strained board relations only temporarily.

“That may have forced people a little bit apart, but I believe that that board will be able to work 100 percent as a team in the very near future,” she said.

Special committee to rename Lee High School OK'd by EBR school board; here are next steps

Four years after balking at the change, the East Baton Rouge Parish School Board is poised to change the name of Lee High School, which has be…

Brown said she will return to Florida briefly, but will be back in Louisiana soon.

“I have some projects that I have been working on in Broward County and I want to make sure that they land in the right place,” she said.

It’s not clear yet how soon she’ll return. She said she spoke Friday with a “very gracious” outgoing Superintendent Warren Drake about transition plans. The School Board has extended Drake’s contract from June 30 to July 31 so the two will overlap.

“I’ve been very impressed with his work so far,” Brown said.

Brown won't officially take over until Aug. 1 and still has to work out an employment contract.

Brown said she’s not going to start with an immediate administrative overhaul. While she’s been impressed with many she’s met in the school system, she said, she also wants to see if they share the same "core values.”

“I have a strong commitment to understanding first and making decisions after,” she said.

Brown’s ties to Baton Rouge go back to when her parents, Robert and Gerry Marks, moved here in the 1970s. The couple moved a lot while their three daughters grew up, but Baton Rouge was their final home; they both died within the past year.

Brown, then Leslie Marks, did not immediately join her family in Louisiana, opting to finish her senior year at South Plantation High School near Fort Lauderdale. There she met her future husband and fellow educator, Bill Brown. She says she lived in Baton Rouge the summer after she graduated, but moved back to Florida for college and stayed.

Her sister, Chris, stayed in Baton Rouge, and is married to Steve Jackson.

Brown has spent 41 years in education in Florida, including seven in her current position in which she oversees an array of magnet, charter schools and special programs.

She worked her way up, starting with 12 years in the classroom and seven years as the director of a magnet program, before heading to the Central Office. She also worked from 2004 to 2007 as the principal of a charter school in Hollywood, Florida, run by the for-profit Charter Schools USA, which has two locations in the Baton Rouge region.

Like fellow finalist Towns, Brown has never been a school superintendent. In Broward County, she is one of 10 chief-level administrators and one of more than a dozen people in the senior cabinet.

Broward is the seventh largest school district in the nation, with more than 270,000 students. That’s more than six times larger than the East Baton Rouge Parish school system, which has more than 41,000 students.

Brown laid her initial thoughts on what she wants to do in her new job in a lengthy “entry plan” submitted prior to the superintendent vote. It focuses heavily on how to reopen Baton Rouge schools that closed in March due to the coronavirus outbreak. In the plan, she says she will focus first and foremost on “health, safety and emotional wellness” of students and staff.

“It is very critical that we really follow the data and make sure that we follow the protocols that are in place,” Brown told The Advocate.

Next is “academic continuity,” which she said will be accomplished with an “equity-focused approach” to budget, staffing and resources.

“COVID has shown a huge bright light on the disparities in public education,” she said.

Schools this fall will likely offer a hybrid of in-person and digital education, with digital education likely the primary approach for families still uncomfortable sending their children to school, she said.

In addition, she promises regular communications on what the school district is doing and “transparent metrics” for the public to gauge progress.

Given that the new school year is starting Aug. 6, just a few weeks from now, more ambitious changes may have to wait. These in part will be driven by an effort to update the school system’s strategic plan, last updated in 2016.

Brown said she will spend a lot of time listening to what people want and that she views her work as a larger collaboration. She said she will start with the dozens of people she met earlier this month during small group interviews of the finalists.

“I really feel strongly that I have to focus on the community,” Brown said. “The opportunity to really work with multiple parts of the community during those small group sessions gave me an unbelievable network of people who were just waiting to be involved.”