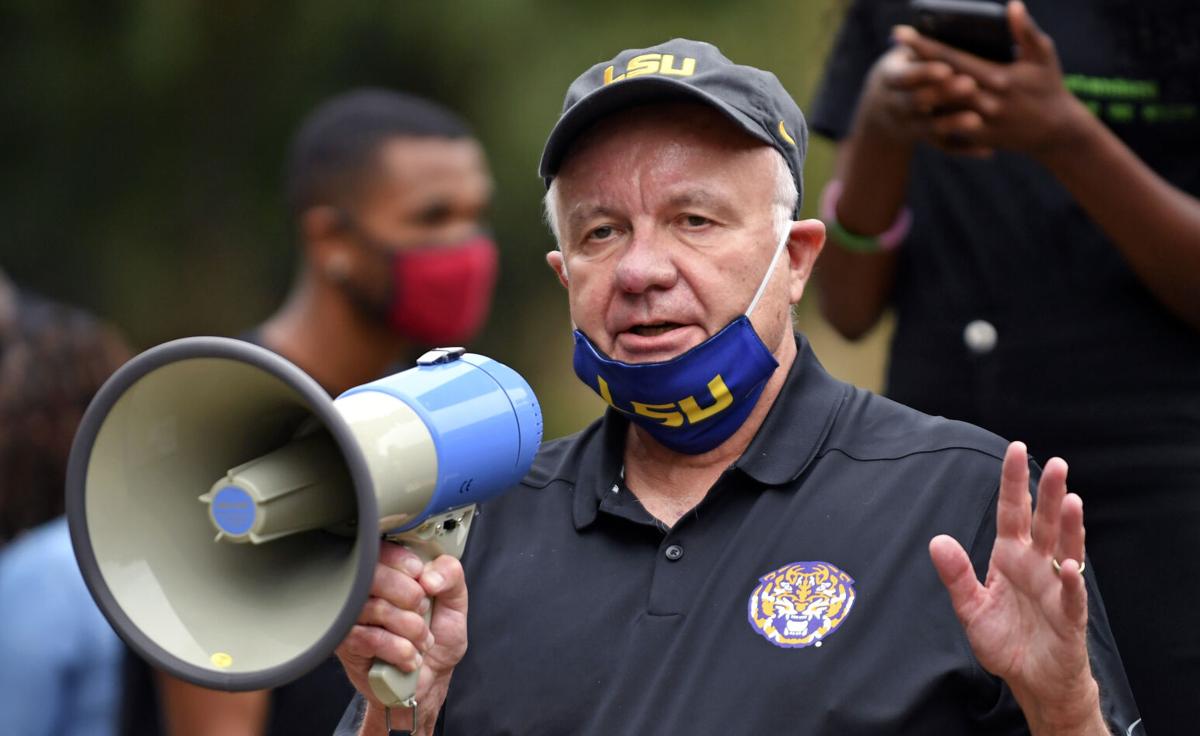 LSU interim president Tom Galligan speaks during a demonstration to call for unity and promote change on campus, June 3, 2020, in the quad at LSU in Baton Rouge. 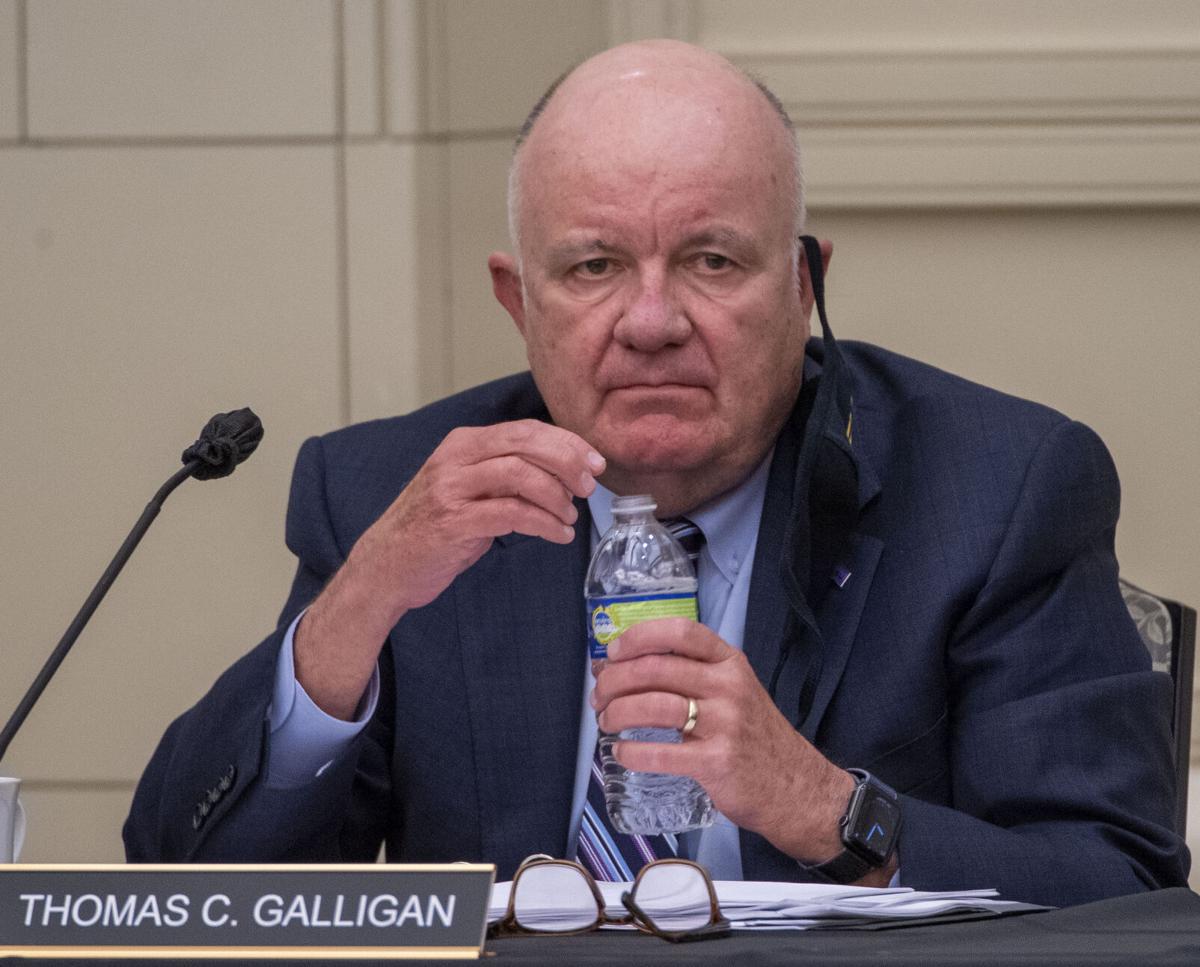 LSU Interim President Tom Galligan and LSU board members listen to attorney Scott Schneider, via Zoom, as LSU releases their Husch Blackwell report on sexual assault/misconduct cases at their Board of Supervisors meeting Friday March 5, 2021, in Baton Rouge, La.

LSU interim president Tom Galligan speaks during a demonstration to call for unity and promote change on campus, June 3, 2020, in the quad at LSU in Baton Rouge.

LSU Interim President Tom Galligan and LSU board members listen to attorney Scott Schneider, via Zoom, as LSU releases their Husch Blackwell report on sexual assault/misconduct cases at their Board of Supervisors meeting Friday March 5, 2021, in Baton Rouge, La.

Though Tom Galligan had been thinking about withdrawing his name from consideration of LSU’s top job since visiting his grandson a month ago, he didn’t decide until Sunday morning.

“I said alright, I’ve made my mind up. I tell my wife and I went out to get bagels for us,” Galligan said in a Tuesday interview after announcing he wouldn’t apply before Saturday’s deadline.

“My shoulders, my back was about as loose as they’ve been in about year, so I think that means it’s the right decision,” he said.

LSU’s presidential search committee is meeting at 3 p.m. Wednesday. The committee hopes to choose which candidates to interview by April 21, conduct interviews by April 26 and select finalists by April 30.

The candidates, so far, are unknown. But University of Louisiana System President Jim Henderson said Tuesday he’s interested in the job.

Back in October, when LSU was just struggling with the COVID-19 pandemic and a more intense look at the flagship’s racist past, Galligan said he “got the bug” after running the place for 10 months and wanted to make permanent his interim status as head of a statewide system of colleges, medical schools, and research facilities as well as chief of the Baton Rouge flagship campus.

But that was before the scandal broke about decades-old practices of covering up complaints of sexual misconduct lodged by young female students. Galligan ordered a deep investigation of how harassment complaints were handled. The results were scathing.

Galligan was called to the State Capitol and harshly criticized by legislators for not firing people and for moving methodically but not fast enough in fixing the university’s procedures for reporting and investigating complaints.

“Certainly it has been stressful for all of us in the past five weeks. It makes you look at priorities,” Galligan said. “We’re trying to do the right thing.”

He recalls his daughter telling him, “this is better for your health in the long run and she’s right.”

At 65, Galligan would be 71 after the five-year minimum commitment for which LSU is looking. He and his wife traveled in March to Concord, New Hampshire to spend time with his 14-month-old grandson, Gilbert. “It just hit me if I’m president, even with the best intentions, I’m going see him less. I’m going to see my kids less,” Galligan said.

He hopes to return to the LSU Paul Hebert Law Center, where he was dean before being tapped as interim president when F. King Alexander left at the end of 2019.

Galligan teaches torts and maritime law but will pick up whatever courses are needed.

His tenure started out with a national football championship. He then steered the university through closure and staged reopening because of the pandemic. He oversaw intense challenges of diversity, equity, and inclusion, dealt with hazing issues and the controversial awarding of an $810 million energy deal without a public bid.

It was his decision to commission the law firm Husch Blackwell's deep dive into LSU's Title IX practices, and Galligan oversaw the release of the report and made the decisions about how to discipline employees involved. He chose not to fire anyone, which prompted backlash from both students and lawmakers.

While Galligan has been the face of LSU for more than a year, his job has often involved taking heat from state legislators over messes at LSU that he did not start and apologizing to survivors of sexual assault on LSU's campus over policies from previous administrations.

Former football coach Les Miles was pushed out of his coaching job at Kansas after the report detailed allegations of inappropriate behavior with young female students – and LSU’s coverup of those claims – while he was at LSU. (Miles denies the allegations.) Alexander, Galligan’s predecessor, resigned his job at Oregon State for his role in the cases.

In a letter to campus Tuesday, Galligan wrote about the personal tragedies that his own family has recently faced. One of his daughters was diagnosed with cancer in 2018 while she was in medical school and died in 2019. Her death came just a few months before the LSU Board of Supervisors tapped Galligan to take over the president's job on an interim basis.

"Given both personal and professional considerations, I have decided it is time for me to return to the Law Center and spend more time with my family and my students," Galligan wrote.

LSU leaders say they can't require students to get COVID vaccine, but strongly encourage it