Cedric Floyd, left, addresses the East Baton Rouge school board, while Mike Hefner (right) looks on. The board recently voted to hire Hefner over Floyd as its demographer to help it draw new district maps because of the 2020 Census. 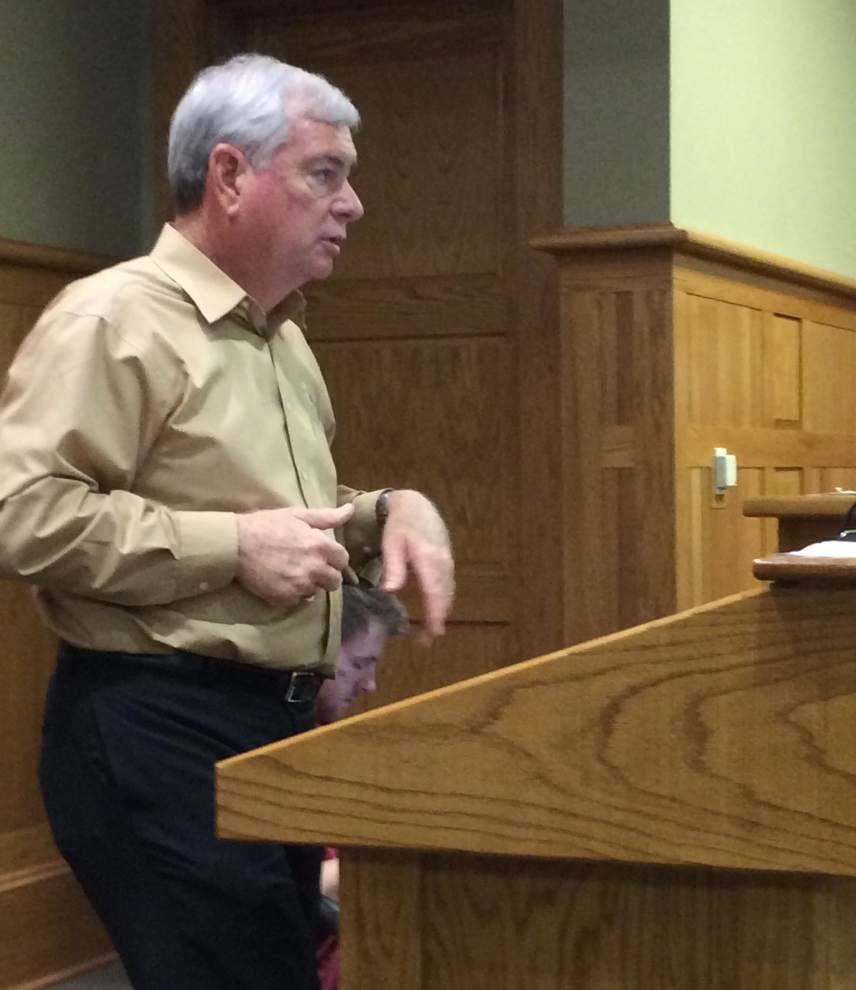 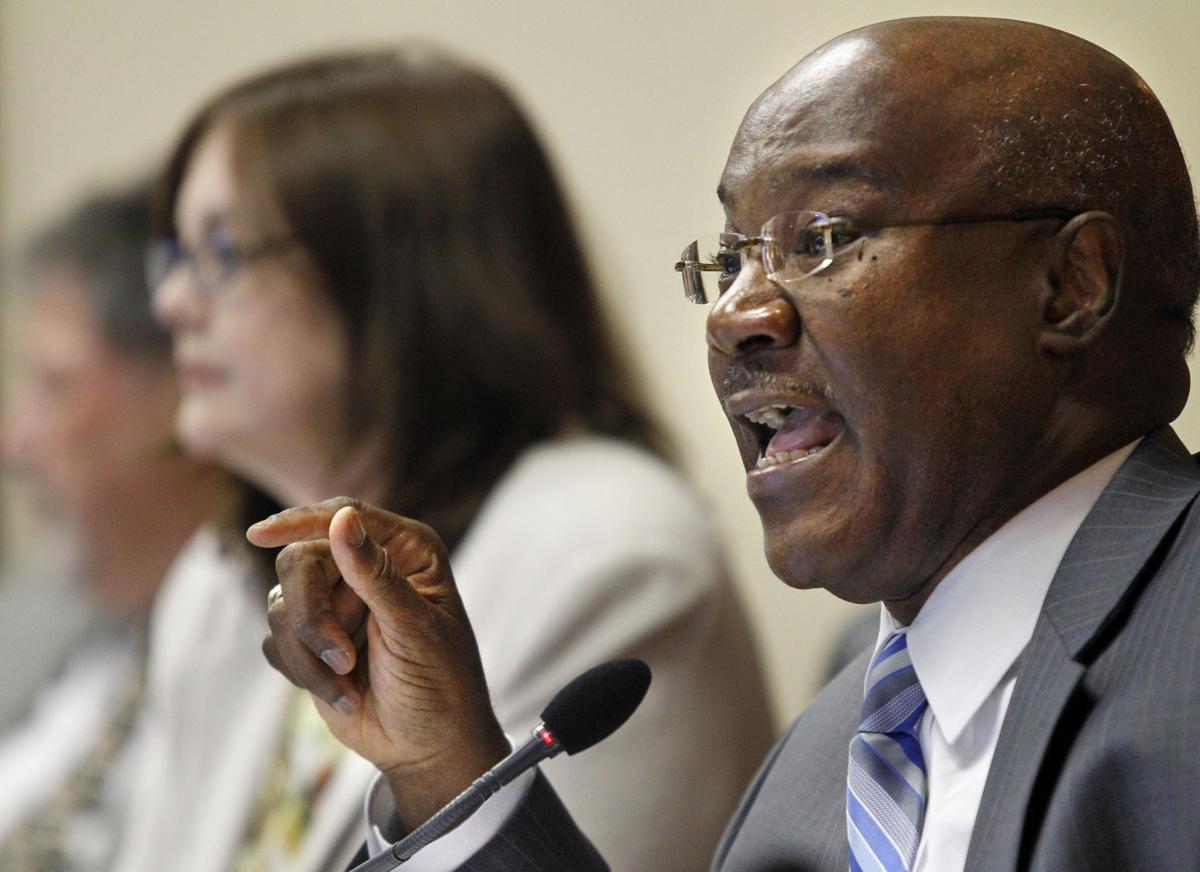 Cedric Floyd, left, addresses the East Baton Rouge school board, while Mike Hefner (right) looks on. The board recently voted to hire Hefner over Floyd as its demographer to help it draw new district maps because of the 2020 Census.

After getting dropped by its first consultant, the East Baton Rouge Parish School Board has settled on someone new to redraw the boundaries of its election districts — but not before a rancorous vote and mudslinging by the two consultants still in the running.

The consultants were joined in the mud-throwing by board members who supported them.

Mike Hefner, chief demographer of Geographic Planning & Demographic Services, ultimately won. He edged out Cedric Floyd, president of Data Center, in a 5-3 vote that broke along racial lines. Hefner is White and Floyd is Black.

Afterwards, Hefner wasn’t happy with how he conducted himself, saying he’s usually the one trying to calm people down, not rile them up.

“Was not my proudest moment. It was not how I expected it to go,” Hefner said.

The two sides accused the other of developing legally suspect maps that the other later successfully redid. They pointed to times when the other consultant has been sued or their professional work has been rejected.

And finally, Floyd was confronted with accusations of misconduct while he served on the Jefferson Parish School Board, including a restraining order against him by a fellow board member as well as settlements of $60,000 and $22,500 reached with former school secretaries who claimed Floyd harassed them.

The firm helping the East Baton Rouge Parish School Board draw new district maps has quit, saying three board members would not sit down with it.

Hefner is taking over the remapping job two weeks after the first consultant, Strategic Demographics, LLC, withdrew, citing lack of cooperation from three board members who failed to sit down for one-on-one meetings to discuss their ideas for their respective districts.

Unlike Strategic Demographics, Hefner eschews such one-on-one meetings, calling them unproductive and potential sources of mistrust within the board.

“My process brings you all together as a team,” he explained to the board. “I like doing this collectively as a group, that way everybody hears the same thing at the same time.”

“I come with a starting plan, but we build these plans in public,” he continued.

The Nov. 8, 2022 elections for School Board are driving the timetable. To be ready for that election. the board must approve new maps, which are necessitated by the 2020 U.S. Census, by no later than June 21. But since the board is required by law to publish proposed maps well in advance of approval, the true deadline is May 24.

Several East Baton Rouge Parish School Board members had hoped to be finished or nearly finished by now, but were delayed by the late release of data from the Census and then again by the withdrawal of Strategic Demographics.

Hefner and Floyd are longtime competitors, vying for redistricting clients across Louisiana. On Nov. 16, two days before East Baton Rouge's vote, the Caddo Parish School Board picked Floyd over Hefner. Hefner, who lives near Lafayette, said he expects to have about 100 clients for this Census, while Floyd, who lives in Kenner, said he’s representing about 20 clients.

Hefner, like Floyd, is a former elected school board member — Lafayette Parish in his case. They’ve both been doing redistricting for decades and both work with their spouses.

East Baton Rouge and Caddo both used an in-house committee to rate the proposals. In both cases, Floyd earned the most points, but just barely — a three point advantage in Caddo and four points in East Baton Rouge. In East Baton Rouge, Strategic Demographics trailed both by more than 20 points.

“We had a fair process that we chose to go through and he rose to the top,” said board member Dawn Collins, who voted for Floyd.

Strategic Demographics won the job in August in large part because of past work with the school board, including its last redistricting in 2014. Hefner has also worked with the school system before, though not on redistricting. In 2017, he developed student enrollment projections that helped inform the development of school construction projects approved by voters in April 2018 when they renewed a 1-cent sales tax.

Board member Mark Bellue said external committees are useful when “we’re dealing with an area that none of us are experts in” such as selecting an architect — but not in this instance, he said.

“It wasn’t helpful to me in determining how we as a board come up with a plan because we’re the ones that are going to be working with him, whoever the demographer is,” Bellue said.

Floyd’s $25,500 proposed fee was the lowest of the three applicants.

“Because of my efficiency and because of my costs I’m able to effectively beat Mr. Hefner every time,” Floyd argued.

Hefner’s $40,000 fee was the highest. Hefner said he loses points on his pricing, but it has an upside.

“You get a much higher level of service with my work,” he argued. “I know that my clients tell me that. Even his past clients that use me now, tell me that.”

Hefner said the higher price for East Baton Rouge Parish — $14,500 higher — is partly because he anticipated more public meetings would be called for than other clients. But it’s also due to the difficulty drawing accurate maps in a parish where East Baton Rouge is just one of four school districts.

“Out of all the school board districts in the state, yours is the most complex,” Hefner explained. “It takes a lot of accurate programming to make sure the data is correct before we even start.”

Floyd and Hefner came in person to the Thursday, Nov. 18 School Board meeting to make their respective cases.

Floyd, who presented first, didn’t initially mention Hefner, instead discussing his own 40 years of “unmatched experience” in the field.

Hefner, however, didn’t lay off his old rival, suggesting Floyd is not as successful in court as he was saying.

“The first expert witness case I had was actually a challenge to Mr. Floyd’s plan with the Baker school system,” he recalled.

Later, when questioned about the Baker case, Hefner elaborated.

“(Floyd) stated that he’d never had a plan rejected,” he said. “My statement to you is that that is not entirely true.”

Hefner denied that he was unfairly criticizing Floyd.

“This is all in the courthouse,” Hefner said. “These are not allegations.”

Hefner recounted how in 2002, the new Baker school district adopted a plan drawn by Floyd that quickly ran into legal problems. The Advocate covered the case extensively at the time.

The plan was “precleared” by the U.S. Justice Department, but was flagged by state election officials for dividing more precincts than allowed by state law. That led to a lawsuit involving the state’s department of elections. That agency then hired Hefner to double check Floyd’s handiwork. He said he quickly found it lacking.

“(Floyd) said there’s no way you can draw a plan that doesn’t violate the number of precinct splits that are allowed in school board districts,” Hefner recalled. “It took me 20 to 30 minutes after I got a call from the state to develop a plan that had all the proper numbers and representation without splitting an excessive number of precincts.”

A Baton Rouge judge soon after ruled against Baker, forcing the rescheduling of fall 2002 school board elections to the following spring. Three board members tried unsuccessfully to overturn that ruling.

“Your competitor got up, made a presentation based on his own merits and threw absolutely no shade at you,” Collins said. “You stood up there and pretend to be spotless.”

Collins then proceeded to share a couple of spots.

Lafayette Parish Government successfully defended those maps against a legal challenge, but in 2019 it sued Hefner to try to recoup $100,000-plus spent on legal defense. Hefner has countered in court papers that it was not him, but the negligence of city-parish officials and attorneys that prompted the litigation. The case is ongoing.

Demographer Mike Hefner, who was sued by Lafayette Consolidated Government over discrepancies between new city and parish council district des…

Collins also mentioned a St. Martin Parish school desegregation case in which last summer a federal judge in Shreveport rejected expert testimony Hefner gave arguing there’s been meaningful racial integration over the past five years in three communities in the parish under court scrutiny. The parish school board has appealed.

Later Collins gave the floor to Floyd to defend himself against what Hefner said about his work in Baker. Floyd professed ignorance.

“I don’t know what Mr. Hefner is talking about in terms of the Baker School Board or whatever,” Floyd said.

Floyd instead went on offense. He said in 2001, he was the one who ended up salvaging a remapping that Hefner botched involving the St. Mary Parish Council.

The council approved a Hefner plan back then that would have eliminated one of the two majority Black council districts, because of a drop in Black population, only to later rescind its approval in favor of a new map Floyd drew that preserved two majority-Black districts.

As it turns, according to a news account, Floyd shared that same story Wednesday night with the St. Mary Parish Council, helping to persuade that body to not hire Hefner for their upcoming redistricting.

The mudslinging Thursday night wasn’t over.

Board member Mike Gaudet shared the litigation that Floyd faced while he served on the School Board in Jefferson Parish. He also noted that in 2018 a judge ordered Floyd to stop disseminating “inaccurate and scurrilous” fliers against his opponent in a 2018 School Board election that Floyd ended up losing.

Gaudet concluded that while Floyd is likely a “fine demographer,” Gaudet doubts that he could work effectively with the board and the local community given his past and his behavior.

“Given the things that I’ve seen in here and other people I’ve talked to, I cannot have that trust in Floyd,” Gaudet said. “I would not like him out there representing us as a consultant.”

With defeat of Cedric Floyd, Jefferson Parish School Board loses a controversial firebrand

When the Jefferson Parish School Board convenes in January, there will be one glaring absence: two-term board member Cedric Floyd, a controver…

Floyd returned and gave a lengthy defense, connecting a lot of his troubles to conflict with former board member and attorney Michael Delesdernier whom he said pulled an “election prank” to get the restraining order against him and then went fishing for clients to make Floyd look even worse.

“There is nothing in the court record today, yesterday that I said or did anything inappropriate,” Floyd argued.

Collins argued that Floyd’s strong credentials should win out, that Floyd and Hefner have both made “mistakes” during their careers.

“I find it cute that when you can’t beat a person on their credentials for the work, then we might sit and Google search to our hearts content,” she said. “I’m sure if I call around in Lafayette — I know lots of people who know Mr. Hefner — I might have had a laundry list to read about Mr. Hefner too.”

Bellue said the board members and their decisions are more important than any demographer selected to help.