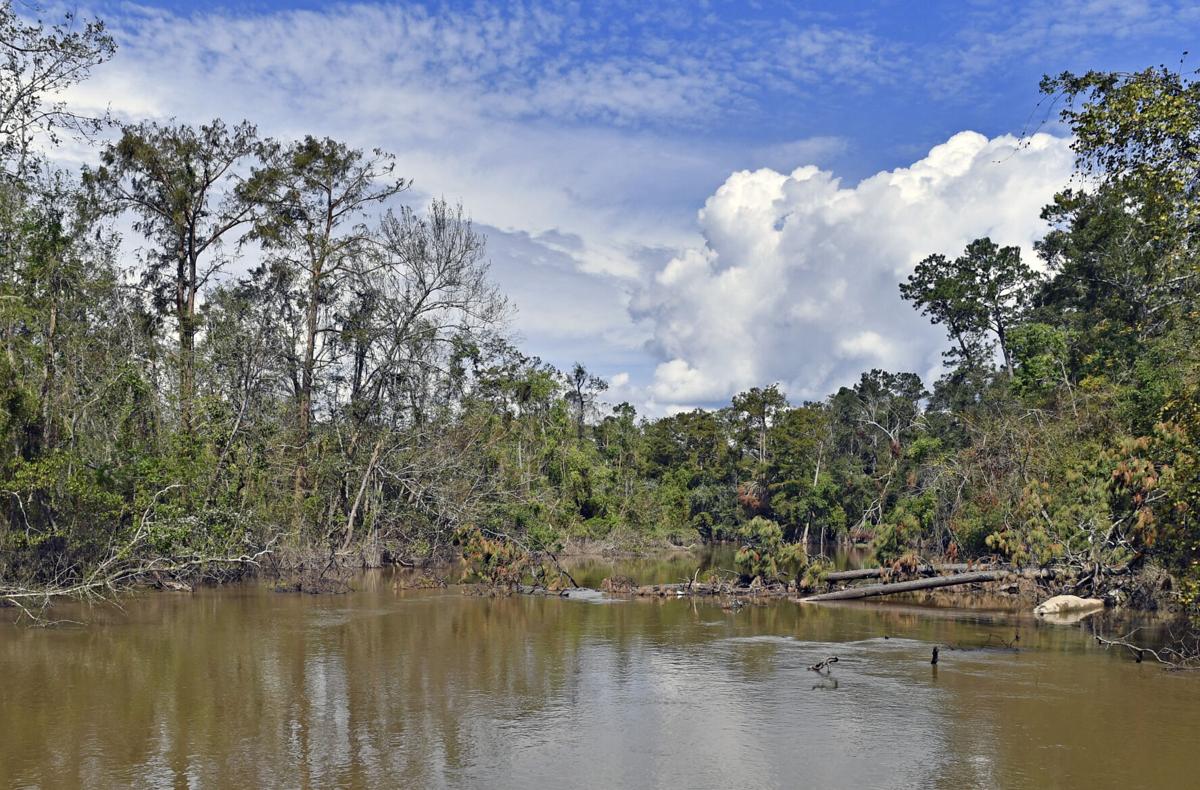 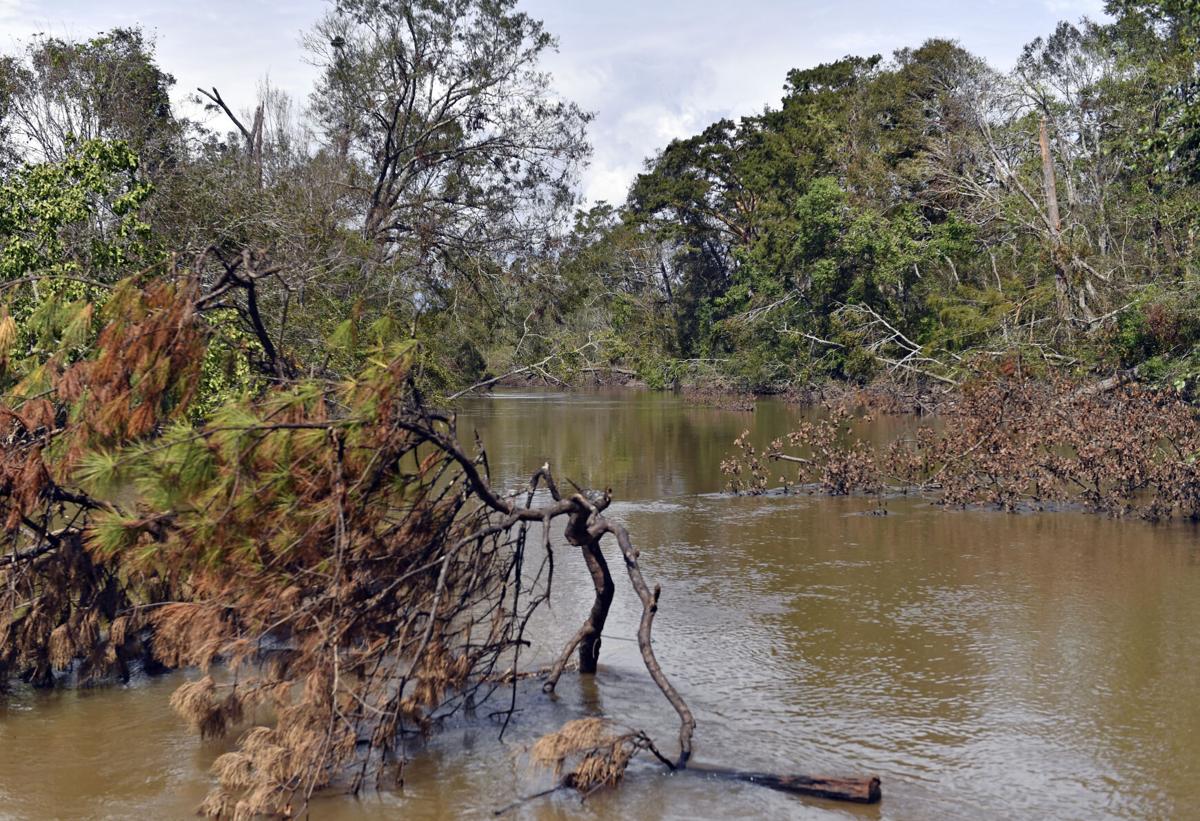 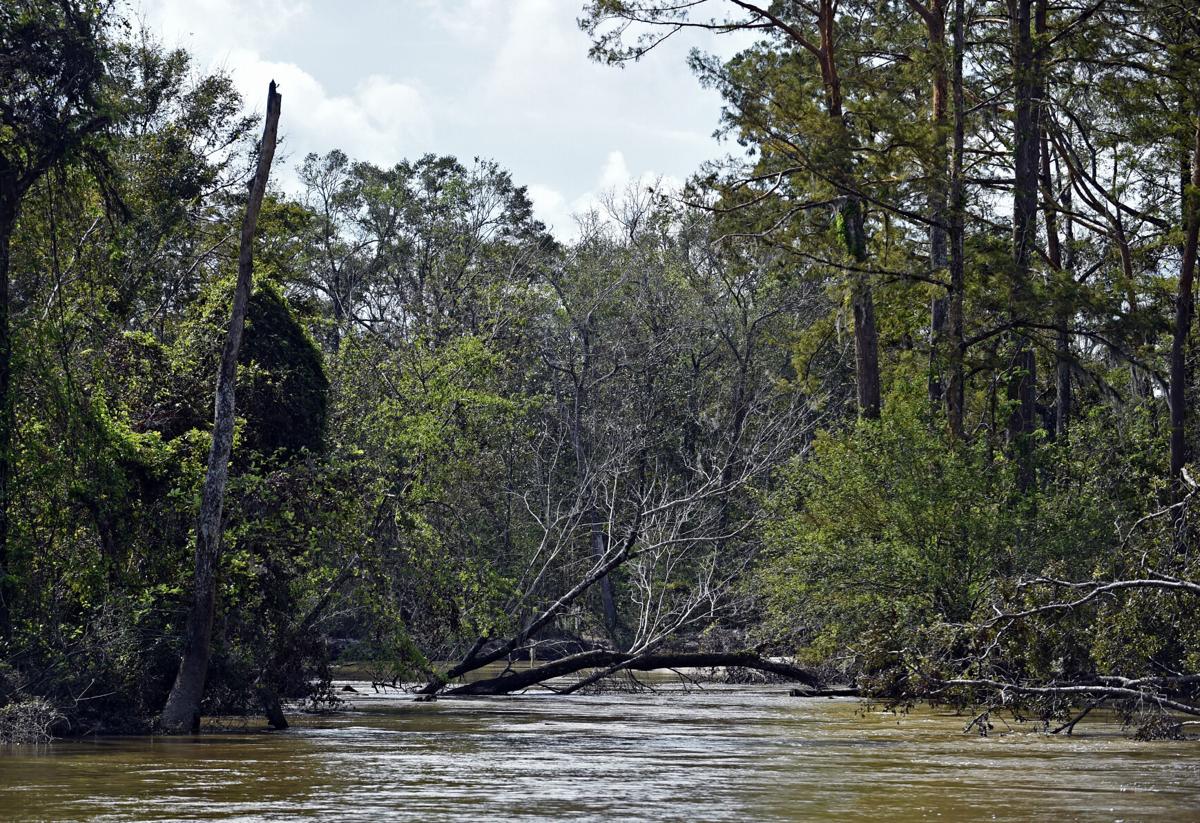 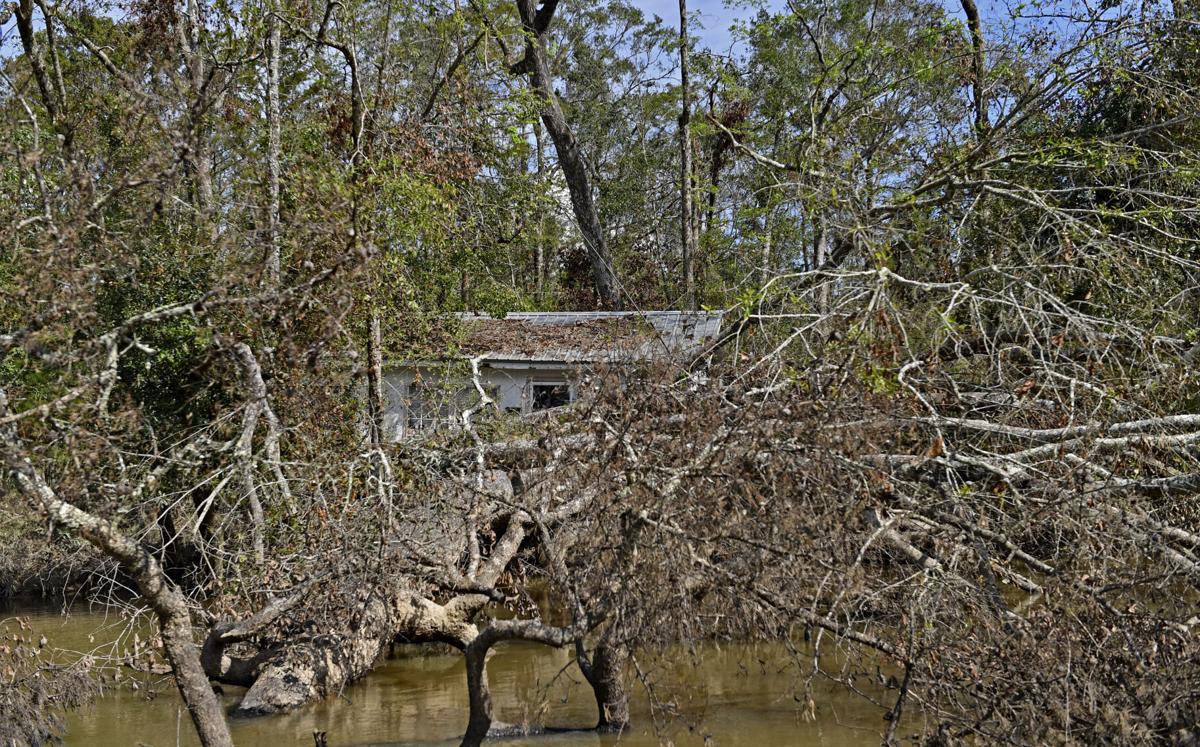 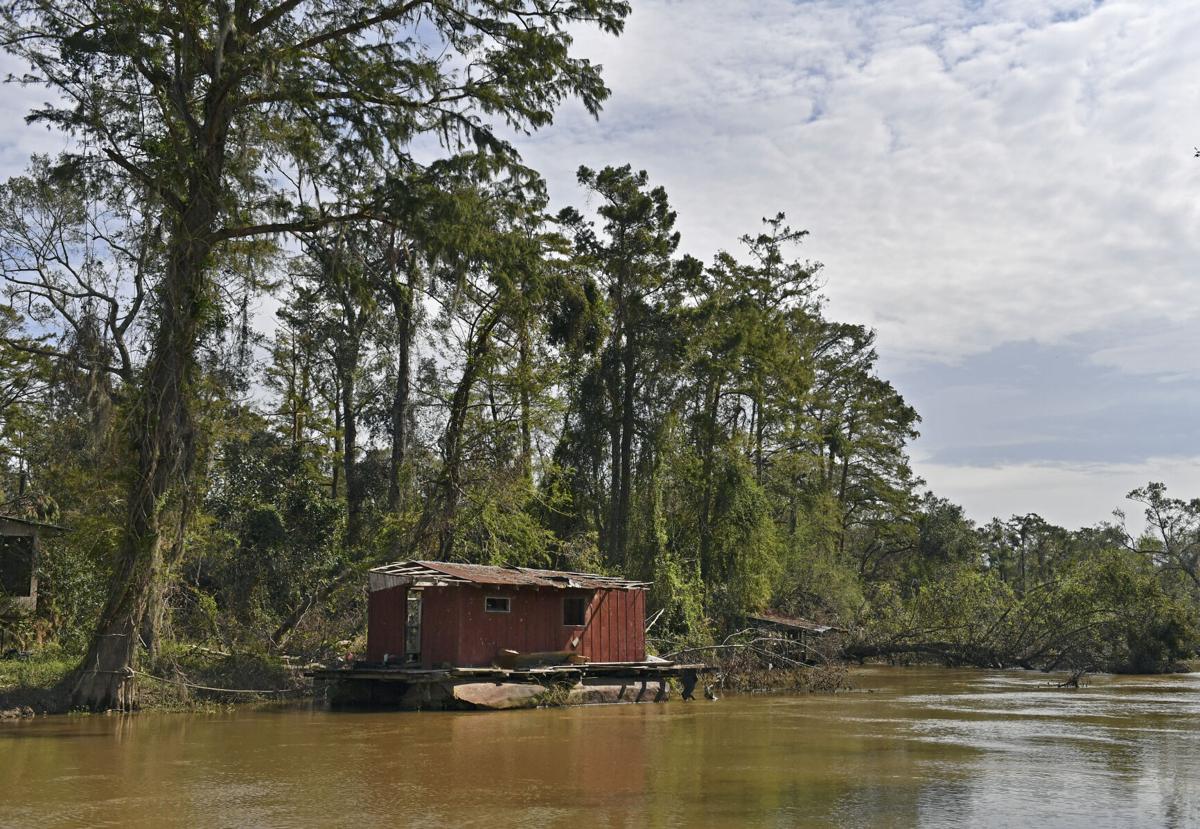 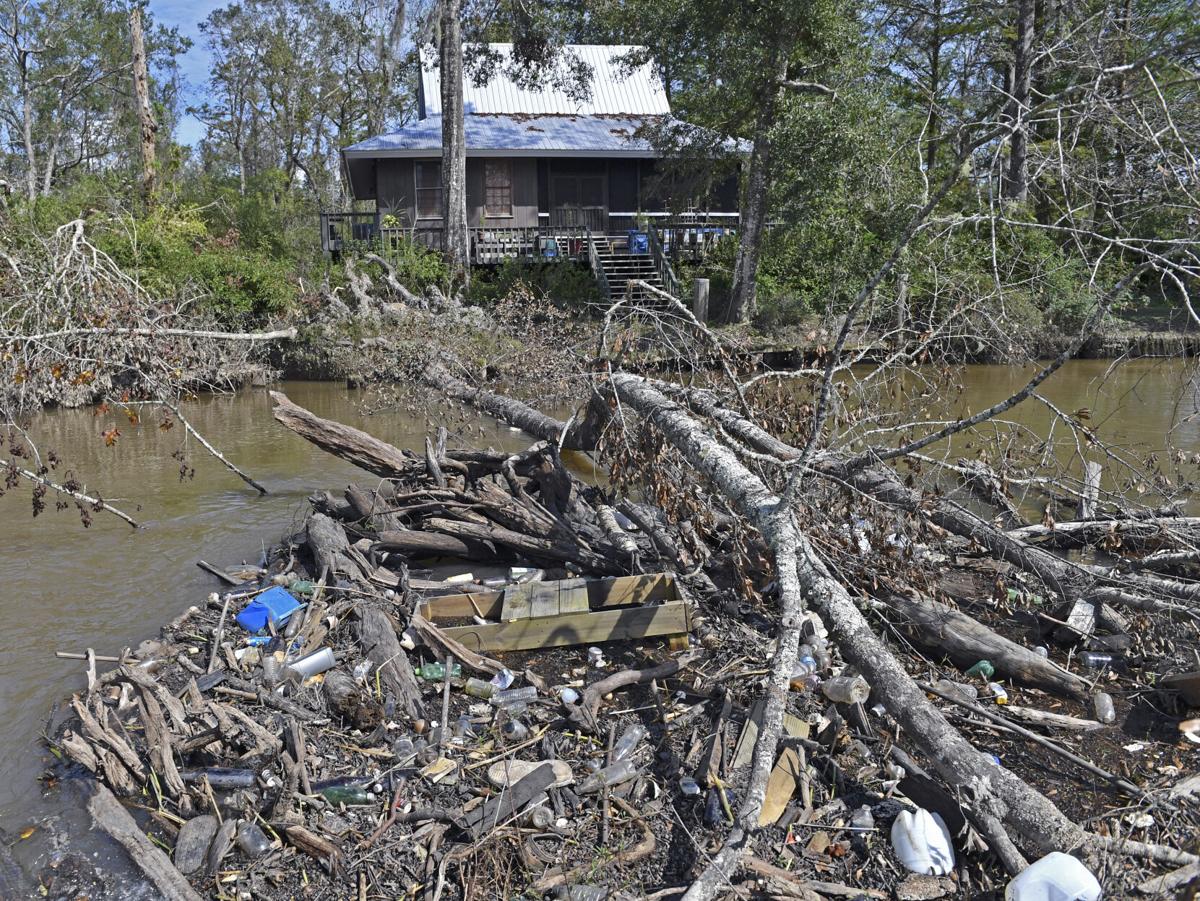 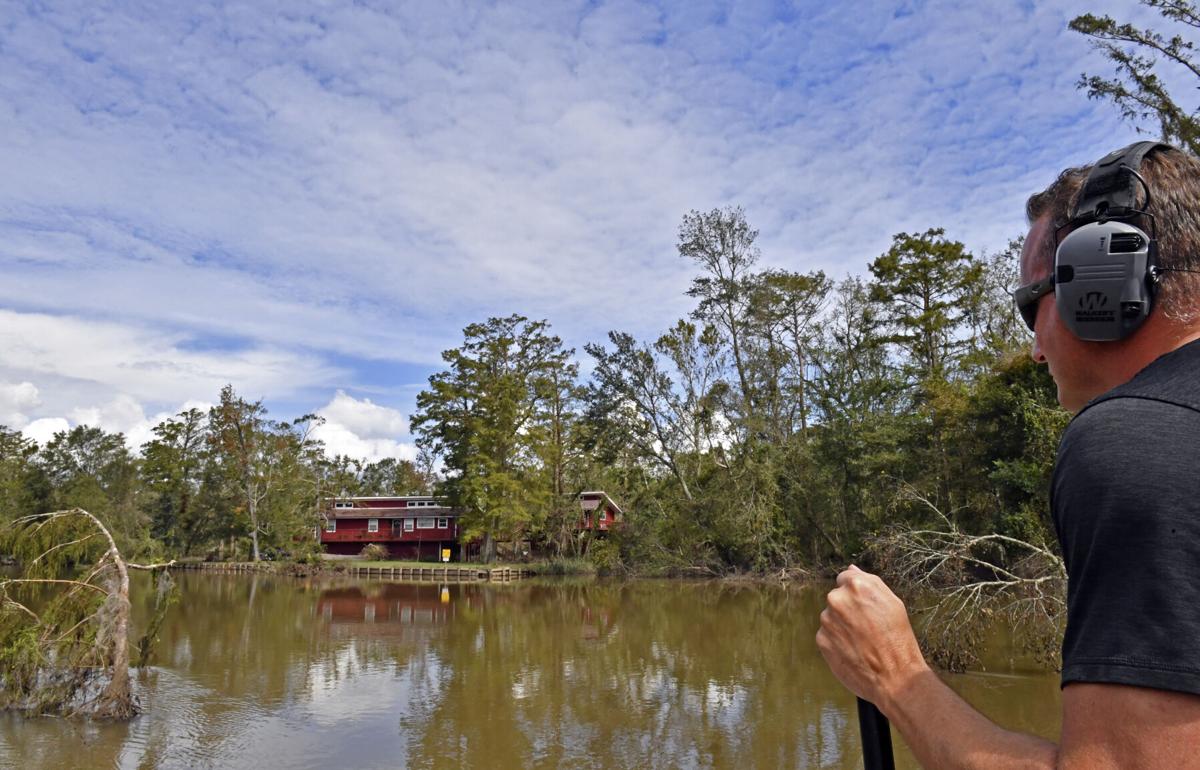 Jason Lipscomb navigates his airboat through debris and fallen trees in the waterway along the Tangipahoa River over a month after Hurricane Ida, Friday, October 1, 2021, in Ponchatoula, La.

Hurricane Ida clogged streams, rivers and bayous with tree branches and other debris, which local leaders worry could make those waterways more dangerous and more likely to flood.

In Tangipahoa Parish alone, officials are counting on $40 million in federal money to clean out waterways. But even with that money, it could could take up to 18 months to do the work, local officials say.

“When I talk to constituents, they say they’ve never seen this much damage,” said Kiley Bates, administrator for the parish’s Consolidated Gravity Drainage District No. 1. The 20-person agency maintains 390 miles of waterways from just north of Hammond down to the shores of lakes Maurepas and Pontchartrain.

The trucks came from as far as Wisconsin and Florida, driven by people who are normally loggers but descended upon Louisiana after Hurricane I…

Ida’s 100-plus mile-per-hour winds shredded acres of pine forest that blankets this rural area east of Baton Rouge. When the storm died down, thousands of splintered trees lay in Tangipahoa’s 500 miles of rivers, streams and bayous, local officials said.

Those heaps of sodden debris illustrate a dilemma local governments face: They could pay contractors tens of millions of dollars to clean the waterways right away, but that puts them at risk of the feds denying a reimbursement. Or they could get federal approval for funding first — but that requires wading through arduous, slow-moving federal bureaucracy, even as hurricane season continues.

It's a tension leaders in bayou-crossed Southeast Louisiana could be confronting more frequently as storms grow more powerful.

After Hurricane Gustav in 2008, a debris-removal contractor sued Livingston Parish for $52 million that the federal government hadn’t agreed to cover up front. It's that sort of situation that makes local leaders hesitant to start paying for cleanup before the feds commit to paying for it.

“It's a Catch-22,” said Bruno Carlo, a 32-year veteran of the Tangipahoa Parish Council and the drainage board. "Do you want to be on the hook for $50 million, or do you want to risk flooding imminently?"

Darrell Domangue remembers the hurricane that ripped apart his home and his livelihood in vivid scenes as if watching a movie.

Just getting approval can be time-consuming. In Tangipahoa and Ascension Parishes, officials are flying aerial drones over hundreds of miles of waterways, gathering footage to prove that Hurricane Ida felled trees clogging those waterways in order to validate federal disaster payments.

Bourgeois lives on the South end of Tangipahoa Parish. Built some 100 yards from the banks of Ponchatoula Creek, her house flooded in Ida — and three other times before, beginning with Hurricane Isaac in 2012.

A lifelong resident of the area that in recent years has seen increased commercial and residential development, which can hinder natural drainage patterns, Bourgeois knows that clogged streams are one of many factors that determine whether waterways overtop their banks or not.

Still, the sight of debris piled high in the creek fills her with worry.

“Let’s say my section of Ponchatoula Creek gets cleared today,” Bourgeois said. “What happens if a tree falls across it tomorrow?”

The speed at which waterways return to normal after a storm hinges on factors like a project's scope, and the choice of agencies through which local governments get funding.

Paul Sawyer, a top aide to Congressman Garret Graves, R-Baton Rouge, explained that the Federal Emergency Management Agency and the Natural Resources Conservation Service work together to dole out funding for waterways debris removal. It's a process akin to how FEMA and the Small Business Administration team up for homeowner recovery efforts.

A month since Hurricane Ida left Tangipahoa Parish reeling, many residents are still picking up the pieces.

While FEMA is the lead agency for clearing waterways, local governments are referred first to NRCS and must wait on a more involved application and task-based authorization process before they can start on debris removal cleared for federal reimbursement.

Chad Kacir, Louisiana state conservationist for NRCS, said the process through the Emergency Watershed Protection program involves more detailed documentation and verification of waterway debris and includes the need for an economic justification for the work.

"We have a longer process to go through than just reimbursement," Kacir said.

But if local governments are denied or NRCS doesn't have funding immediately available — which was the case until lawmakers approved stopgap congressional funding last week — NRCS sends local governments back to FEMA for emergency debris removal assistance.

"Whereas with FEMA, through the Public Assistance program, you can do the work and then request reimbursement," said Ben Malbrough, director of Bayou Lafourche Fresh Water District.

Located south of Tangipahoa and west of the Mississippi River, Bayou Lafourche is a key drainage route and source of drinking water for Ascension, Assumption and the lower bayou parishes that took the brunt of Ida, officials said.

The district operates pumps in Donaldsonville that siphon Mississippi River water into the bayou, and does maintenance along the more than 100-mile waterway to the Gulf of Mexico.

Ida's winds sent an estimated 60,000 cubic yards of trees down into the bayou.

Sawyer, Graves' aide, said some parishes and other entities, like the fresh water district, had been hustling shortly after Ida to have NRCS turn them down and send them back to FEMA so they could start work and take advantage of a full reimbursement through Oct. 10. It drops to 90% afterward.

By mid-September, after NRCS told it there wasn't yet funding for debris removal, the fresh water district went back to FEMA and got a tree removal contract to DRC Emergency Services, Malbrough said.

A firm that holds a lot of land debris contracts in south Louisiana, DRC has been working for about two weeks to remove some of the estimated 500 trees downed between Lockport and Donaldsonville.

"We think we can get probably half of the work done before the 10th, hopefully," Malbrough said.

The estimated cost is around $3 million.

Up north in Tangipahoa, Gravity Drainage District #1’s hundreds of miles of channels render that Oct. 10 target end-date out of the question, said Bruno, the parish councilman and drainage board member.

“The smaller the scope of the project, the easier it is to get the contracts,” he said. “The scope and the magnitude of what we got usually takes a little longer.”

Ascension president terminated from drainage panel after months of negotiations

Since the East Ascension drainage panel voted to remove the parish president as head of drainage this summer, a clutch of council members and …

The board plans to apply for funding through both NRCS and FEMA. Once acquired, the money will pay to clear district’s 400 miles of waterways in three chunks.

Under a contract the drainage board awarded before Ida, workers from a Gonzales-based company called Chem Spray South are already at work unclogging 56 miles of waterways. The process usually involves chipping broken trees where they’ve fallen or using machinery to yank them from the water and dump the limbs at publicly-accessible drop-off piles, said Bates, the drainage administrator.

The second series of waterways — 135 miles of main channels, including Ponchatoula Creek, where Melissa Bourgeois lives — is under drone surveillance now and will be first up for assistance contracts from one of the two federal sources. Last will come 200 miles of tributaries, according to Bates.

An estimated 37 felled trees per mile lie in the drainage district’s waterways after Hurricane Ida. That almost doubles FEMA’s “severe damage” standard of 20 trees per mile, outpacing anything local officials can remember.

“After Katrina, the amount of trees we had down in our drainage laterals was probably a third of what we had in this storm,” Bruno said.

And not everyone near a waterway can rely on a public body to clear it after a storm, Bruno emphasized. For instance, areas east of the Tangipahoa River — itself a scenic waterway that often floods, where residents need Department of Wildlife and Fisheries permits to remove felled trees — have no drainage district to direct post-storm projects.

In Ascension, the Parish Council agreed in mid-September to spend $444,500 on engineering consultants to fly drones over more than 300 miles of waterways.

Officials with All South Consulting hoped to have that work done in three weeks, while in-house parish crews have since started working in parallel with the assessment to remove trees.

After Hurricane Laura tore through Lake Charles, John Ieyoub knew his home wasn’t livable. Rain had poured in through holes in the roof, satur…

By Sept. 20, parish workers had removed about 140 trees from waterways.

"That's what most of the drainage staff is doing, is getting everything open to flow, as much as we can," Ron Savoy, Ascension director of public works, told parish council members sitting on a key drainage panel. "And paralleling the efforts of the assessment at the same time."

The mechanics of government, however, often operate on a different clock than do residents worried about the next storm.

As the Parish Council had worked on the nearly $445,000 contract with All South Consulting and ELOS Environmental just to identify debris, Teri Casso, the council chairwoman, underlined that point, asking the consulting firms for timelines laying out when trees would be removed.

"So we can tell our constituents, who call regularly (about downed trees) — 'It's still there. It's still there' — when it's going to be gone," she said.

Once more to the pumps: Ascension eyes new pump station to cut down Manchac flooding

For years, as East Baton Rouge has sprawled south and Ascension and Iberville parishes have reached north, people have searched for ways to un…

After Hurricane Katrina, RV dealers in Louisiana were incensed when the family of then-state Rep. Gary Smith Jr. landed a lucrative contract w…