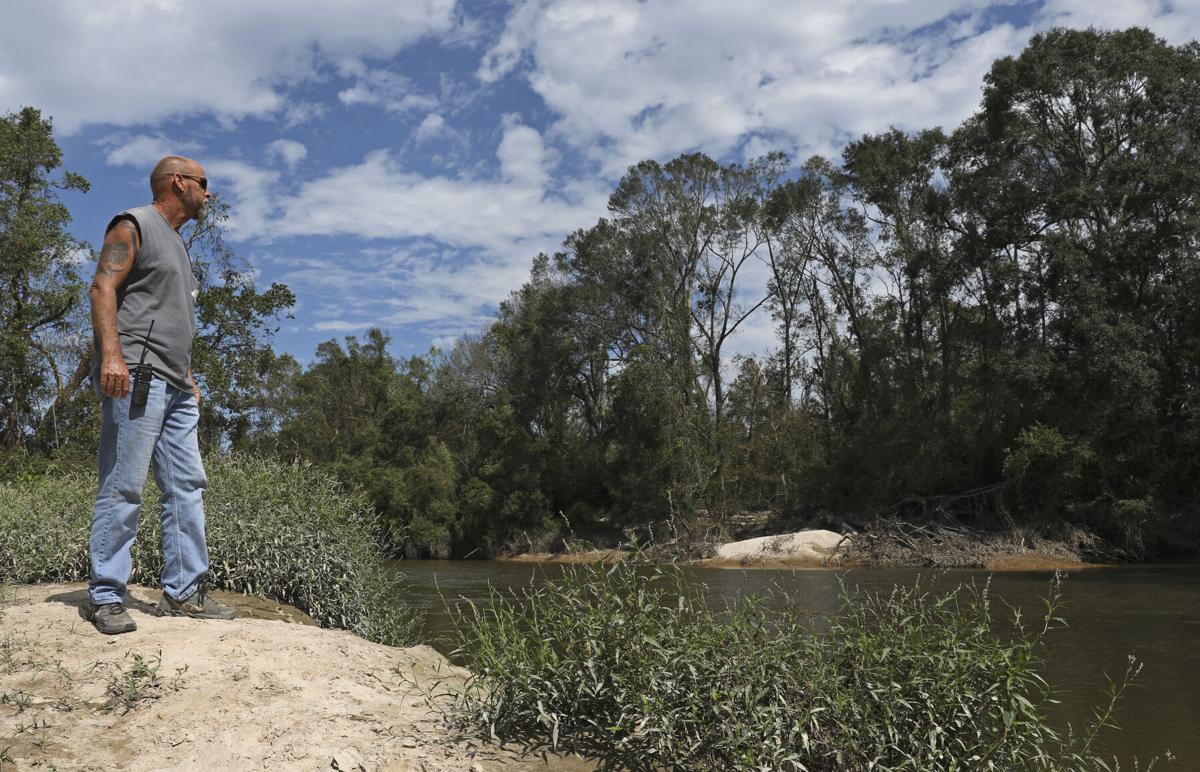 Scott Poston looks at downed trees and a new sandbar along the banks of the Tangipahoa River at Hidden Oaks Campground in Hammond, La., on Monday, October 11, 2021. Poston, the owner of Hidden Oaks Campground, said the island is an example of erosion and the build-up of debris along the river banks that have filled up the river basin increasing the severity and frequency of flooding of the Tangipahoa River. 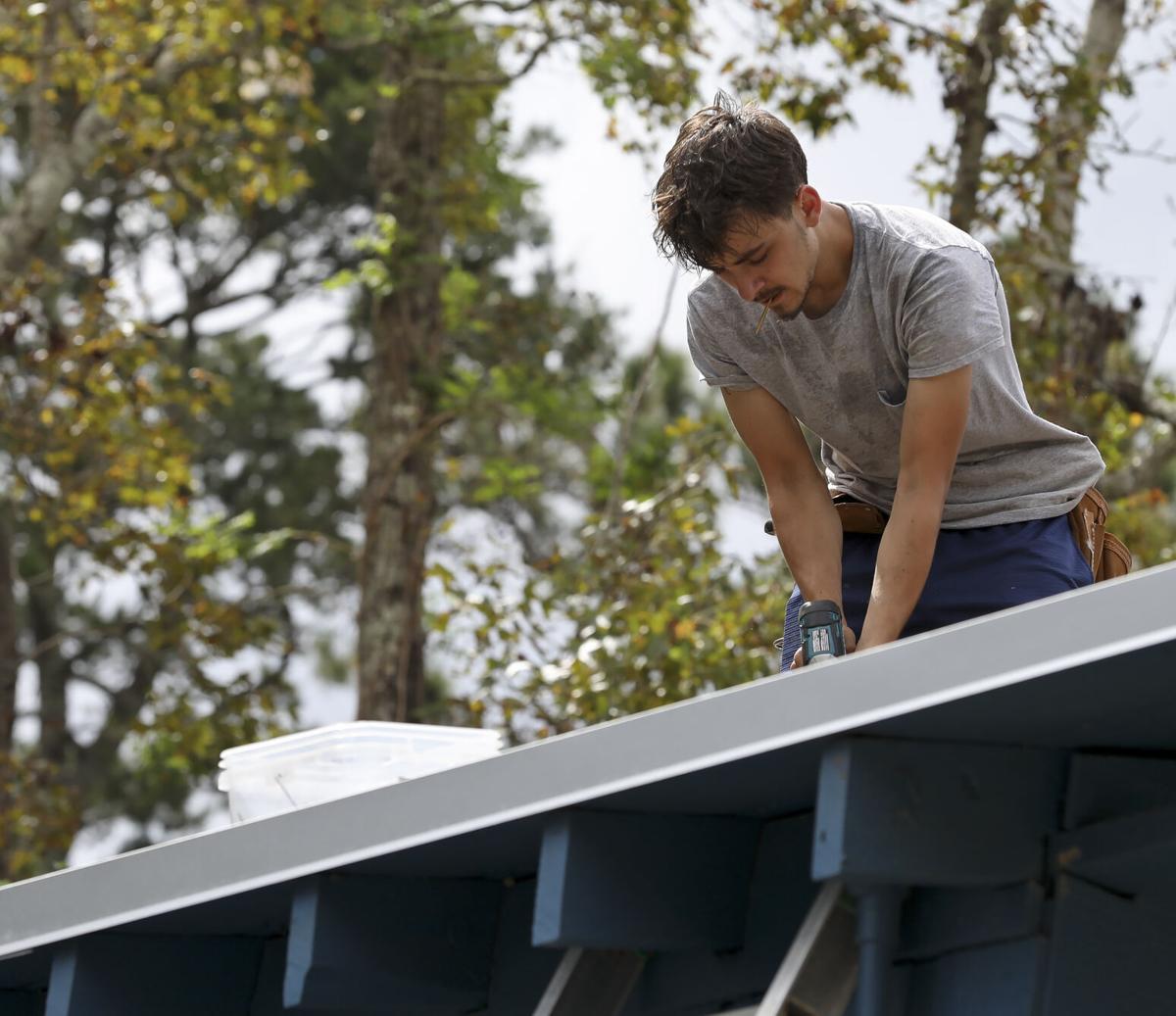 Kody Pitre nails a piece of roofing to a cabin at Hidden Oaks Campground to repair damage sustained during Hurricane Ida in Hammond, La., on Monday, October 11, 2021. 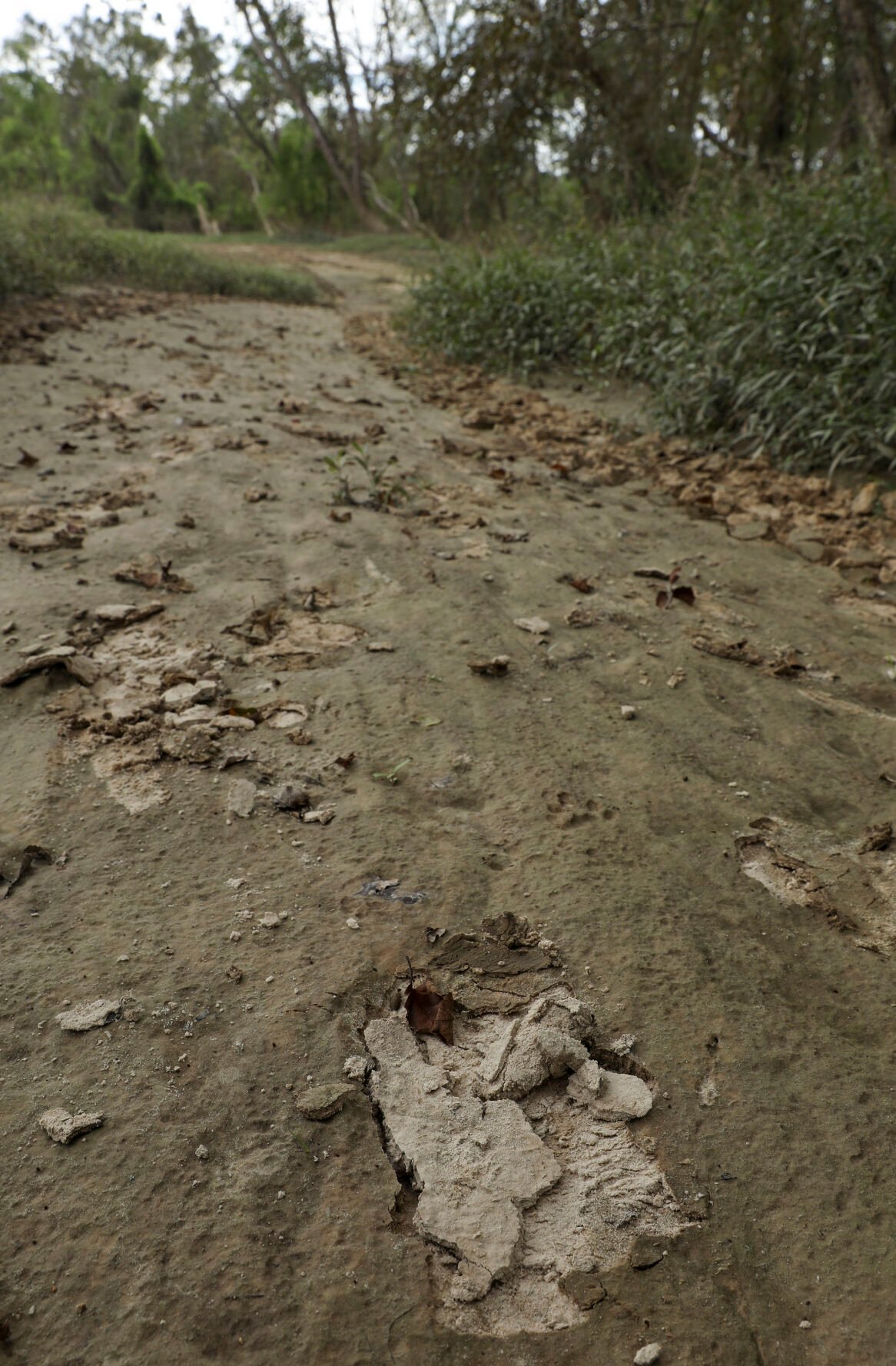 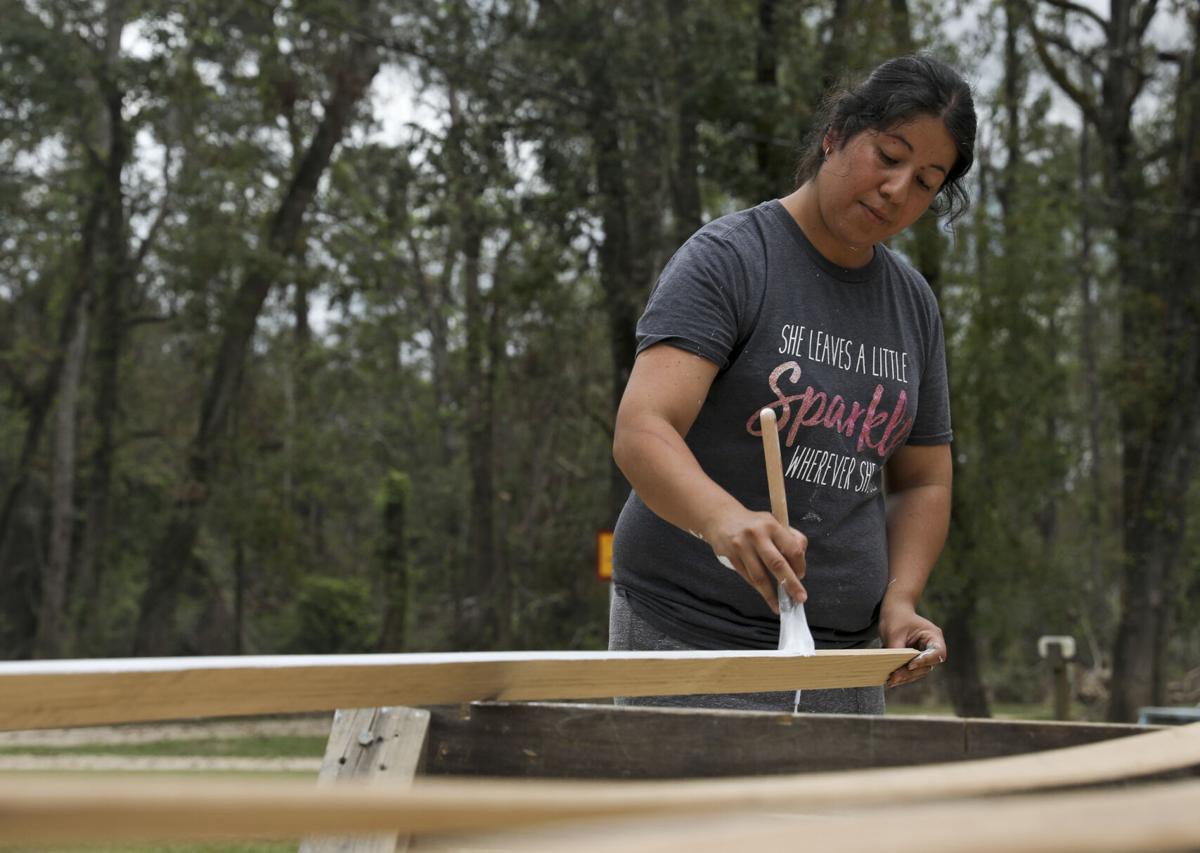 Maricruz Reyes paints a section of trim white during the clean-up of Hidden Oaks Campground after flood damage sustained during Hurricane Ida in Hammond, La., on Monday, October 11, 2021. 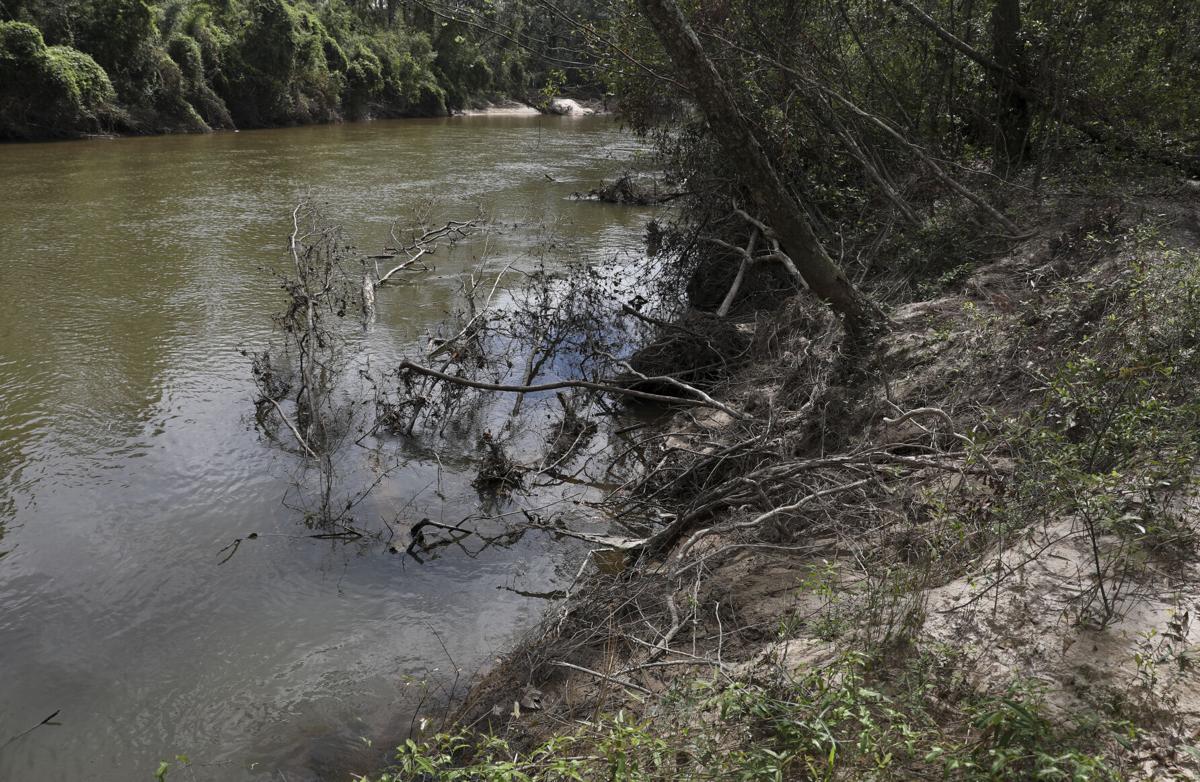 A crew works to repair a roof of a cabin during the clean-up of Hidden Oaks Campground after flood damage sustained during Hurricane Ida in Hammond, La., on Monday, October 11, 2021. 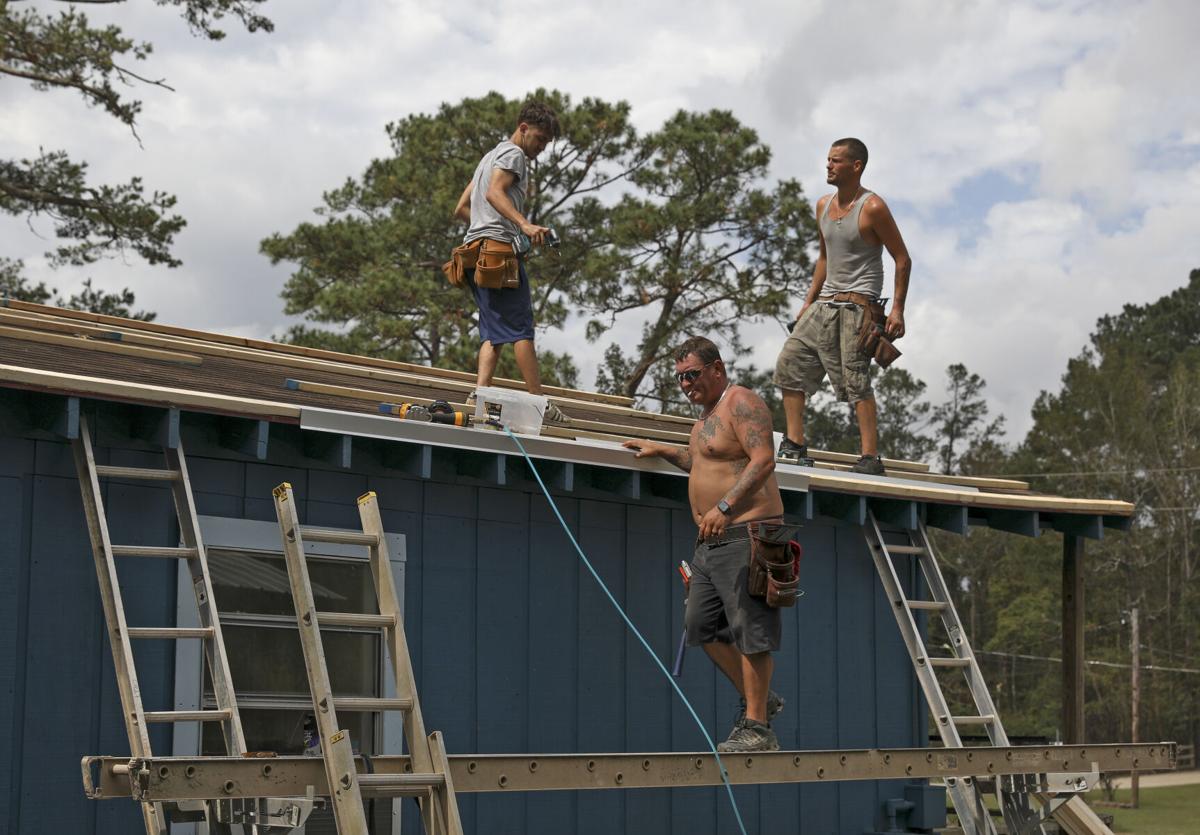 Chris Pitre (lower walking on the ladder) directs his son, Kody Pitre (left on roof), on how to fix the roof of a cabin during the clean-up of Hidden Oaks Campground after damage sustained during Hurricane Ida in Hammond, La., on Monday, October 11, 2021. 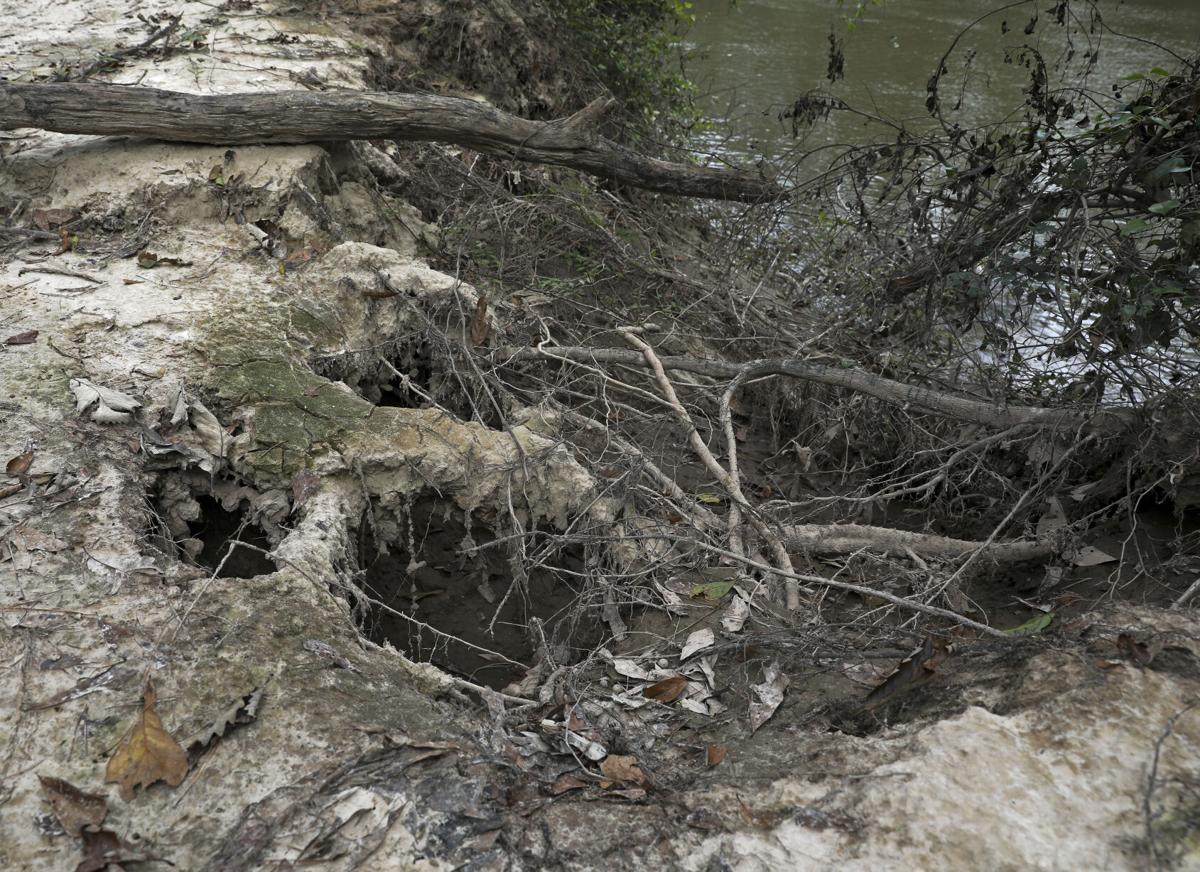 Roots of trees along the Tangipahoa River are revealed after flooding from Hurricane Ida and other rain events eroded away soil along the banks of the river at Hidden Oaks Campground in Hammond, La., on Monday, October 11, 2021. 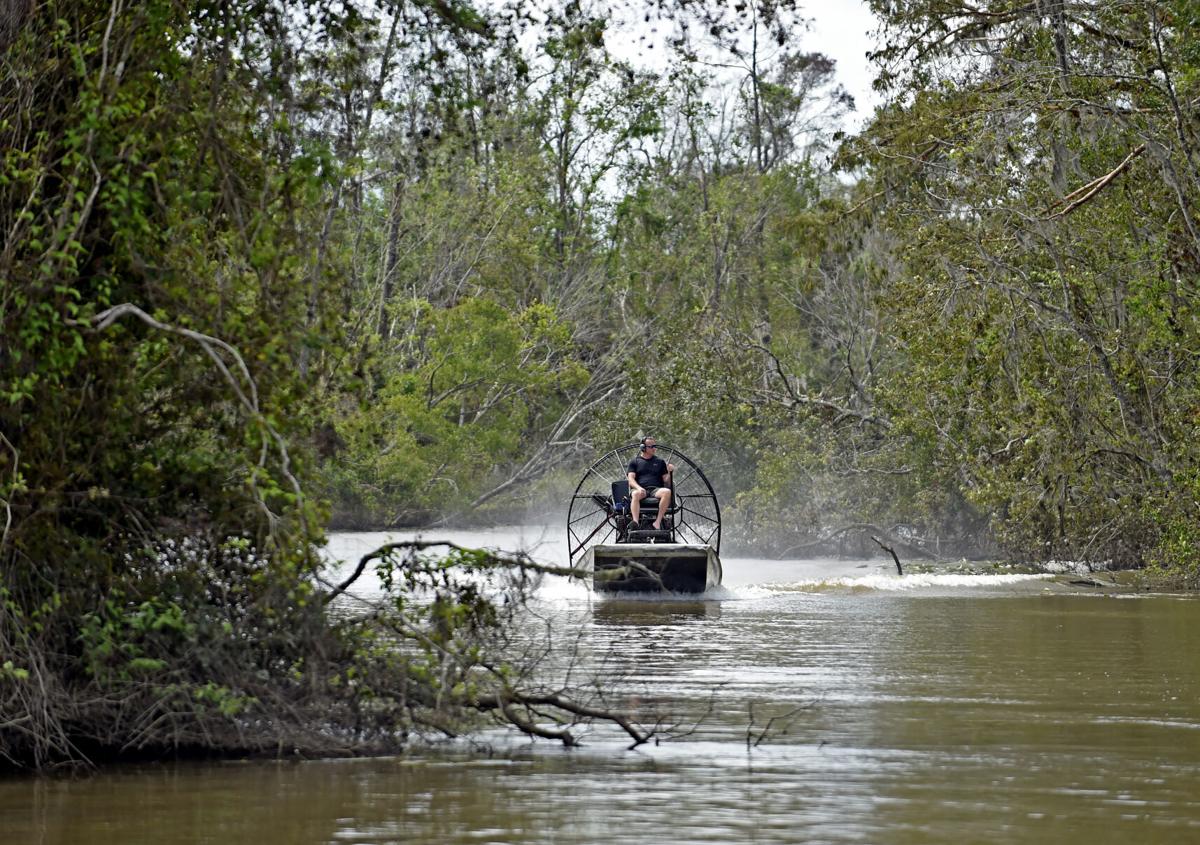 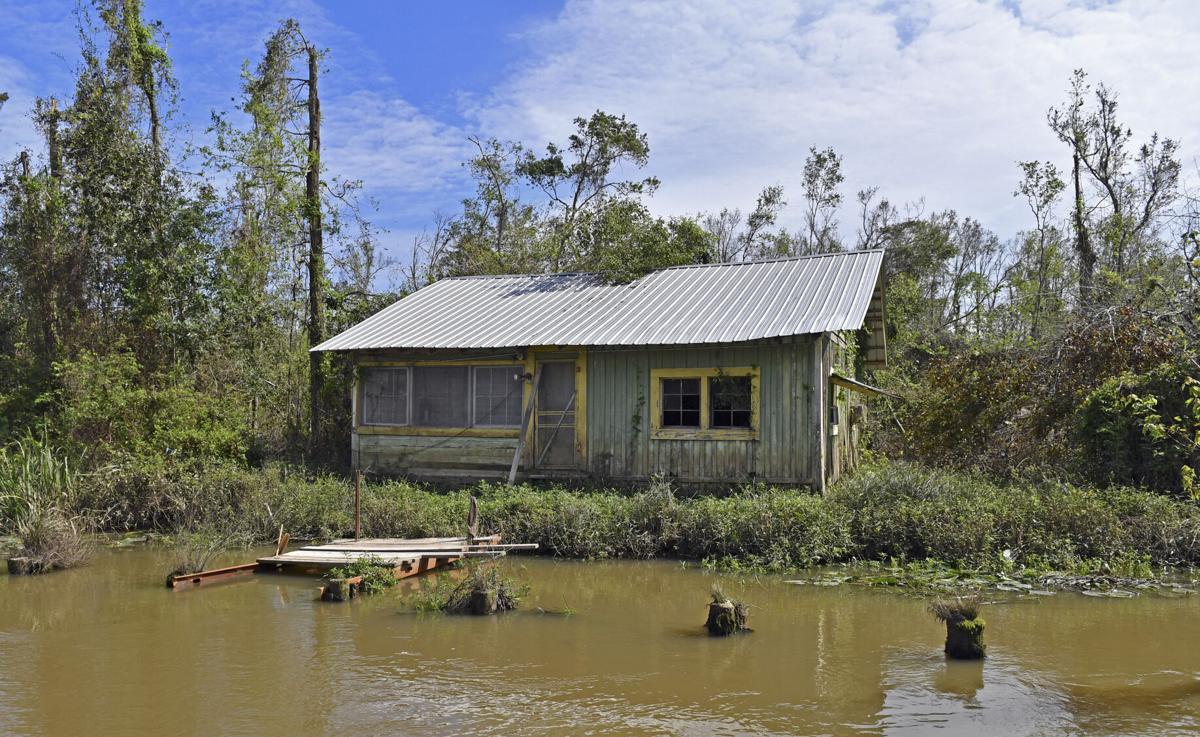 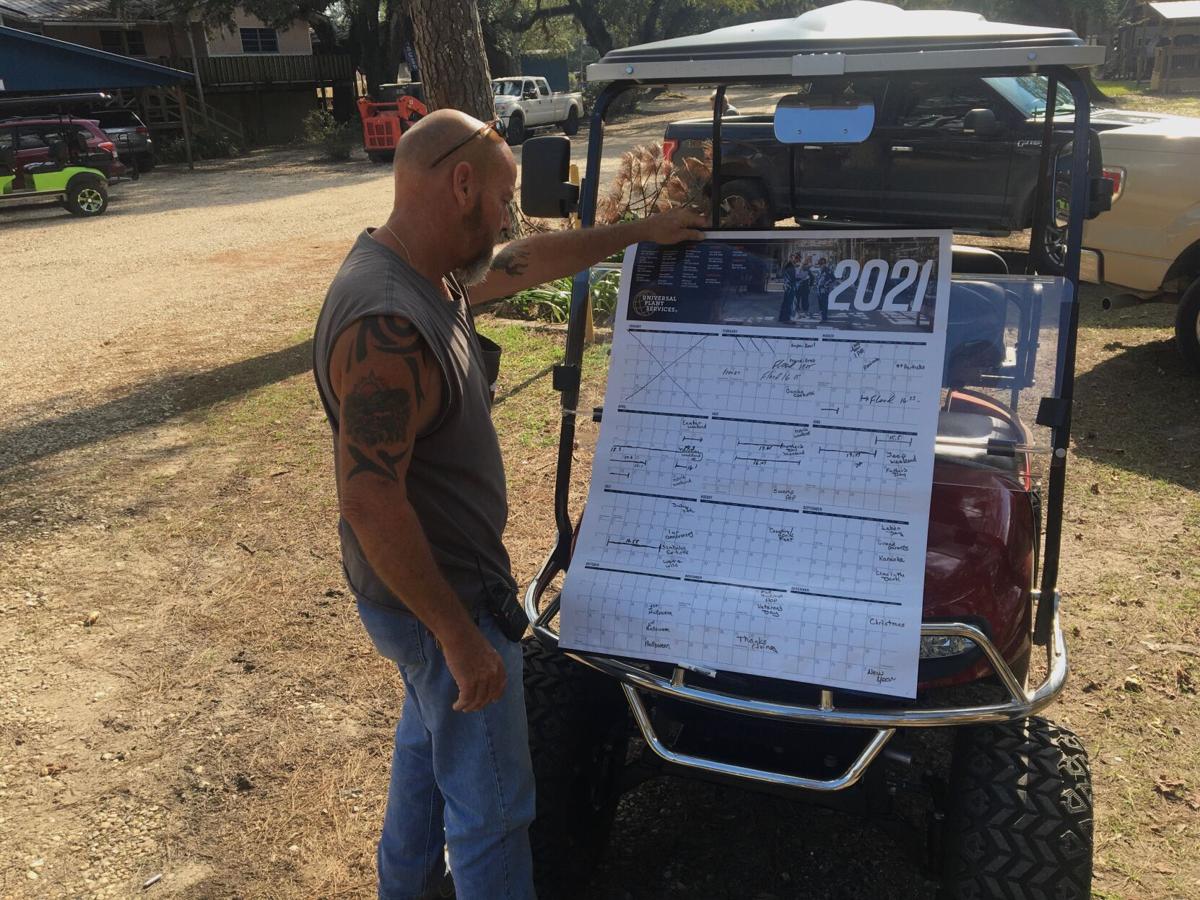 Scott Poston looks over a calendar logging 18 separate flood events in 2021 at Camp Hidden Oaks on the Tangipahoa River on Friday, Oct. 7, 2021 in Robert, La.

When Scott and Arlene Poston bought Hidden Oaks Campground as a retirement project last summer, it was a foregone conclusion that their new home would probably flood once or twice a year.

The Postons had spent years’ worth of long weekends among the campground’s towering oaks and willows, so they knew the risk. It’s normal for the Tangipahoa River — which snakes all around the 150-plot, 76-acre property — to jump its banks a couple times during Louisiana’s rainy season and send water churning through campsites, cabins and trailers.

Even so, the couple loves the outdoors, and considered the shady campground east of Hammond a place of refuge. So when they bought it in July 2020, the prospect of a flood or two a year seemed an easy trade-off.

But their first full year maintaining the campground has tested the Postons in ways they never expected.

Heavy rainfall overtopped the riverbanks twice this past February, inundating with several feet of water the campground that 17 people call their full-time home. It happened again — twice — in March. May brought two more floods. By the time Hurricane Ida blew in from the Gulf of Mexico on Aug. 29, the river had poured onto the property 15 times since the start of the year.

The morning after the Category 4 storm made landfall — the most powerful hurricane to strike Louisiana since the 1850s — the couple woke up at 4 a.m. to watch the coffee-brown river rise again.

It would eventually build up enough to lap at the Postons’ porch, which is raised some 10 feet off the ground. Other houses, trailers and camp sites were submerged completely. When Scott Poston tried walking around the grounds, the water came up to his chest.

“We know we’re on the river, and it’s going to flood, and we understand we’ve had a record year of rain,” he said, while taking a rest from hacking apart fallen trees one recent Friday afternoon. “But this river is clogged up.”

A matter of course

Flooding is part of life in this pine-forested, bayou-laden swath of South Louisiana, and people know that building near waterways is a gamble. But along the Tangipahoa River — whose status as a scenic waterway shields it from dredging and other flood-prevention work — residents like the Postons say a problem years in the making has reached a tipping point.

As Tangipahoa Parish officials roll out a plan to remove brush felled by Hurricane Ida from other parish-maintained waterways, years of frustration with the scenic river designation have sharpened among riverside residents. More than ever, locals want the waterway cleared of brush and deepened to prevent flooding — steps prohibited by the state law.

Hurricane Ida shows how FEMA, other bureaucracy can slow down waterway clean-up after storms

Hurricane Ida clogged streams, rivers and bayous with tree branches and other debris, which local leaders worry could make those waterways mor…

While some local officials agree on a need to remove trees and debris, they note that flooding happens for a complex mix of reasons for which there are few easy fixes.

Heavy rainfall that carves away the riverbanks and broadens its bed, and persistent development that quickens water runoff, tend to worsen flooding — as does the brush that tangles and dams the riverine flow, local officials say.

It’s a problem six or seven years in the making, said Carlo Bruno, a 32-year veteran of the Tangipahoa Parish Council and a board tasked to manage local waterways.

A deal has been reached between leaders in East Baton Rouge and Iberville parishes in regards to flood mitigation work along Bayou Manchac.

The Tangipahoa River runs for 122 miles from McComb, Mississippi, to Lake Pontchartrain’s northern shore. Its waters are regulated by the Louisiana Department of Wildlife and Fisheries under the state's Scenic Rivers Program, which preserves 3,000 miles of waterways in Louisiana in free-flowing condition so they can be protected for future generations to enjoy.

Effectively, that means none of the Tangipahoa River can be dredged or altered.

Residents who want to remove brush from sections of the river near their homes need a permit, and then may only remove 50% of debris in the area covered by the waiver. The parish may also obtain permits to do larger scale dredging in certain cases.

The Tangipahoa River has been at flood stage for the past five or six years, said Chris Davis, Scenic Rivers Program enforcer for the Department of Wildlife and Fisheries. When it comes to resident comments to the department about flooding, Davis said, “this year’s probably been the most comments we’ve gotten.”

They pitched Louisiana’s Washington, D.C. congressional delegation in August on legislation that would temporarily lift the scenic river designation to allow dredging, Bruno said. At the same time, LDWF officials surveyed the waterways to gauge the extent of debris pileup — the first step in obtaining a permit needed to contract out large-scale dredging.

But those processes are time-consuming. They stalled when Hurricane Ida hit, and there are no plans to restart them.

“It takes upwards of 18 months for the parish to get a permit to get the river clear,”  Bruno said. “When that’s done, all that money could be spent clearing canals instead of doing paperwork.”

Jason Lipscomb, a local real estate agent who owns a camp near Ponchatoula on the riverbank that has flooded in the past, would like to see the river returned to the authority of Tangipahoa Parish’s Gravity Drainage District No. 1 — an agency he hopes would take the initiative to dredge and deepen the river.

Runoff and debris pileup in the water made sections of the river near his camp go from eight feet to three feet deep in recent years, he estimated.

“If they were to dredge it and make it 12 feet deep and 12 feet wide, that would eliminate a lot of the pain we’re going through,” he said.

Ascension president terminated from drainage panel after months of negotiations

Since the East Ascension drainage panel voted to remove the parish president as head of drainage this summer, a clutch of council members and …

But altering the course of a fragile river involves many moving parts, and experts say any course of action can have a potentially damaging ripple effect.

Speaking in August about a debate over whether to dredge the nearby Amite River, which runs west of the Tangipahoa through Livingston Parish, hydrologist Bob Jacobsen described that river as already being so altered that any new action could further destabilize the channel.

“We can’t oversimplify something and just convince ourselves, no matter how romantically we are attached to getting rid of flooding or restoring the environment to what it was 100 years ago,” Jacobsen said. “The reality is very complicated. Things have unintended consequences.”

Residents in the area, however, felt like Hurricane Ida was an object lesson about what happens when nothing is done.

The storm’s 100-plus mile-per-hour winds shredded this pine-forested section of the I-55 corridor, leaving thousands of newly-splintered trees protruding from the water and clogging it even more.

At Hidden Oaks Campground, the water took a few days to recede after Ida flooded the area.

But the Tangipahoa River overtopped its banks when Tropical Storm Nicholas brought heavy rain through the Baton Rouge region 10 days later, inundating the camp yet again.

Another small rainstorm two weeks after that flooded the camp for the 18th time since January.

For the Postons and their guests — a mix of year-round residents, long-weekend regulars and passing visitors — the cost has been steep.

Thirty-four RVs at the campground couldn’t be saved after Ida. Water poured into the camp’s store, and silt from the river buried walking trails around the campground. To save their four goats, the couple had to keep the animals on their back porch until the water receded several days after the storm.

“We ain’t going nowhere,” said Arlene Poston. “It’s just a pain in the butt every time the river comes up, when we know something can be done about it.”

In a year of heavier-than-normal rainfall, the couple aren’t alone. During Hurricane Ida, some places in Tangipahoa Parish flooded that didn’t take on any water during the catastrophic floods that hit the region in 2016.

In the case of the Tangipahoa River, Bruno believes the detriments of the scenic river designation outweigh the benefits. At the same time, he said, record-setting rains are making flood prevention more challenging than ever.

“When you get 16 or 20 inches of rain in six or eight hours,” Bruno said, “there’s no drainage system in the world that’s going to be able to handle that amount of water.”

Sewage has spilled out of this Baton Rouge treatment plant 5 times this year, records show