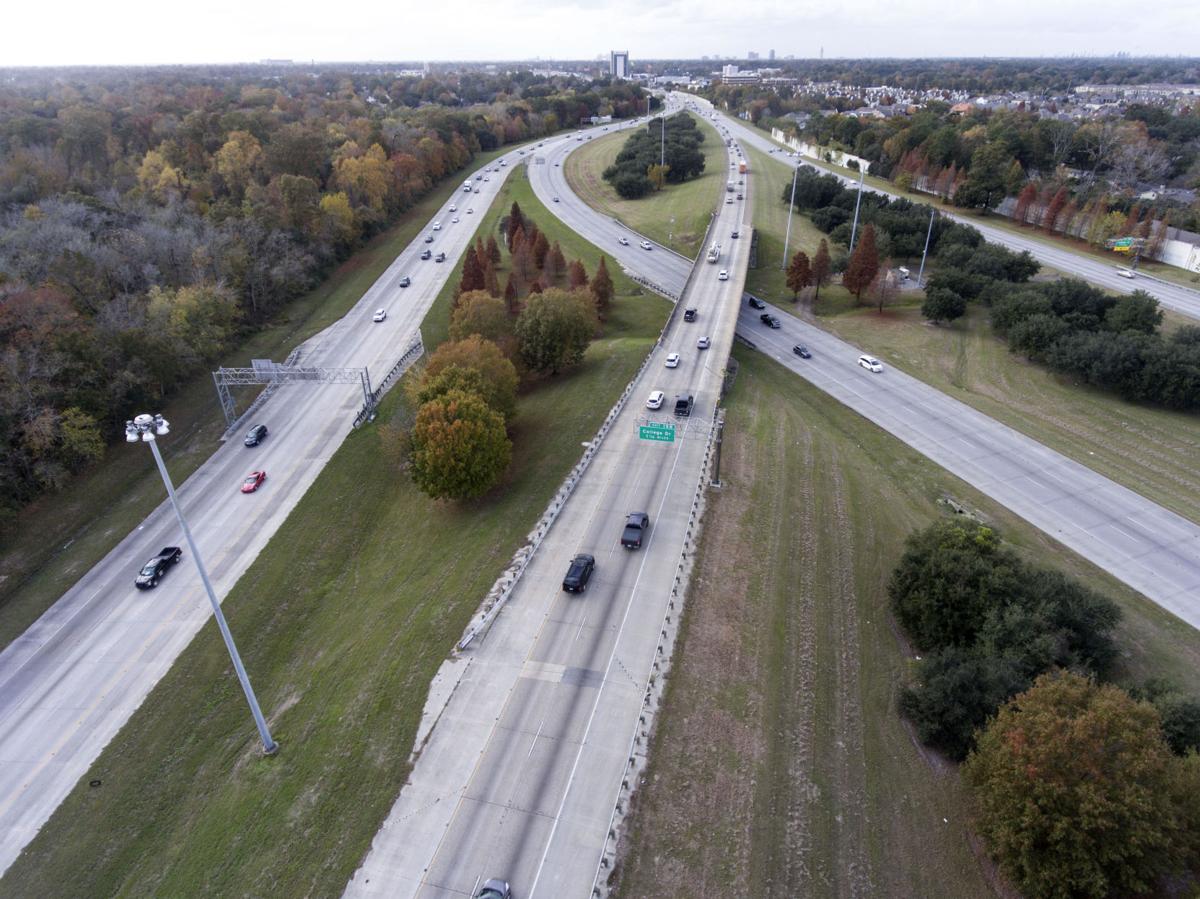 State officials say a "few" trees at the split will have to be removed and replanted in connection with the $380 million expansion of Interstate 10 between the split and La. Hwy. 415. Also, some trees along I-10 westbound hovering over sound walls will be removed or trimmed as part of the College Drive flyover that will make it easier to reach College from I-10 and I-12. 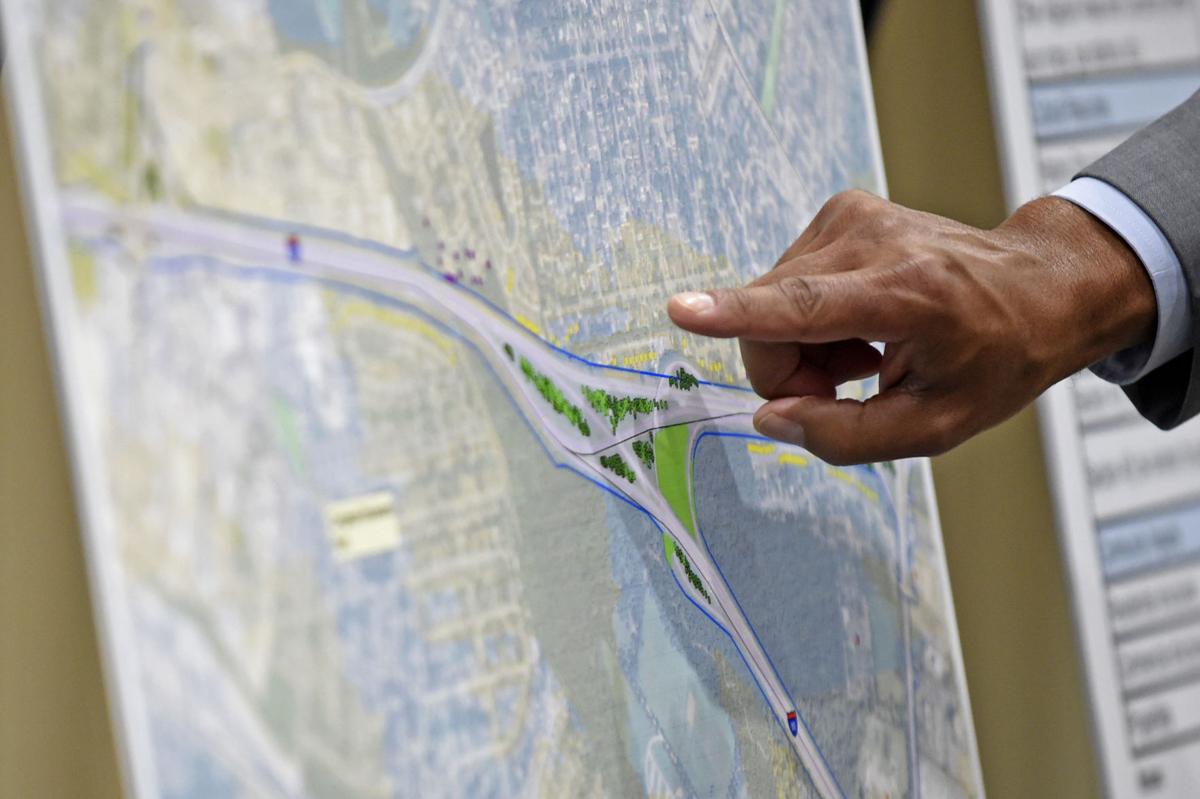 Perry Franklin points to areas of interest on the proposed College Drive flover during a meeting to discuss the Interstate 10 expansion, Tuesday, November 19, 2019, at the West Baton Rouge Conference Center in Port Allen, La.

State officials say a "few" trees at the split will have to be removed and replanted in connection with the $380 million expansion of Interstate 10 between the split and La. Hwy. 415. Also, some trees along I-10 westbound hovering over sound walls will be removed or trimmed as part of the College Drive flyover that will make it easier to reach College from I-10 and I-12.

Perry Franklin points to areas of interest on the proposed College Drive flover during a meeting to discuss the Interstate 10 expansion, Tuesday, November 19, 2019, at the West Baton Rouge Conference Center in Port Allen, La.

Aside from what the $380 million expansion of Interstate 10 in Baton Rouge will mean for traffic, homes and construction delays, another issue is triggering worries: What happens to all the trees in the way of the work?

The issue has sparked a huge outpouring to officials of the state Department of Transportation and Development, including from Baton Rouge Green, whose members have planted and maintained more than 4,300 trees at 24 sites along area roadways.

"Because we can tell you that there are hundreds of trees that are going to have to be removed that are under our care," Foley said. "But we are not fighting that and we do not stand in the way of needed infrastructure improvements in the area."

The long-discussed project will add a new lane in each direction from La. 415 to the I-10/12 split, rework on- and off-ramps at Perkins Road and elsewhere and erect a new bridge across the City Park lakes.

I-10 expansion in Baton Rouge will affect 28 homes and 5 businesses, officials say

It is aimed at easing daily congestion on a corridor that handles up to 160,000 cars and trucks per day — double the intended capacity.

Exactly how many trees will be affected is unclear. But about 200 are in the area where a flyover will be built to allow motorists on westbound I-10 to exit at College Drive — one of the first projects of the decadelong overhaul.

Taxpayers get first look at $30M College Drive flyover on I-10 in Baton Rouge; see details

Foley said she does not expect that all of 200 trees in the area will have to be removed.

Both sides also say officials of Baton Rouge Green and DOTD have a cordial relationship.

"We have met with them and talked about a preservation strategy," Foley said.

DOTD Secretary Shawn Wilson said state officials have taken the unusual step of adding to the request for proposals that whoever lands the contract will have to work with Baton Rouge Green.

"With respect to the green footprint and the living median that we have, we are 100% supportive and inclusive of the idea of wanting to restore and maintain as much of that as possible," Wilson said.

What the I-10 project will do to the tree canopy of Baton Rouge has previously sparked little public attention.

Costs, timelines and how cars and trucks will get around during the work has gotten most of the focus.

But after a series of public hearings last year, members of Baton Rouge Green and others blitzed DOTD officials with dozens of written concerns about what will happen to all the trees that help make the city distinctive.

Comments on trees alone accounted for nearly 20% of the roughly 500 comments submitted to state officials.

"One of the things that make Baton Rouge beautiful is all of its trees," said one.

"Please do not cut down any of the beautiful live oaks at the I-10/12 split," said another.

"Our city's roadside trees and green infrastructure are crucial and valuable to me," said a third comment.

Critics included statistics on the value of having 4,300 trees along area roadways — preventing the runoff over more than 11 million gallons of stormwater, saving the community over 466,000 kilowatt-hours of energy and storing over 1.4 million pounds of carbon.

She said the greenery has been taken care of by residents and businesses since planting.

"Basically if they have ideas on where they would like to see trees planted in the public right of way we would be happy to talk to them about that," Kalivoda said.

He said DOTD officials worked with the group two decades ago when sound walls were erected near the I-10/12 split.

"I think it came out good," Kalivoda said. "I think a lot of people had an idea we were going to bulldoze all the trees at the split and that is not true. Very little impact there actually."

However, some trees near the roadway will be affected.

"The noise wall and the tree cannot occupy the same space," Kalivoda said.

"So those trees will have to go because we have to put up the noise wall. We can replant if we need to."

Both sides are talking about replanting 1.5 trees for every tree removed around the flyover.

Baton Rouge Green, which claims several hundred members, was launched in 1987 to help restore the city's urban canopy, according to the group's website.

Foley said in a worst-case scenario, it would cost about $250,000 to replace trees in the way of the I-10 expansion.

"The biggest question we encounter is not the design of the project," she said. "It is the construction areas."