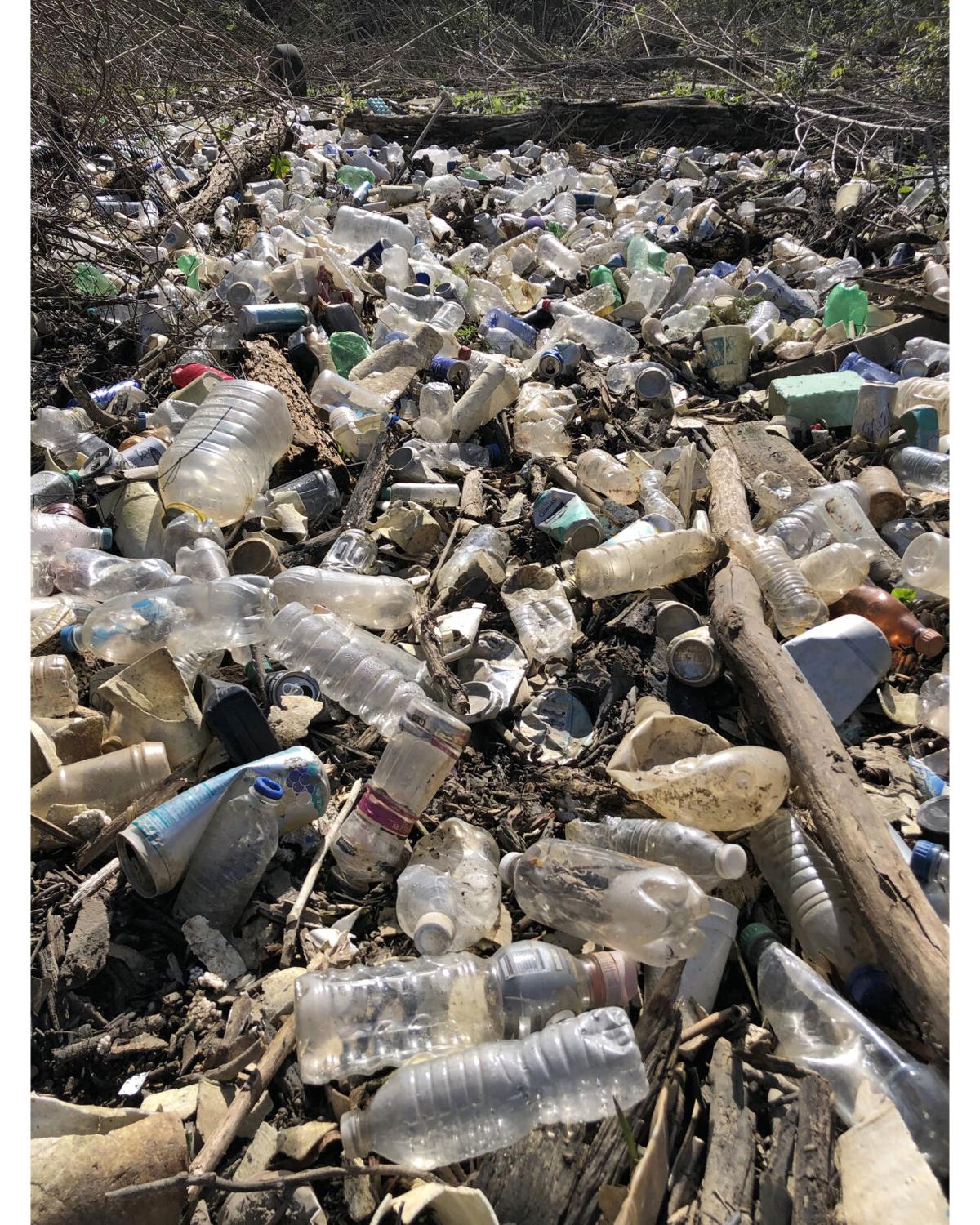 A "litter dam" near LSU's Burden Center photographed during the spring of 2020. Anti-litter activist Marie Constantin discovered the collection of bottles, Styrofoam and other waste last year and have been working to clean it up since. 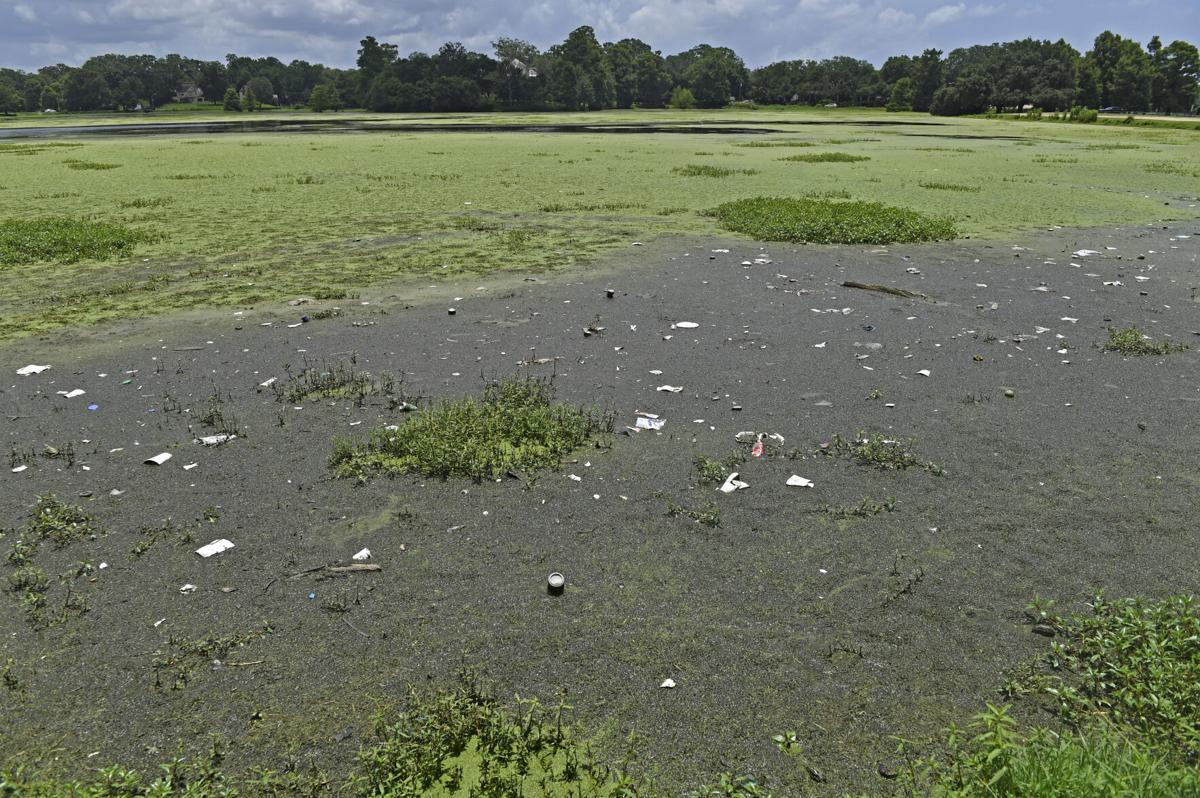 A "litter dam" near LSU's Burden Center photographed from a drone during the spring of 2020. Anti-litter activist Marie Constantin discovered the collection of bottles, Styrofoam and other waste last year and have been working to clean it up since.

A "litter dam" near LSU's Burden Center photographed during the spring of 2020. Anti-litter activist Marie Constantin discovered the collection of bottles, Styrofoam and other waste last year and have been working to clean it up since.

A "litter dam" near LSU's Burden Center photographed from a drone during the spring of 2020. Anti-litter activist Marie Constantin discovered the collection of bottles, Styrofoam and other waste last year and have been working to clean it up since.

Baton Rouge has gotten a lot trashier over the past 15 months.

The city has produced far more garbage than normal over the course of the pandemic. While city officials are only able to speculate on what is driving garbage increase, the trend has been seen nationwide during the pandemic.

Experts and local advocates say the change in lifestyle of many Americans living through COVID-19 restrictions is driving the trash increase. Instead of eating at a restaurant where dishes are washed and reused, takeout in disposable packaging is the norm. There’s also new garbage, like personal protective equipment — gloves and masks.

Beginning in March 2020, the total tonnage of garbage East Baton Rouge Parish collected spiked well above weekly totals for the same weeks in 2019 and 2018, according to city-parish data. The single highest week for garbage collection over the past three years occurred in May of 2020, with roughly 1,050 tons of garbage deposited into the landfill.

The trend continued throughout the year and into 2021. The city-parish set an “all-time record high” for garbage collection in March, collecting about 4,700 tons per week. That number that was partially due to the cleanup from the February ice storm, city-parish Assistant Chief Administrative Officer Kelvin Hill wrote in an email.

Tired of litter in Baton Rouge? 'Operation Clean Up' launches this weekend. Here's how it works.

More garbage in the landfill means more litter on city streets, said Susan Russell, executive director of Keep Louisiana Beautiful. The state and the city-parish don’t have a way to estimate the amount of litter in the city, but Russell said the problem is obvious.

“Except for the visual observation, we don’t really have a good handle on exactly how bad the problem is,” Russell said. “We know it’s bad because we can look out the window and see it.”

Louisiana had a litter problem well before COVID-19 found its way into the state. Baton Rouge is no exception; East Baton Rouge Parish Mayor-President Sharon Weston Broome promised to make addressing litter and blight in the parish one of her top priorities for her second term.

Then, pandemic restrictions halted programs like community cleanups and inmate litter crews. Businesses were also forced to lay off or furlough staff that would normally be on site to keep their properties free of trash, Russell said.

Baton Rouge mayor says cleaning up litter, trash, will be a second-term priority. Here's the plans

Along with an increase in illegal dumping and a record number of hurricanes last year, which can blow debris through the air and wash litter into waterways, it was “a perfect storm,” Russell said.

“We weren’t in a good place before, then all of this came on top,” Russell said.

Marie Constantin, a Spanish Town resident and litter-reduction advocate, said she’s noticed the uptick in litter during her weekly cleanups of Capitol Lake.

When she started picking up litter around the lake in January 2020, she saw “litter, the likes of which I’ve never seen in my life.”

Once the pandemic began, the amount of trash appearing on the banks of the lake exploded, Constantin said.

“It’s exponential,” Constantin said. “I can’t put a number on it scientifically, but the number is huge.”

To get a handle on the garbage increase, Republic Services recently hired 12 extra drivers and its staff is working an average of 59 hours per week, Hill said. Additional trucks have also been brought in for garbage and trash routes, and the city-parish extended the hours the landfill is open to allow for extra dumping.

But Constantin and Russell agreed that more needs to be done, and that starts with managing stormwater runoff.

When stormwater flows through city streets, it collects litter, oils, fertilizers and pretty much anything else left on the ground before making its way into waterways, such as Capitol Lake.

“Litter in a watershed is almost exclusively because a city does not treat its stormwater, meaning it doesn’t put in the litter-capturing and sediment-capturing equipment,” Constantin said.

The litter can clog storm drains, dam waterways and fill the bottom of lakes and rivers, which all exacerbates flooding, Constantin and Russell said.

The city-parish has already taken the first step toward addressing this problem by appropriating $20 million of its $167.2 million from the American Rescue Plan for drainage efforts, such as the cleaning of storm drains, culverts and ditches. Constantin called this a great first step but said much of that remaining funding should go toward stormwater infrastructure improvements, like equipment that can capture the litter and toxins in stormwater runoff before it reaches Baton Rouge’s waterways.

The city-parish has yet to receive and spend much of the remaining money from the stimulus package.

It's not just flooding: Baton Rouge is in violation of environmental rules for stormwater

Russell and Constantin said the city-parish is uniquely positioned to address the area’s problems with flooding, litter and stormwater management.

Their weekdays usually begin around 6 a.m.