An oil platform sits in the Gulf of Mexico. 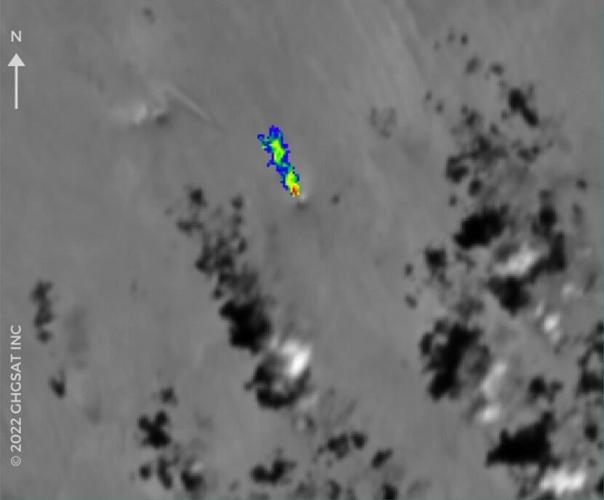 A relatively small methane leak at an offshore platform near Louisiana is detected by a satellite in August 2022.

Satellites now have the power to detect the small but all-too-common releases of a potent climate-warming pollutant from offshore oil and gas platforms in the Gulf of Mexico.

Environmental data company GHGSat announced Thursday that it had detected the smallest offshore methane emission ever seen from space. The plume was spotted at a platform off the Louisiana coast last month.

“These kinds of methane emissions fly beneath the radar because they’re so difficult to detect and the (platforms) are so remote,” Stephane Germain, CEO of the Montreal-based company, said Thursday. “Our first step was to prove this could be done. Now it’s about scaling it up.”

Curbing relatively small methane leaks across the Gulf’s 3,500 oil and gas platforms could have a large cumulative impact.

Methane, a colorless, odorless gas, has far greater heat-trapping potential than the carbon dioxide coming out of tailpipes and power plants.

“Methane is a powerful greenhouse gas that has 28 times the global warming potential of carbon dioxide,” said Sarah Jordaan, an environmental researcher at Johns Hopkins University.

While methane levels on rigs are routinely monitored for safety reasons, there are no standardized means of measuring their emissions, which usually happen when natural gas is flared or when methane gas seeps from tanks, pipelines and vents.

Fossil fuel operations generate about a third of all methane emissions from human activity, according to the International Energy Agency, which has urged swift action to reduce methane to curb the effects of climate change.

GHGSat has six high-resolution satellites that track greenhouse gas emissions for companies and government regulators. The company plans to add six more satellites and expand its reach across the Gulf and other world hotspots for offshore oil and gas activity.

Past satellite observations have only captured extremely large methane releases like one that happened last December when an offshore platform in the Gulf spewed methane at a rate of about of 218,000 lbs. per hour.

Large releases are much easier to spot but they’re relatively uncommon.

“The big ones happen when something just plain goes wrong,” Germain said. “It’s rare for a big emission to happen that an operator isn’t aware of. But the small ones are more nefarious. They’re harder to spot and not easy to deal with.”

This work is supported with a grant funded by the Walton Family Foundation and administered by the Society of Environmental Journalists.