Federal funding for the Comite River Diversion Canal is so erratic that state officials may want to consider heavily revising or even scrapping the 25-year-old plan, Legislative Auditor Daryl Purpera said Monday.

Purpera, in a 37-page audit, said since 2000 only one of 27 components of the project has been finished after $117 million of spending.

The issue is so serious, he said, that state lawmakers and others "may wish to determine if the Comite Project is still a viable project for the state or if it should be revised to fit into a larger flood protection strategy for the region," according to the review.

The auditor said the Louisiana Legislature might want to direct the Comite River Diversion Canal Task Force, which meets Wednesday, "to evaluate the viability of this project, including ways to obtain enough funding for completion, whether or not to revise the scope and design of the project or whether or not it should be continued." 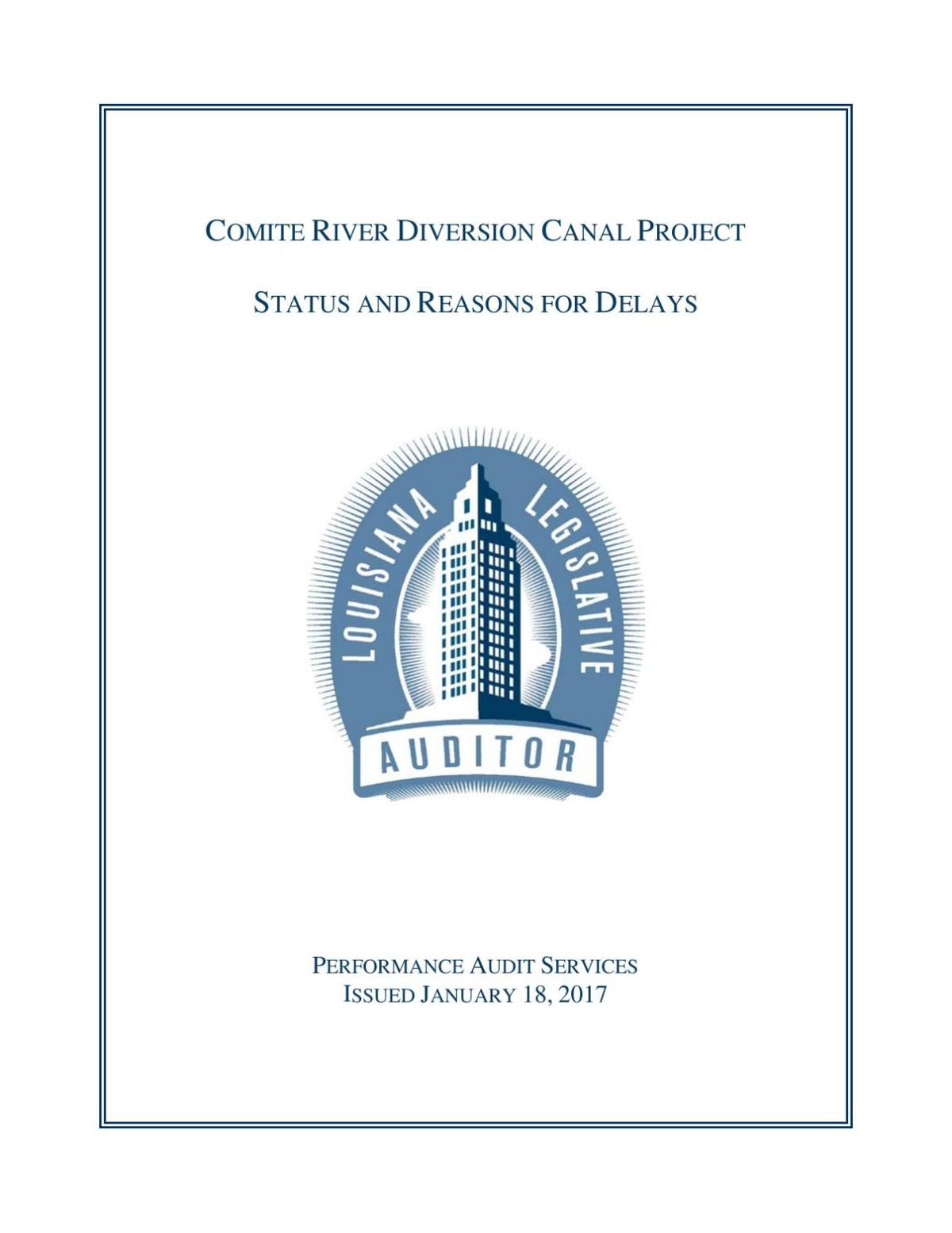 Purpera said inconsistent and insufficient funding for the U.S. Army Corps of Engineers is the key reason that little progress has been made.

"In addition to not having consistent or sufficient monies, any funds that the Corps does receive for the Comite Project can be redirected to other work if they are not spent in the year in which they are appropriated," according to the study.

"More than $200 million federal and state funds is still needed to complete the project," Purpera said in a preface to the report.

Gov. John Bel Edwards said he does not want to walk away from the project, but instead hold the federal government to its commitment to help build the canal.

"Our citizens have invested millions of their hard-earned taxpayer dollars into this project for more than 20 years," Edwards said in a prepared statement.

The project is a decades-old plan aimed at protecting homes and businesses from flooding.

What are the prospects for decades-old Baton Rouge-area flood protection plan after August disaster?

Despite the massive flooding that struck south Louisiana in August, prospects for a decades-…

The 12-mile structure would siphon high water from the Comite River, sending it instead to the Mississippi River.

The Comite is a tributary of the Amite River.

Officials say that, if the canal had been in place during historic flooding in August, damaged and destroyed homes in the Baton Rouge area would have been trimmed by about 25 percent.

If all the money was received today it would take another two or three years to complete at a total cost of $313 million, according to the audit.

Officials of the state Department of Transportation and Development, in a written response to the report, also said long-term questions need scrutiny.

"The federal funding of the Comite project will have to be evaluated," DOTD officials wrote.

If the work cannot be done in a "reasonable time frame," they said, the state could consider using bonds to finance the work.

State Sen. Bodi White, R-Central, who has been involved in the project for years, said he wishes the Corps would partner with state officials to get  the canal done as Corps officials did to rebuild levees in New Orleans after Hurricane Katrina struck in 2005.

White said he has had discussions about trying to get the Comite built through a public/private partnership.

Edwards said his office has submitted a letter to the Trump administration, through the National Governors' Association, which listed the canal as one of the top projects to consider in any federal infrastructure package.

"My administration is working closely with the congressional delegation to secure funding for the Comite River Diversion Canal project," the governor said.

U.S. Rep. Garret Graves, R-Baton Rouge, said Monday that, while the Corps has problems, he favors staying on the current course to build the canal.

He noted that Congress approved $14 million in recent years for the project, and before the 2016 flood.

Graves said he also favors a concurrent, basin-wide study and a focus on drainage issues is tributaries of the Amite and Comite rivers were also overwhelmed in the August flood.

Bobby Duplantier, the Corps' senior project manager on the project, said in December that a lack of dollars, not arcane formulas used by the Corps is evaluating projects, is the main reason the work is stalled. The Corps is dependent of funding from the U.S. Congress to finance projects.

However, the state faces recurring budget problems, which would complicate any push for it to assume responsibility for the construction.

Trouble acquiring land is another problem, according to the audit.

In addition, delays in a bridge construction project on U.S. 61 – another component of the canal – has hampered work, Purpera said.

The state Department of Transportation and Development has to relocate utilities before the bridge is built.

However, DOTD officials have said they are concerned that no federal funds will be approved for the canal and that money to relocate utilities will be wasted, the audit said. DOTD is one of four agencies involved in the project.

The others are the Corps, East Baton Rouge Parish and the Amite River Basin Commission.

Dietmar Rietschier, executive director of the commission, said in a written response to the audit that his panel agrees with Purpera's conclusions.

"It would be irresponsible to abandon the project after spending $39 million of non-federal funds and $78 million by the federal sponsor," Rietscher wrote.

Some residents of East Baton Rouge, Ascension and Livingston parishes have been paying property taxes for the canal since 2001, $30 million so far.

Gov. John Bel Edwards has requested additional federal money for the historic flood of 2016. One item of the request was $125 million to compl…

U.S. Sen. John Kennedy and Gov. John Bel Edwards got into a spat Thursday over Kennedy's proposal to use up to $175 million in unclaimed prope…