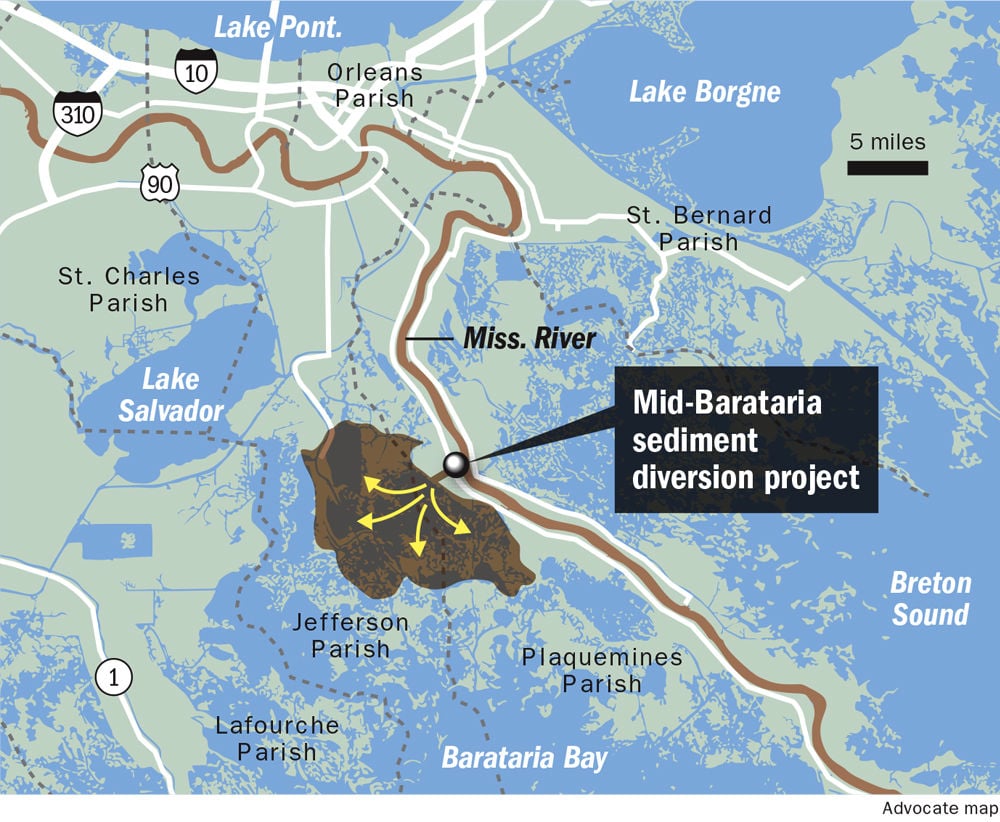 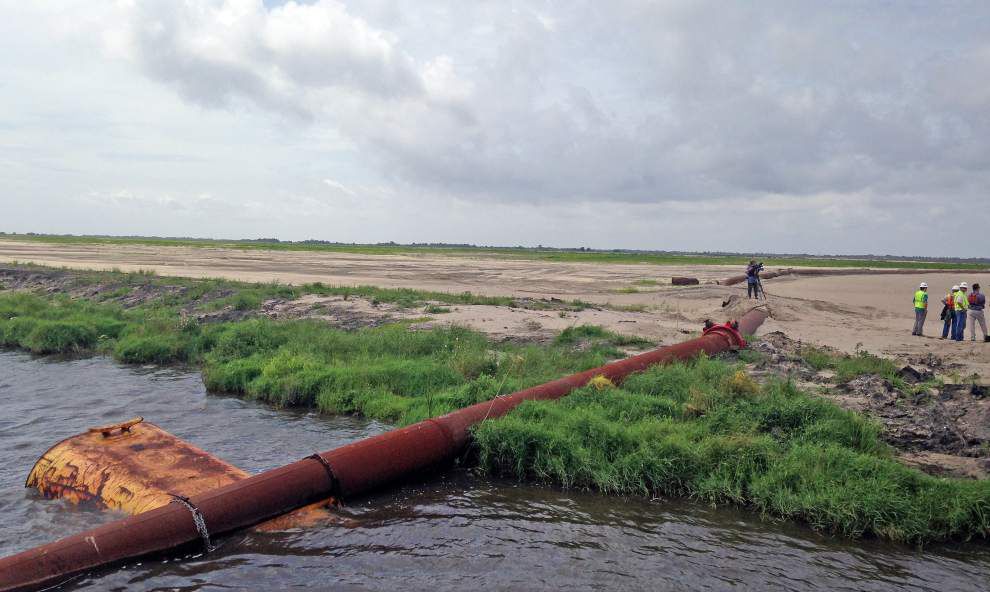 Advocate photo by AMY WOLD -- A pipe is used to move sediment dredged in the Mississippi River about 10 miles to this site where it is pumped and shaped to build land in the Barataria Basin. Two projects in this location just southeast of Jean Lafitte will build 805 acres of land when it's completed later this year.

Advocate photo by AMY WOLD -- A pipe is used to move sediment dredged in the Mississippi River about 10 miles to this site where it is pumped and shaped to build land in the Barataria Basin. Two projects in this location just southeast of Jean Lafitte will build 805 acres of land when it's completed later this year.

WASHINGTON — The Trump administration has agreed to lop about three years off the permitting process for Louisiana's proposed Mid-Barataria Sediment Diversion project.

A memorandum of understanding signed Friday morning sets an August 2019 deadline for a decision by the U.S. Army Corps of Engineers and a litany of other federal agencies on permits for the massive project, designed to build new land along Louisiana's coast by sending sediment-rich water from the Mississippi River flowing into the Barataria Basin in Jefferson and Plaquemines parishes, north of Grand Isle.

The U.S. Corps of Engineers had previously told state officials that an environmental study of the proposal and decisions on whether to issue permits could take until 2022, a prospect that state coastal officials called "unacceptable."

Louisiana's congressional delegation and state leaders have lobbied furiously to speed up the process. State officials hope to begin construction on the Mid-Barataria diversion in 2020.

Gov. John Bel Edwards announced the deal to a packed room of Louisiana business and political leaders at the Washington Hilton hotel, where much of the state's political class has set up camp this week for Washington Mardi Gras.

The state's coast, largely built over thousands of years by sediment carried down the Mississippi and other rivers, has been shrinking for decades. Since 1932, nearly 2,000 square miles of land has vanished.

Projections from the Coastal Protection and Restoration Authority, the state agency tasked with fending off land loss, indicate at least as much land may disappear over the next half-century.

Edwards called the erosion of the coast "an ongoing emergency that requires swift national attention" and hailed the new agreement as "a monumental achievement."

U.S. Rep. Garret Graves, R-Baton Rouge, said he's been working hard on the issue for months, along with the governor and other members of Congress. Graves, who ran CPRA under former Gov. Bobby Jindal, has been a sharp-tongued critic of the slow federal permitting process and repeatedly raised the need to speed up the review of Mid-Barataria during a visit to Louisiana by Interior Secretary Ryan Zinke in early December.

The Mid-Barataria project is a central part of the agency's strategy to rebuild coastal land by using the river and the huge amounts of soil and rock it carries. The project would essentially involve cutting a hole in the Mississippi River levee and installing a control gate to send some of the river's sediment-rich water flowing into the basin instead of downriver into the Gulf of Mexico.

"CPRA knows that we have to do big things to change the trajectory of our coast and permitting and constructing Mid-Barataria has long been seen as the first big test of that agenda," said Johnny Bradberry, chairman of CPRA's board.

The agency is also plotting a similar diversion project on Breton Sound, which sits just to the north of the Mississippi River's lower "bird's foot" delta.

Graves said Friday's agreement comes on the heals of a decision earlier this month by the Corps of Engineers to start reviewing designs for Mid-Barataria even as engineers for the state are still working on details of the plan.

A number of other challenges still lie ahead for the project, a first-of-its-kind undertaking that carries a $1.4 billion price tag. Though the memorandum of understanding signed Friday sets clear goals, it isn't binding and makes no assurances that federal authorities will ultimately issue the needed permits.

Among the potential issues being considered by federal officials is whether the design or construction of the project's control gate might compromise the flood-protection levees along the Mississippi.

Federal officials will also need to consider the potential environmental impact of sending large amounts of fresh water — as much as 75,000 cubic feet per second — pouring into the wetlands of Barataria Basin. Changes in water temperature and salinity can affect plants and wildlife.

The National Marine Fisheries Service has also raised questions about whether the diversion could make Barataria Bay too fresh for the bottlenose dolphins that currently call it home, raising potential issues for the project under the Marine Mammal Protection Act.

But backers of the project have noted that land-loss and the northward creep of salt into freshwater marshes are already imperiling the environment. The diversion, its backers note, is designed to restore wetlands — and point to potentially devastating consequences of inaction.

Graves and other members of Congress from Louisiana are currently pushing for a potential waiver to the Marine Mammal Protection Act for the sediment diversion projects.

"The Mid-Barataria Sediment Diversion is vital to avoid a future where 500 square miles of land in Barataria Basin alone would disappear. Louisiana must be able to harness the land-building power and sands and muds of the Mississippi River to push back against sea level rise, hurricanes and subsidence," Restore the Mississippi River Delta, a coalition of prominent local and national conservation groups, said in a statement Friday.

"It’s time to get the Mid-Barataria Sediment Diversion constructed, so it can begin rebuilding our coastal defenses sooner rather than later," the group added.

Interior Secretary Ryan Zinke vowed to use his clout to fast-track coastal restoration projects during a Saturday visit to Louisiana.