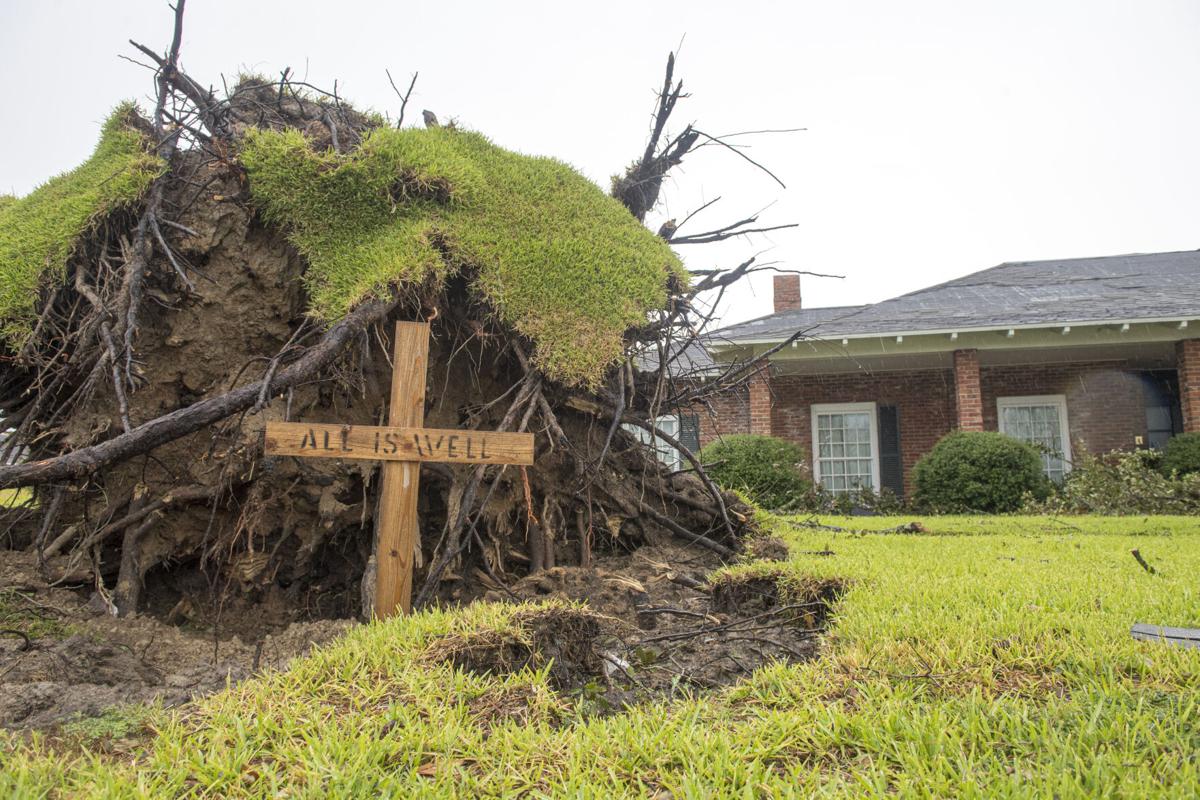 A wooden cross marks the spot where a pine tree fell,  missing this house by inches in Lake Charles. 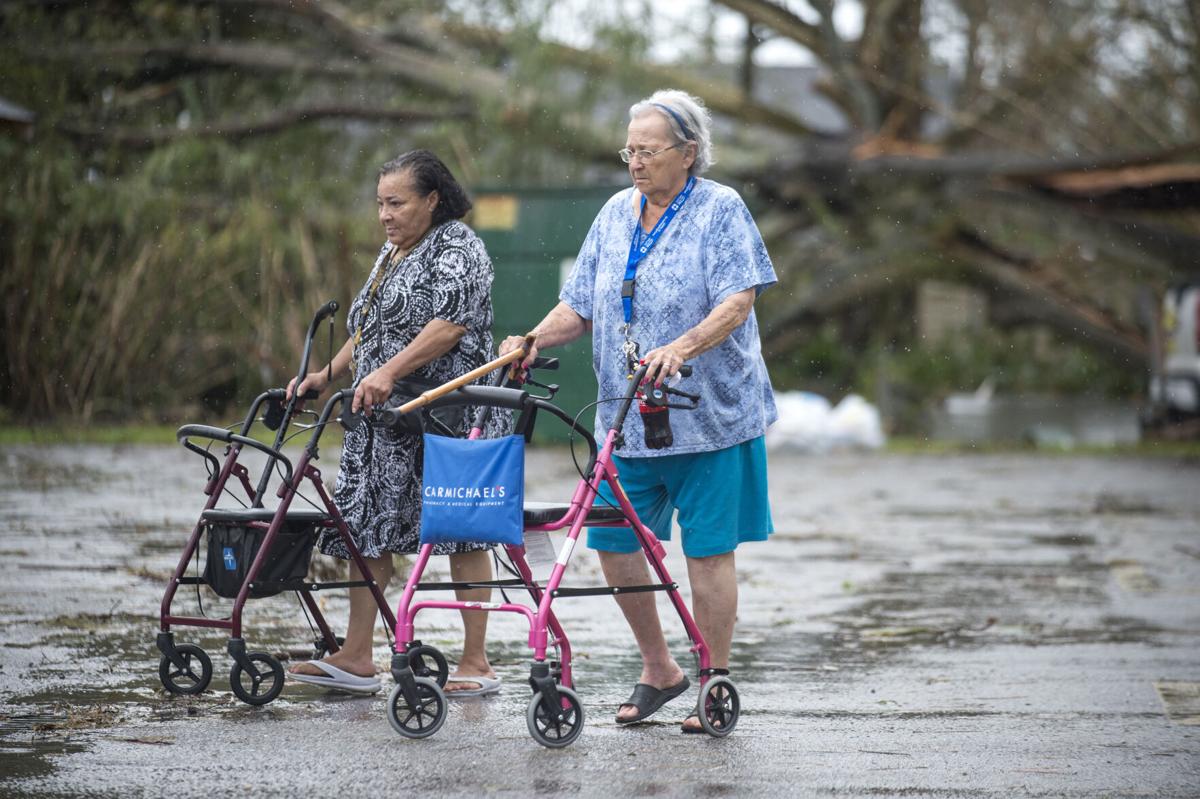 Residents of an apartment complex in Lake Charles were given one day to pack up and leave because of the lack of water and electricity on Friday. Some of the residents living on upper floors struggled to get down without elevator access. 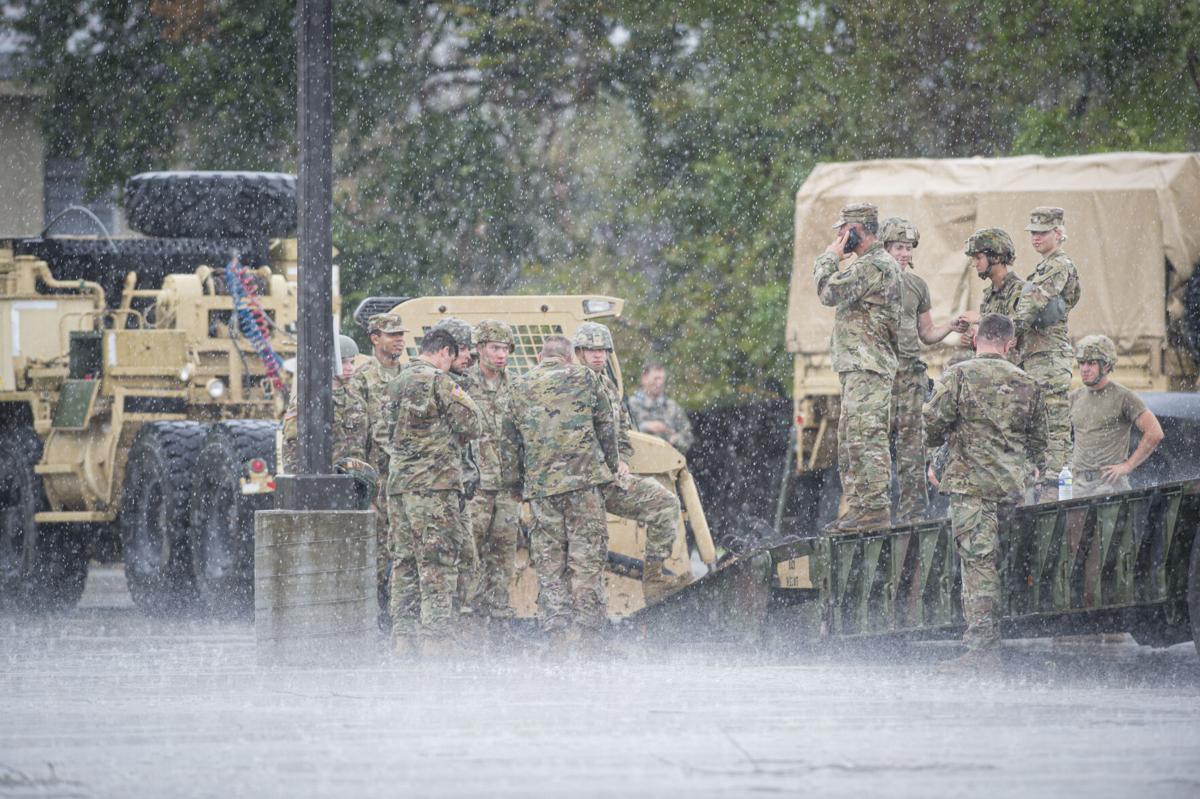 Members of the Louisiana National Guard gather in a steamy rain in a parking lot to plan recovery efforts on Friday following Hurricane Laura. 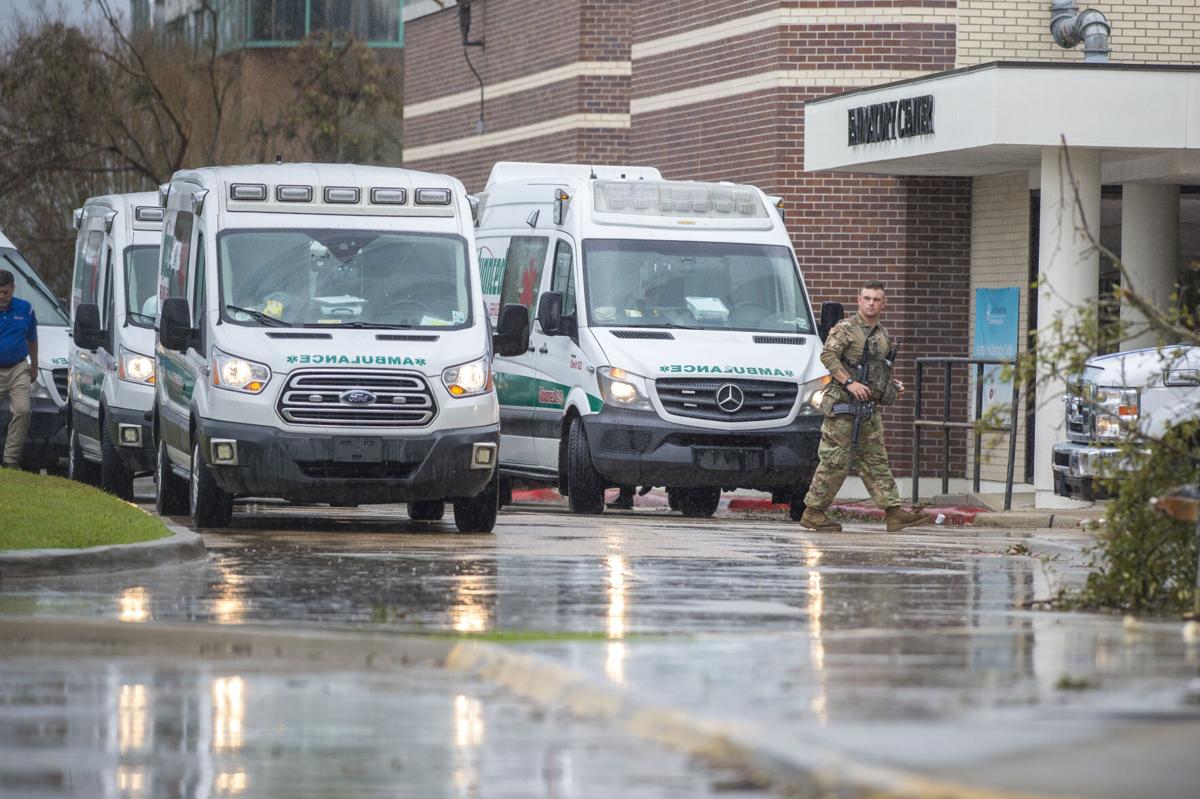 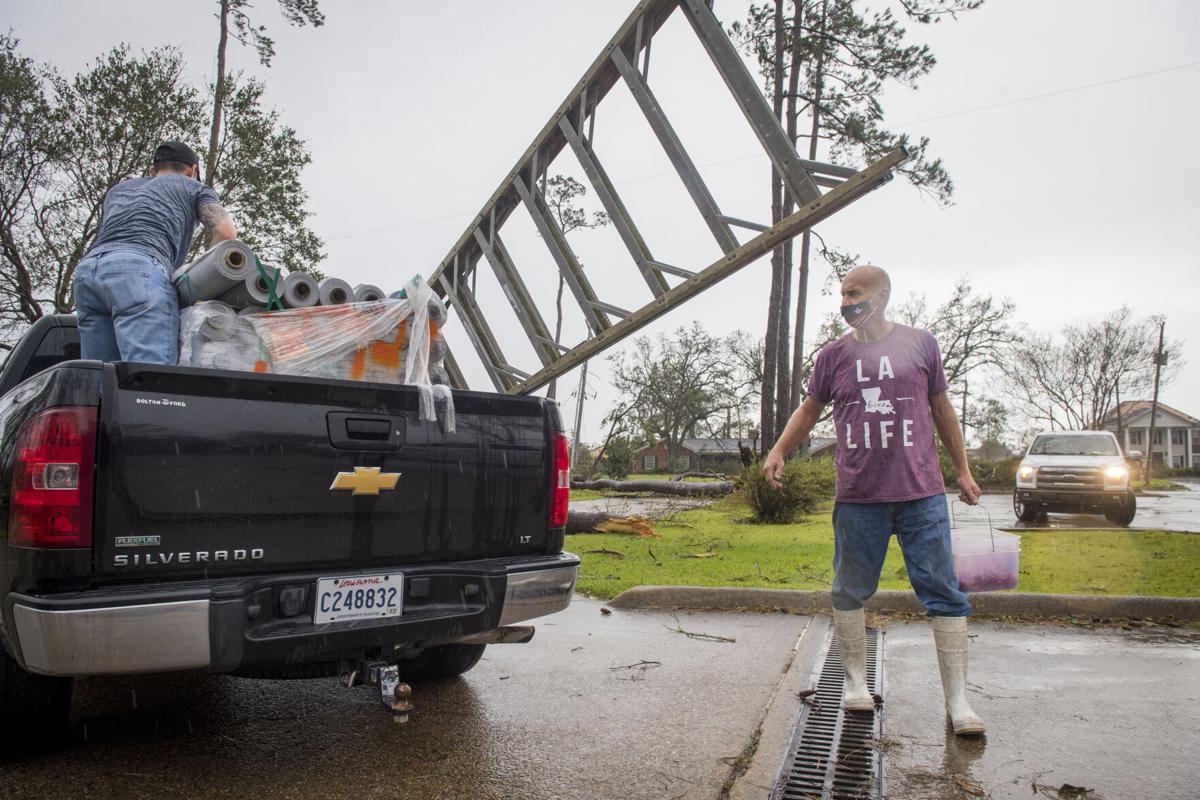 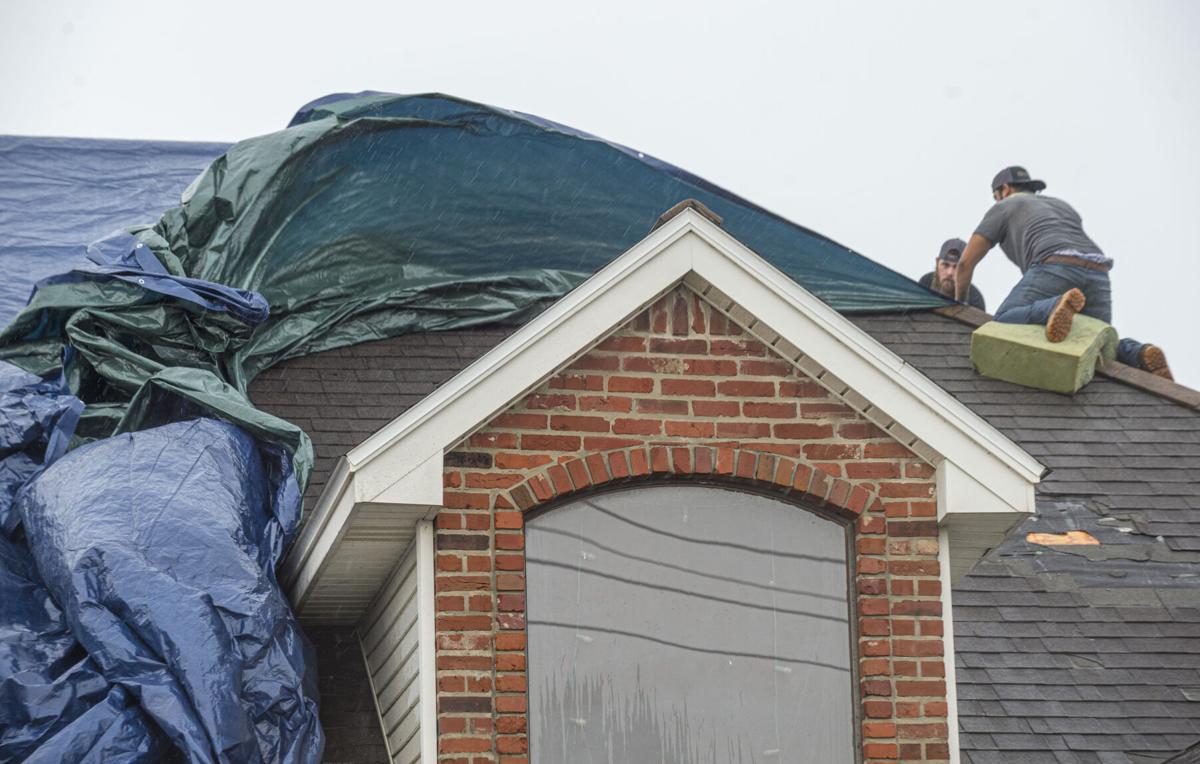 The wind whips the 20-by-50-foot tarp that Jafet Uscanga, 20, and his coworkers with Paul Davis Restoration  of Houston were placing on a Lake Charles roof Friday. Recovery efforts were underway after Hurricane Laura. 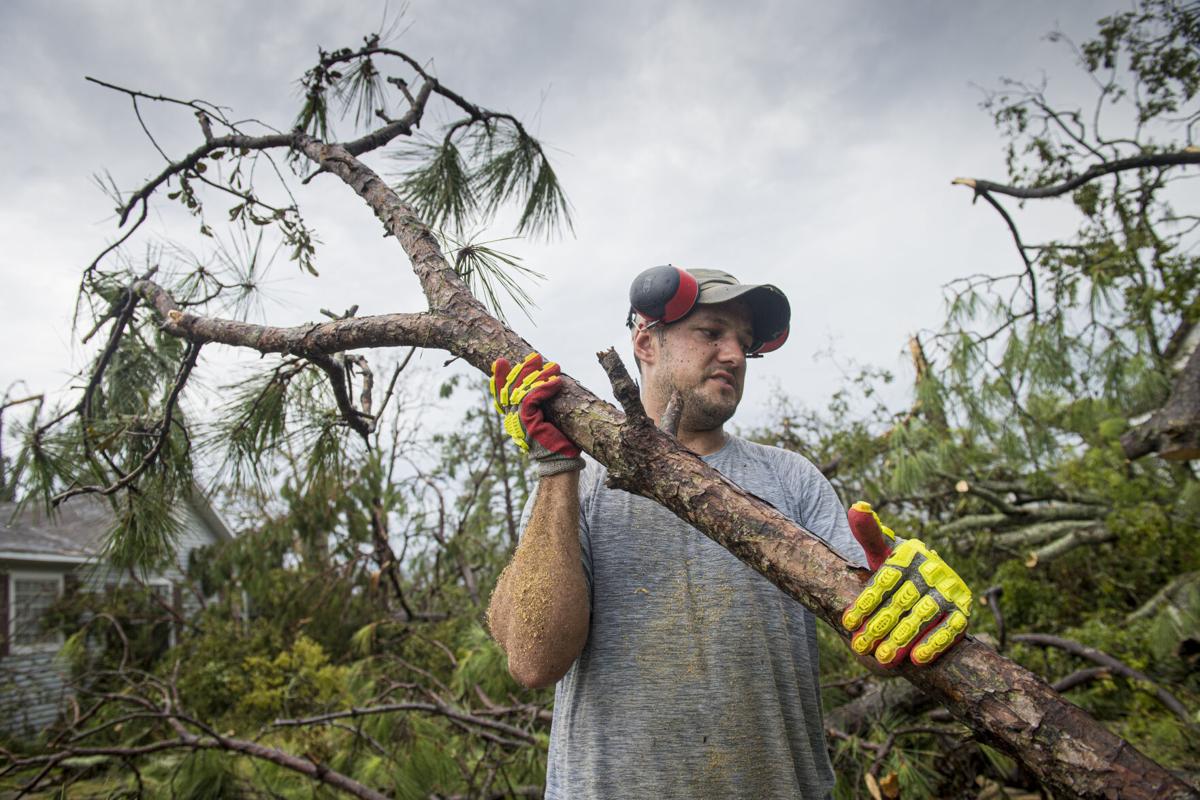 LAKE CHARLES — A day after the most powerful storm to strike Louisiana in a century and a half roared through, this city of nearly 80,000 people was in shambles, with thousands of houses in ruins, trees blocking roadways and power lines strewn in the streets.

Most homes had no electricity and little if any running water Friday, leading local and state officials here to fret about a public health crisis and to encourage those who had evacuated from Category 4 Hurricane Laura to stay where they are if possible.

Mayor Nic Hunter cautioned that there was no timetable for restoring electricity and reliable water service. "If you come back to Lake Charles to stay, make sure you understand the above reality and are prepared to live in it for many days, probably weeks,” Hunter wrote on Facebook.

But with thousands of homes left roofless and open to the elements, many residents of the region were eager to take steps to prevent further damage, some stringing tarps over their roofs on a gray day that saw intermittent but powerful showers. Some people said they lacked the money to remain evacuated.

President Donald Trump announced plans to visit Lake Charles on Saturday to meet with local and state officials, including Gov. John Bel Edwards, and get a firsthand look at Laura’s devastation. The White House said Trump would also visit Texas.

As of Friday morning, there were 543,000 homes without power across Louisiana. Another 209,000 residents were affected by water outages caused by the storm. Edwards requested a major disaster declaration from Trump for 23 parishes affected by the storm, including Calcasieu, Cameron, Acadia and Vermilion parishes.

Edwards said Friday that Laura’s death toll had risen to at least 10, including four who died when trees fell on homes, one who drowned in a boat and five people who died from carbon monoxide linked to the use of generators.

But Laura’s real legacy was the massive swath of damage inflicted by the storm’s tornado-like winds, so powerful that those who opted to hunker down and stay were still talking about how frightening the experience was.

Don Robinson recounted a harrowing night spent in his house as it came apart around him. Robinson described his home as "breathing" through the storm as the wind rushed inside and the walls expanded and contracted.

"It was horrible, man. I’m 59 years old and I always thought I wasn’t afraid of anything, but she (Hurricane Laura) put fear in me," said Robinson. "Now I realize, if I don’t have nowhere to go, I’ll run in my Tahoe until I run out of gas and that might be a better place to survive."

Insurance companies are getting a scope of the damage caused by Hurricane Laura, with an analytics already estimating insured damage in the st…

On Friday, Robinson sat outside on his shared porch with neighbors, cooking a chicken and sausage stew on a small propane burner and taking shelter from the rain that was pouring into his now-roofless home. Robinson said he had a dwindling supply of water and little cash or other supplies. He and his neighbors were worried about what comes next, saying they’d received no word about any sort of disaster aid or relief.

Robinson’s modest home was among thousands across the region that had major roof and other structural damage, leaving their contents vulnerable to rain and bringing urgency to a nascent tarping effort.

Other than extensive flood damage in lightly populated coastal sections of Cameron and Vermilion parishes, Laura’s winds rather than the surging Gulf waters associated with the storm caused most of the devastation. But water damage could become more of a concern if rains continue to soak the homes and buildings whose roofs now lie in piles of shingles, nails and beams on the ground.

“Tarps are like gold,” said Leven Abshire, 30, as he worked to cut and clear trees on Friday from debris-clogged roads in the city.

Abshire said he had “a s--t-ton of tarps” in the covered bed of his truck, and he was telling everyone he knows coming into Lake Charles for cleanup efforts to bring more. He was offering to tarp houses for free and give people claim forms to pass along to their insurance.

Before tarping roofs, there was a mass of debris to clear, and Abshire was far from the only person out with his chainsaw. Neighborhoods across the city were humming with a symphony of two-stroke engines, as utility crews, carpenters and convoys of tree trimmers from states away poured into town. Yard signs advertising clean-up services already dotted the roads.

A crew of water technicians from Paul Davis Restoration in Houston arrived Thursday, spent the night in trucks in a parking lot and then went to work pulling a 20-by-50-foot tarp over a dentist’s office on Lake Street. The job could have taken two hours, but the rain made it go slower.

“Every time we get up there, the rain starts again,” said Steven Kull.

Kull said his crew is used to going into disaster zones, as they worked in Houston after Hurricane Harvey and in Joplin, Missouri after catastrophic 2011 tornadoes. The damage in Lake Charles, he said, is among the worst he’s seen.

The scene, and the effort, were familiar to veterans of storms like 2005's twin hurricanes, Rita and Katrina. The latter gave rise to a huge, federally funded effort called Operation Blue Roof that paid for small armies of workers to fan out across much of Louisiana to cover hundreds of thousands of damaged roofs with regulation blue tarps fastened down with wooden slats.

In perhaps the only lucky break Louisiana received in that dreadful summer, Katrina was followed by a period of several weeks in which almost no rain fell.

Damage could reach $12B

Rita was the previous standard-bearer for property damages in southwest Louisiana, and early estimates suggested that, despite Laura’s higher wind speeds, Rita might yet remain the costliest storm to affect the region.

CoreLogic, an analytics firm, is estimating insured damage to homes and businesses in Louisiana will be between $8 and $12 billion. Similar damages in Texas are estimated at less than $500 million.

Moody’s Analytics put the damage estimate in the $4 to $7 billion range, but said those were very rough guesses.

At a news conference Friday in Ruston, where he was surveying Laura’s damage to the northern part of the state, Edwards said he is concerned about how the storm might affect the spread of the coronavirus.

Edwards said southwest Louisiana was the most active region in the state for new cases before the storm arrived. He noted that about 3,000 residents of the region who fled the storm were huddled in hotels Thursday night.

Meanwhile, about 6,200 members of the National Guard, many of whom had been assisting with testing for the virus, were instead helping with storm recovery Friday.

"This is a very bad week for us not to be doing robust testing," Edwards said, noting that hospitalizations for the virus were up Friday compared to Thursday.

Aside from the 10 storm-related deaths, state officials Friday announced 30 more deaths from the virus.

"When you put them both together it is extremely challenging," Edwards said.

Lovetta Strong, 27, knows about challenges. She found her car trapped in deep mud ruts after trying to navigate fallen trees to reach her Lake Charles home on Friday.

Strong said she'd fled on Tuesday — taking her 13-year-old and 1-year-old sons with her to Fort Worth, Texas — and came back to gather whatever they could from their badly damaged home before fleeing again to Eunice.

Strong, who works at a local Taco Bell, has worked straight through the pandemic as an essential worker, but the fast-food joint shuttered ahead of the storm. Evacuating from Laura has wiped out her finances and Strong has yet to hear about any form of hurricane relief she might lean on.

"I probably got $80 left to my name. That’s why we had to come home, because we couldn’t afford to stay there" in Texas, Strong said. "There’s no financial assistance, no food stamps have been given out, nothing has happened.”

Others were more fortunate.

The Louisiana Department of Health confirmed four new deaths related to Hurricane Laura on Friday, after a family of four in Calcasieu Parish …

As George and Clara Heard walked to their home for the first time since evacuating, they found business cards from a handful of different companies tucked into their doorframe. They were among the lucky ones: Their home was almost entirely spared damage, though a neighbor’s roof had been torn clean away.

Down the street, David Morens used a large broom to push a thick mat of pine needles, branches and debris from the road. Morens stayed, a choice influenced by the negligible impact of Hurricane Marco earlier in the week and by the fact that his 18-year-old dog can’t travel. He described the decision as perhaps the dumbest of his life.

Fifteen years ago, Hurricane Rita knocked down eight of Morens’ trees. Laura took down the last remaining one.

-Staff writers Will Sentell, Timothy Boone and Tyler Bridges contributed to this story.