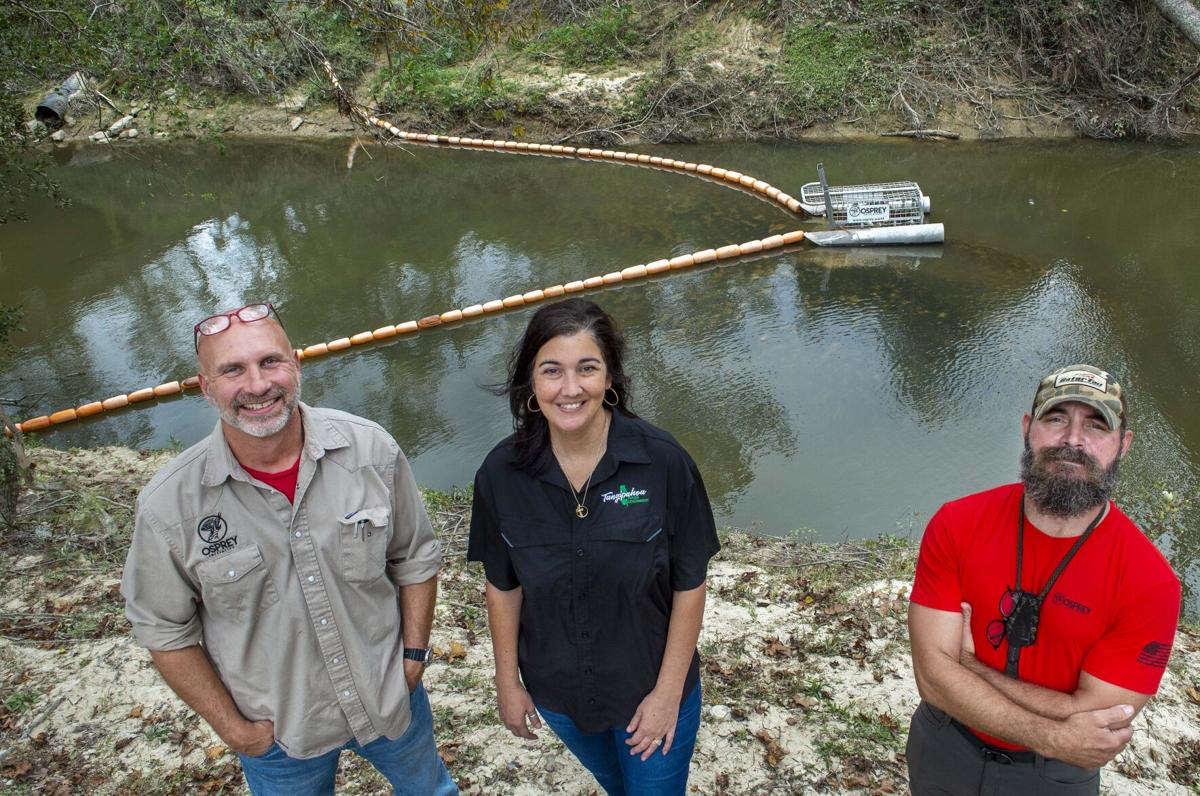 From left, Don Bates, Osprey Initiative owner, Kim Coates, Tangipahoa Parish Councilwoman, and Nathan Farris, Osprey District Manager, talk about the effort in Tangipahoa Parish that has led to the collection of two tons of trash via devices called "litter getters" that collect garbage out of the waterways, Wednesday Nov. 17, 2021, in Hammond, La. Clean up is taking place on the Yellow Water River at the East Adams Road Bridge. 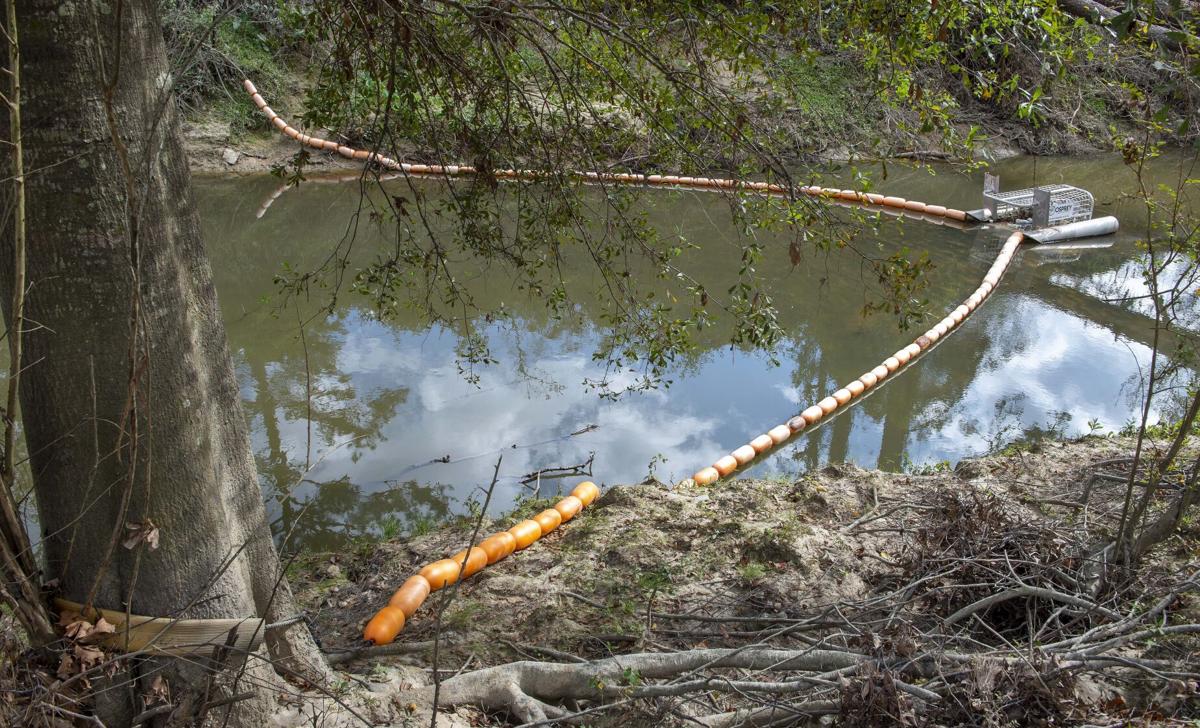 An effort in Tangipahoa Parish has led to the collection of two tons of trash via devices called "litter getters" that collect garbage out of the waterways, Wednesday Nov. 17, 2021, in Hammond, La. Clean up is taking place on the Yellow Water River at the East Adams Road Bridge. 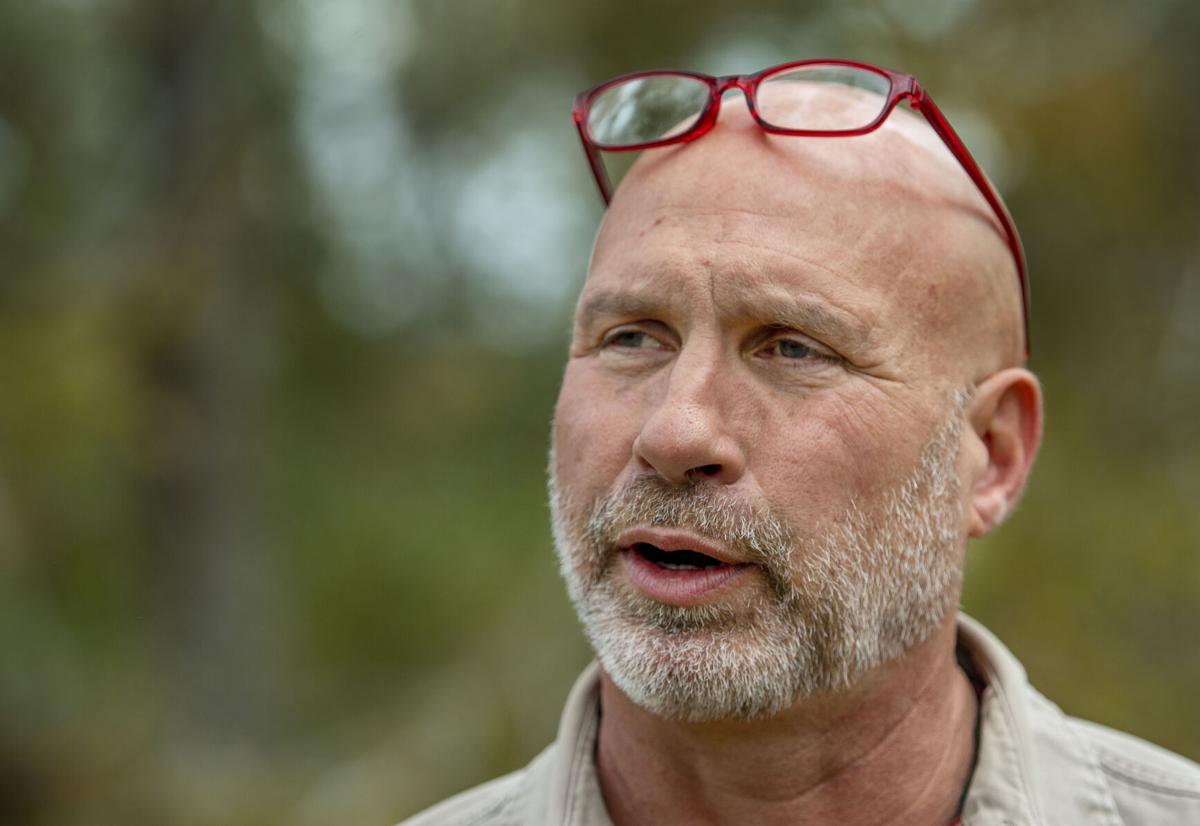 Don Bates, Osprey Initiative owner, talks about the trash pickup effort in Tangipahoa Parish has led to the collection of two tons of trash via  "litter getters" that collect garbage out of local waterways Wednesday Nov. 17, 2021, in Hammond, La. Clean up is taking place on the Yellow Water River at the East Adams Road Bridge. 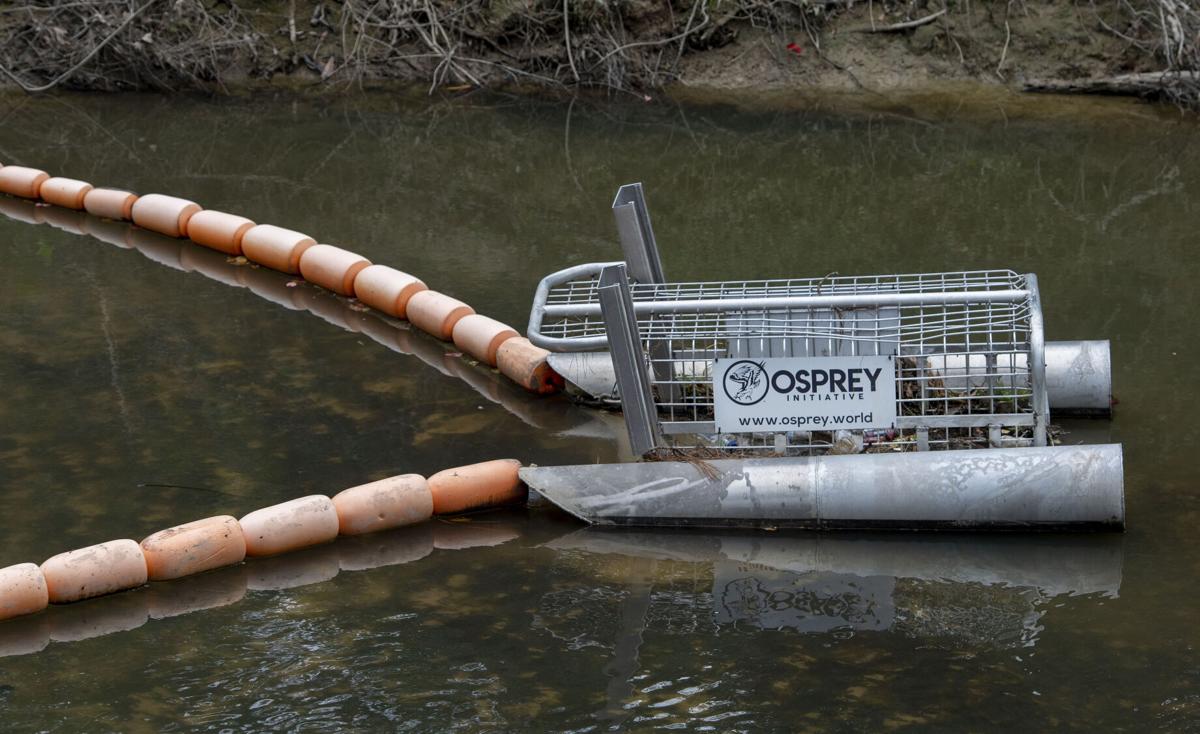 An effort in Tangipahoa Parish has led to the collection of two tons of trash via devices called "litter getters" that collect garbage out of the waterways, Wednesday Nov. 17, 2021, in Hammond, La. Clean up is taking place on the Yellow Water River at the East Adams Road Bridge.

Growing up, Don Bates and Nathan Farris spent their weekends in Manchac, the swamp that buffers the piney woods of Tangipahoa Parish from the northern shores of Louisiana’s two great lakes. The quiet beauty of the area — home to alligators, ospreys, eagles and snipes, among other creatures — came to “drive who we are,” Bates said.

If the natural landscape was formative for the pair, who often went hunting and fishing together, so too were risks pollution and waste posed to the area.

On hunting and fishing trips, they would see matted garbage collecting in the swamp grass — Coke cans, styrofoam cups, plastic bags and other refuse that poured into the lakes through the area’s many bayous and streams. Some drivers seem to regard the waterways as their own private garbage cans while crossing a bridge or passing along a riverbank.

“Through the years, the litter starts to drive you nuts,” said Farris on a recent afternoon in Hammond, standing near the banks of the Yellow Water River.

Those frustrations spurred Bates to leave a secure corporate job and invent the “Litter Getter” — a squat metal cage that looks a little bit like the traps used to catch live rabbits or raccoons.

Installed in rivers and streams around the parish, the devices sit in the middle of waterways, connected to the banks by lines of buoys. The buoys guide floating trash into the open mouth of the cage. What can’t fit in the cage floats there in the water, suspended by the buoys.

Local officials call the devices an innovative fix to what’s become a big challenge. Litter complaints have increased amid a population boom in Ponchatoula and Hammond.

“These waterways all connect down on the swamp,” said Kim Coates, a Ponchatoula-area member of the parish council. “Growing up, the litter down there was just unreal. I’ve known it all my life.”

Since the Parish entered a grant-funded partnership with the Bates’ company, the Osprey Initiative, in 2020, three Litter Getters in the parish — one on Ponchatoula Creek, another on Selsers’ Creek and a third on the Yellow Water River — have gathered two tons of garbage. The company is poised to install the devices in more parishes in the Pontchartrain Basin before the end of the year.

Farris, the company’s lead field worker, checks and empties the traps twice a month and after major rainstorms, which tend to push trash off banks, down waterways and into the traps.

That has alleviated pressure from local volunteer groups who faced mounting responsibility for cleaning out waterways.

“We fight it a little more routinely,” said Bates. “This is a pervasive, weekly problem that it’s hard to solve off the back of twice-a-year volunteer efforts.”

Originally from Hammond, Bates founded the Osprey Initiative in 2017 and runs the operation out of Mobile, Alabama.

There, the company installed the first Litter Getter through the Mobile Bay Estuary Program. It’s since joined with local governments to set up the devices in seven other states besides Louisiana and Alabama, as far north as Ohio.

The device allows staff like Farris to sort trash recovered from the traps into multi-stream recycling — which yields cleaner and thus easier-to-reuse material than single-stream recycling and dumping refuse into the landfill.

Bates calls the clotted masses of trash that collect in the metal cages a “Rosetta Stone of litter.” Rainstorm by rainstorm, month by month, the bricks of trash packed into the devices tell a story, he said, of what disposable products residents are buying and what they choose to throw away — and how that material might be reused in the future.

Brenda Harris and her husband, Johnny, grew up in the swamps that buffer the pine woods of Tangipahoa Parish from the north shores of lakes Ma…