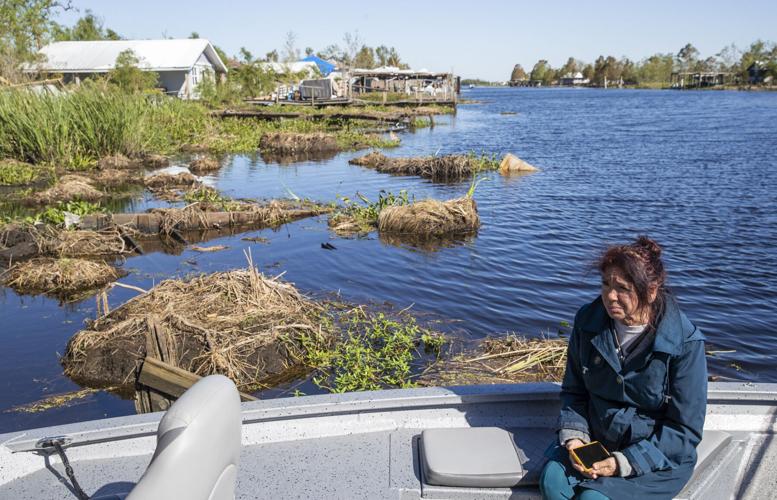 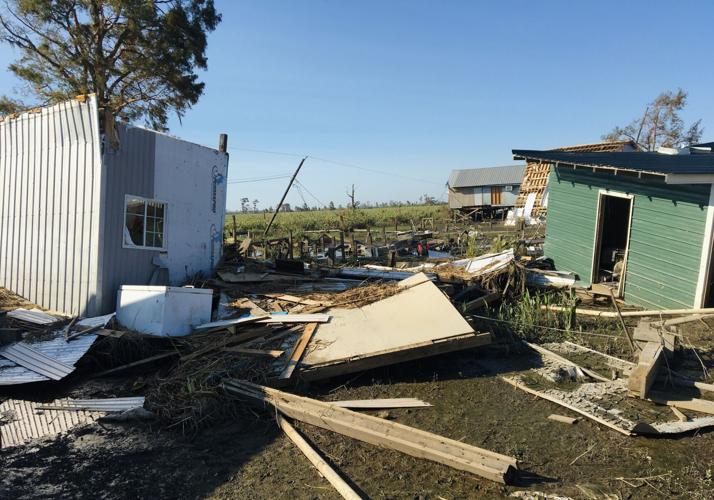 Homes destroyed by Hurricane Ida in Manchac, La. on Saturday, Sept. 11, 2021 after the storm swept through about two weeks earlier. A combination of eight-foot storm surge from Lakes Maurepas and Pontchartrain and howling winds wreaked vast damage on camps in the area, which are built into the swamp and only accessible by water. 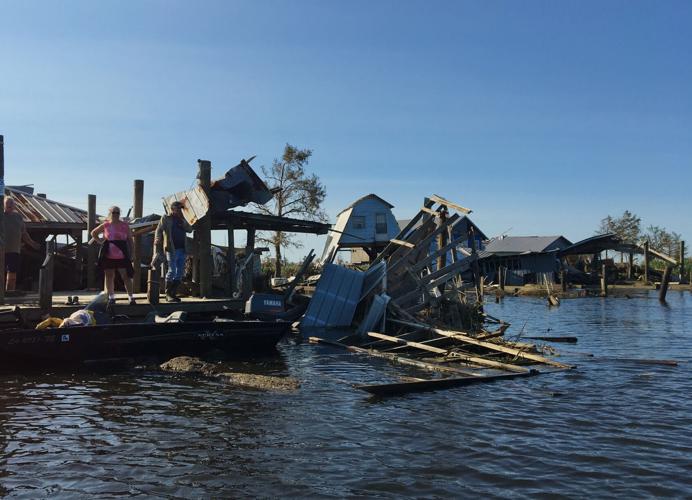 George Bennett (right) looks out at damages wrought by Hurricane Ida in Manchac, La. on Saturday, Sept. 11, 2021 after the storm passed through the area almost two weeks earlier. A combination of eight-foot storm surge and howling winds wreaked vast damage on camps in the area, which are built into the swamps of Lake Maurepas' northeast shores and are only accessible by water. 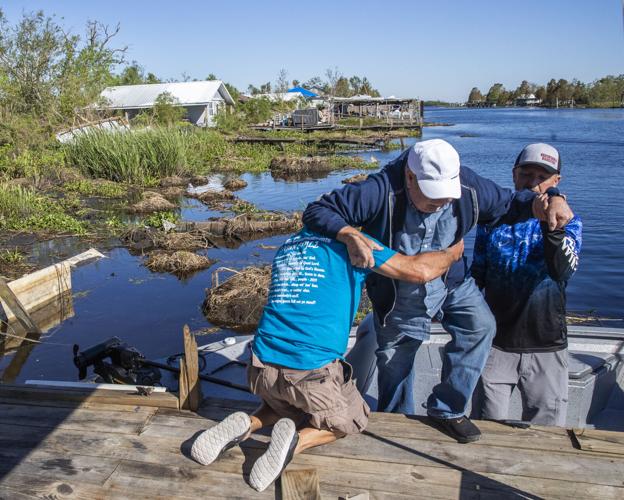 Kermen Thibodaux and Mike Choate help Daniel Dubroc onto his dock so he could see his Bayou Segnette home for the first time since Hurricane Ida in unincorporated Jefferson Parish, La., Thursday, Sept. 23, 2021. Less than 10 residents call Bayou Segnette their full-time home. (Photo by Sophia Germer, NOLA.com, The Times-Picayune | The New Orleans Advocate) 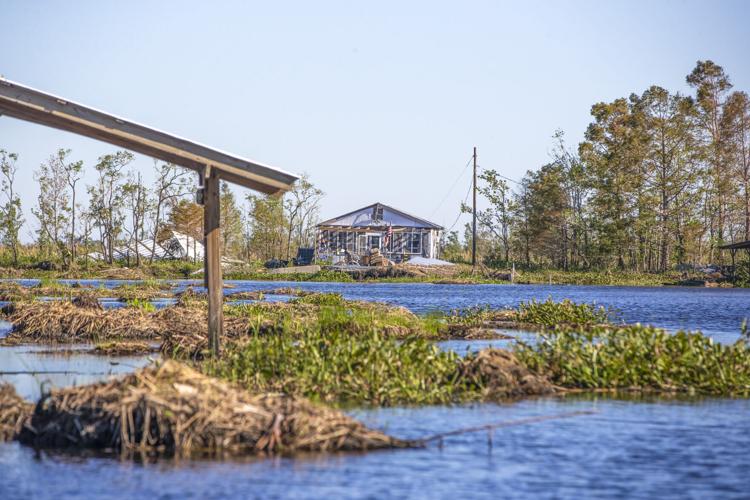 Brenda Harris and her husband, Johnny, grew up in the swamps that buffer the pine woods of Tangipahoa Parish from the north shores of lakes Maurepas and Pontchartrain.

Now retired, the Harrises lived nearly full-time at their camp of 21 years on South Pass, a quarter-mile-wide stretch of water that connects the two lakes. They liked watching Purple Martins from their porch and gazing across the prairie on a clear day. Sometimes, they’d boat around and chat with neighbors in the tight-knit community as the sun set over the swamp.

But Hurricane Ida left the couple's future at the camp uncertain.

The storm brought a 9-foot wall of water and 140 mph winds that wrenched the porch from the house, along with three of its ground-floor walls and part of a dock.

Almost two months have passed since the storm, which many in Tangipahoa Parish regarded as the most destructive since Hurricane Katrina. Yet the couple is only starting to pick up the pieces at their camp in Manchac — a working-class community of fishers, old-timers and weekenders built into a swampy stretch of lakeshore straddling Tangipahoa and St. John the Baptist parishes.

“We’re just starting the cleanup process,” Brenda Harris said, speaking from the couple's house in Ponchatoula. “We’re not able to do a whole lot, but we have someone on call. They’re supposed to go next week to get the dock fixed.”

Hurricane Ida shrieked into South Louisiana from the gulf of Mexico almost two months ago, on Aug. 29, decimating the power grid from Baton Rouge to New Orleans. Recovery work started the next day.

In nearby cities like Hammond and Ponchatoula, power was inching back by early September and trucks began hauling debris to staging areas.

That process is more cumbersome in places like Manchac, a community of about 200 secluded camps — full and part-time homes built on stilts along the swamp shore. In the buffer zone for Ida’s path up the I-55 corridor, storm surge and wind picked up whole houses and left pieces of them strewn across the swamp grass.

Hauling debris out of the swamp and returning power to the homes left standing are time-consuming ordeals because the area is only accessible by water.

A glimmer of good news came last Friday when Entergy workers restored power to 100 camps along North Pass and South Pass, according to Chris Hammons, a customer service worker for the utility company. Camps in the area endured seven weeks since the storm off the grid.

With no electricity, residents had only generators to power electric tools for fixing damaged homes. Coupled with the challenge of working without air conditioning, progress has been slow-going, said Kim Coates, a Ponchatoula-area member of the Tangipahoa Parish Council.

Entergy expects to restore power to 160 more camps still off the grid between the mouth of the Tangipahoa River and Lee’s Landing by Nov. 15. Another 20 camps north of Lee’s Landing should regain power by Nov. 25, Hammons said.

“We have a five-man crew out there with off-road and swamp equipment, and they’re working daily,” Hammons said. “They’re setting poles, picking up wire and setting up new transformers.”

Even as power returns, debris is still piled up.

A mix of matted swamp grass, shredded branches and pieces of pulverized houses lie on the banks and clog small bayous that flow into the lakes. The Galva Canal, a waterway near U.S. 51 on the St. John side of South Pass where many residents dock their boats, remains covered by knotted swamp grass the storm ripped from the ground and blew back into the channel.

Outside the levees: Despite massive projects, some feel vulnerable — particularly after Ida

Louisiana has spent billions of dollars building levees around lakes Maurepas and Pontchartrain, protecting urban and suburban areas from floo…

Debris in inland communities can simply be placed on the roadside. Manchac residents, on the other hand, have to boat theirs out, heave them into a truck bed and then drive them to a drop zone.

Coates and the Tangipahoa Parish administration are working with the Federal Emergency Management Agency to send a barge where residents could pile their debris. But she said there's no timeline for that to happen.

“There’s been a little progress, but not a lot,” she said.

Fifty miles south of Manchac, the story has been similar in the community of Bayou Segnette, a cluster of 150 camps on the southern boundary of the New Orleans metropolitan area. Like Manchac, homes there are accessible only by boat.

Power returned to most houses on the bayou in early October, said Mike Choate, a camp owner known as “Mayor Mike.”

But heaps of debris containing everything from remains of collapsed roofs and soggy mattresses to mounds of marsh grass are still stranded on properties isolated in unincorporated Jefferson Parish, Choate said.

Choate appealed to Jefferson Parish and the Edward Wisner Donation Trust, which leases land to homeowners in the unincorporated area, for help clearing trash. Jefferson Parish officials and Westwego Mayor Robert Billiot Sr. say the community lies outside their jurisdiction.

Wisner Trust land manager Amanda Phillips has likewise spoken with Jefferson Parish officials about finding a way to clear the debris mounds. But the parish is wary of spending money on debris removal that FEMA might not reimburse since the area isn't technically under their jurisdiction, she explained.

“I’m looking at how much it will cost to get someone to come in there and do it on a grant, but it’s going to take a long time,” Phillips said. “It’s not going to happen overnight.”

Without help, Choate worries the area will take years to recover.

“Everybody’s got power now," he said. “But we’ve still gotten no help at all with the trash pickup. People are dumping trash into the bayou."

In Manchac, Osman Crain hasn't been able to find a contractor to repair damage to his camp on South Pass which includes a ripped-off roof, lost pilings and a pulverized deck.

“I’m trying to get the roof back on and dry it in so that I can do repairs inside,” he said. “But it’s just painful getting to that point.”

The Harrises are leaning towards rebuilding their house, which lies a little ways east of Crain's on South Pass.

But they realize it won't happen too quickly.

“I think a lot of people will be back,” Brenda Harris said. “It’s just going to take a little while. This is something we haven’t seen before.”

A month since Hurricane Ida left Tangipahoa Parish reeling, many residents are still picking up the pieces.