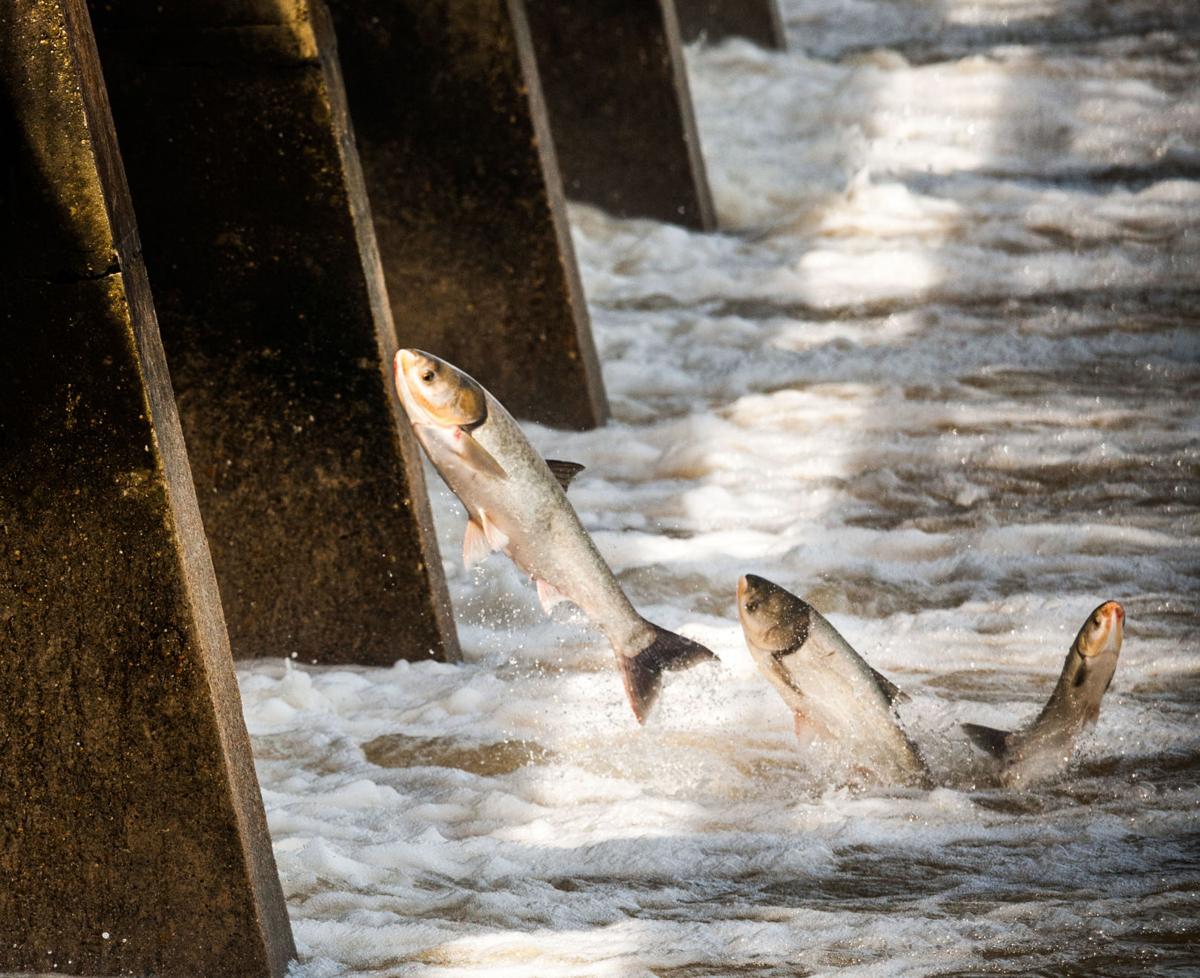 Asian carp jump out of the water at the Bonnet Carre Spillway in Norco, La., Friday, March 30, 2018. 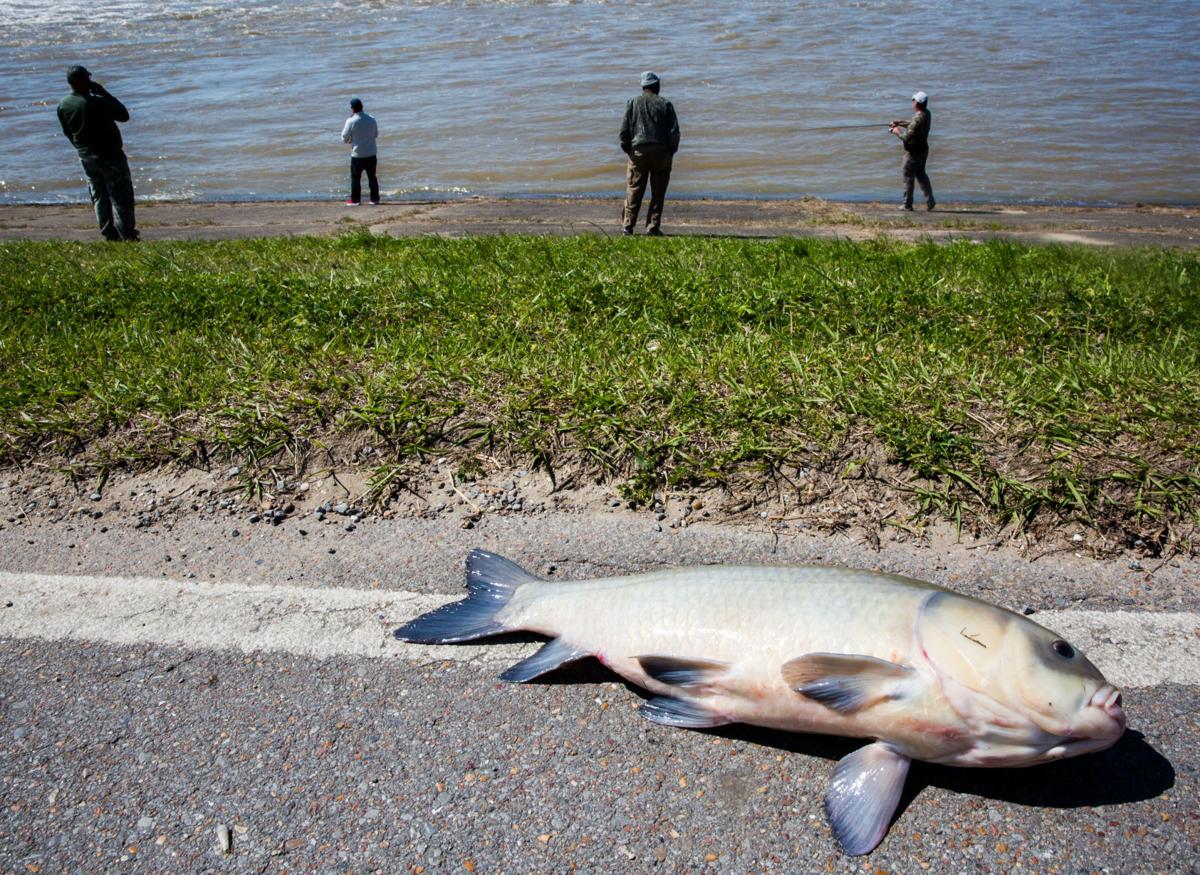 Anglers catch Asian Carp, an invasive species, at the Bonnet Carre Spillway in Norco, La., Tuesday, March 13, 2018. The spillway was opened last Thursday to relieve stress on levees along the Mississippi River. 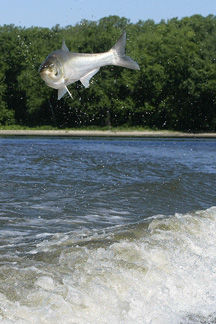 Via U.S. Fish and Wildlife Service 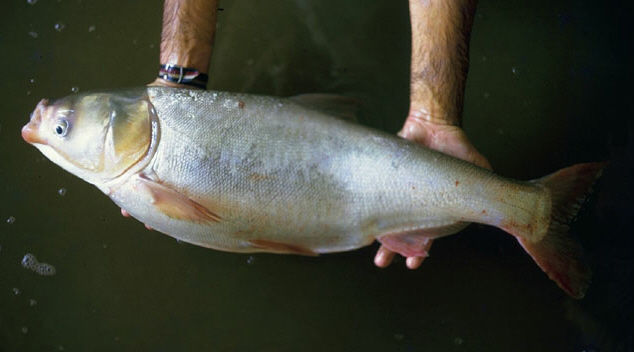 An example of a silver carp, one variety of the Asian species that have invaded North American waterways. Via the U.S. Geological Survey. 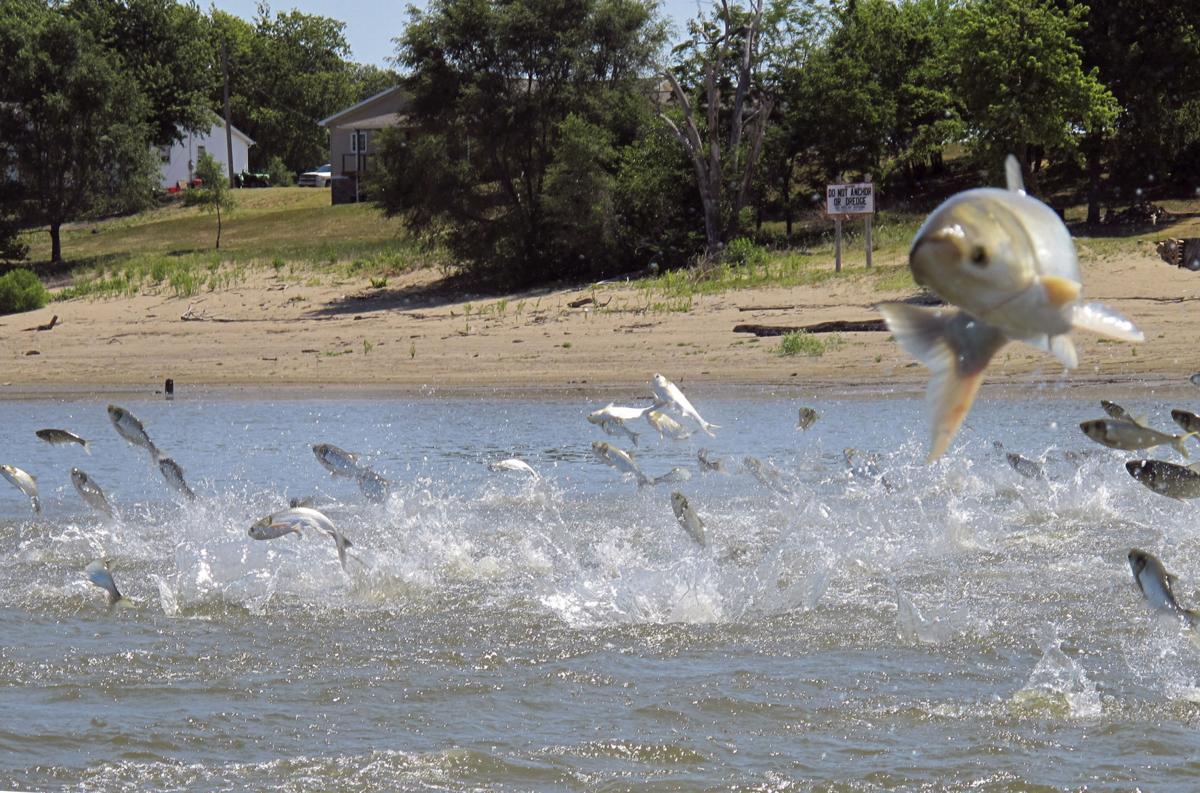 FILE - In this June 13, 2012 file photo, Asian carp jolted by an electric current from a research boat jump from the Illinois River near Havana, Ill.  (AP Photo/John Flesher, File)

Asian carp jump out of the water at the Bonnet Carre Spillway in Norco, La., Friday, March 30, 2018.

Anglers catch Asian Carp, an invasive species, at the Bonnet Carre Spillway in Norco, La., Tuesday, March 13, 2018. The spillway was opened last Thursday to relieve stress on levees along the Mississippi River.

Via U.S. Fish and Wildlife Service

An example of a silver carp, one variety of the Asian species that have invaded North American waterways. Via the U.S. Geological Survey.

FILE - In this June 13, 2012 file photo, Asian carp jolted by an electric current from a research boat jump from the Illinois River near Havana, Ill.  (AP Photo/John Flesher, File)

Skulking through the waters of Louisiana — and occasionally the air above — a notorious invasive fish that has ravaged the Upper Midwest has begun to turn from nuisance to threat.

Several species collectively known as Asian carp were brought from places like China to the U.S. starting in the 1960s to eat algae and waste in aquaculture ponds. However, they escaped from facilities in Missouri or Arkansas, said Bobby Reed, the state Department of Wildlife and Fisheries invasive species coordinator.

Infamous for jumping out of the water and colliding with boaters, the fish also threaten to edge out native fish species over food, which would knock the ecosystem out of whack.

As the fish move in, scientists, politicians and chefs are considering their options: Put a bounty on them? Electrocute them? Develop a carp disease? Deep fry them?

Asian carp are voracious eaters and prolific breeders. A single female can lay more than half a million eggs in a season, according to a paper from the LSU Ag Center. And the fish grow quickly, with some eventually reaching nearly 100 pounds over a 15-year lifespan, the paper continues.

The fish threaten to out-eat native species with which they compete for food. Asian carp have already devastated waterways in the Great Lakes region, but their numbers have grown in Louisiana as well in the decades since their  arrival.

In a 2013 and 2014 survey of the Mississippi, Atchafalaya, Ouchita and Red rivers, 14 percent of all young fish fry were Asian carp, Reed said. And they can survive everywhere, from hard water to soft water, even brackish areas. Carp have even shown up in Vermillion Bay and Lake Pontchartrain after the Bonnet Carré opens, Reed said.

The fish prefer to reproduce in hard fresh water like the Mississippi. But even if they don't spawn in soft or salty water, adults still eat the plankton that could feed the native species.

"Our concern here ... is that they take a place in the food web that has ramifications not just for the freshwater but for the coastal estuaries," said Glenn Constant, project leader for the U.S. Fish and Wildlife Service's Baton Rouge office.

One possible response to the problem of Asian carp comes from chef Philippe Parola. For years, he's sought to rebrand the fish as silverfin and sell it to restaurants. Earlier this year, he got his first batch of product after fishermen caught 100,000 pounds of carp in the Tensas River.

The problem with the carp is that it's so bony it can't be served as a fillet. So Parola serves it as a cake. However, picking out the bones is a laborious process so the fish must be shipped to Vietnam where labor is cheaper, then back to the States. The fish has a mild, slightly sweet taste and is meant to be served with sauce, like remoulade.

Silverfin is a passion project for Parola, who believes that carp can't be managed unless it can be harnessed as a consumer product — a strategy that will also boost the local fishing industry.

The chef sees the invasive carp as a serious menace that threatern to destroy the entire ecosystem if not brought in check.

"We are doing something. We are addressing this," Parola said. "This is the beginning of the only solution available to us."

Congressman Clay Higgins also wants to turn to the state's fishermen and has asked Wildlife and Fisheries Secretary Jack Montoucet to consider a bounty program similar to the one used to cull nutria.

"A similar program for reducing Asian carp could prove invaluable to Louisiana's ecosystem and economy," Higgins wrote in a letter to Montoucet. "In conjunction with efforts to further commercialize the Asian carp as a food product, a bounty program will be effective at ensuring that Louisiana's Asian carp population does not reach critically harmful levels."

Montoucet has been receptive to the idea but warned that it would be an expensive fight, and that he'd need Louisiana's congressional delegation to secure federal funding to pay for such a program.

State and federal authorities as well as conservationists hope Parola succeeds but express doubt about the viability of Asian carp as table fare and, therefore, whether commercial fishing could put a dent in the numbers. Perhaps the fish could be used as bait or animal feed as an alternative, they have speculated.

However, the government hasn't been able to come up with workable solutions either.

Carp have evolved to be incredibly sensitive to potential threats and are unusually skittish, so by the time agents get close, the fish are already running away or jumping through the air, making them difficult to catch, Reed said.

Pesticides and electrical shocks have collateral damage, and nets have a hard time handling the large rivers where the carp like to live, since Mississippi River debris can include whole trees that tear the equipment to shreds, he continued.

Scientists have genetically modified insects so they produce sterile offspring, and there's an interest in doing the same for carp, though it's never been performed on a fish species, he continued.

Constant, of the U.S. Fish and Wildlife Service, said the Upper Midwest uses electrified underwater fences. However, Louisiana waterways are so connected, it would be a mess trying to maintain gates everywhere, he said.

Scientists are working on an electrified trawl to catch the fish, though plans are still in the works. There also have been conversations about creating a pathogen that strikes down carp, though starting biological warfare against carp obviously introduces more ethical concerns, Constant continued.

"We don't have a silver bullet," he said. "Basically, collecting more baseline information is where we are now."

North Louisiana caviar could be the next boom industry in the Bayou State, according to one seafood company, but conservationists worry non-na…