Louisiana's health chief is resigning at the end of the month.

Gov. John Bel Edwards said in a statement Monday that Gee, secretary of the Louisiana Department of Health, is taking a new job, which will be announced at a later date.

She's the second person to announce plans to exit the Edwards administration as it is about to begin its second term next week. Maj. Gen. Glenn Curtis, who headed the Louisiana National Guard's adjutant general, announced he is retiring on Jan. 10. 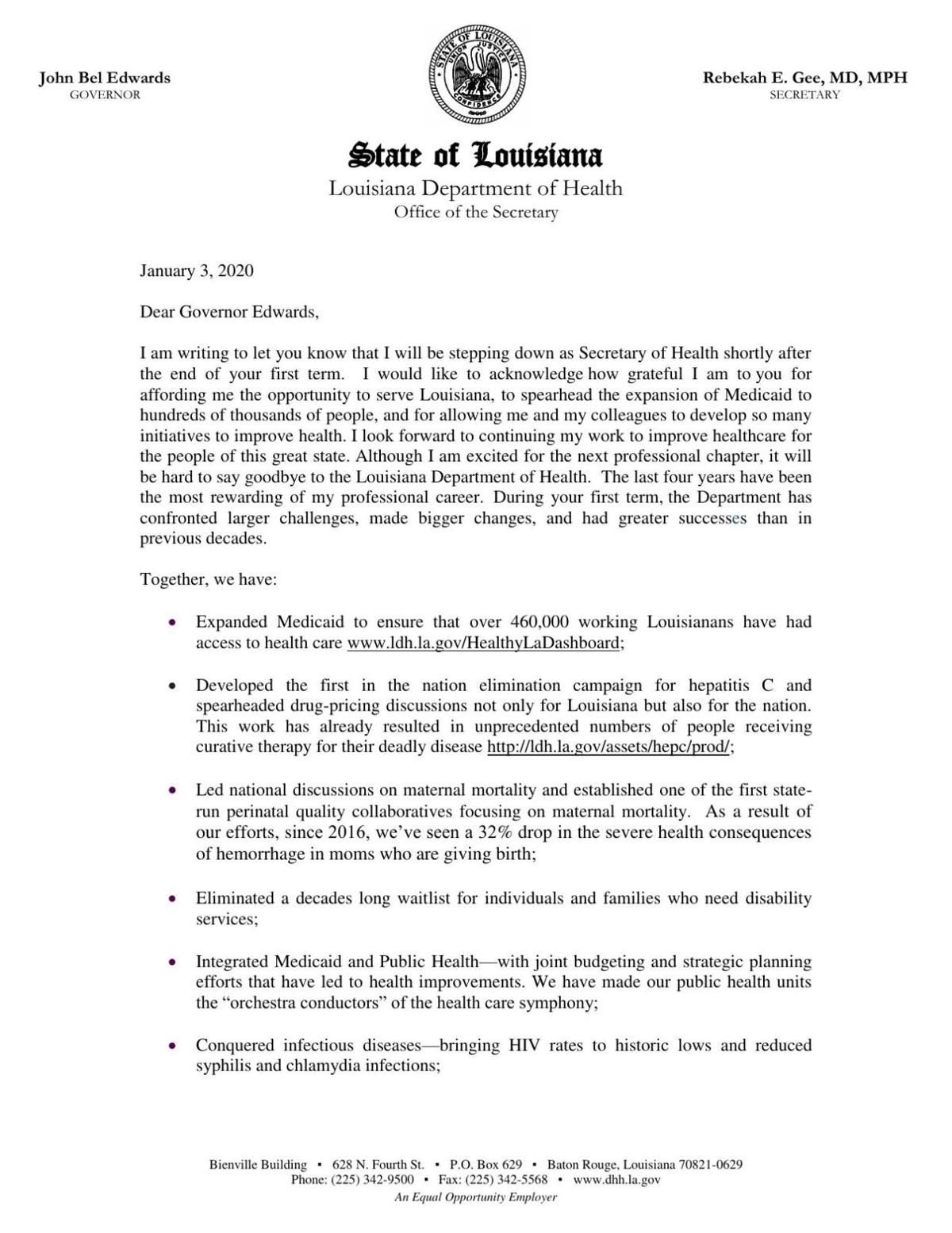 Gee was a lightening rod for conservative Republicans of Democratic Gov. John Bel Edwards. She was regularly excoriated before legislative committees about spending at the $15 billion agency, the largest department in state government, amid allegations that LDH wasn't strict enough when ensuring eligibility for Medicaid enrollment.

Republicans were cheered by the news after what Louis Gurvich, chairman of the Republican Party of Louisiana, called “four years of ruinous mismanagement."

Gurvich urged the governor to appoint someone who, like Edwards, opposes abortion rights.

“Only a capable and hard-working full-time administrator who will improve our quality of life, create a healthcare system that is sustainable over the long-term, and enforce the right to life for our unborn children, will be acceptable,” Gurvish said in a statement.

Senate Health & Welfare Committee Chairman Fred Mills, R-Breaux Bridge, said the post was an unforgiving one that requires many hours of work per day on extremely complex issues with lots of criticism and very few attaboys.

“I enjoyed working with her,” Mills said Monday. “She had a tremendous passion that all Louisianans receive primary and preventative healthcare.”

Edwards praised her work in expanding Medicaid to working people who made too much money to qualify for the government-paid insurance but too little to buy health coverage on the private market.

"On my first day in office, I signed an executive order expanding Medicaid and since day one Dr. Gee has been on the front lines of this transformational improvement to health care in Louisiana," Edwards said in a statement. ”Under her leadership, we brought health care to more than 460,000 hard-working adults who now have access to the medical services they need to live healthier lives, to fight chronic illness and, in some cases, survive."

Since taking the helm of the Louisiana Department of Health nearly three years ago, Dr. Rebekah Gee has served as a lightning rod for critics …

Since Edwards' January 2016 order, Gee was the face of expanded Medicaid, which while optional was a very visibly link to the federal Affordable Care Act that Republicans opposed.

Gee has offered advice to other states related to Louisiana's quick implementation. She often credits the expansion for improved state health outcomes and a drastic drop in the state's uninsured rate.

Gee’s Medicaid Director Jen Steele left her post in late December and will officially retire Feb. 14. While LDH conducts a nationwide search, Erin Campbell, Steele’s assistant, is the interim head of the office that oversees Medicaid, which is the largest single state expenditure.

“The governor has a substantial rebuilding in store of that Medicaid program,” said Randal Johnson, a Baton Rouge lobbyist and health consultant. “This will be the governor’s opportunity to recaliberate Medicaid.”

One of the first issues a new secretary will have to handle are the massive contracts to provide services for the 1.5 million Medicaid enrollees. Earlier this year, Gee’s health department selected Humana, a newcomer to Louisiana’s Medicaid program, and kicked out Aetna and LHCC, a subsidiary of insurance giant Centene Corp.

LHCC and Aetna appealed the decision, which is being considered by the Office of State Procurement. A decision is expected Jan. 17. The appeal would then go to the Division of Administration before heading for judicial review in state district court.

Johnson, who represents LHCC, said regardless of how the appeal turns our he would want to meet with the incoming secretary about the issue.

"The policies we advanced will continue to move the needle – policies that will result in more children growing up healthy, and mothers who can watch them grow, more individuals with disabilities living independently, and more families thriving,” Gee said in a prepared statement.

Under Gee’s tenure the state saw declines in sexually transmitted diseases, including HIV; a renewed focus on maternal mortality resulted in a 32% drop in severe health consequences of hemorrhage in moms who are giving birth; and the elimination of a waiting list for services for people with developmental disabilities, according to Edwards' statement.

She recently was recognized by a New York Times columnist as one of five people who “spread hope in 2019” for her work spearheading an innovative way to pay for hepatitis C treatment.

The program's funding is called a “Netflix-style” model with Asegua Therapeutics, a subsidiary of pharmaceutical giant Gilead, whereby the state pays about $58 million a year for unlimited access to Hep C drugs. Medicaid patients and people in the state’s prison system get the drug free through the arrangement.

“I look forward to remaining in this great state and continuing my work of improving the lives and healthcare of all our residents,” Gee said.

Gee is a medical doctor who practices in New Orleans and saw patients on a pro bono basis -- without charge. She is an obstetrician/gynecologist, which are physicians who deliver babies and treat diseases of the female reproductive organs.

She had been state Medicaid director before the governor chose her to run the agency.

Some objected to her appointment to Health secretary job because Gee, an OB-GYN, once gave a speech at a "Pro-Choice Massachusetts" meeting.

As late as the November election, Gee was working legislators on a possible bill that would prohibit establishing free-standing emergency rooms without the department’s approval. The privately owned treatment centers often are built next to hospitals with the goal of siphoning off some of the patients. In what is a politically contentious issue, legislators negotiated a deal that would forbid the emergency rooms near rural hospitals, which don’t have the finances to absorb additional competition. Gee had spreadsheets and was looking for support to extend the prohibition statewide unless the applicant passed an LDH analysis of whether the additional facility is needed.

Several legislators and staffers suggested Dr. Courtney N. Phillips, who currently is the executive commissioner of Texas Health and Human Services, might be considered. She worked for the Louisiana health department for a dozen years after receiving her graduate degrees at LSU and Southern University. Also, former secretary Dr. Fred Cerise was mentioned. He has been head of Parkland Hospital in Dallas.