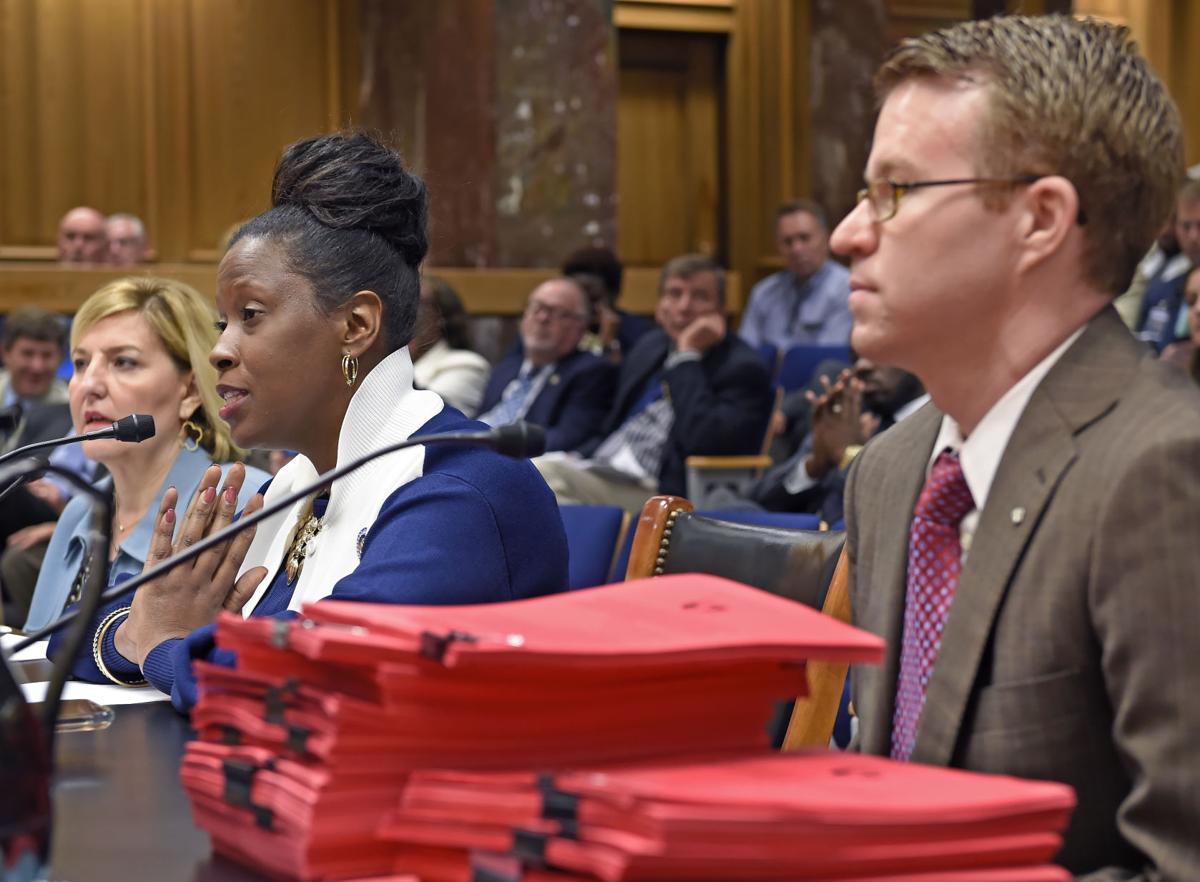 Then-state Rep. Katrina Jackson, D-Monroe, center, speaks during a 2019 hearing at the State Capitol on a proposed Constitutional amendment that would outlaw abortion in Louisiana if the Supreme Court overturns Roe v. Wade. Jackson is flanked by Dorinda Bordlee, with the Bioethics Defense Fund, left, and Benjamin Clapper, executive director Louisiana Right to Life, right. 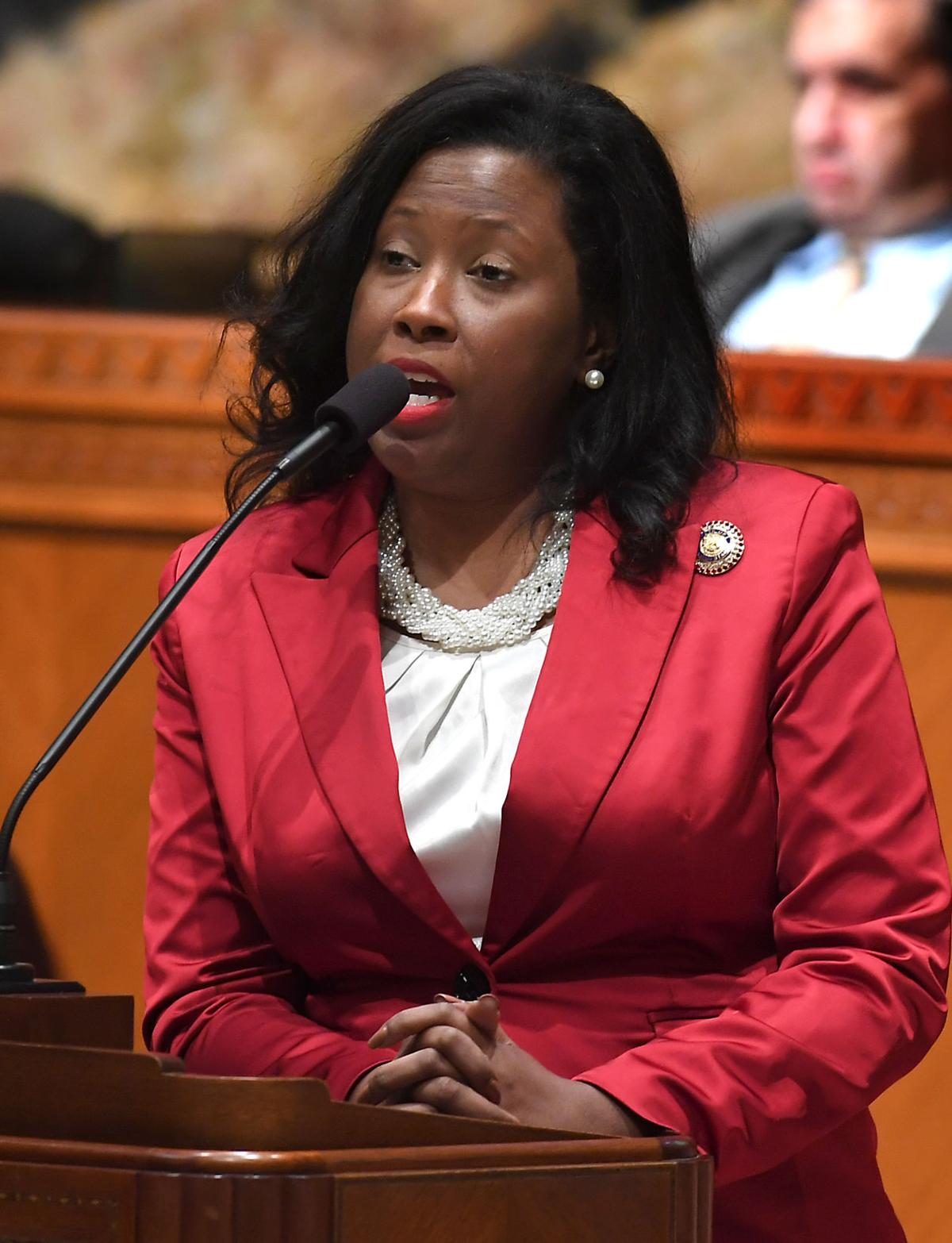 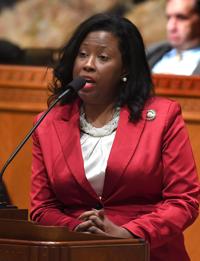 Then-state Rep. Katrina Jackson, D-Monroe, center, speaks during a 2019 hearing at the State Capitol on a proposed Constitutional amendment that would outlaw abortion in Louisiana if the Supreme Court overturns Roe v. Wade. Jackson is flanked by Dorinda Bordlee, with the Bioethics Defense Fund, left, and Benjamin Clapper, executive director Louisiana Right to Life, right.

Throughout her eight years in the state Legislature, the Monroe Democrat has been a leader in the Legislative Women's Caucus and Legislative Black Caucus. She's made impassioned pleas for restoring voting rights to convicted felons. She has sided with gun restrictions. She's joined efforts to abolish the death penalty. And she supports increasing the state’s minimum wage -- just to name a few of the positions she shares with the more liberal wing of her party.

But when it comes to abortion, she’s established herself as a leading voice —not just on the state level but on a national stage — in the fight to bring an end to what she has said she considers "a modern-day genocide."

Supreme Court to take up Louisiana abortion law this week; Both sides say it could have national impact

WASHINGTON — Louisiana is set to play a pivotal role in the future of abortion access in the country, as the U.S. Supreme Court takes up its f…

Her efforts, championed by then-Gov. Bobby Jindal, have now made it to the U.S. Supreme Court by way of a 2014 law that would require abortion providers in Louisiana have admitting privileges at a local hospital. The court is set to hear oral arguments in the case on Wednesday, with Jackson, the legislation's author, in attendance.

For the second year in a row, Jackson was a speaker at the March for Life rally in Washington D.C., one of the largest anti-abortion events each year.

Multiple attempts to interview Jackson, 42, were unsuccessful, but those close to her describe her as having a deep commitment to "pro-life" causes.

“She’s a really courageous and smart woman – I just have so much respect for her integrity,” said Kristen Day, executive director of Democrats for Life.  “Being a pro-life Democrat can be a terribly lonely road to take — she’s so steadfast and vocal about it.”

“Katrina is a very pro-life legislator – she’s a great person,” he said. “We’re hopeful for a good Supreme Court decision.”

WASHINGTON — Louisiana is set to play a major role in the abortion debate when the U.S. Supreme Court takes up challenges to a 2014 state law …

Jackson, who often dresses in brightly-colored blazers and sparkling statement necklaces, is known in the Legislature for a near-constant smile and her good-natured ribbing of fellow lawmakers – especially ones whose bills she plans to speak against. But she also uses her chops as a lawyer to forge paths for her priorities and Republicans describe her as a tough negotiator.

Her fellow Democrats who oppose the tougher abortion restrictions often tip-toe around direct criticism of her role in its passage.

“This Supreme Court case is just the latest way to try to dismantle Roe v. Wade as the law of the land,” said Sen. Karen Carter Peterson, a New Orleans Democrat who is also in the state Senate. “Every woman should be able to receive reproductive health care without government interference, and we should be making it easier for women to receive the care they need, not harder.”

After Jindal signed the 2014 law, the New Orleans Abortion Fund released a statement criticizing both Jindal and Jackson for the "audacity to celebrate its signing."

The argument behind the admitting privileges law is that it will make the abortion safer. It passed with bipartisan support the House on an 88-5 vote and the Senate 34-3. During the little debate it received, it was never openly championed as a potential step in taking down the landmark 1973 Roe v. Wade ruling.

Unlike neighboring Texas, which passed a similar law the year before, the measure didn't prompt raucous protests or 13-hour filibusters.

But if the court rules in favor of Jackson's bill, both sides agree it could set off a wave of anti-abortion laws in other states, including changes to waiting periods and how late into a pregnancy it can be terminated. Louisiana currently bans abortions after 20 weeks and requires a 24-hour wait between an initial doctors visit and the procedure.

“In Louisiana, the majority of Democrats who are elected are pro-lifers," Jackson told the 2020 March for Life crowd in January. "Everyday that I walk into the State Capitol, I’m greeted by pro-lifers regardless if they are black, white, Republican, Democrat, male or female, because we know in unity we have to fight like we’ve never fought before.”

Jackson, who regularly receives positive feedback on her official Facebook page from people who share her views on abortion, spoke of her belief that this decade will mark an end to abortion. During the 2019 legislative session and at Jackson's urging, the Legislature agreed to let voters decide this fall whether abortion should be outlawed in Louisiana if the Supreme Court upends Roe.

“We will never stop; it’s just that important,” she said at the March for Life. “It’s the most important thing we could ever fight for in our lives.”

WASHINGTON — Liz Murrill, Louisiana's solicitor general, stood in front of the nine justices of the U.S. Supreme Court Wednesday to defend a s…