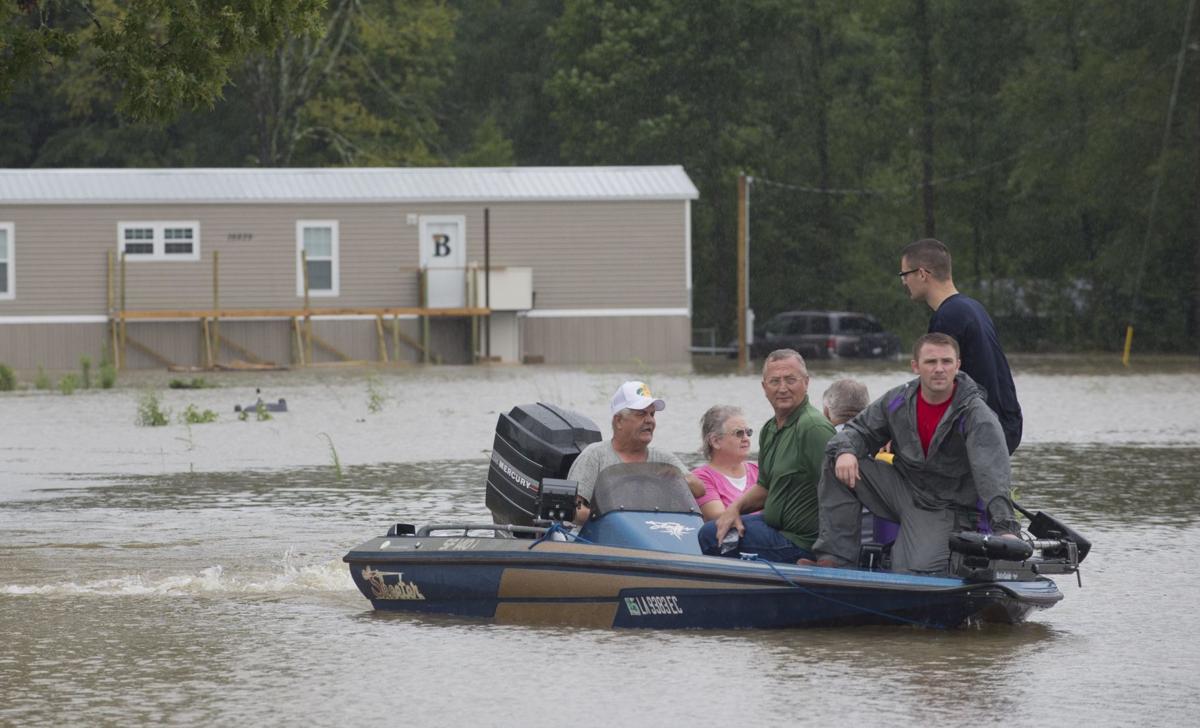 Libby Bezet, 65, in pink, and her husband Danny Bezet, 67, in gray, are helped off a rescue boat, piloted by Danny Wall, in white cap, helped by Alan Bartlett (in g of Central Baptist Church, which is near the trailer, background that the Bezets lived in off Stevendale Road near Florida Blvd. just on the west side of the Amite River, Sat., Aug. 13, 2016 during flooding there. Healing Place Church's Kain Worthy, looks at landing site, and David Napuunoa is standing behind him.

A rescue truck pulls a boat up Range Avenue in Denham Springs. Aerials of severe weather flooding in Livingston Parish on Monday August 15, 2016. 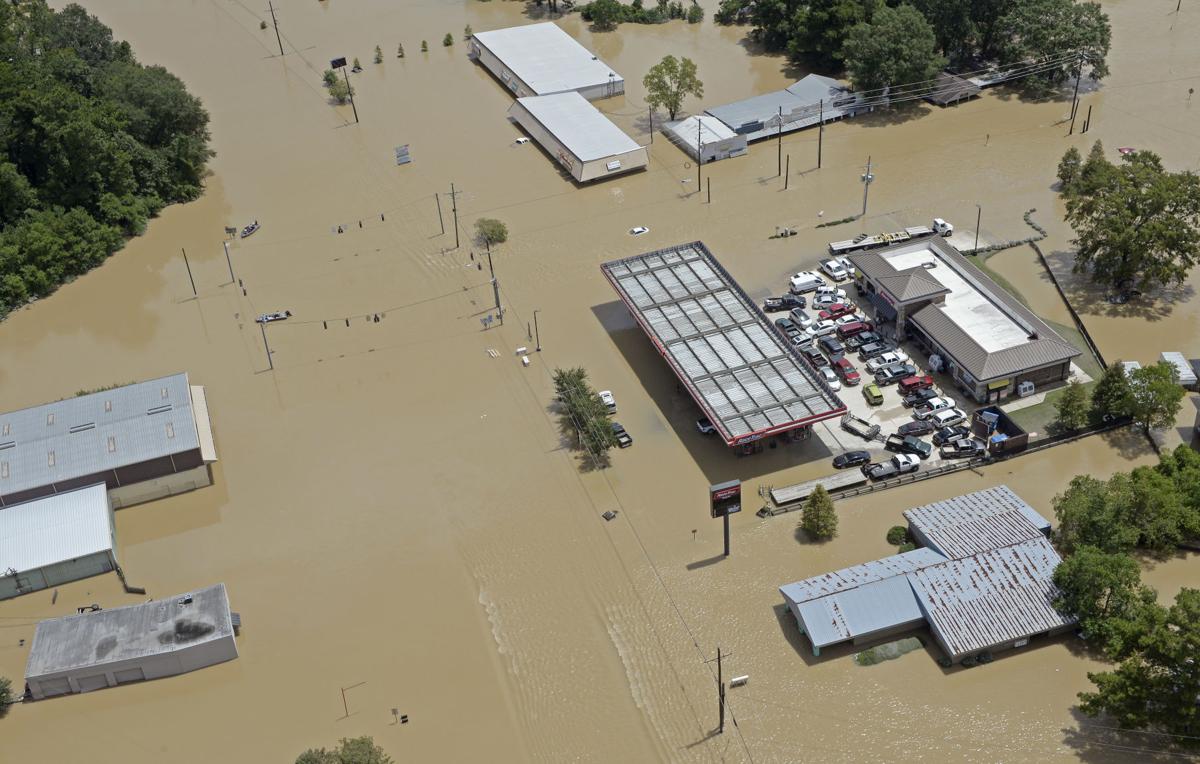 Libby Bezet, 65, in pink, and her husband Danny Bezet, 67, in gray, are helped off a rescue boat, piloted by Danny Wall, in white cap, helped by Alan Bartlett (in g of Central Baptist Church, which is near the trailer, background that the Bezets lived in off Stevendale Road near Florida Blvd. just on the west side of the Amite River, Sat., Aug. 13, 2016 during flooding there. Healing Place Church's Kain Worthy, looks at landing site, and David Napuunoa is standing behind him.

A rescue truck pulls a boat up Range Avenue in Denham Springs. Aerials of severe weather flooding in Livingston Parish on Monday August 15, 2016.

Louisiana leaders hailed movement on a federal flood relief package on Thursday as a "really big win" for the state, but Democrats in Congress already are signaling opposition to the GOP-backed short-term spending plan that would provide up to $500 million in flood aid.

After days of negotiations this week, the temporary budget proposal ultimately unveiled by Senate Majority Leader Mitch McConnell, R-Kentucky, would prevent a government shutdown on Sept. 30 and keep the federal government afloat until a longer-range plan can be crafted in December.

Tucked into that proposal is $500 million for states that have suffered major natural disasters this year — the bulk would be expected to go to Louisiana, which suffered catastrophic floods last month that killed 13 people and left thousands displaced.

"It's a fair proposal," McConnell said after the ongoing back-and-forth between Republicans and Democrats resulted in no formal deal.

But Democrats quickly cried foul and signaled their opposition to McConnell's stop-gap budget proposal, formally known as a continuing resolution, leaving its fate uncertain as the nation edges closer to the shutdown deadline.

In recent days, funding for the Louisiana flood became intertwined with the Democrats' desire to provide funding for Flint, Michigan's drinking water crisis. Money for Flint isn't included in McConnell's proposal. Senate Democrats have loudly voiced their disappointment, indicating they may be willing to risk a shutdown over the fight.

La. flood aid on the line in D.C. as Democrats push for money to aid Flint water woes

Leaders of the U.S. Senate and Congress continue to try to work funding for Louisiana's floo…

"We are not — I am not — going to support an effort that says to the people of Flint, 'You don't count. Your child doesn't count. We care about people in Louisiana. They count, but people in Flint, Michigan, don't,'" U.S. Sen Debbie Stabenow, D-Michigan, said tearing up on the Senate floor. "I'm happy to support Louisiana, but the help for Louisiana and the help for Flint need to be done the same."

U.S. Sen. Barbara Milkulski, a Maryland Democrat who serves as the minority party's top appropriator in the Senate, said flatly that Democrats "can't vote" for the proposal McConnell has put forth.

"We know that the people of Louisiana have been hit by the terrible floods," she said. "We don't want to just give lip service in response to their need, but Louisiana is not the only need in America, and we believe that the people of Flint, Michigan, should be included in the continuing resolution."

That leaves the immediate flood aid package for Louisiana somewhat up in the air, even as the state's leaders laud Thursday's action as a victory.

The continuing resolution has been identified as the fastest way to get flood money for the state before Congress recesses this month. Lawmakers won't return to D.C. until December, after this fall's elections.

U.S. House Majority Leader Steve Scalise, R-Jefferson, said he sees the flood aid in the continuing resolution as a "down payment" on flood relief that would signal additional aid is coming. He said he's confident the state would be in line for more recovery assistance when Congress returns in a so-called "lame duck" session after the November elections.

"We got a really big win today, we've just got more work to do," Scalise said. "We're moving fast, but working hard because we think it's important that we get this down payment that shows that Congress will help people get back into their homes."

U.S. Sen. Bill Cassidy, R-Baton Rouge, similarly described the $500 million in McConnell's proposal as a "down payment" on future flood relief that would be coming later.

"It's a great start," he said. "This obviously gets things going."

Officials have estimated that the Louisiana floods caused at least $8.7 billion in damage, and nearly 126,000 homes were damaged or destroyed.

Officials are seeking federal recovery aid that would be in addition to what the federal government has already committed to Louisiana's recovery and on top of the 90-10 FEMA reimbursement match for relief efforts.

The flood relief dollars proposed in the continuing resolution, which senators will have for four days before votes are cast and then it heads to the U.S. House, would largely go toward creating a long-term housing recovery plan. FEMA efforts only cover temporary housing efforts, such as bare-bones Shelter at Home repairs or 18-month mobile home or rental assistance.

In addition to the August floods, the additional federal flood relief would also be used for recovery for north Louisiana, which experienced mass floods in the spring.

Gov. John Bel Edwards, a Democrat who traveled to Washington, D.C. this week to continue lobbying for flood aid, met with Cassidy and McConnell Thursday morning before the latest proposal was revealed. Despite the apparent pushback from some in his own party, Edwards, in a statement, remained optimistic that money will come. This week marked Edwards' third trip to Washington to rally support for federal flood aid.

“Historic flooding has uprooted homes and communities in every corner of our state,” Edwards said in a statement. “Make no mistake, this is a down payment from the federal government on our recovery needs, and I am hopeful and optimistic that the final (concurrent resolution) passed by Congress will include this assistance. I look forward to working with Congress in the coming months to address Louisiana's long-term flood relief."

Cassidy stressed that he's confident money will come — either now or later, but he said hopefully both.

"We're not through yet," Cassidy said. "Many in Louisiana in the affected areas are still desperate for help."

He said he believes Flint could secure money through another avenue, would almost assuredly be funded in December and should not be tied to Louisiana's flood aid.

"(Democrats) are pushing back because they want the money for Flint," he said.

Flint, a poverty-stricken city with about 99,000 residents, has been dealing with lead-contaminated drinking water for two years.

Railing against Louisiana's inclusion in the stop-gap funding proposal without Flint funding, Stabenow, the Michigan Democrat, said Louisiana should also have to wait until December if Flint does. Louisiana's funding "adds insult to injury" of Flint's exclusion, she said, adding that it wasn't her intention to "(pit) communities against each other.

Scalise said that he has seen "universal agreement" that support is needed for immediate flood recovery, to the point that it makes sense to put it a "must-pass bill" like the continuing resolution. He said he doesn't believe that consensus exists for Flint yet, though, and that it's on Michigan leaders to focus on Flint and build a similar support.

"There's still a lot of negotiations on Flint," he said.

Why residents in BR's poorest areas could face slower, tougher rebuild after floods

Cross the threshold of the house on Ritterman Avenue and the floor sags underfoot. With the home stripped to its shell, it's possible to peer …

La. flood aid held up in U.S. Senate amid fight over Flint funding as shutdown looms

The people of Louisiana have suffered terribly since the August flood, and time is of the essence for Congress to send a $500 million aid pack…