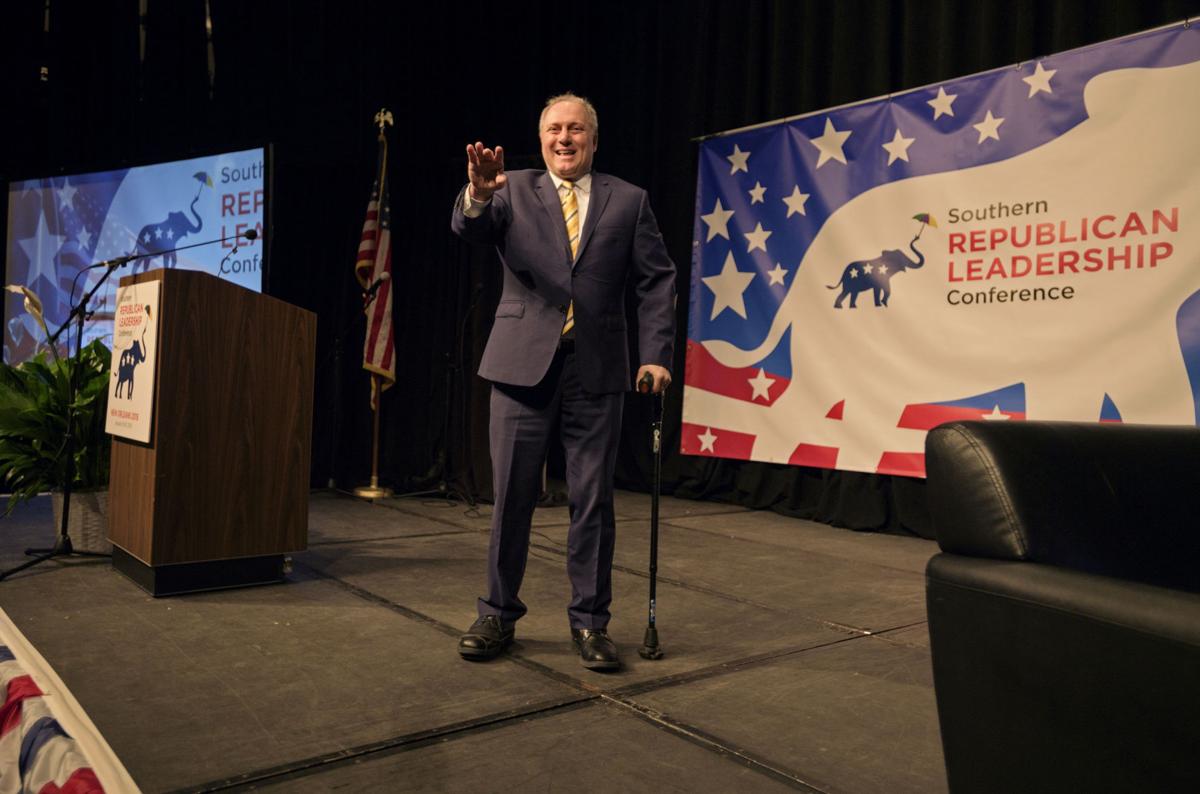 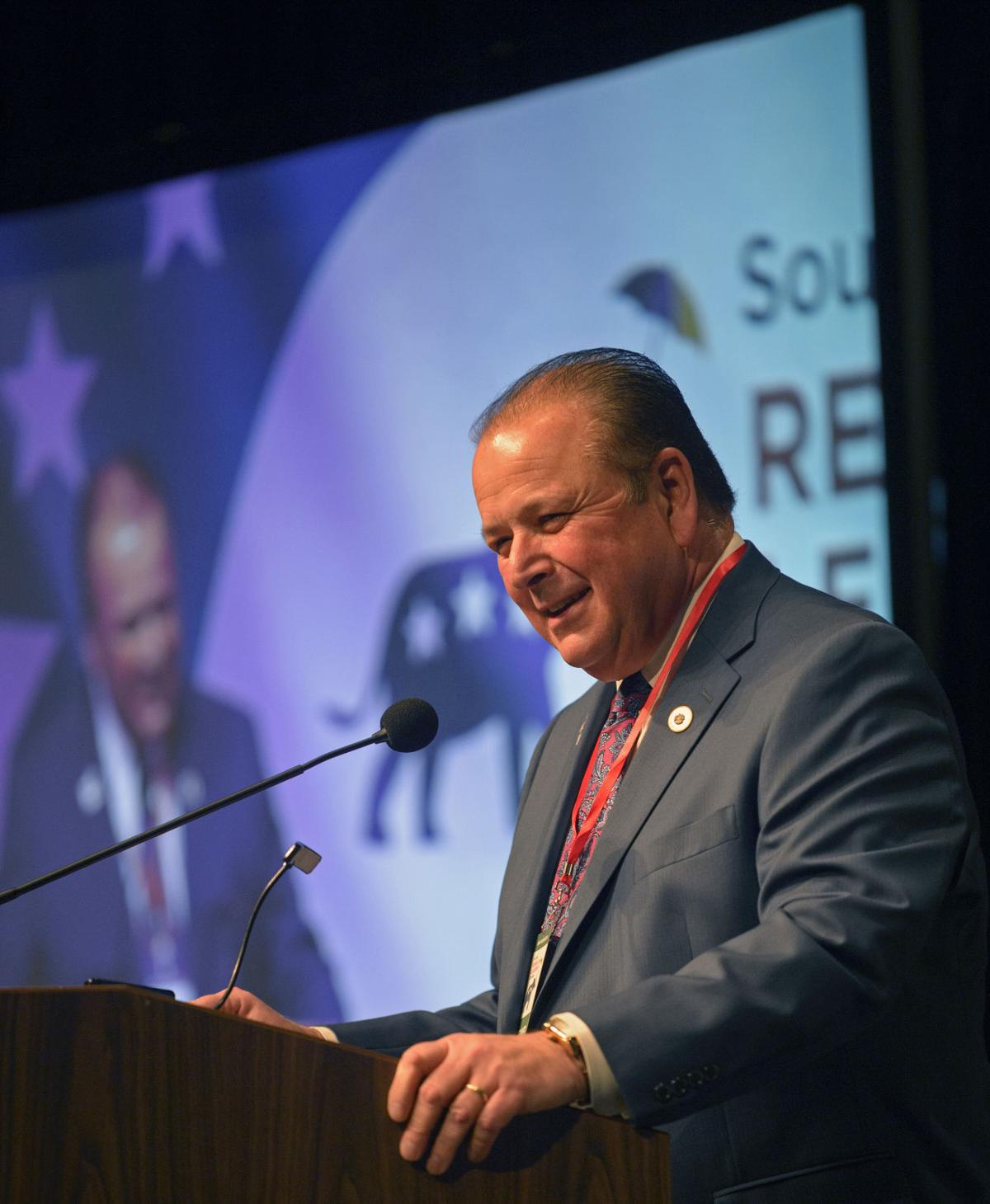 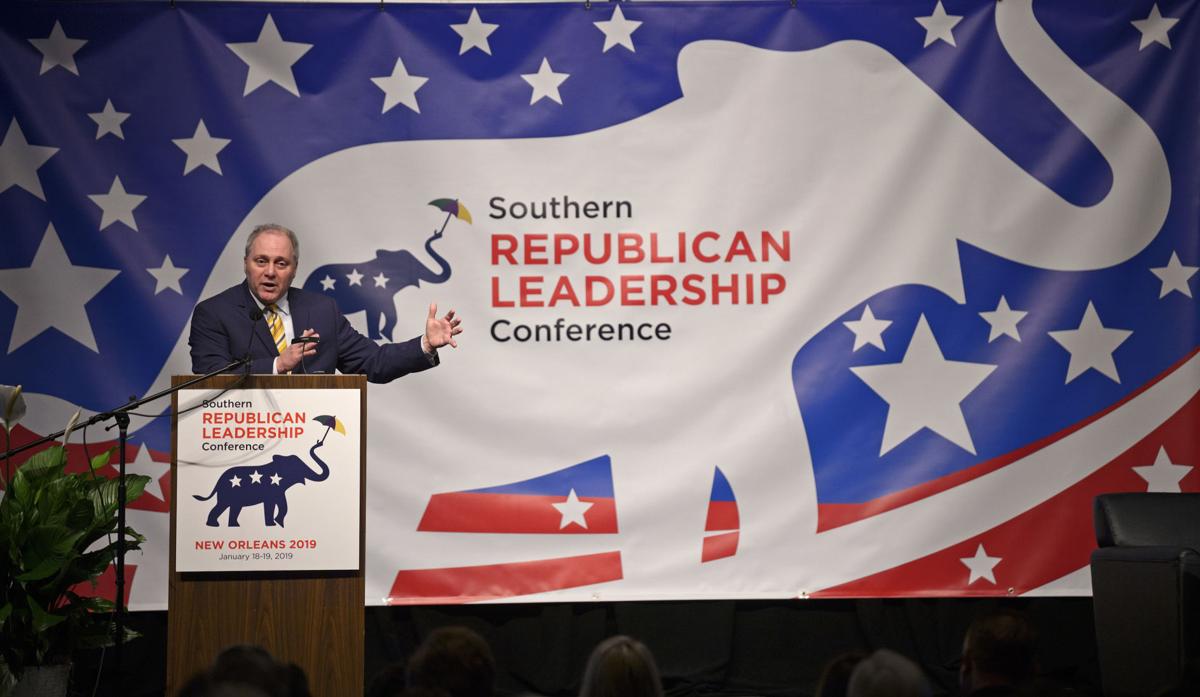 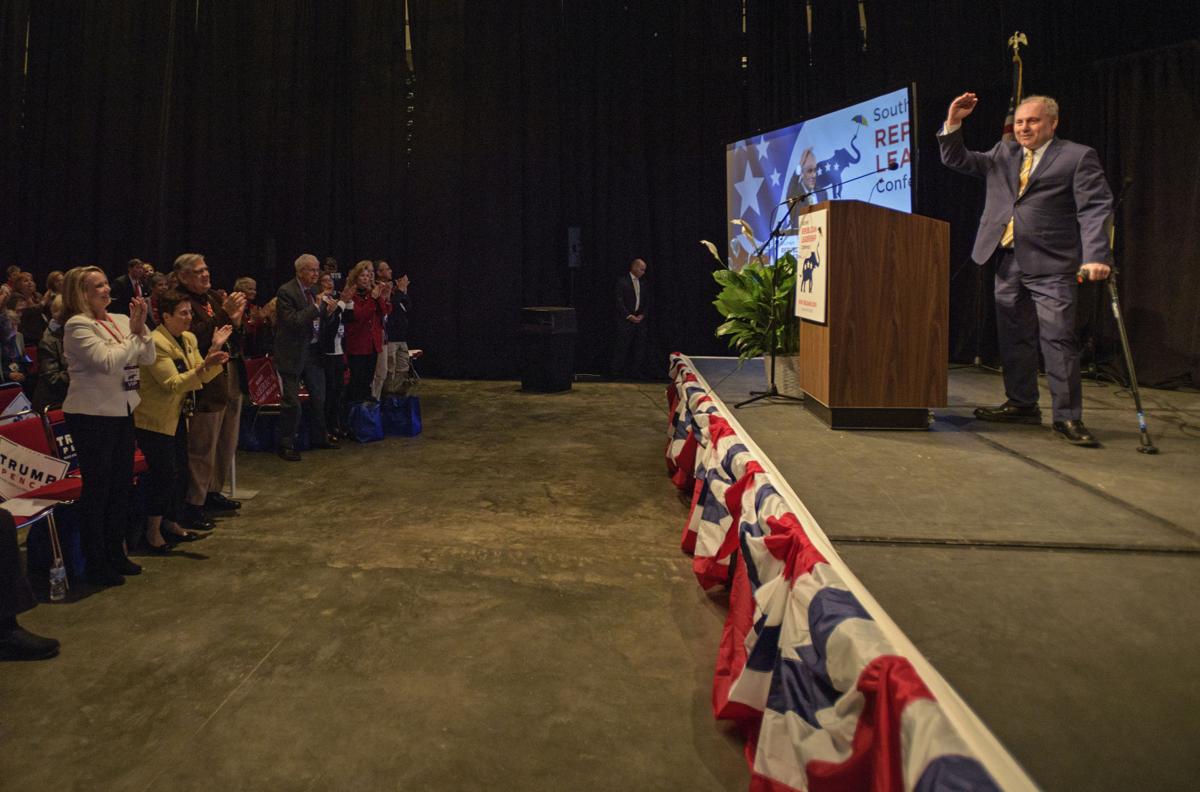 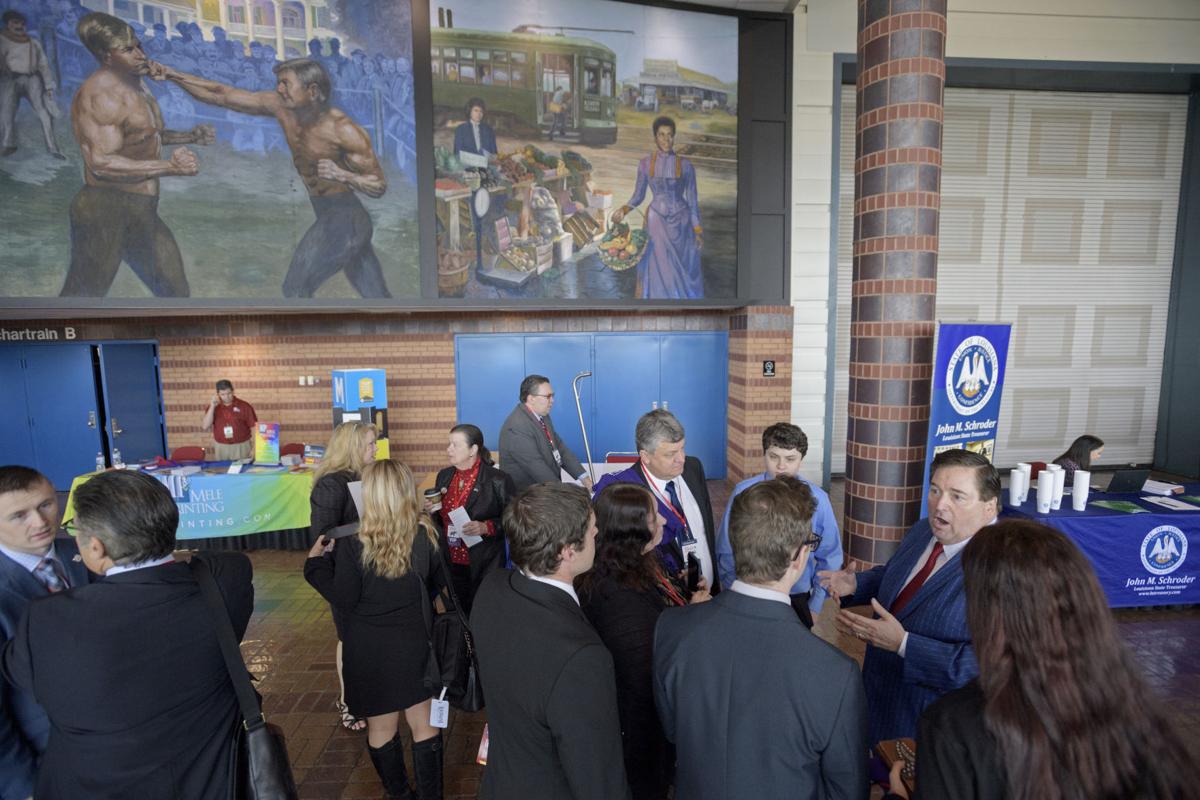 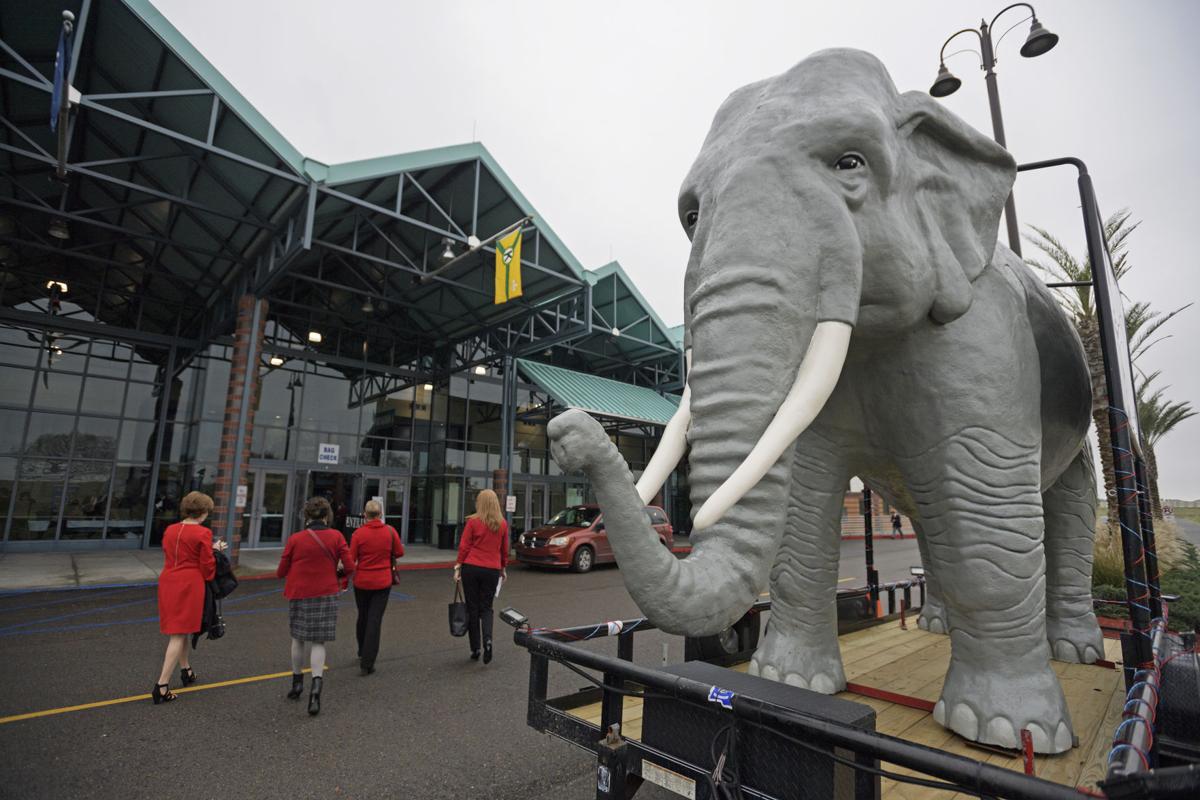 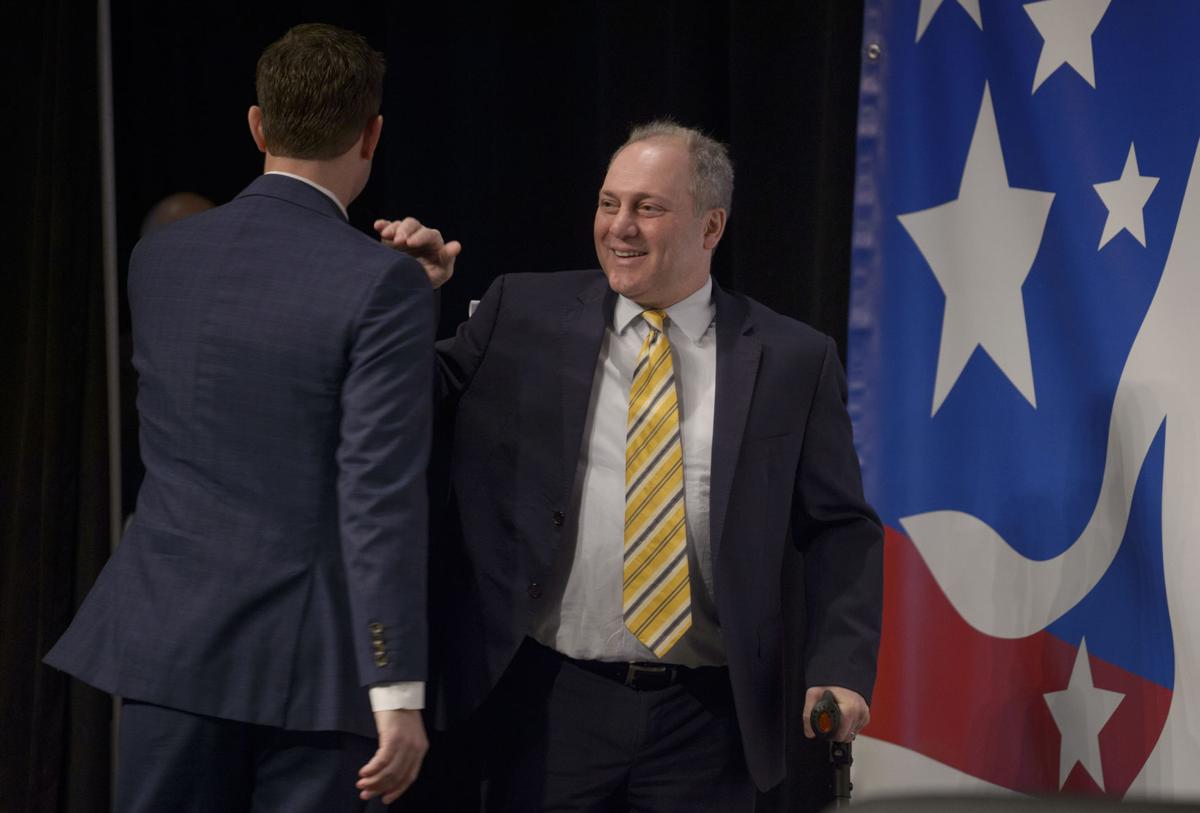 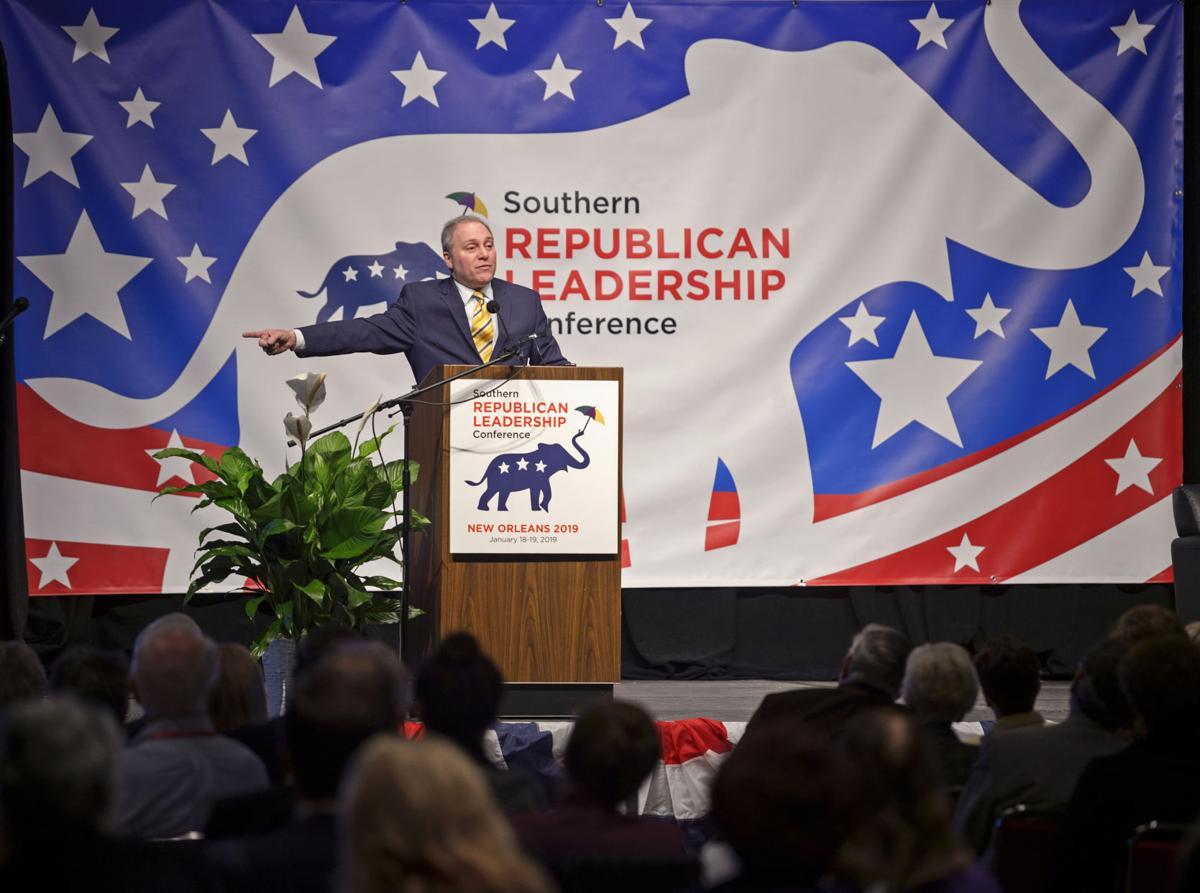 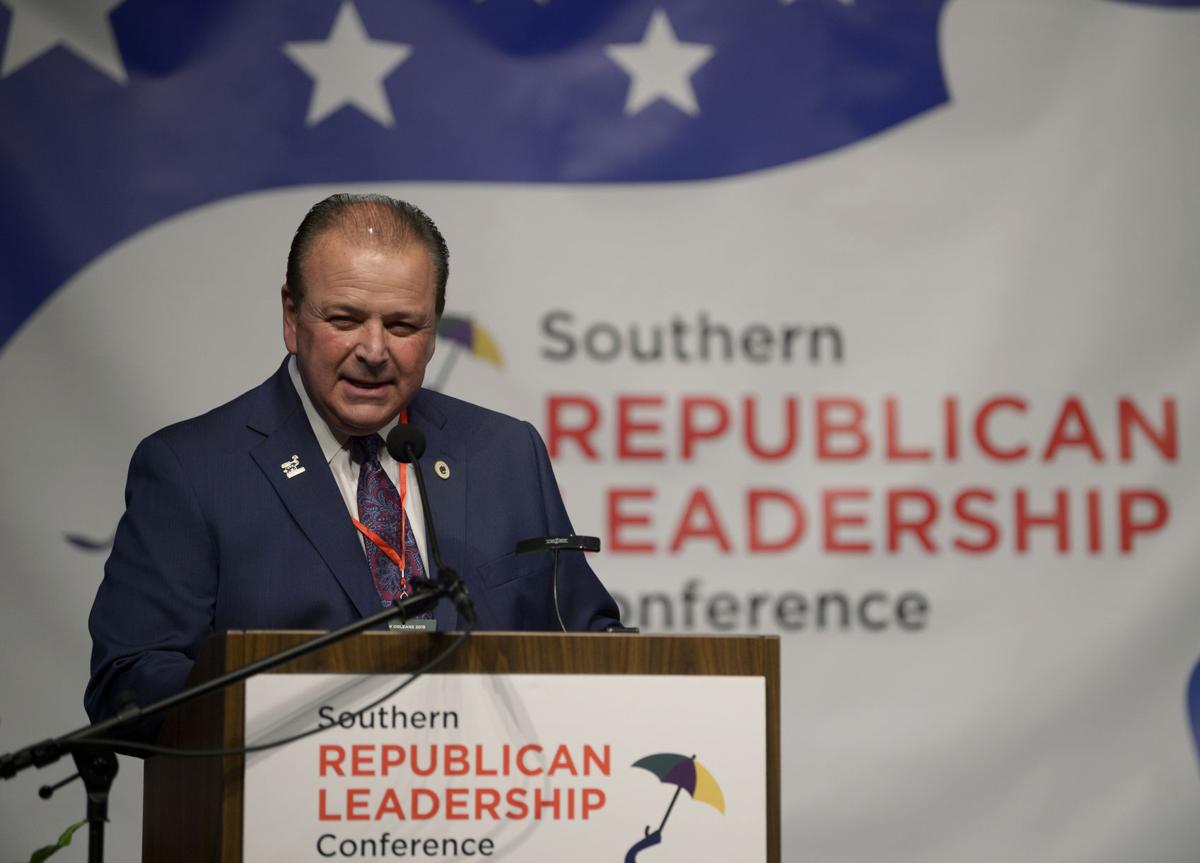 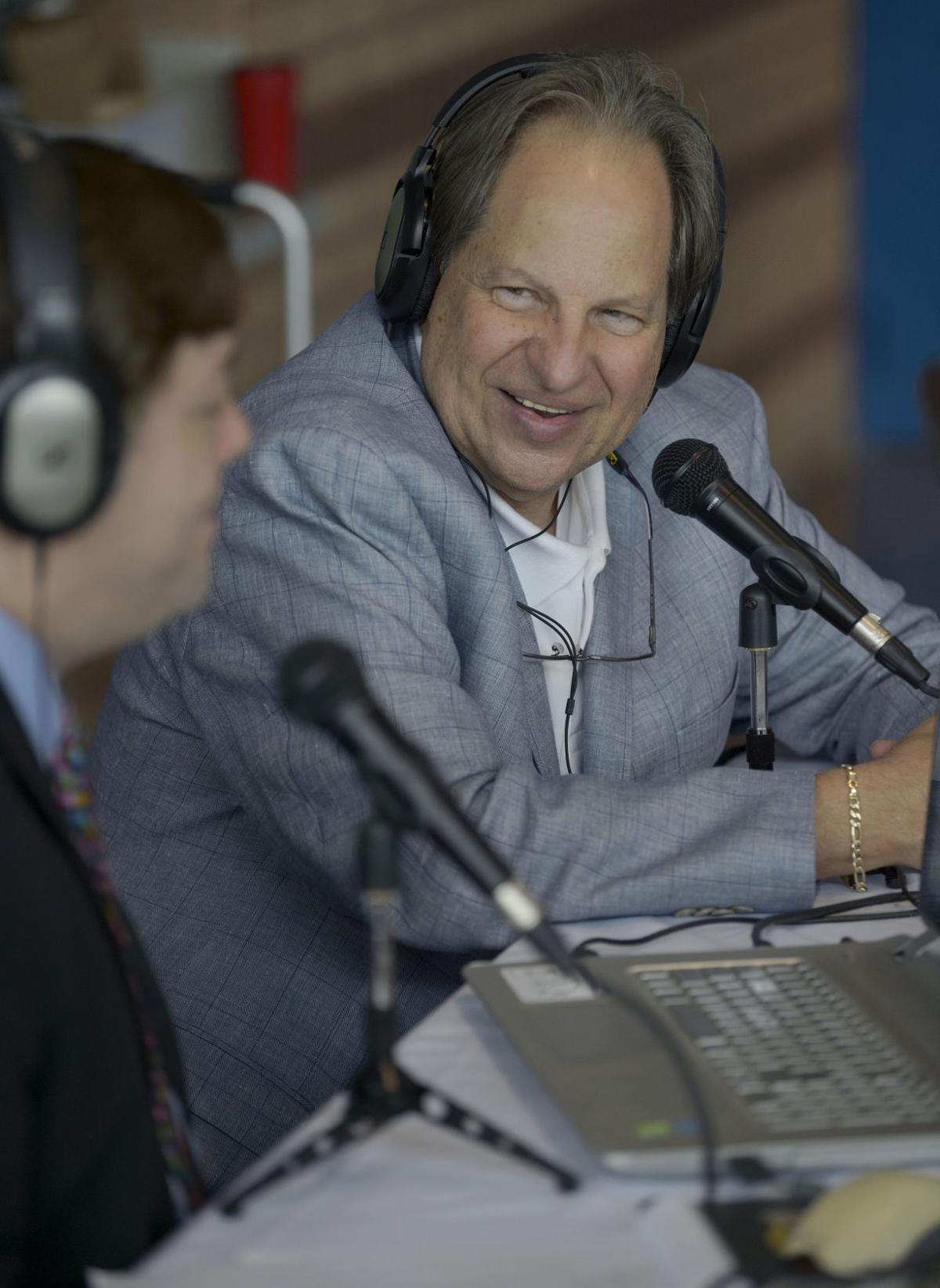 Roger Villere, a member of the Louisiana Republican Party, is interviewed on radio at the Southern Republican Leadership Conference at the Pontchartrain Convention & Civic Center in Kenner , La. Friday, Jan. 18, 2019. The two-day event opened Friday. 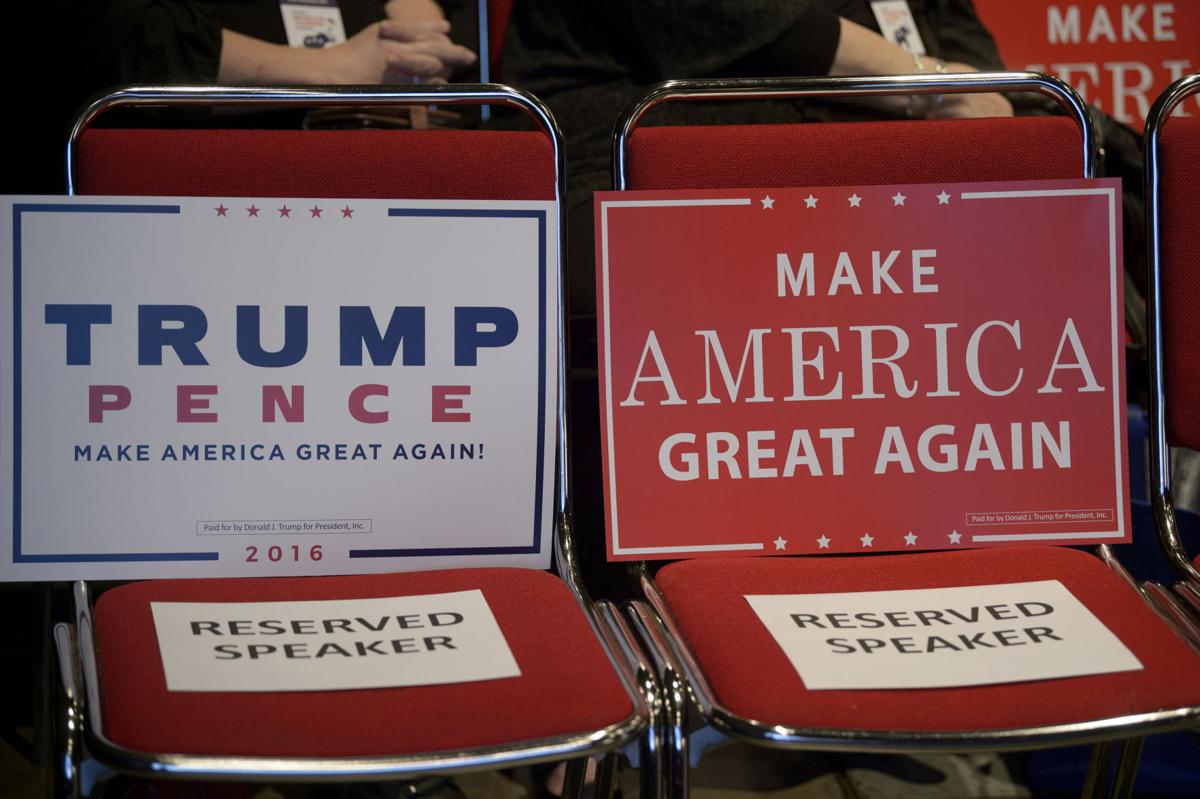 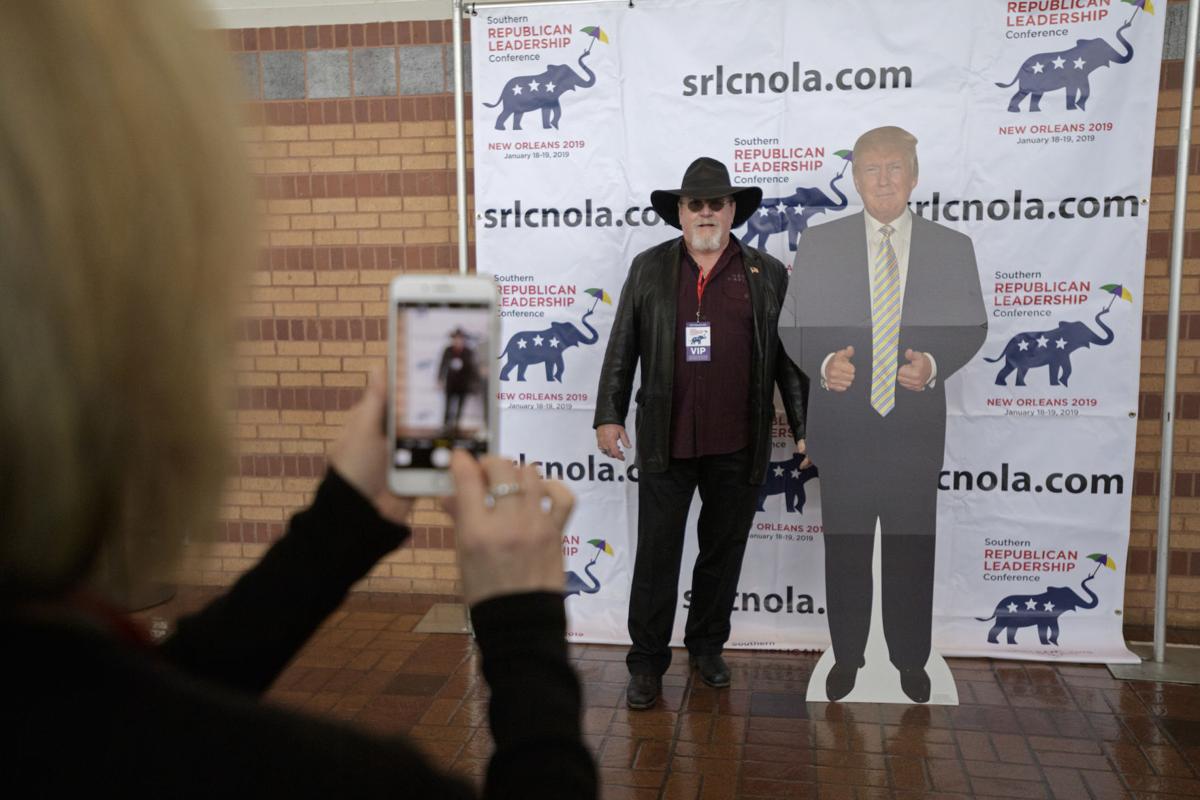 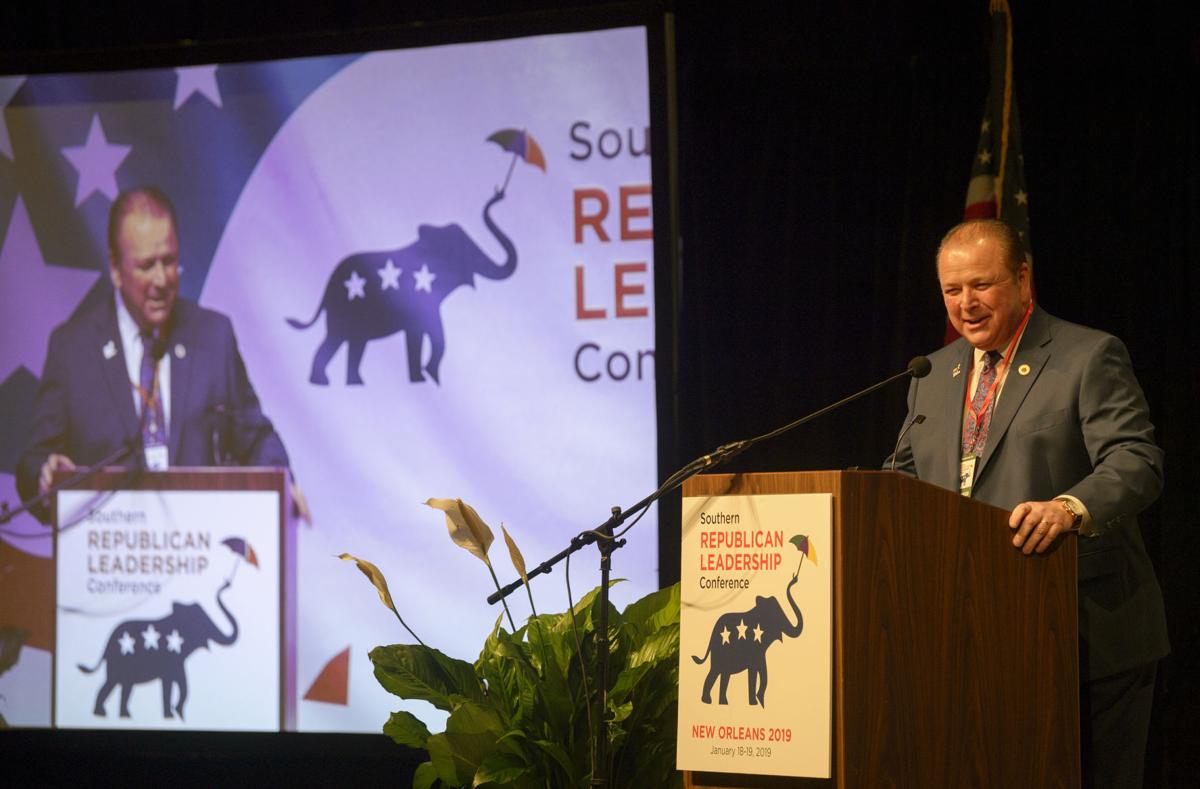 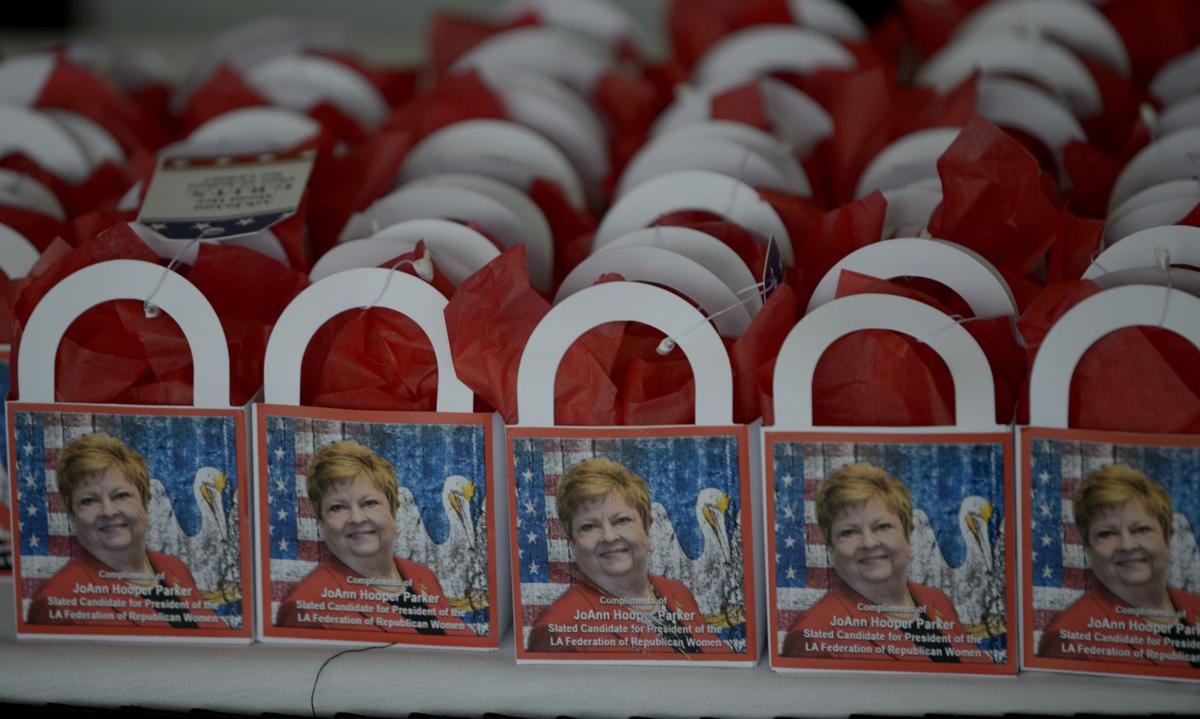 Free gifts are lined up for attendees to the Southern Republican Leadership Conference at the Pontchartrain Convention & Civic Center in Kenner , La. Friday, Jan. 18, 2019. The two-day event opened Friday.

Roger Villere, a member of the Louisiana Republican Party, is interviewed on radio at the Southern Republican Leadership Conference at the Pontchartrain Convention & Civic Center in Kenner , La. Friday, Jan. 18, 2019. The two-day event opened Friday.

Free gifts are lined up for attendees to the Southern Republican Leadership Conference at the Pontchartrain Convention & Civic Center in Kenner , La. Friday, Jan. 18, 2019. The two-day event opened Friday.

U.S. House Minority Whip Steve Scalise and Louisiana House Speaker Taylor Barras each took direct aim at Democrats when they welcomed Republicans from across the south to the New Orleans area on Friday.

Scalise, R-Jefferson, knocked U.S. House Speaker Nancy Pelosi and Senate Majority Leader Chuck Schumer over their feud with President Donald Trump over funding for a wall along the southern border of the United States. The showdown between Trump and Democrats has partially shut down the federal government for nearly a month.

“We’re going to win this battle," Scalise told the crowd, stressing that Republicans are committed to keeping the partial shutdown going for wall funding. "It’s a battle for the future of our country.”

And Barras, R-New Iberia, detailed his frequent sparring with the administration of Gov. John Bel Edwards, the only Democratic governor in the Deep South.

“It’s been an interesting battle, but trust that we are out-thinking them, out-smarting them, acting before them, and they’re not liking any of it," Barras said, explaining the positions he's taken to block Edwards's budget efforts. "We continue the battle."

The Southern Republican Leadership Conference, dubbed the "Kickoff to 2020," started Friday and ends Saturday. Most of Louisiana's state-wide elected officials and members of the Congressional delegation have or are scheduled to take part in the event.

On Friday, shortly after doors opened, dozens of people dressed in red, white and blue filtered through the halls of the Pontchartrain Center, picking up fliers from booths supporting conservative causes, and browsing through Trump-themed wares, including bejeweled clutch purses adorned with some of the president's signature phrases, "MAGA" and "Fake News" and Trump-signed memorabilia.

More than 200 people took in speeches that stretched into the evening.

The regional political event, which is held before each presidential election, this year has taken on a decided Louisiana flavor, as Trump has announced intentions to run for re-election and no Republican has entered the race to challenge him. It's also a state-wide and legislative election year for Louisiana.

Barras, who is term-limited in the House, told the crowd that the GOP hopes to gain a 70-member supermajority in the House — up from the 60 or so, depending on vacancies throughout the term — currently held.

After tense meeting over possible rosier Louisiana financials, no update to revenue forecast

Just when it seemed fights over Louisiana's state budget had become a thing of the past, tempers flared again at the State Capitol on Tuesday …

"We need it badly, especially if by some fluke of the system, this governor gets elected for another four years," he said.

Republican legislators have never made a serious attempt at ending the Medicaid expansion that Edwards enacted through executive order shortly after taking office, but Barras noted that it has meant an influx of federal funding that has increased the overall size of the state budget. He said conservative Republicans want to overhaul the budget but would find an “easier path” if a Republican is elected governor this year.

“That work will continue, but as long as we have a battle with the fourth floor in the Capitol, it’s a tough challenge,” he said in a reference to where the governor's office is located.

Donald Trump greeted with king cake upon New Orleans arrival, and, yes, it had filling

Scalise, meanwhile, gave a full-throated defense of Trump, whose presidency has been clouded by an FBI probe into Russian meddling in the 2016 election.

Just hours before Scalise took the stage, Buzzfeed News reported, based on unnamed sources, that Special Counsel Robert Mueller has learned Trump told his then-lawyer Michael Cohen to lie about negotiations to build a Trump Tower in Moscow to conceal his involvement in it during the 2016 campaign. Trump tweeted in response to the story that Cohen was “lying to reduce jail time.”

Scalise didn’t directly mention the breaking news item, but he defended the president against allegations that his election was aided by Russia.

“This president has a firm grip on what’s going on, not only in America, but all around the world,” he said.

As a member of the House Republican leadership, Scalise has taken part in meetings at the White House about how to move forward and re-open the government.

“(Trump)’s been there ready to negotiate, and not one time have they put a counter offer on the table," he said. “They don’t want to re-open the government. They don’t want border security.”

The SRLC crowd was visibly in favor of Trump and his push for a wall, clapping and cheering frequently when the wall was mentioned in Scalise's speech and at other points in the day.

Hours after Scalise's speech, Trump tweeted that he will "be making a major announcement concerning the Humanitarian Crisis on our Southern Border, and the Shutdown" on Saturday.

The rest of the first day of the SRLC event was peppered with other Louisiana Republican political figures.

Attorney General Jeff Landry gave a pro-Trump wall speech as attendees ate lunch. Lt. Gov. Billy Nungesser opened the festivities with jokes about his suit that is pinstriped with the state's new slogan: "Louisiana: Feed Your Soul" and thanked attendees for joining.

“Our challenges are many, especially as we grow the Republican Party here in Louisiana and across the country,” he said.

Later in the afternoon, a panel of Louisiana Republican legislators took part in a discussion on encouraging more women to take on leadership roles in politics.

“The good outweighs the bad, and we need you,” said Sen. Sharon Hewitt, R-Slidell.

While ExxonMobil exemptions fail in Baton Rouge, Shell on cruise control in Ascension