WASHINGTON — As the U.S. House pursues impeachment charges against President Donald Trump in the coming months, Louisiana is positioned to play a potentially dynamic role, with members of Congress on influential committees or taking on key surrogate roles.

The reaction to news that House Democrats are launching an impeachment inquiry of Trump has largely split along party lines. Democrats heralded it as the breakthrough; Republicans have waved it off as another partisan-driven allegation.

Likewise, Louisiana Republicans have called efforts to impeach Trump a “witch hunt,” argued that it’s driven by “hatred of the president,” and generally toed the White House line.

The lone Democrat in Louisiana’s congressional delegation, who has been pushing impeachment for months, describes it as the inevitable outcome of a slow march since Democrats took control of the House in January.

“The biggest thing to take out of that is the incredibly polarized nature of our politics,” said Brian J. Brox, associate professor of political science at Tulane University. “It’s going to take a lot of scandal, a lot of evidence, a real smoking gun to change that.”

Impeachment is the process the U.S. House uses in investigating claims of wrongdoing by a president. If the Democrat-led House votes to impeach — essentially the equivalent of a criminal indictment — the matter then shifts to the GOP-controlled Senate to decide whether to convict and remove the president from office.

Removing the president from office requires a two-thirds vote of the Senate, meaning a significant number of Republicans would have to go along with Democrats supporting impeachment. 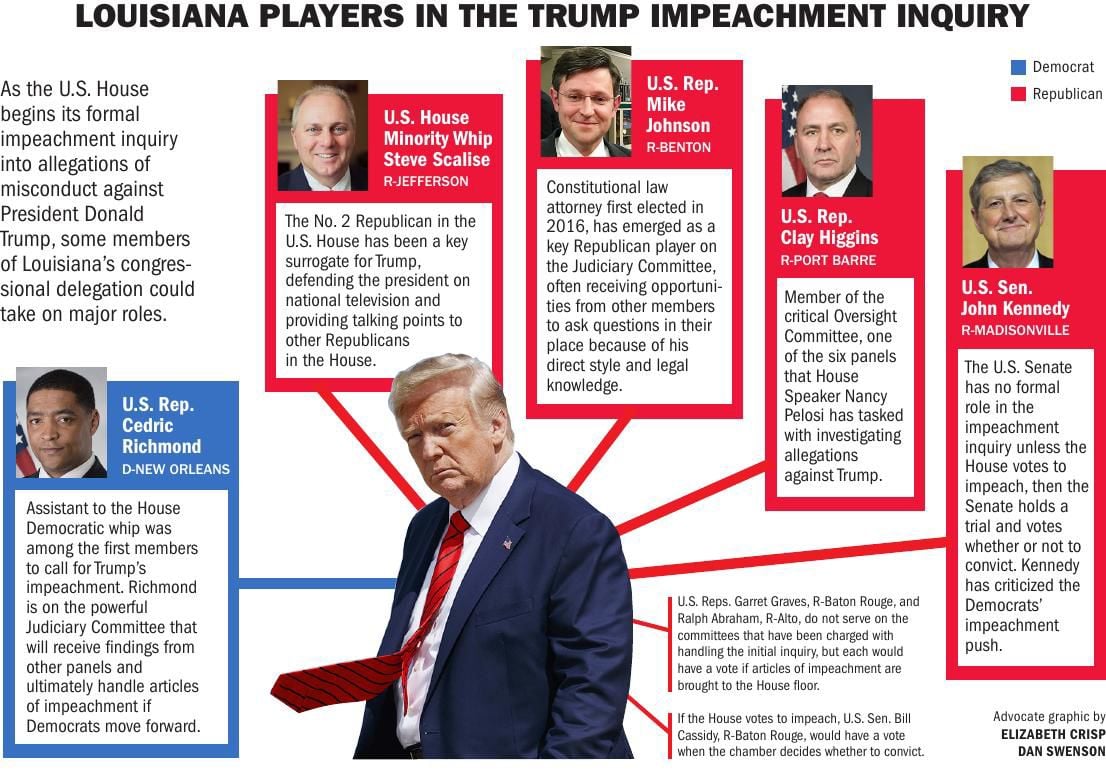 Democrats have been toying with the idea of impeachment since taking control of the House following the 2018 midterm elections. The tipping point was a whistleblower’s complaint over a call that Trump had in July with Ukrainian President Volodymyr Zelensky and whether Trump had suggested a quid pro quo: a probe into Democratic rival and former Vice President Joe Biden in exchange for millions in military aid to the Eastern European country.

Trump offered his personal counsel and former New York City Mayor Rudy Giuliani's assistance. A memo detailing the call to Zelensky and the complaint have been released to the public, but neither seemed to change minds that have already been made up.

“(Democrats) are driven so much by their hatred of the president,” U.S. Rep. Mike Johnson, R-Benton, said during an appearance Friday on KEEL talk radio. “This looks to the American people like nothing more than another baseless investigation in the far left’s vendetta against the president.”

Johnson, leader of the Republican Study Committee, has emerged as a key Republican player on the House Judiciary Committee, which will ultimately vet the articles of impeachment if Democrats choose to bring them.

"This should be cause for concern for the entire country," Richmond told reporters after the Administration's release of the memo detailing Trump’s call with Zelensky. "You see (Trump) asking a foreign leader to investigate one of his political opponents in this presidential race.”

In the call, Trump tells Zelensky he should look into unsubstantiated claims that then-VP Biden pressured Ukraine to drop an investigation into a firm that Biden’s son Hunter was working for at the time.

Biden is the Democratic frontrunner for the party’s 2020 nomination to run against Trump. The call and other details prompted a whistleblower, whom the New York Times has identified as a CIA officer, to file an ethics complaint.

U.S. Rep. Clay Higgins, a Port Barre Republican who is on the House Oversight Committee that is also tasked with vetting the allegations against Trump, has dismissed the ordeal as the work of “socialist elitists” and the “Deep State.”

“Their probable cause is solely a burning hatred for President Trump,” Higgins said. “They lost badly on the fake Russia conspiracy, but here we are again with yet another witch hunt: The Ukraine conspiracy.”

U.S. House Minority Whip Steve Scalise, a Jefferson Republican who has been a key ally of the president, has emerged as a prominent surrogate in the Trump administration's attempts to color the allegations as the actions of “leftist radicals.” Scalise has appeared on national television and spoken robustly from the House floor.

“You're expecting to read something that's going to read like a mystery novel and have all of these things that they said would be in there, and then you read it,” he said in a meeting with reporters after the complaint was released Thursday. “And you're going ‘OK, what?! Is there another couple of pages I'm missing?’”

Where do Louisiana congressmen stand on the latest Trump impeachment push?

“I don't see any high crimes and misdemeanors, and that is the standard of impeachment in the Constitution,” Scalise said.

In the 2016 election, Trump won Louisiana with 58 percent of the vote and more individual votes than any candidate on a Louisiana ballot had ever received. Polls have shown Trump remains popular in Louisiana, and candidates for statewide office this year have been quick to embrace the often-unconventional president.

Scalise said he saw nothing improper about the call in which Trump said he needed "a favor" from Zelensky.

“It's a congratulatory call, where our president is congratulating the Ukrainian president for winning an election that was based on a similar kind of approach of cleaning up the swamp,” Scalise said, noting Zelensky’s campaign has been compared to Trump's campaign.

On the radio, Johnson, a constitutional law attorney first elected in 2016, assured his northwest Louisiana audience that “there’s no ‘there’ there.”

Asked if he thought that House Democrats pushing impeachment had “lost their minds,” the Benton Republican said, “They really have.”

He also told listeners about an unfounded theory he had heard on Capitol Hill that the whole thing is being orchestrated by Democrats who want moderate Biden to drop out of the race so a more liberal candidate can secure the party’s presidential nomination.

“I don’t doubt anything anymore,” Johnson said. “We are in Bizarro World.”

WASHINGTON — Congress returns to the U.S. Capitol this week, after a five-week recess from the nation's capital, but it's unclear what lawmake…

The House hasn’t specifically outlined what happens next.

U.S. Rep. Adam Schiff, the California Democrat who chairs the Intelligence Committee that is taking the early lead in the investigation, wrote in a letter to members Friday that the complaint provides a road map for the investigation and that subpoenas and requests for documents are already being filed. He predicted the investigation will accelerate in the coming week.

“We have to flesh out all of the facts for the American people,” the longtime Trump foil wrote. “The seriousness of the matter and the danger to our country demands nothing less.”

Richmond, who serves as a co-chair of Biden’s presidential campaign, said he agrees the process should move swiftly.

Brox, the Tulane professor, said he also expects a steady stream of updates in the coming weeks as House leaders seek testimony and additional records.

“We’re not even close to starting a formal impeachment process. They’re going to need to know what they have to work with,” he said.

Up to this point, the administration has claimed executive privilege over some sensitive information, but that process is likely to face a more robust challenge, Brox said.

“The fact that there is a formal inquiry strengthens the House’s hand in court,” he said.

U.S. Reps. Garret Graves, R-Baton Rouge, and Ralph Abraham, R-Alto, are not on committees currently leading the charge, but both would be able to vote on impeachment if it makes it to the House floor. Both support Trump and have denounced the impeachment inquiry.

U.S. Sen. John Kennedy, a Madisonville Republican who has become a national media darling for his pithy soundbites, already has had a viral moment in defending the president against impeachment on MSNBC.

“Do you think they got Hunter Biden's name off ZipRecruiter? I don't. I don't think the American people do,” he said in a tense exchange with Meet The Press host Chuck Todd, borrowing from Trump’s approach of turning allegations back to Biden. “I'm not alleging impropriety. I'm saying we need to look into it.”

U.S. Senate Majority Leader Mitch McConnell, R-Kentucky, told NPR Friday the Senate will not ignore its part of the process if the House votes to impeach.

“If the House were to act, the Senate immediately goes into a trial,” he said. "If it were to happen, the Senate has no choice."

Johnson said he thinks the impeachment push is making the already unpopular Congress look bad and creating a cloud over the executive branch.

“To me, that is the great fear is that people lose faith in our institutions,” he said.

But Johnson said he feels that investigating the president has taken central focus in the committee. Hearings in September included ones titled “Presidential Obstruction of Justice and Abuse of Power” and “Presidential Corruption: Emoluments and Profiting Off the Presidency.”

“What that means, of course, is it takes all of our time — it takes all the energy out of the room,” Johnson said. “We are stuck in a stalemate.”

It’s a point Scalise also has been stressing as he’s made the rounds to defend the Trump administration.

“Impeachment is something that you should do in the rarest of circumstances, when the highest standard is met, that the Constitution calls for — that's high crimes and misdemeanors. It shouldn't be some throwaway charade that you use to appease your radical socialist slate,” he said.

But Richmond argued there are enough questions swirling around Trump's actions that demand answers.

“At some point protecting the Constitution is more important than politics,” Richmond said. “We have an obligation to act.”