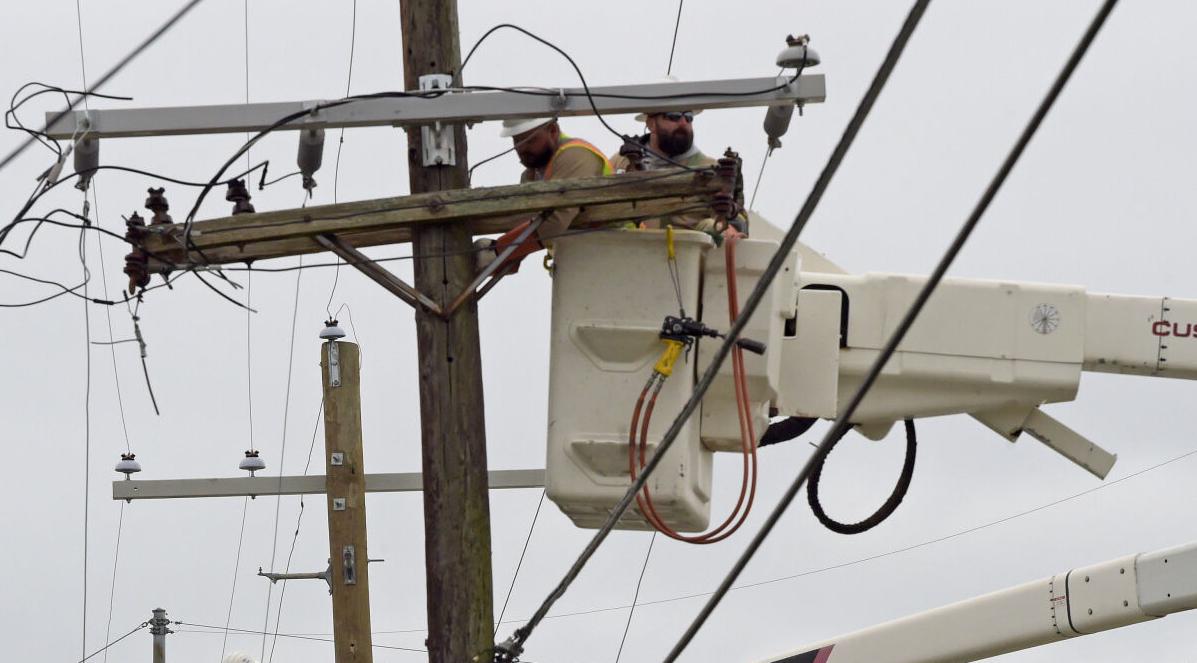 Utility workers repair power lines damaged by Hurricane Zeta on Cecil St. in New Orleans, La. Friday, Oct. 30, 2020. Hundreds of thousands of customers have been without power since the storm passed. (Photo by Max Becherer, NOLA.com, The Times-Picayune | The New Orleans Advocate) 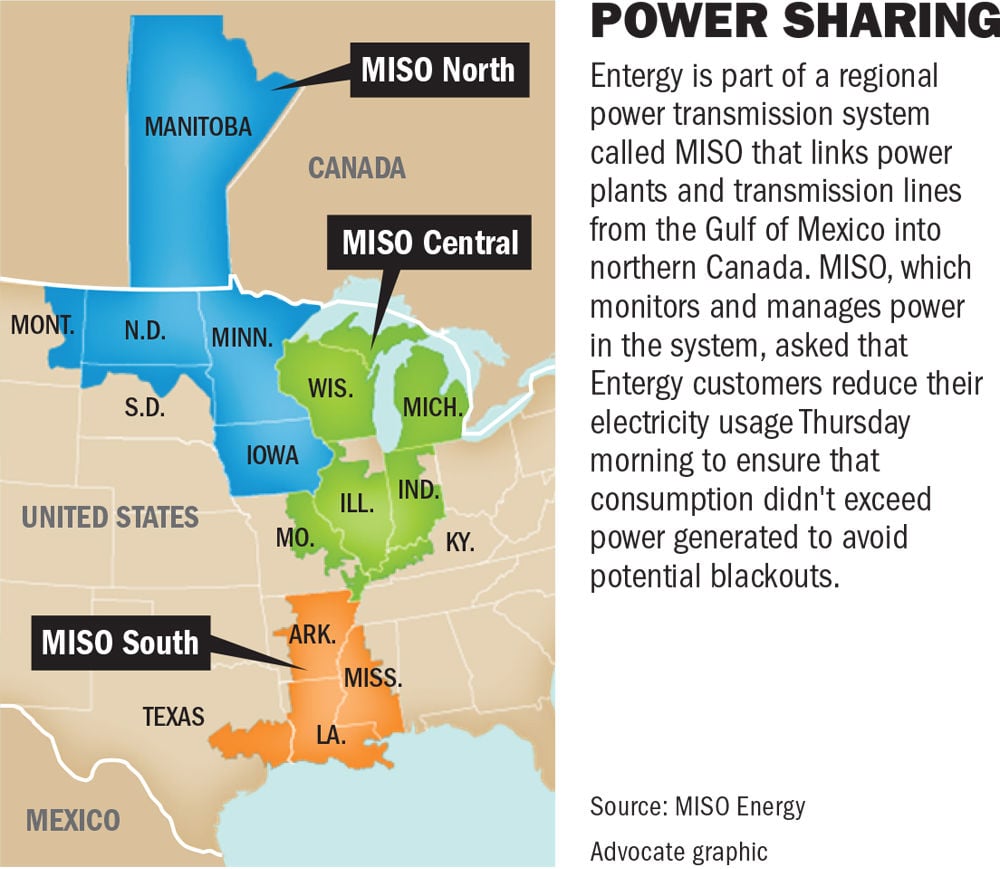 Louisiana utility regulators are taking a deep dive into the chain of events, including what they call greedy natural gas suppliers, that led to the rolling energy blackouts that left some 2 million customers in the dark and cold, some for more than an hour.

The issue is not power outages caused by ice breaking lines but a larger problem of delivering enough power across the state.

The biggest dilemma, of course, has been the pressure on the electricity generating and delivery system that was not designed to handle everyone running their heaters full blast at the same time. Heaters use more electricity than air conditioners.

This polar vortex is historical, and many utilities in the Deep South, which normally has relatively mild winters, have to run full out to deliver so much energy for such a prolonged time.

Any hiccup leads to problems.

“The secondary issue (is) some of the contracted fuel suppliers to these utilities, some of them decided they were going to go and not deliver … saying, ‘We’re going to sell it on the market’ because people have driven the price of natural gas to unconscionable levels,” said Louisiana Public Service Commissioner Eric Skrmetta, of Metairie, on Wednesday.

“That’s a real problem for me.”

Public Service Commission Secretary Brandon Frey said Wednesday that he is working on three different issues for staff to investigate and expects more directives by Friday. The commissioners plan to meet Feb. 24 to hear from the utility officials.

The American Gas Association said in a release that a record amount of natural gas was delivered across the United States on Sunday and Monday. But there were problems too.

Natural Gas Pipeline Co. of America was experiencing horsepower issues at two compressors in Louisiana, reported Natural Gas Intelligence, a subscription service that analyzes the markets and is based in Dulles, Virginia.

Price also was a major factor. The price of gas futures, which is what utilities contract to fuel their generators over time, ran at about $3 per 1 million British thermal units, or MMBtu, which is how natural gas is sold. But spot prices, which is what gas sells for in the current market, nationally averaged $80.76 since the cold and in Oklahoma on Friday surged as high as $999, according to Natural Gas Intelligence.

Skrmetta said he has received reports that utilities weren’t getting the natural gas necessary to run the generators that make electricity, causing several generating plants to have to turn themselves off. When the plants go offline, regional transmission operations have no choice but to shut down some areas — rolling blackouts — to keep the entire system from collapsing.

“There is no reason for these units not to be receiving fuel in the first place,” Skrmetta said. “We may not have jurisdiction over the gas companies, but we can tell the utilities who they’re going to buy from, and if they can’t get reliable guaranteed fuel supplies, then they’re not going to be doing business with” those natural gas suppliers.

Rolling blackouts have been implemented from Minnesota to Texas.

Rolling blackouts were eased late this morning after being in effect for some two hours, SLEMCO spokesperson Mary Laurent said at 9:33 a.m.

Texas is in a different position from Louisiana because most of that state has its own power grid that’s not connected to the rest of the nation, so it can’t receive power from regions with excess power.

The rolling blackout Tuesday night in Louisiana, which lasted from 20 to 90 minutes, was implemented statewide, said John Hawkins Jr., Entergy Louisiana's vice president of distribution operations. Earlier on Tuesday, areas in southwest Louisiana were blacked out for a short time.

"The declaration instructed member utilities in the affected areas to implement periodic power outages. These controlled outages are a last resort in order to prevent a larger system outage and are only directed rarest circumstances.”

MISO said its electricity grid is stable: “MISO’s North and Central Regions continue to export energy to the South Region and are projected to remain reliable.”

Basically, fuel is used to turn the turbines that make electricity. That power needs to be used as soon as it is made. Excess power is directed by MISO and other operators to regions in need of additional power.

During this polar vortex event, many electric generators have been unable to keep up with the demand. If the supply load drops below demand, the system faces long-term issues.

What are 'rolling blackouts'? Here's why Louisiana utilities are being asked to shut off power

Rolling blackouts have left millions of customers in Texas without power this week, and on Tuesday night Louisiana residents began to experien…

“In order to prevent a catastrophic or cascading event, you have to reduce the load, so that’s when you get into that load shedding type of scenario,” Hawkins said.

At that point, the regional transmission operators, like MISO, order the shutdown of specific grids — called shedding load — to allow the electrons to catch up with the deficit.

Rather than calling the head of the utility company, MISO’s calls go directly to a plant’s operations center with specific instructions on how power needs to be turned off. The plant operators are legally obligated to follow the orders of the transmission operators.

“The tricky part is that since load shedding is a last-case scenario, MISO is always trying to avoid it until they have no choice, and then as soon as they can are stopping the load shed requirement,” said Public Service Commission Chairman Craig Greene, of Baton Rouge. “This is why people have seen so many different notifications that they may experience a 30-minute black out, only to then be told they won’t.

Greene is optimistic about the next few days as temperatures become milder.

“The expectation is that as temperatures rise and the demand on power — presently the excessive demand on gas that is straining the grid — lessens, generation units will no longer be at peak demand and we will be in the clear of rolling black outs,” Greene said.