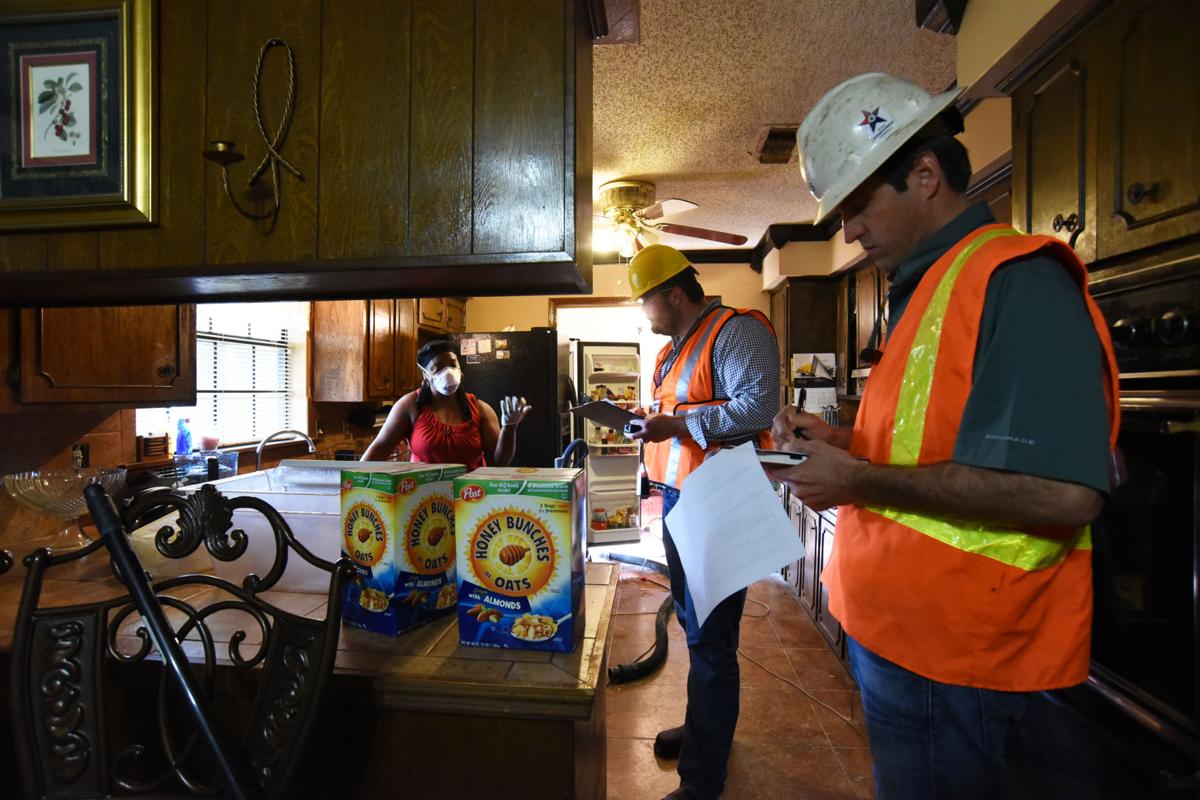 Billy Sullivan, right, and Andre Leblanc, center, talk to Patricia Lee about the work Sullivan’s building company will perform on her flooded home on Friday morning as part of the Shelter At Home program. 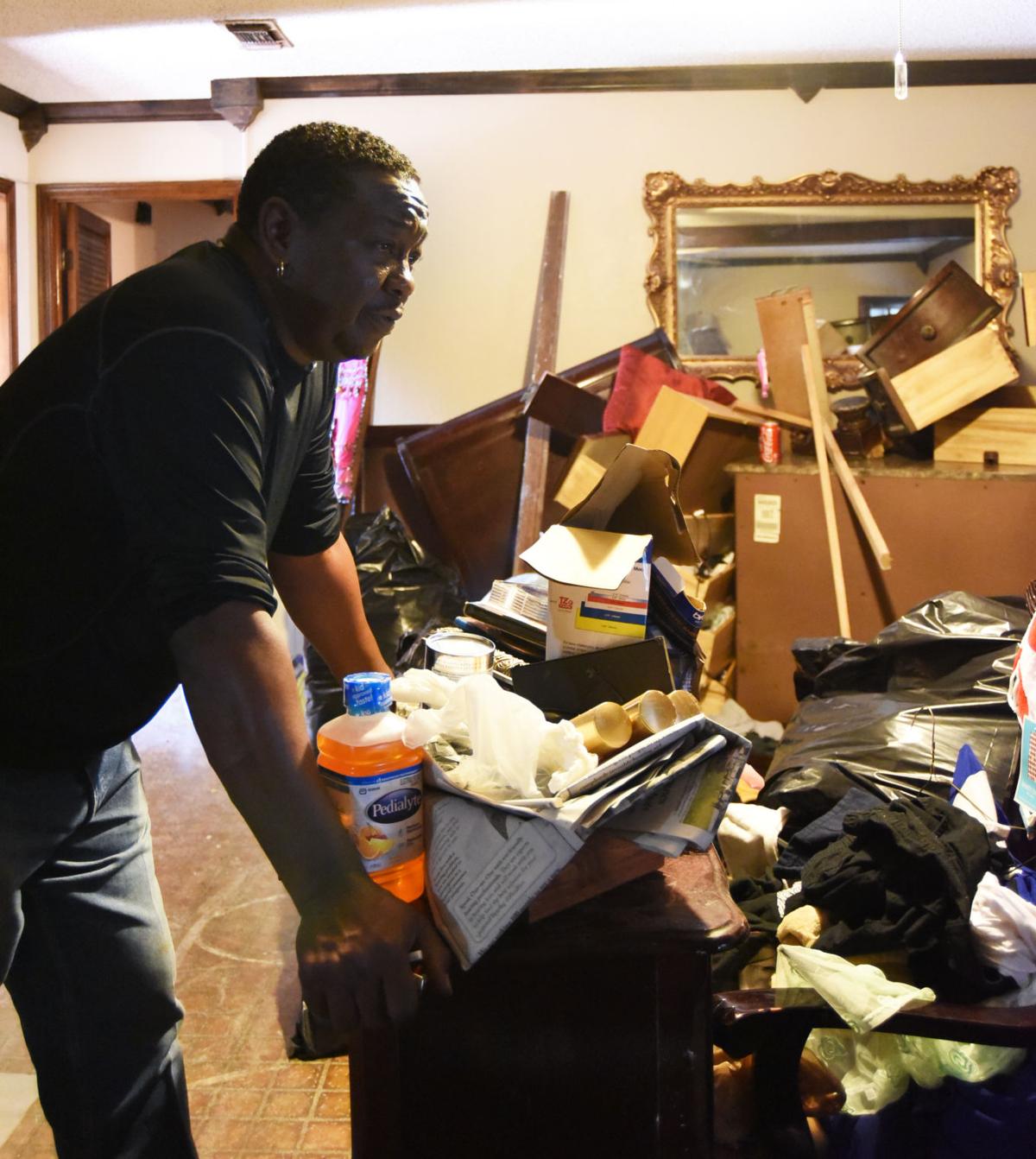 Freddie Lee looks over his posessions in his flooded home on Friday morning as workers surveyed the damage as part of the Shelter At Home program.

Billy Sullivan, right, and Andre Leblanc, center, talk to Patricia Lee about the work Sullivan’s building company will perform on her flooded home on Friday morning as part of the Shelter At Home program.

Freddie Lee looks over his posessions in his flooded home on Friday morning as workers surveyed the damage as part of the Shelter At Home program.

Just four of the more than 18,000 households that have sought help from Louisiana's signature housing recovery program have had emergency repair work completed, following the catastrophic floods that swept across South Louisiana last month.

But leaders say that they expect the number to ramp up as the "Shelter At Home" program gets past the initial hurdles of its launch.

"It takes time to establish a program and get it moving," said Lael Holton, of AECOM, the company selected to administer the program. "Those homes are going to start moving forward very rapidly."

Holton said that at least 900 homes are currently in the process of repairs two weeks after the program formally launched. That number is expected to continue to increase, as more construction crews hit the ground.

"18,000 people are all seeking the same service at the same time," Holton said. "We're pushing it as fast as we absolutely can."

Shelter at Home was unveiled last month as a key component of the state's plan for addressing the needs of thousands of people left displaced by the August floods, while also easing the burden on an already squeezed housing market.

Gov. John Bel Edwards has on several occasions, including during a recent congressional hearing, touted the program as the preferred housing recovery method, as opposed to rental assistance and hotel stays, because it allows people to remain in their communities.

The idea is to get homes into a livable state, so people can live there while they make more permanent repairs.

On Wednesday, Edwards' spokesman, Richard Carbo, said that the governor is closely monitoring the Shelter at Home roll out and remains optimistic about it.

"I think over the next 24-to-48 hours, the numbers will spike dramatically," Carbo said. "We're doing everything we can to get people into their homes as quickly as possible. It's a process."

The state and federal partnership is a first for Louisiana, and leaders have touted it as an innovative solution for the complex housing needs that have arisen following the floods.

But Holton said that homeowners in the pipeline have already been expressing frustration over the pace of the roll out.

"Right now, we are continuing to let folks know that we are hearing their concerns," he said.

Thousands apply, inspectors already on ground for Louisiana's version of 'Shelter at Home'

More than 5,400 people whose homes were damaged by the catastrophic flooding that swept acro…

During a recent congressional hearing on the flood response, U.S. Rep. John Mica, R-Florida, said that he had also was aware of concerns over the Shelter at Home program's pace.

Mica, who chairs the House subcommittee that oversees FEMA and visited Baton Rouge following the flood, said that FEMA blamed the state for delays.

"The thing I heard was that it took a long time to get Shelter at Home in place," he said. "I'm saying, 'Why hasn't anything been done?' (FEMA) said the state had not approved a plan."

Officials estimate that as many as 160,000 homes have been affected by the flood. The central goal of Shelter At Home is to help people return to their communities and settle back into their lives as they continue the recovery process.

If a home can be back in a livable state with up to $15,000 in repairs, then the state will OK the work and a crew will be sent out to do the work.

The program only covers minor repair work: basic electrical and plumbing inspections; carpet and insulation removal; air conditioning and hot water heater repairs; and installing temporary bathroom fixtures, are among the types of tasks they will consider.

The program will also pay for mini-refrigerators or microwaves to be installed to serve as makeshift kitchen appliances.

Holton said that despite the initial backlog, he thinks that it's important to spread word about the program. Shelter at Home representatives will be setting up at disaster recovery centers in the coming days and work to promote the program throughout affected parishes.

"One of the things we need to focus on is getting the word out to folks," he said.

Louisiana's Shelter at Home program is a key component of the housing recovery plan for flood victims, but it may not apply to potentially tho…

Julie Harvey has been sleeping in her wheelchair since last month's floods swallowed up her home, her handicap accessible van, the red curtain…