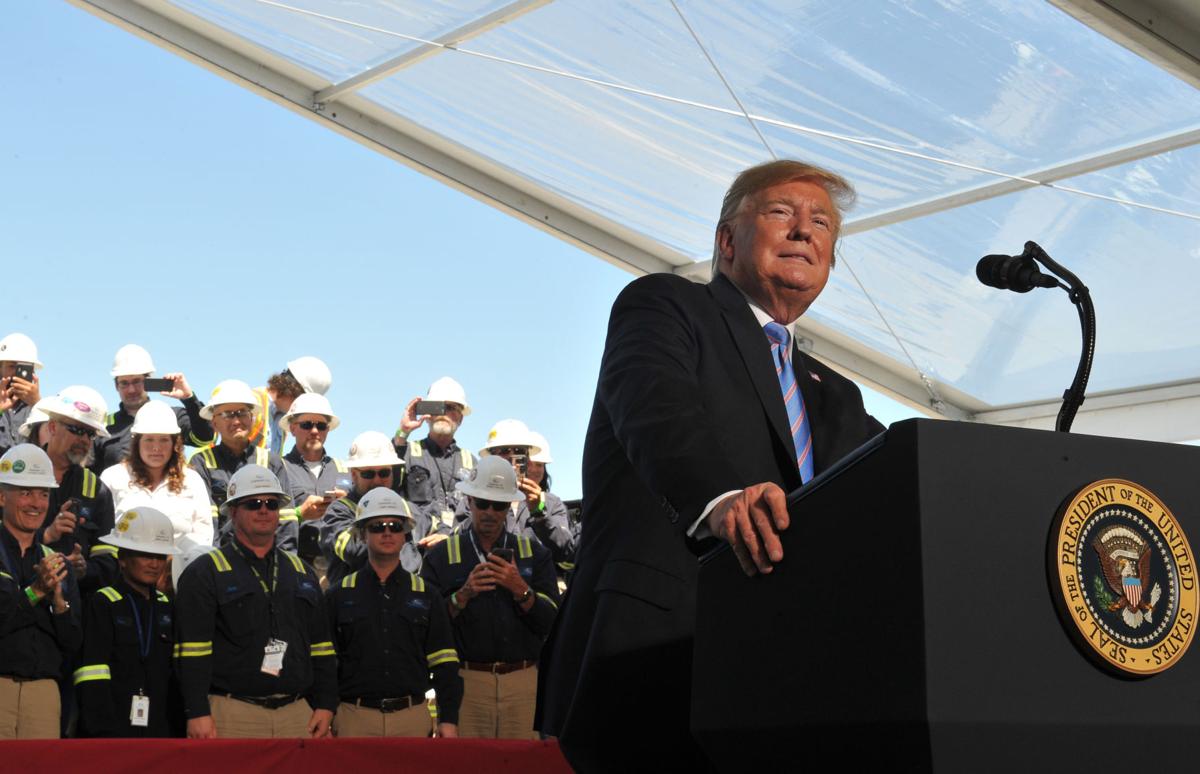 President Donald Trump speaks during a visit to the Sempra Energy LNG export facility on Tuesday, May 14, 2019, in Hackberry, Louisiana. 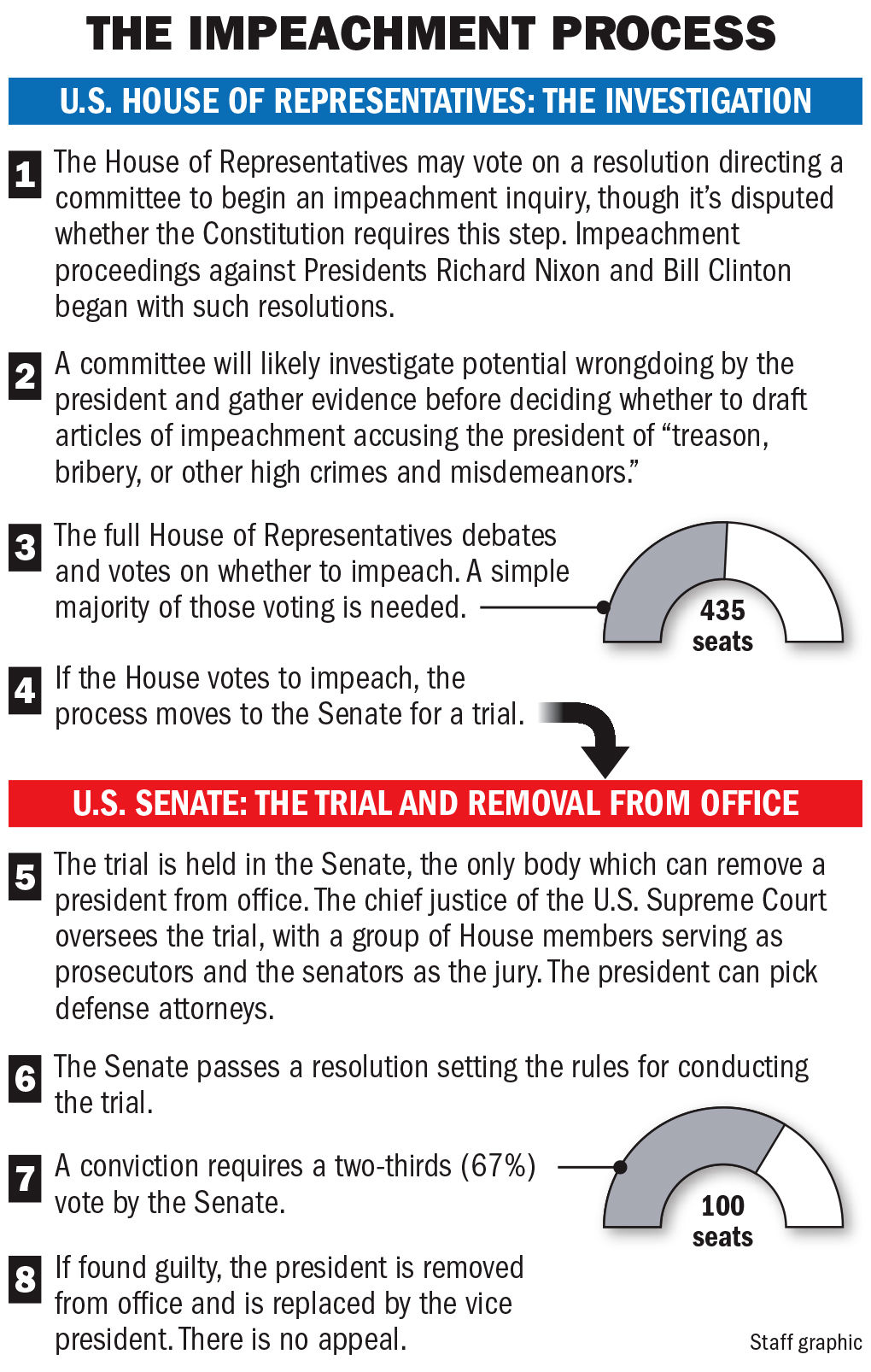 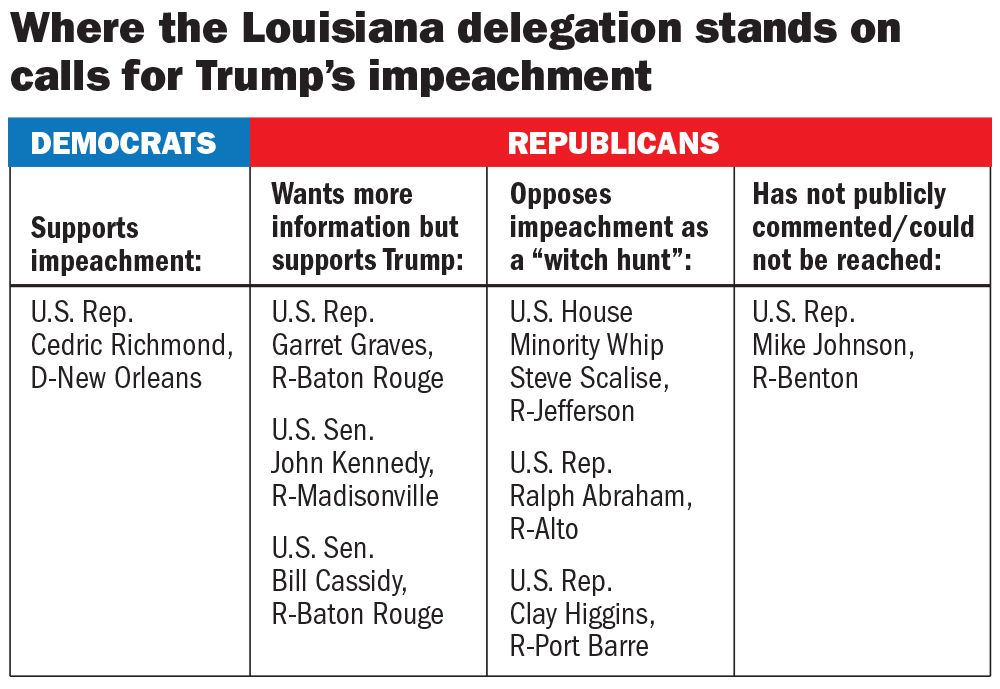 WASHINGTON — Louisiana Republicans in Congress are sticking by President Donald Trump as Democratic leaders escalate impeachment talk amid a new round of allegations that Trump sought help from a foreign leader to hurt a political rival.

How does the impeachment process work? As House launches inquiry of Donald Trump, here's a breakdown

“You’ve had them banging this drum now ever since the president was elected,” Graves said.

He said he wants more information about a whistleblower’s claim that Trump urged Ukrainian President Volodymyr Zelensky to investigate potential rival/former Vice President Joe Biden and his son's work in the Eastern European country before reaching a conclusion about whether Trump acted improperly.

“If we’re going to investigate this, there needs to be an appropriate scope,” Graves said, adding that he wants more information about Hunter Biden's work in Ukraine.

Graves described a situation in which Trump could have merely asked Ukraine’s leader whether the then-vice president had improperly stopped the country from investigating his son.

“If that’s what he said, I couldn’t be more supportive of it,” Graves said.

Appearing on MSNBC’s Meet the Press, U.S. Sen. John Kennedy, R-Madisonville, also questioned whether the younger Biden’s employment by a Ukrainian gas company had been fully investigated or if the vice president had interfered.

“The president was talking to the president of Ukraine about corruption,” Kennedy said. “There have been allegations about the vice president’s son.”

Biden and his son have both denied that their relationship influenced the Obama administration's diplomatic relationship with Ukraine while the then-vice president was leading diplomatic efforts with the country.

“It may turn out that the Ukrainian oligarch got Mr. Biden’s name off Zip Recruiter. I doubt it,” Kennedy said. “I’m saying that’s gonna be investigated.”

Trump, who denies wrongdoing, said he will release Wednesday "the complete, fully declassified and unredacted transcript" of his call with the Ukrainian leader. The president  acknowledged he personally decided to withhold military aid to Ukraine ahead of the call but offered various explanations for the delay.

U.S. Sen. Bill Cassidy, R-Baton Rouge, said the administration's transcript of the call will "speak for itself" when it's released.

“Democrats have called for impeachment since President Trump won the election. The Mueller investigation went nowhere, so they’re trying something new," Cassidy said. "In the meantime, I hope they focus on passing legislation that will raise military pay, stop surprise medical billing and other issues important to the well-being of Americans."

Other Republicans in the Louisiana delegation forcefully stood by the president as he faced another round of backlash this week — a consistent theme for Louisiana Republicans throughout the Democrats' cycle of investigations into potential improper conduct in the Trump administration.

Impeachment is the U.S. House's process of investigating claims of wrongdoing. If the Democrat-led House votes to impeach — essentially the equivalent of a criminal indictment, the GOP-controlled Senate would then take up the matter of whether to convict and remove the president from office.

Rep. Cedric Richmond, the only Democrat among Louisiana’s Congressional delegation, is the only member from the delegation who supports and has voted for the impeachment probe. Richmond represents the 2nd District in the New Orleans area.

Trump easily won Louisiana in 2016, receiving more individual votes than any candidate ever before in Louisiana.

Polls have shown he’s remained politically popular in the state in the years since, and campaign finance reports show Louisiana voters have given twice as much campaign cash to Trump's re-election effort this year than to all the 2020 Democratic presidential hopefuls combined.

"It’s pathetic and disgraceful that after the Mueller report showed there was no collusion, Speaker Pelosi continues to advance this impeachment witch hunt, now relying on unconfirmed, secondhand accusations," Scalise said Tuesday, referencing the special counsel's investigation into allegations that the Trump campaign colluded with Russia to interfere in the 2016 election and into possible obstruction of justice related to the probe. "The American people deserve better than this disgraceful impeachment witch hunt.”

"Their probable cause is solely a burning hatred for President Trump," he said. "They lost badly on the fake Russia conspiracy, but here we are again with yet another witch hunt: The Ukraine conspiracy."

U.S. Rep. Ralph Abraham, an Alto Republican who is running against incumbent Democratic Gov. John Bel Edwards, said the Democratic Party "has been working to impeach the president on phony and baseless charges since the day he was elected."

"Today is nothing new," he said. "I’ve been proud to work with President Trump these past three years, and I will continue to stand behind him as he keeps America great.”

U.S. Rep. Mike Johnson, R-Benton, couldn't immediately be reached for comment, but he has repeatedly voted against impeachment proceedings and defended the president against previous allegations.