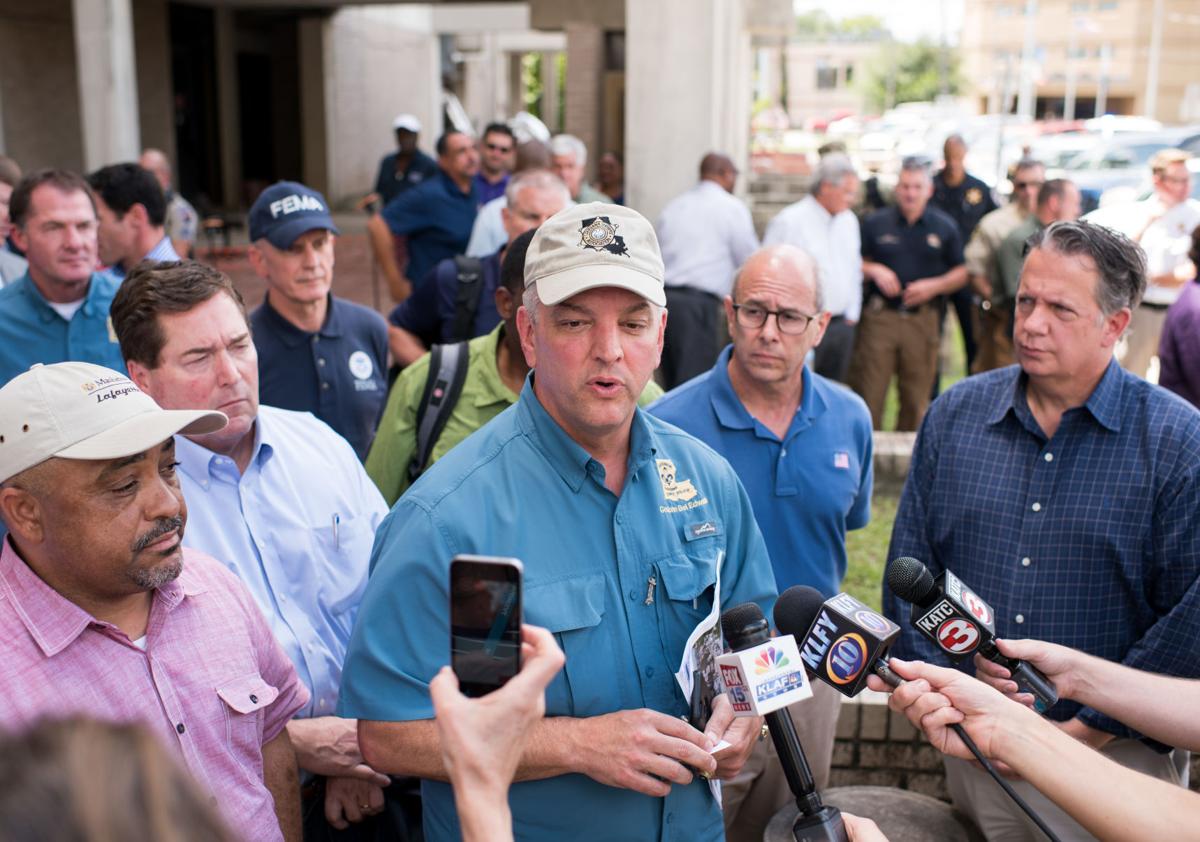 Advocate photo by PAUL KIEU -- Gov. John Bel Edwards speaks to the press following a briefing on recent flooding conditions in Acadiana at the Lafayette City-Parish Office of Homeland Security and Emergency Preparedness in downtown Lafayette, LA on on Monday, August 15, 2016. ORG XMIT: 00052701A 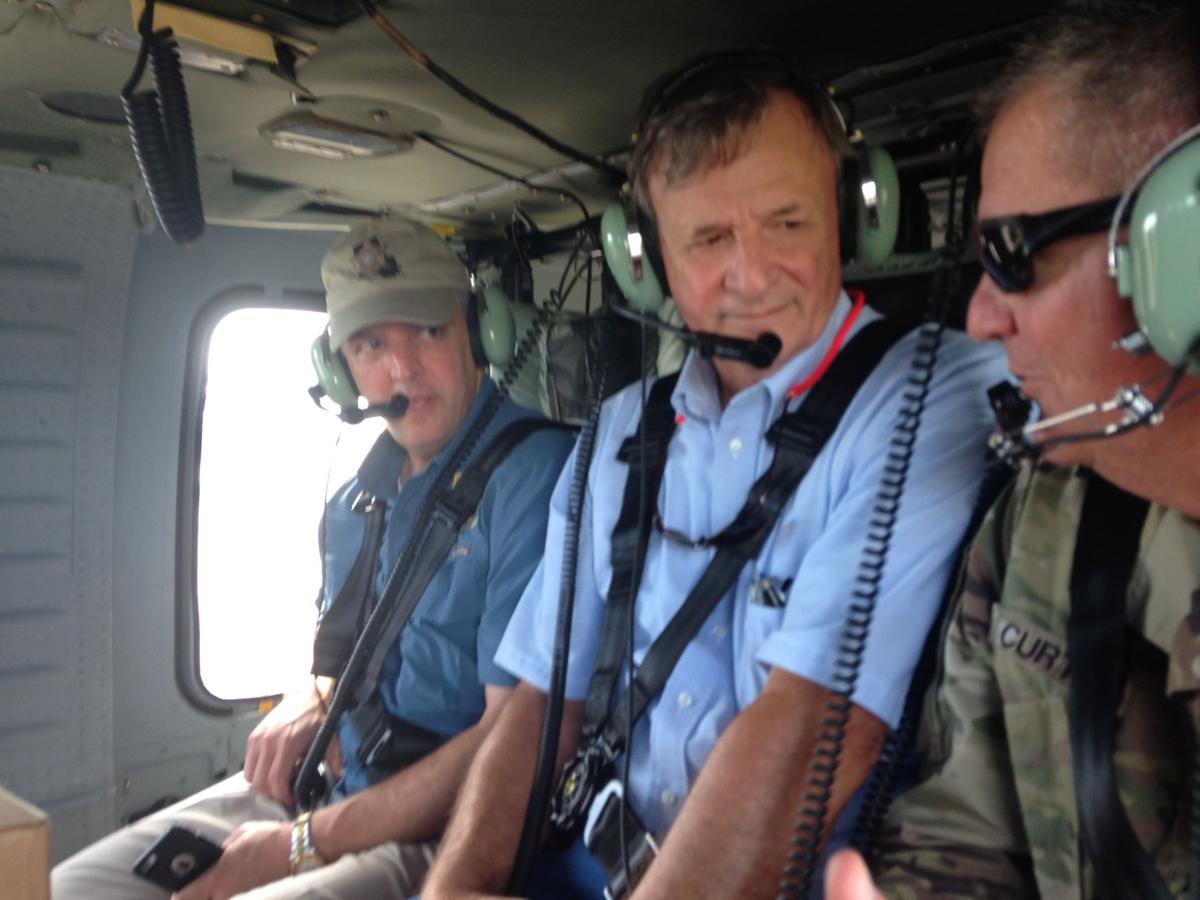 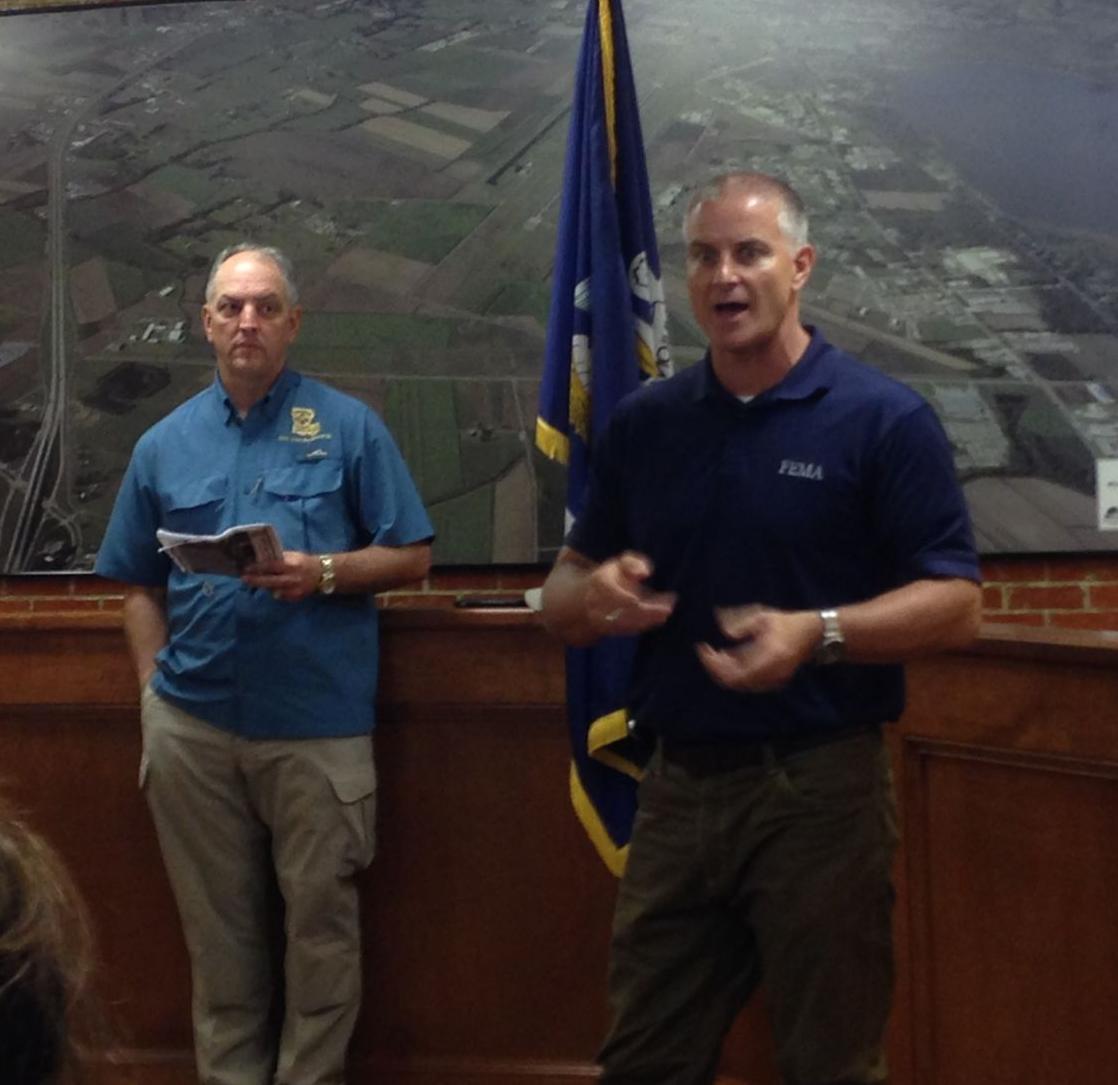 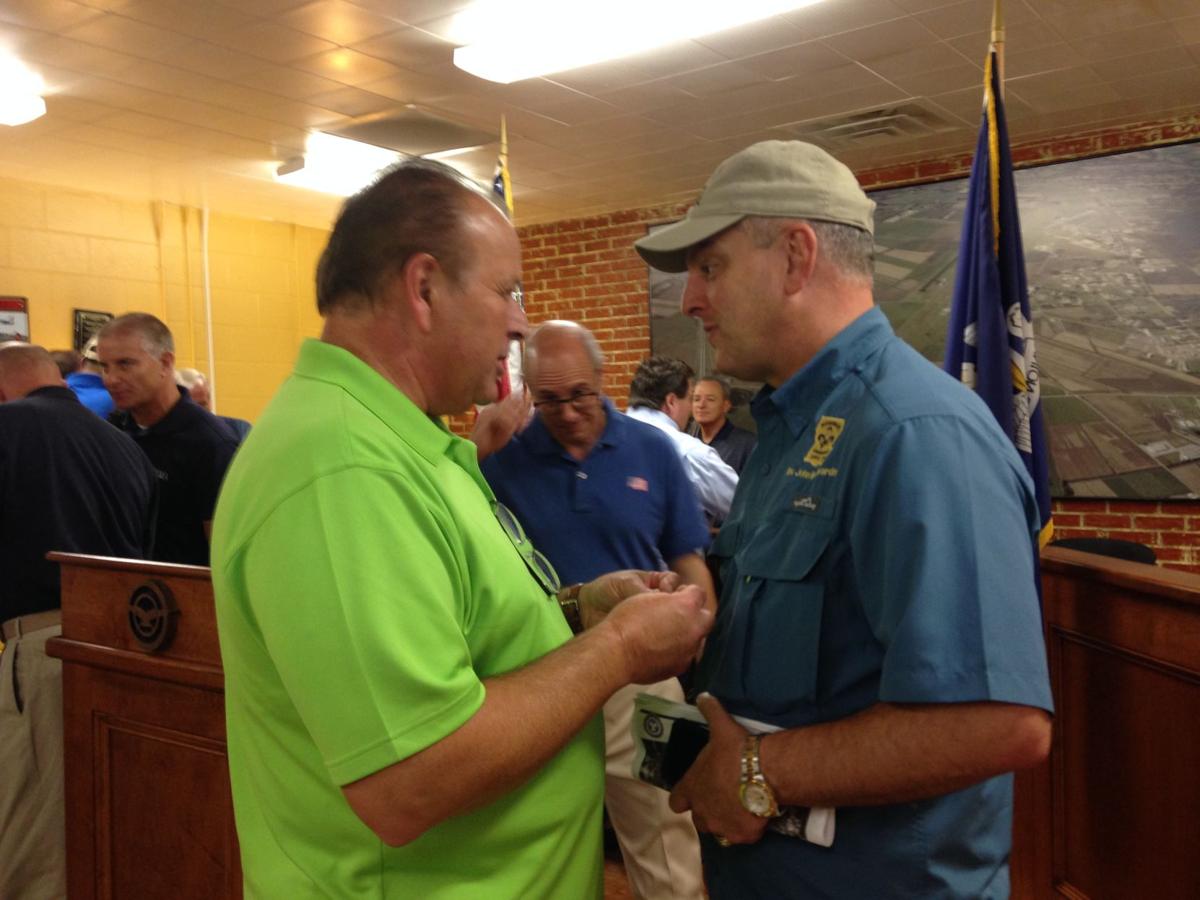 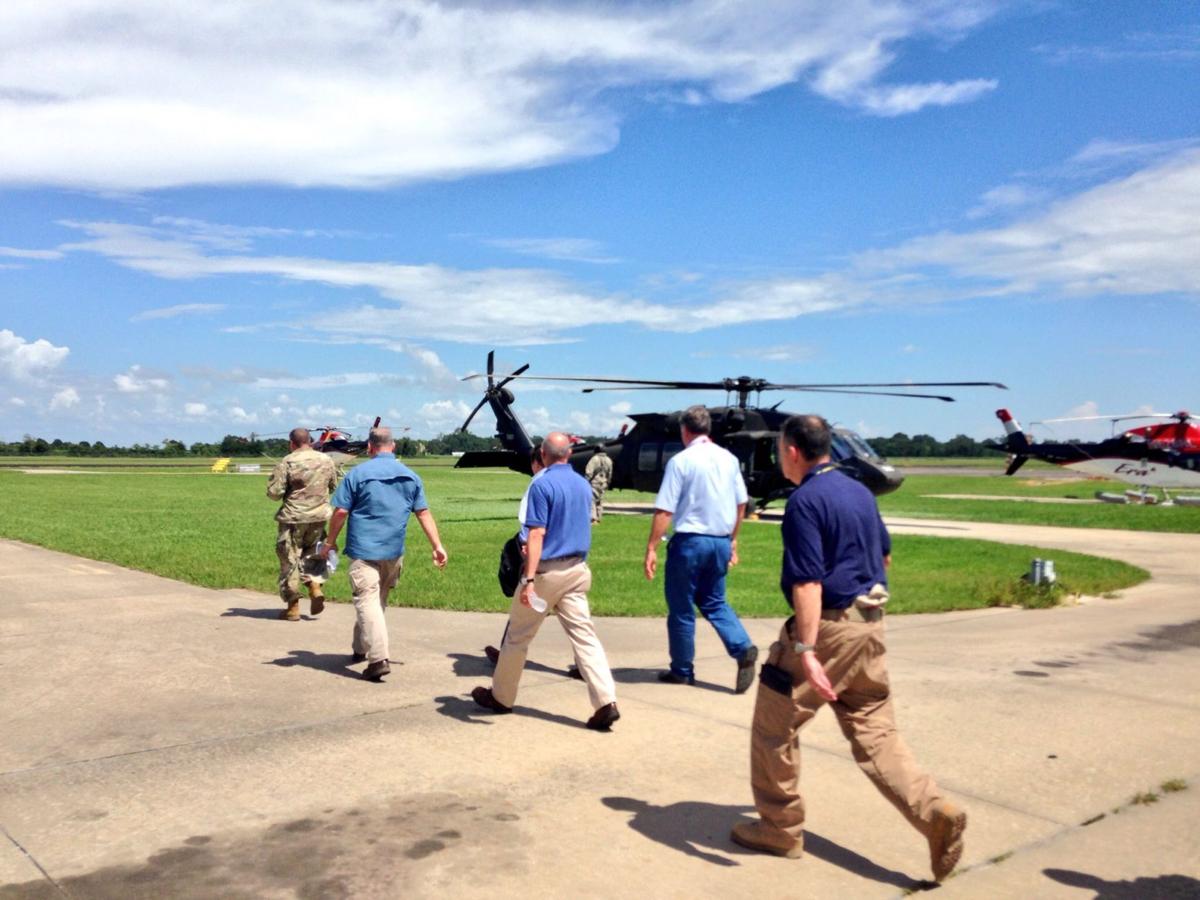 Louisiana Gov. John Bel Edwards (second from left) prepares to board a helicopter in Lafayette to continue his tour of flood-affected areas on Monday

Advocate photo by PAUL KIEU -- Gov. John Bel Edwards speaks to the press following a briefing on recent flooding conditions in Acadiana at the Lafayette City-Parish Office of Homeland Security and Emergency Preparedness in downtown Lafayette, LA on on Monday, August 15, 2016. ORG XMIT: 00052701A

Louisiana Gov. John Bel Edwards (second from left) prepares to board a helicopter in Lafayette to continue his tour of flood-affected areas on Monday

Louisiana Gov. John Bel Edwards walked across the Celtic Studios lot on Monday, shaking hands with flood evacuees now living at a flood shelter that has been set up on the film and television studio in Baton Rouge.

Several people ran up to him to shake his hand. "We love you Gov. Edwards," one woman yelled out, rushing to hug him.

It was an impromptu visit — capping a day that had Edwards stopping in Lafayette, Iberia, Vermilion and Ascension parishes to visit with leaders of areas that have been affected by mass flooding across the region.

Celtic, a privately-owned studio normally reserved for television and film projects, has become home to some 2,000 evacuees since opening its doors to victims of historic flooding two days ago.

It wasn't on Edwards' itinerary for the day, but flying high above flood-ravaged lands, Edwards decided he wanted to stop in. The two military helicopters that he and his entourage were traveling in parked on Celtic's lawn shortly before 7 p.m., greeted by crowds of people evacuees waving and clapping for Edwards.

"You have to remember: It's not a hurricane," Edwards said of the flooding that has hit south Louisiana. "It's not even a named storm."

Edwards traveled to Lafayette, New Iberia, Abbeville and Gonzales on Monday to survey flood damage and meet with local leaders, before circling back to Celtic in Baton Rouge.

"We have a state rich in generous and resilient people," Edwards said, before noting that the recovery will still take a long time. "We've still got a lot of work to do. I'm aware of that."

Flying over Ascension Parish, some neighborhoods could only be made out by roofs peaking out from the floodwater, like objects floating in a large lake.

In Lafayette, roadways had been transformed to small rivers and ponds.

"It's a totally different perspective in the air. You get a chance to see how wide it really spreads," he said when he had made it back to the Governor's Office of Homeland Security and Emergency Preparedness later that evening. "It's just devastating throughout. It doesn't discriminate — it's not white homes or black homes. It's not poor homes versus rich homes."

While much of the attention has focused on the hardest-hit four parishes that received federal disaster declarations on Sunday — East Baton Rouge, Livingston, Tangipahoa and St. Helena — the flooding has taken its toll in the surrounding areas as well.

About 20,000 people have been rescued, along with hundreds of pets, and at least three, mayb…

Securing their place on the disaster declaration, and the assistance that comes along with that, was the most common concern that local officials expressed to Edwards during their briefings on Monday.

"That's extremely important for us," Iberia Parish President Larry Richard said. "We want to be named as soon as possible."

Edwards spent time at each stop trying to reassure leaders that they would be added to the disaster declaration.

"We're working to make it happen," he said in Abbeville. "I think we're gonna get you swiftly added."

President Obama: Prayers are with the people of Louisiana in wake of flooding

President Barack Obama has been staying up-to-date on the flooding situation in Louisiana, W…

In Ascension Parish, he said, "I've been making this statement everywhere I went today ... I'm not surprised, and I'm not disappointed. We had a lot more information on those parishes at the time we applied for the disaster."

Edwards said that officials are working to update the information for other parishes and expedite their declaration approval.

"I have every confidence that we are going to get those additional parishes," he said.

Two representatives from FEMA traveled with Edwards on Monday so they could see the damage and hear from leaders in person, including Tony Robinson, the regional administrator who also worked with the state's recovery during Hurricane Katrina.

"It's important that he sees first hand," Edwards said.

Crouching down on a cement floor, Louisiana Gov. John Bel Edwards aimed to offer a comfortin…

"It appears to be quite devastating," Alario said, noting that hearing directly from local officials also was helpful. "The story they tell paints a picture."

"In each case, local government seems to be taking care of things," Alario added.

'It is our turn to help': South Carolina collecting goods for Louisiana flood victims

South Carolina is leading an effort to collect items for Louisiana flood victims, the school announced Tuesday, paying back, in a way, LSU's a…

Twenty parishes are now covered under a federal disaster declaration in response to severe flooding that has struck Louisiana.

More than $1 million has already been donated to south Louisiana flood victims through crowdsourcing website GoFundMe.